A look at Notre Dame's multiple defense without Louis Nix.

Welcome back to the Film Room. In Part 1 we looked at the basic principles surrounding Notre Dame's multiple front defense, how they deployed several different fronts, and the personnel they used in the first half of the 2013 opener against Temple.

Today we will look at the first halves from both the final regular season game against Stanford and the bowl game against Rutgers. Both games featured Notre Dame without anchor nose guard Louis Nix and the bowl game specifically saw the departed Bob Diaco replaced by Kerry Cooks for the defensive play-calling duties.

Odd Front with Rush LB Down on Ground

If you recall from Part 1 the Irish were using an Odd Front against Temple 71.1% of the time to begin the year but the use of that front dropped down to almost 47.5% in the final two contests of 2013. This is admittedly a small sample size but the loss of Louis Nix no doubt played a part in Notre Dame using less of a 0-tech nose guard late in the season.

As you would expect, there weren't many differences with the defense under Cooks in the bowl game. Besides giving safety Max Redfield his first career start and leaning on more 40 fronts things stayed pretty much the same. 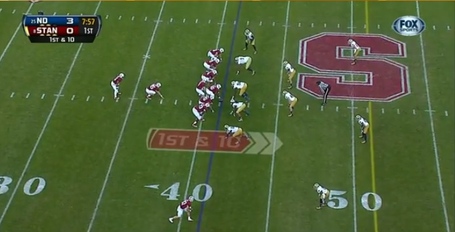 We gave an example of Notre Dame using a hybrid front (4-3 Over) in Part 1 against Temple and here again the Irish use a shift to change up their look before the snap against Stanford.

They begin in a traditional 3-4 alignment and shift into a 4-3 Under. We will go into greater detail on these 4-3 looks next week but for now just notice how the defensive line is shaded towards the weak-side of Stanford's line (the opposite side of where the tight end is lined up) and how linebackers then shifted to the strong-side of the line ending up with Jaylon Smith standing in the D-gap.

The linemen are now as follows: Shembo 8-tech off the right tackle, Day 3-tech outside the right guard, Jones 1-tech shaded off the center's left shoulder, and Tuitt 5-tech just outside the left tackle.

Stanford's power run game is on full display here. Normally a 4-3 Under is susceptible to runs to the strong side but the Cardinal appear to make an audible after Notre Dame shifts possibly because they love to pull their left guard or maybe they'd prefer to Shembo and Day's side. 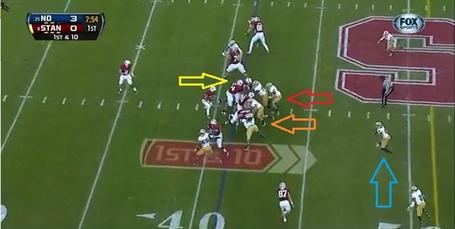 Just a few things to point out on this play. One, Stanford's pulling left guard (yellow arrow) doesn't do a great job and basically runs right into his own center. Sheldon Day does a decent job standing his ground and Carlo Calabrese (orange arrow) does a good job taking on the fullback but doesn't have outside leverage in which to have an arm free to make a tackle or force the running back to his left where Dan Fox (red arrow) should fill the cut-back lane.

This doesn't happen and the back squirts through the hole while Matthias Farley (blue arrow) is painfully timid coming down in run support. He's practically standing still trying to tackle a running back coming down hill.

WATCH THIS to see how Notre Dame shuts down a similar run play properly on Stanford's first play from scrimmage. 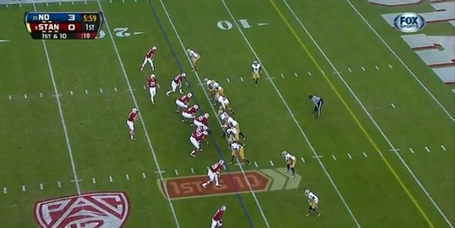 If you did the math above you'll notice there was 1 play that didn't meet the requirements for any of the tracked fronts. That's because of this jumbled mess we'll call a 7-man front. Not a single player has their hand on the ground as Stanford shows a 5 wide receiver set with their tight end flexed off the line and running back motioning back from out wide.

If you're a stickler for details Notre Dame has Ishaq Williams, Sheldon Day, Kendall Moore, Kona Schwenke, Justin Utupo, Dan Fox, and Romeo Okwara at the line of scrimmage.

Obviously, the Cardinal are going to motion the running back into the backfield and impose their will against this stacked box even though their receivers are on islands against corner, right?

Stanford is so soft. 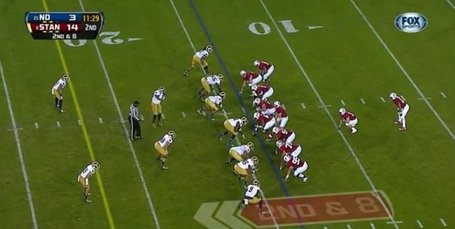 It's probably safe to assume that the Stanford game saw Notre Dame use more 40 fronts than any other game on the season. Without Louis Nix to anchor the middle the Irish needed to change things up to deal with the Cardinal power run game and excessive use of extra linemen.

On this play Stanford shows 8 blockers at the line plus a fullback and the Irish counter with one of their rare 30 front looks from this game. Jarron Jones is your 0-tech nose guard, Sheldon Day and Stephon Tuitt are at defensive end, while Prince Shembo has his hand on the ground. The others players at the line from left to right are Ishaq Williams, Romeo Okwara, and Jaylon Smith.

Not a terrible rep by a depleted Irish defense. You have to like Kendall Moore's fearlessness in filling the play-side gap and also that 8 out of the 11 players on this play will return next year. 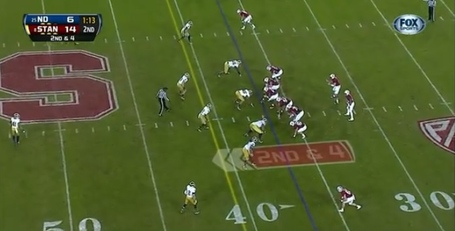 Yeah, about that depleted defense. Stanford goes to a hurry-up offense as the first half winds down and Notre Dame decides to play 258-pound Romeo Okwara at nose guard. Even though this is a 30 front the defensive ends are kicked out so wide that they are doing nothing but pinning their ears back and getting after the QB.

It's pretty shocking that Stanford didn't audible into a run to their tailback here even with just over a minute left in the half. That probably would have netted at least 10 to 15 yards if not more. 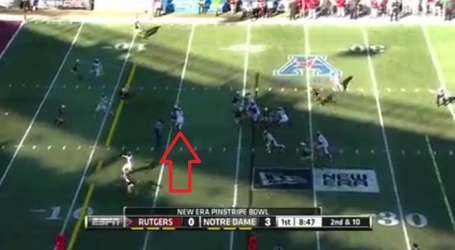 One of the things that stood out to me while watching over 100 snaps of the defensive line was how much of a step back Kona Schwenke was from Louis Nix (and even Jarron Jones) on the interior. As a 300-pounder Schwenke was pushed around far too often. That red arrow is Schwenke being mauled 6 yards past the line of scrimmage against Rutgers.

Notre Dame does a terrible job containing the option read--and the Irish were fortunate the quarterback slips--but Schwenke simply cannot be abused this badly on the interior.

What sticks out to me with these snap counts is how little Tuitt was used on the interior without Nix in the lineup, how much Day was asked to work inside in 40 fronts, how much more Shembo worked at defensive end in 40 fronts, how little Ishaq was used up front in general over the final two games, plus the obvious data points of Jones taking nose guard reps away from Schwenke. Clearly the staff lost some trust in Schwenke as a 0-tech nose guard as his NG to DT ratio was basically flip-flopped from the first game.

Thoughts on the Future

There will be Fewer 30 Fronts

It might not be a huge percentage drop and the game-plans of opponents will continue to dictate the fronts used but this may be the first of a multi-year process where the Irish slowly switch the base defense from 3-4 to the 4-3. Early practice reports this spring indicate 40 fronts are being used heavily so it's clearly happening.

I expect Jarron Jones to perform quite well as a 0-tech nose guard and I was pleasantly surprised by his abilities re-watching a bunch of tape. He's a bulky gap eater (310 pounds) who they can rely on in 3-4 looks but the rest of the roster really fits the 4-3 better.

Ishaq Williams the Key to 2014

If the beginning of spring practice is any indication we're not going to see Ishaq Williams dropping back in coverage that much anymore, if at all. As expected, Ishaq was working with the 1st team at defensive end in 40 fronts but he was also working at the same position in 30 fronts as well.

This could be a spring solution and nothing more but there are 4 other options at defensive end (Rochell, Hounshell, Matuska, Trumbetti) so it's not like Ishaq is simply there by default. If Ishaq is a full-time defensive end now he'll be an enormously huge piece to the defense as he'll play a ton of snaps. He will have to do what Tuitt often had to do in the past: Eat blocks one snap and be a premier pass rusher the next.

The Rush Linebacker will Drop Less

Out of the 106 plays tracked for this series the rush linebacker dropped just 18 times or 16.9% of the total snaps. That's not a lot of drops but I still expect that percentage to go down with more 40 fronts and also with more nickel/dime coverage on passing downs with the plethora of experienced defensive backs on the roster.

Take the above screenshot with Okwara at nose guard, for example. You have 4 linebackers weighing 230, 245, 251, and 261 respectively standing up on the second level. Even though the defense was in a pinch due to the hurry-up from Stanford, I expect Brian VanGorder to make a concerted effort to rely on more defensive backs instead of Okwara or Ishaq dropping back in coverage.

Replacing Production at Defensive End with Speed Will Be a Focus

If there's more of a focus on 40 fronts this fall then the Irish will have to replace the production that is lost from last year. Here are the snap counts for defensive end in 4-3 looks from our sample size:

Ishaq got some solid reps but the exit of Shembo and Tuitt leaves a big hole in experience for these fronts. Although there is still plenty of size on the roster, leaning on sleeker athletes like Williams, Okwara, Hounshell, and Trumbetti as speed rushers could be a focus in 2014.