Without further ado, we bring you the results of the last week's match-ups.

No. 10 Irish hockey (23-13-2, 12-10-2) won 2 of 3 to claim their Hockey East tournament quarterfinals series against no. 2 Boston College in Chestnut Hill this past weekend. Notre Dame wrecked the Eagles in the series opener on Friday, 7-2, before BC tied things up with a 4-2 Saturday win. On Sunday, the Irish clinched the series with a 4-2 victory.

First Down Moses has a full recap of the series for you here, rife with GIFs and highlights from all 3 games. Evan Sporer at SB Nation's college hockey site has a detailed recap of the crucial game 3 here.

Here are the highlights from game 3:

The Irish will face University of Massachusetts - Lowell in the Hockey East tournament semifinals this Friday evening (5:00 p.m. ET, WatchND). The winner of that match will face off against either Providence or New Hamshire in the Hockey East tournament final on Saturday at 7:00 p.m. ET (WatchND, NESN Plus/NBCSN). Whatever happens, the Irish are just about guaranteed a spot in the upcoming NCAA tournament.

No. 11 men's lacrosse (3-2) earned a dominant win over no. 7 Virginia on Saturday, 18-9. Senior midfielder Liam O'Connor now ranks 1st in the nation in faceoff winning percentage (.701). Paul Rigney has a recap of the weekend victory for you, as well as a look at ND's success in winning face-offs, right here.

The Irish will not play again until next Tuesday, when they'll meet Ohio State on the road.

This Wednesday, the Irish welcome Marquette (6:00 p.m. ET, WatchND). They'll face Villanova on the road on Sunday at noon.

Notre Dame's track & field team competed in the NCAA Indoor Track and Field Championships in Albuquerque, N.M., this past weekend. The men's squad finished 17th in the country and the women's squad, 29th. The Irish earned national top-10 finishes in the men's mile, the 400m dash (2), the 4x400m relay, and the women's 60m hurdles. Congratulations to Notre Dame track & field on a strong indoor season. Now on to the outdoor season.

Baseball (6-12) struggled this past week, earning a tough extra-inning win over Appalachian State, 13-9, after a 9th-inning rally, then dropping a 3-game series against Duke on the road. The Blue Devils won the first meeting of the teams in extra innings, 4-3, then bested the Irish in Saturday's double-header, 4-1 and 1-0.

This Saturday, the Irish welcome Pittsburgh for a double-header (12:00 and 2:00 p.m. ET, WatchND). The teams meet again on Sunday at noon ET (WatchND).

The Irish will face Virginia on the road this Friday, then North Carolina on Sunday in a rare televised match (12:00 p.m. ET, ESPN3).

Next up for the Irish is a visit to Clemson this Friday, then a trip to Atlanta to face Georgia Tech on Sunday.

Irish rowing got back to it at the Oak Ridge/Cardinal Invitational this past weekend in Tennessee. The team earned 6 race wins in 2 days on the water.

Both Irish golf teams began spring play over the past few weeks. The men's team earned a 7th-place finish at the San Diego Classic last week then tied for 3rd overall at the Talis Park Challenge. Two players finished in the top 10 at the latter.

The men's team will head to the Lone Star Invitational in San Antonio next Monday.

The women's team claimed an impressive 2nd-place finish at the Clover Cup this past weekend, and Kristina Nhim came in 1st overall with a 3-round score of 213, 3 under par. They next participate in the LSU Golf Classic in Baton Rouge beginning this Friday.

After no. 2 women's basketball (32-0) claimed the ACC Tournament Championship a week ago, they awaited Monday night's news that they had been selected as a no. 1 seed in the NCAA Tournament.

The NCAA released this graphic showing the team's path to the final four through @NCAAWomensBKB: 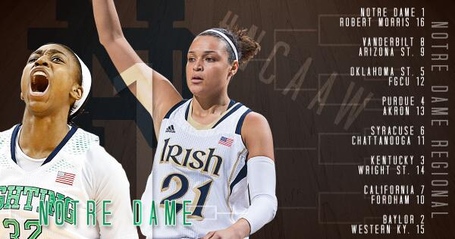 In the first round of tournament play, the Irish will face Robert Morris in Toledo (Saturday, 1:30 p.m. ET, ESPN, NCAA Central). If they advance, they'll face the winner of Vanderbilt-Arizona State in the second round on Monday (time and location TBA).

Men's basketball (15-14, 6-10) fell to Wake Forest in the 1st round of the ACC tournament this past week, 81-69, bringing a tumultuous season to an end. JoeSchu recapped the loss for us here. You can read alstein's post mortem on the season's turning points here.

Notre Dame fencing was away from competition this week as they continue to prepare for the NCAA Championships on March 20th-23rd. The Irish will send 10 fencers to the tournament at Ohio State. Best of luck to them this weekend.

Both Irish swimming & diving squads - the no. 20 men (7-5-1) and no. 24 women (8-5) - were mostly idle this past week, though 3 Irish divers qualified for the NCAA tournament at the NCAA Zone C Diving Championship.

Eight members of the women's squad will travel to Minneapolis this Thursday as the NCAA Championships commence.