In this session of Iso Cam we compare Everett Golson and Malik Zaire throwing the ball.

The quarterback position at Notre Dame is one of the most scrutinized in all of college football. With Everett Golson suspended from school and Malik Zaire battling mono as a redshirt freshman, there was little to scrutinize on the football field in 2013 . On March 3, 2014 that changed. Spring practice began.

When I watched the video from Notre Dame's first practice a few things stood out to me relative to the quarterbacks.

Let's take a look at the film and examine some of the subtle, yet important differences in Zaire's and Golson's throwing motion.

Side by Side Comparison 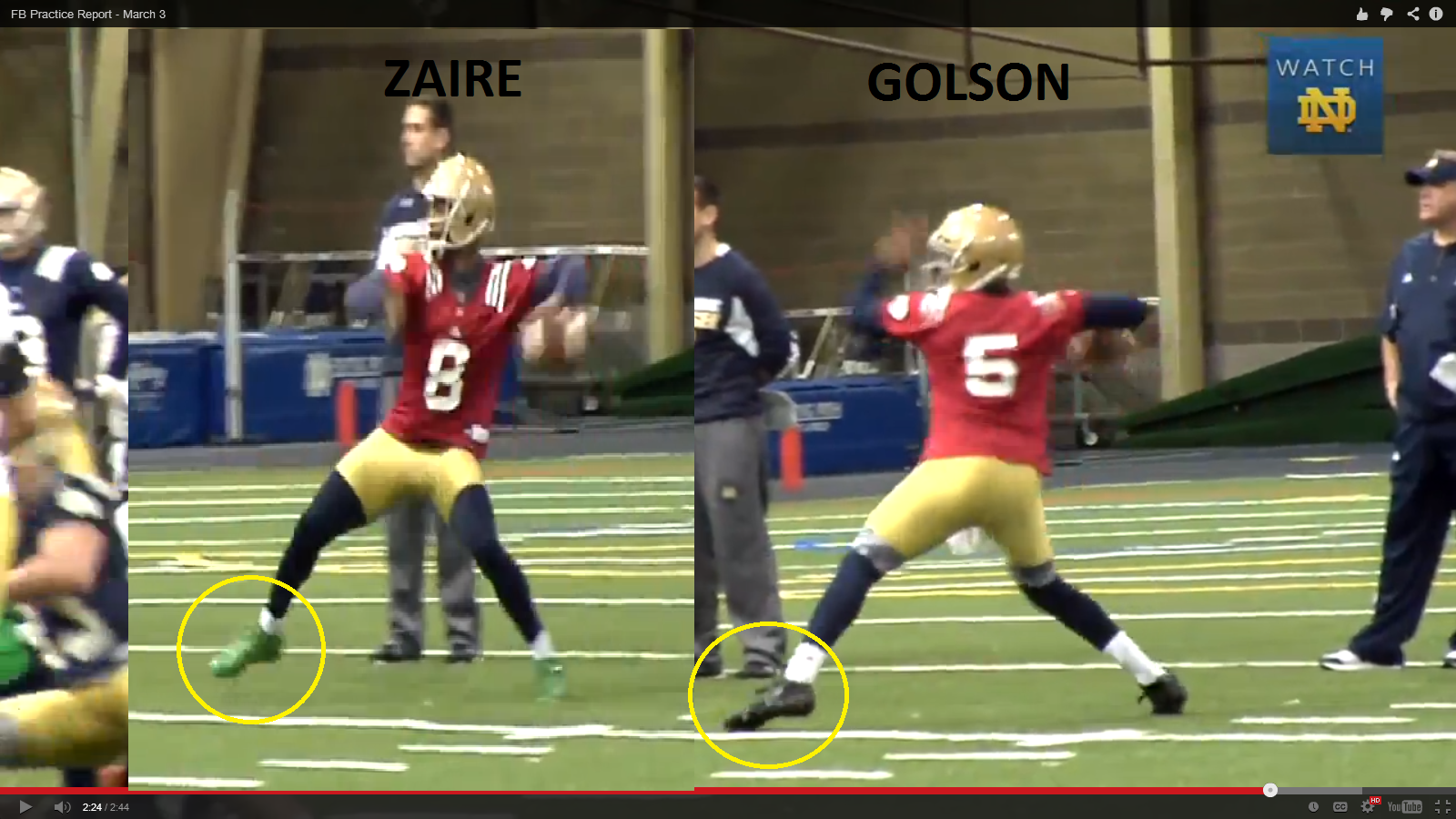 This may seem counterintuitive, but whenever we talk about quarterbacks throwing the ball, the first thing to consider is their feet. This is the foundation of the throwing motion, if the feet are wrong the rest of the throw is impacted.

Take a look at each QB's front foot (yellow circle). Golson is in a slightly better position. At this point in the throwing motion the quarterback should be shifting his weight from the back foot to front foot. Zaire is a little behind in his weight transfer and doesn't have his front foot on the ground yet.

While this may seem like a minor difference, it tends to have a significant impact on the throw. Typically, if you are late on your weight transfer you throw the ball high. 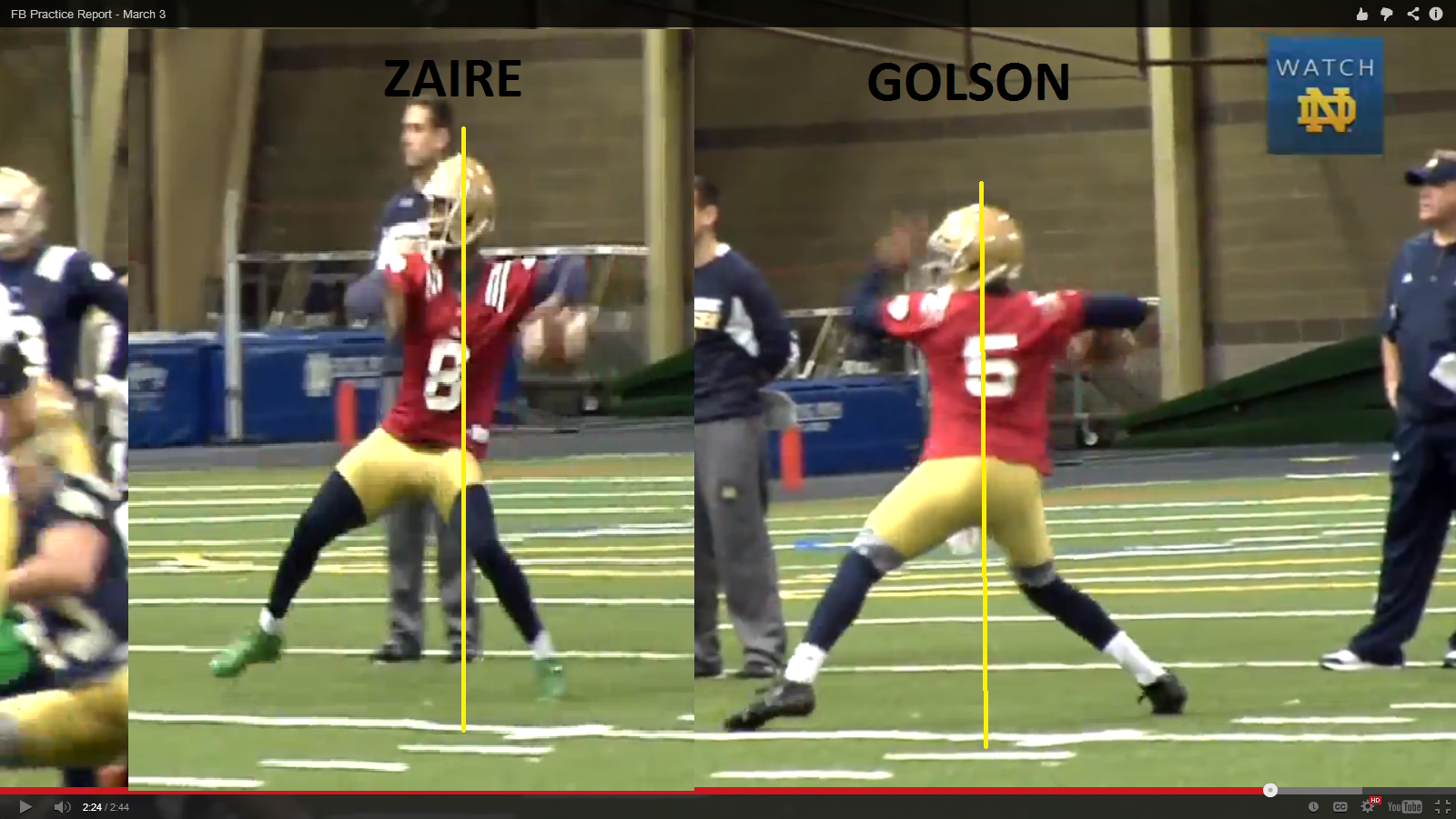 The yellow line goes through the crown of both quarterback's helmets. Golson is in a stable, balanced position. Zaire isn't as balanced, he's leaning back. Again, this body position often leads to throwing the ball too high. 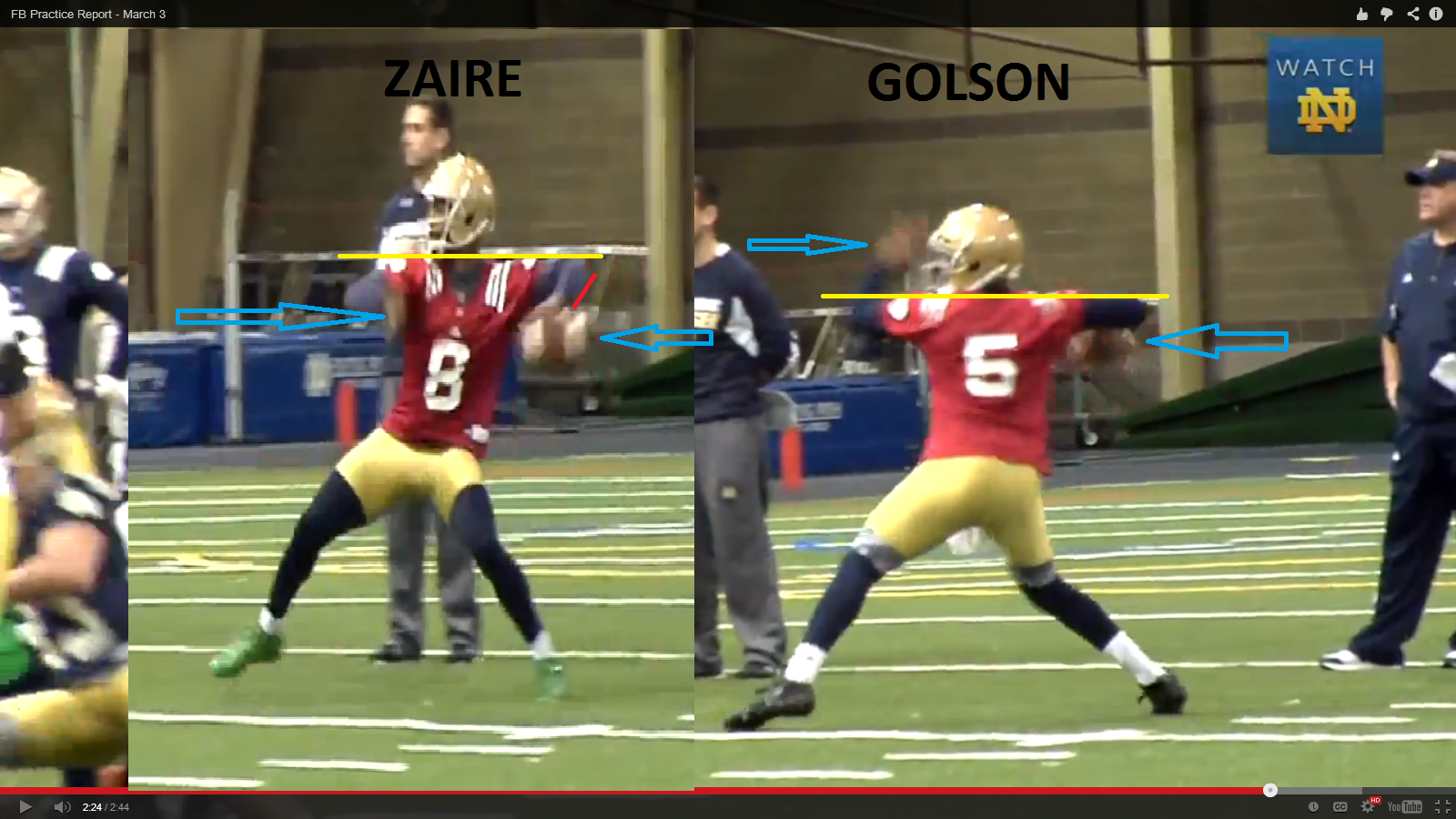 I like the positioning of both quarterback's shoulders. They are fairly level and in-line with the elbow (yellow line).

As the blue arrows show, Golson keeps the ball and his lead hand a touch higher than Zaire. This is a sign that Golson spent plenty of time during his suspension working on technique. Quarterback coaches are obsessed with keeping the ball high when transitioning into the throwing motion.

Notice the red line on Zaire's arm. It isn't overly pronounced here but Zaire has a tendency to let the ball drop as he progresses through his throwing motion. We'll take a more in-depth look at this tendency in a bit. 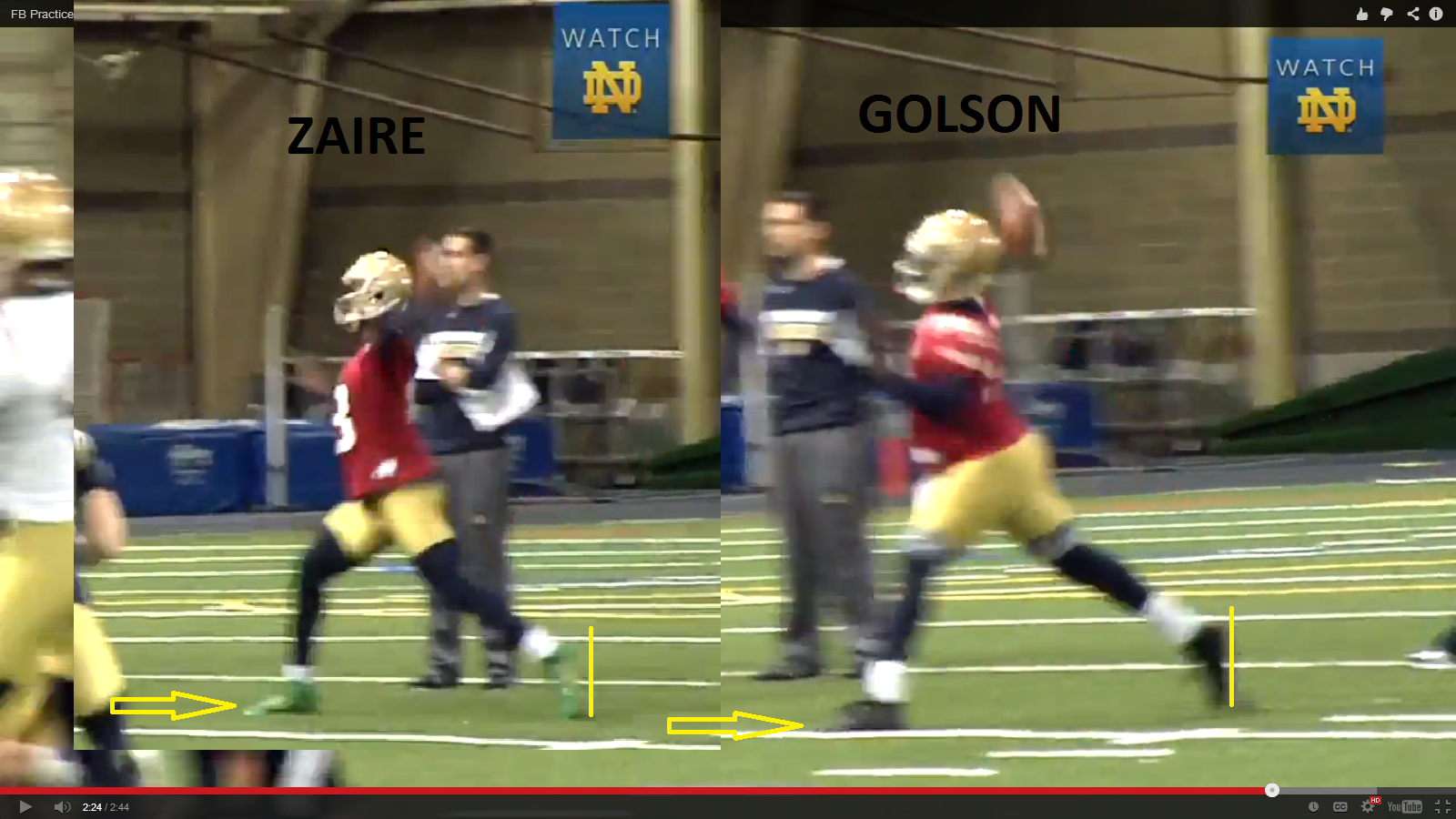 A fraction of a second later. Again, let's start with the feet. Both QB's have their front foot planted and pointing towards the target. This is good technique by both guys.

There is a minor difference in the back foot. You can see Golson's foot is close to straight up and down, aligned with his body and moving in the direction of the throw. Zaire's back foot is a little less vertical and tilted off to the side. Ideally you want to have your entire body in sync, working together to generate power and accuracy. Golson's foot placement is a little more refined and efficient by comparison. 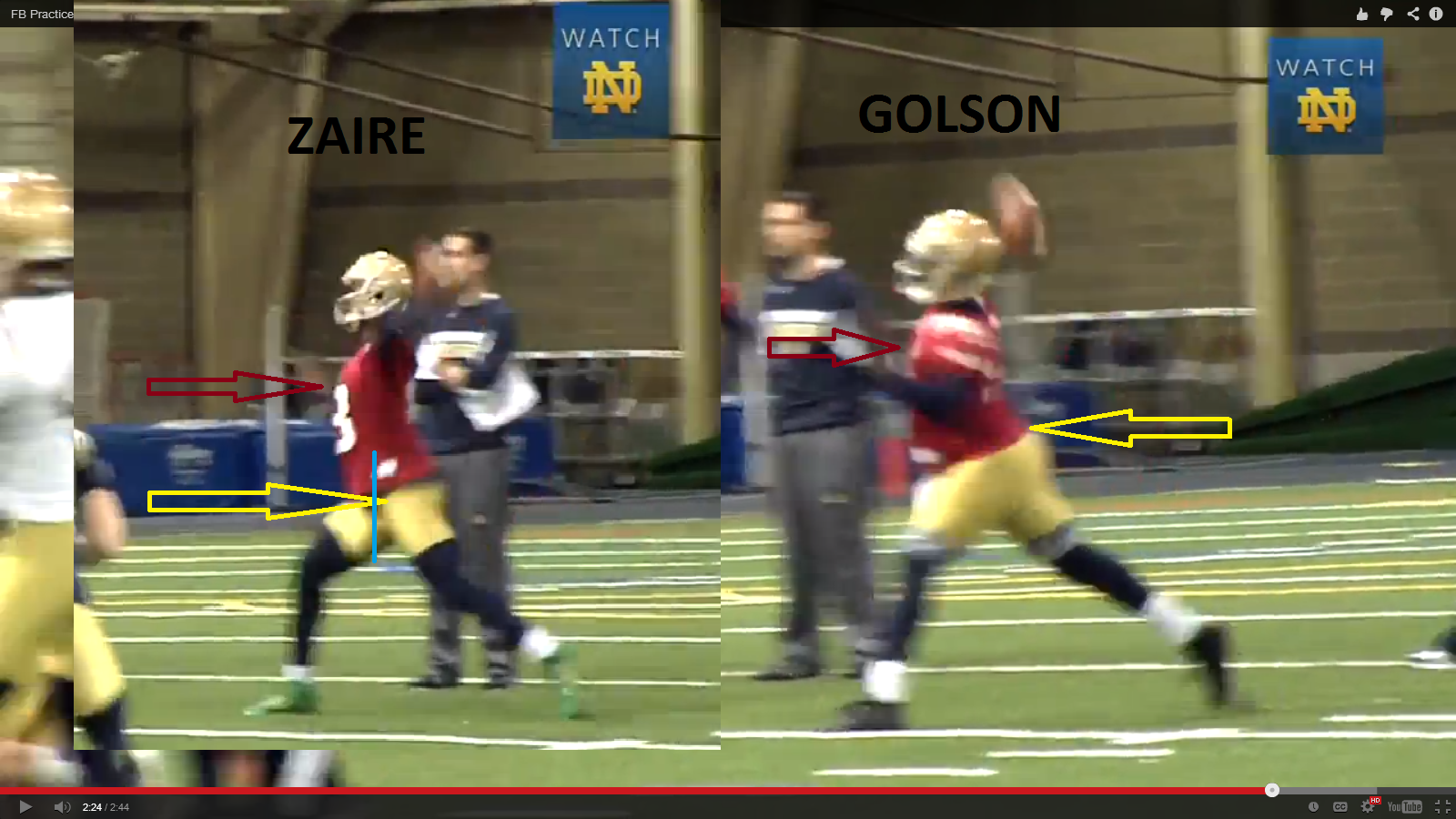 See how Zaire's chest (crimson arrow) appears to be sticking out more than Golson's (crimson arrow). This is not a function of the camera angle, rather it is a function of Zaire's late weight shift. Because he was late, his torso and hips are out of sync. Zaire's left hip (yellow arrow) should be a little further towards the target (roughly where the blue line is).

It's hard to see, but Golson's right hip (yellow arrow) is more effectively aligned with his torso. This will allow him to get the maximum combination of power and accuracy out of the throw.

Here's a chance to watch both of these throws at full speed. Although the patterns they are throwing are different, the mechanics required to make these throws are virtually identical.

Watch the ball flight for each quarterback. Golson's is a thing of beauty. Zaire's throw is a bit high. 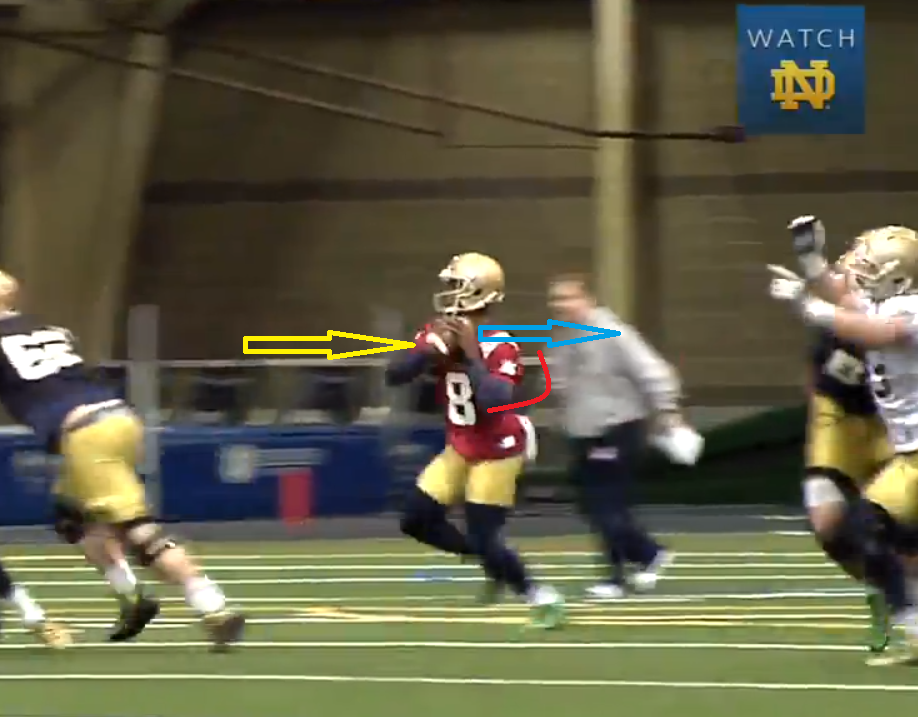 Zaire is rolling to his right. The ball is in good position, nice and high (yellow arrow). As Zaire throws, the ball should travel straight back (following the blue arrow). At the same time Zaire's elbow should come up, (following the red curved line) and end up close to parallel with his shoulder. 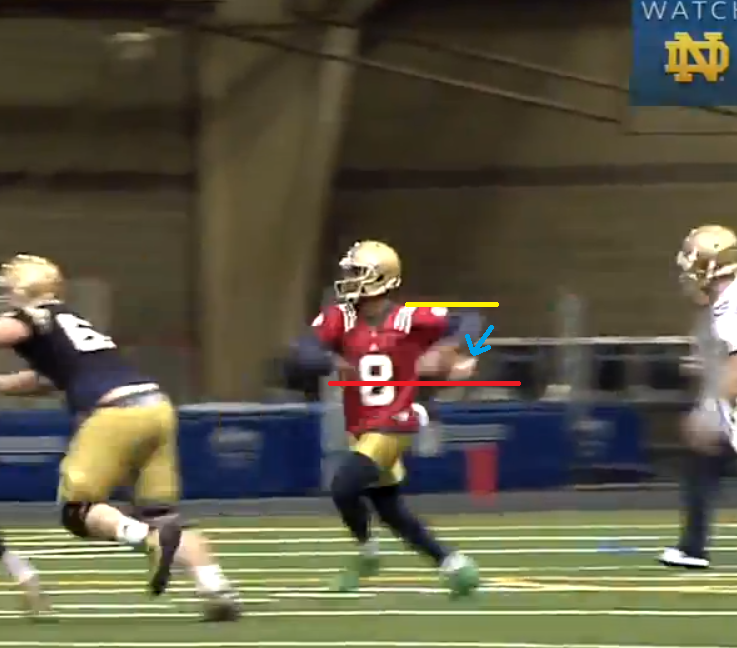 Zaire's elbow and shoulder are perfectly aligned (yellow arrow). Where his technique falters is the way he is holding the ball. As previously mentioned he has a tendency to let the ball drop as he starts his throwing motion (red line). More specifically, Zaire's forearm shouldn't be angled this much towards the ground (blue arrow). Am I nitpicking? Yes. Does this little glitch matter? Yes.

It should be fun to watch these two quarterbacks progress over the spring and into next year. There is little doubt that Everett Golson and Malik Zaire are talented players. At this point, Golson is ahead. His throwing mechanics are smooth and efficient. By comparison Zaire isn't quite as polished. He is a little less efficient and less consistent. This is to be expected from a redshirt sophomore. Overall, there is a lot to like in the throwing motion of both these quarterbacks. If everything goes as planned we should have a pretty good 1-2 punch at QB in 2014.