Notre Dame has been a base 3-4 team under Brian Kelly, recruits say we're moving to a 4-3, and the head coach says the defense will remain multiple. We explain.

There's been a lot of discussion lately about the changes to Notre Dame's defense and what is going to happen with the graduation of three-year starting nose guard Louis Nix. The base defense for the Irish for the past 4 years has been the 3-4, but incoming recruits keep saying the defense is moving to a 4-3, while head coach Brian Kelly has insisted the defense will remain multiple in using both fronts under new defensive coordinator Brian VanGorder.

What we wanted to do is give a nice broad explanation of how Notre Dame has used both fronts in the past and spark some discussion on what we'll see in 2014 and beyond. For this Part 1 we will look at the first half of the 2013 opener against Temple, and in the final Part 2 we will look at the end of this past season both with a Diaco-led team at Stanford and a Diaco-less team in the Pinstripe Bowl. Since Nix went down with an injury in 2013 we'll see what things were like with him in the lineup for Temple and then what life was like without Irish Chocolate later in the season.

First off, we're going to keep this simple. We're not going to get too bogged down on whether players are 1-gapping (primarily penetrating upfield) or 2-gapping (taking on blocks, double teams) although it may be pointed out at times.

We will primarily focus on the front-line players and for Notre Dame that includes: nose guards, defensive ends, defensive tackles, and outside linebackers.

BK - we will be four-down and three-down on defense depending on who we are playing from week to week.

There were 47 defensive snaps in the first half against Temple and I was able to track 45 of them. The NBC feed didn't cut back to the action prior to the snap on one play and another was a QB spike right before the end of the half that I didn't count.

This is the main question we want to tackle today. A different way to ask the same question is whether Notre Dame is using an odd or even front. On a very basic level, a 30 front has 3 down linemen and is odd because the opposing team's center is covered--meaning a defender is face-to-face directly across the center in what is called a 0-tech. The 40 front has 4 down linemen and is even because the opposing center is not covered. 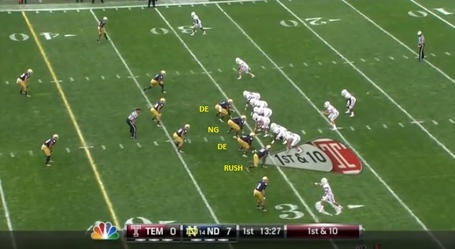 If you had to take a picture of the classic Bob Diaco Notre Dame 3-4 defense this would be the choice. Louis Nix is your nose guard in a 0 technique directly across from the center. Both of the ends are just outside the opposing tackles (5-tech) while Prince Shembo is the outside rush linebacker standing up on the edge of the line.

During the first half against Temple the Irish ran this odd front for 32 snaps, or 71.1% of the time. 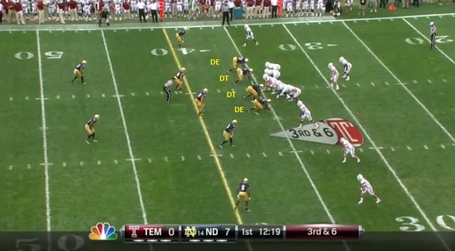 Here is Temple from their first drive after a penalty backs them up into a third & long. The Irish switch to a nickel defense (that's #36 true freshman corner Cole Luke standing near the field-side hash marks) but they also move to a 40 front as well. 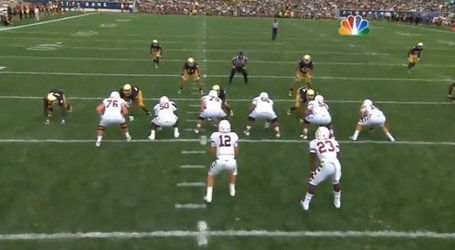 This odd front is basically a 30 front except the Rush linebacker has his hands on the ground instead of standing up. It's still your classic 3-4 defense with nose guard directly over the center and defensive ends over the tackles. This formation was included in the 32 snaps of the 30 front count made above.

On the 22 snaps in which the Rush LB was standing in a 30 front the player dropped back in coverage on 9 plays. A full 8 of those came from Prince Shembo with just one by Ishaq Williams. Although to be more accurate, Shembo dropped back in coverage on the last 4 snaps of the half when the Irish were basically in prevent defense, so he wasn't dropping back very often through most of the first half.

Another way to look at this is that Notre Dame rushed 4 players among the linemen and rush linebacker on 36 of 45 snaps (80%).

Of course, the Irish are capable of running several other fronts based off their versatile multiple look defense. Here are some other fronts from the Temple game. 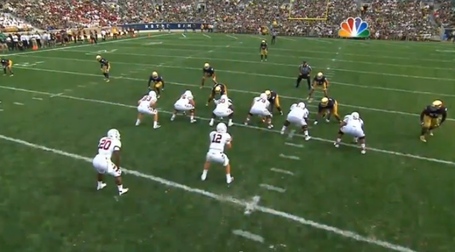 This above screenshot is what is commonly called a Bear Front and Notre Dame likes to use it out of their 3-4 alignment. Once again, the nose guard is heads up on the center but the defensive ends have shifted toward the ball and are now essentially 3-tech defensive tackles shaded towards the offensive guards in the B-Gap.

The Irish have walked up both outside linebackers to the line of scrimmage in a formation that they like to blitz out of--particularly run blitz--which they will do on this 3rd and 3 with Temple threatening to enter scoring territory.

(click on the video progress bar if it doesn't immediately play. You should see the pink filling the gray bar)

We're not focusing on the back 7 of the defense, but nevertheless this is a good play to show the need for stout line play and proper blitzing. Nix is doubled, pushed back, and does a 180 towards the ball carrier. Not a good rep by Irish Chocolate. Worse still, Day gets pushed to the ground and Shembo takes himself out of the play with a wide rush. Calabrese comes downhill with vigor but for naught as Nix gets in his way and the ball carrier hits the other hole.

Tuitt does a nice job beating the tackle upfield and re-routing the running back but Jaylon Smith can't come off the tight end block and Dan Fox isn't aggressive enough and is a step slow to fill the cutback lane. The result is contact on the ball carrier 2 yards past the line of scrimmage which allows Temple's only scoring drive of the game to continue. You can imagine if Manti Te'o were still at middle linebacker how this play might have turned out differently. 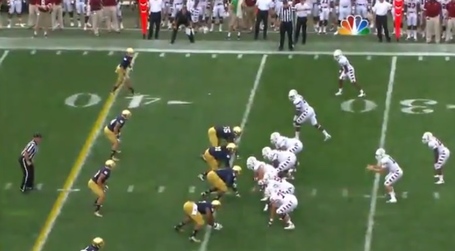 This screenshot shows the versatility of Notre Dame's multiple front defense. A second prior to this snapshot the entire line was in a 30 front. Nix was over the center, the ends were over the tackles, and Shembo was standing up off the right tackle's outside shoulder.

After a quick shift, they've moved into a 40 front: Shembo puts his hand on the ground just outside the right tackle, Day moves in over the right guard, Nix is tilted and shaded off the center as a 1-tech, and Tuitt is also tilted and moves off the edge to the outside shoulder of the left tackle.

Not only does this show the versatility of switching fronts, but it also is a clear example of the Irish being able to mix 1-gapping and 2-gapping in the same play. This is the definition of a multiple front and hybrid defense. The New England Patriots and Seattle Seahawks have been the poster children in recent times for this type of flexibility--and Kelly has mentioned in the past how the Irish use some of their concepts--but this is really becoming common at the college and pro level.

It doesn't take a brain surgeon to notice that Temple has a dilemma on their hands. Nix' alignment forces a double team with the center and left guard but that allows Stephon Tuitt to go 1-on-1 with the left tackle. Nice play-call by Diaco to let Nix 2-gap and Tuitt 1-gap but it's an even better play-call by Temple to neutralize this with a quick screen. 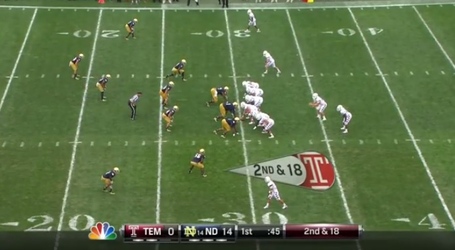 This screenshot is another variation of the 30 front but with outside linebacker Prince Shembo (at the tip of the 2 & 18 field graphic) standing up in pass coverage.

It will be interesting to see if Brian VanGorder continues this practice of using a heavy 260 pound outside linebacker in space or if he defaults to nickel coverage on obvious passing downs like this play.

Here is the breakdown by player and position for snaps in the first half of this game. We'll get into the personnel in more detail with the second part of this series. All interior linemen in a 40 front are considered defensive tackle.

Here are the pairings at defensive end when the Irish went to a 40 front:

In Part 2 we'll see how the personnel changed without Nix in the bowl game, how that affected the use of each defensive front, while discussing the future of the defense in 2014 and what Brian VanGorder might do differently.