TSW is looking into the possibility of selling all this snow to Floridians at $0.03 per cubic meter. Hey, we need to keep the lights on somehow, right?

What comes to mind when you hear the magical words, "Spring Break"? The prospect of leaving your books behind for an entire week and being magically free from homework? Packing the kids into the minivan and going for a nice little vacation? Getting the h-e-double-hockey-sticks out of the frozen, snowed-under Midwest and relaxing on a warm beach in Miami?

Since this is a family site, yes, that's what we here at One Foot Down are also picturing. However, we also know that just because Notre Dame is on Spring Break doesn't mean that the wild and wacky world of sports is on hiatus as well! As evidenced by last week's Trick Shot (Ash) Wednesday, our Commentariat's wits have managed to survive the brutal winter chill. Here are the winners:

--CleverScreenName's work of art that would've made da Vinci spin in his grave proud as punch. 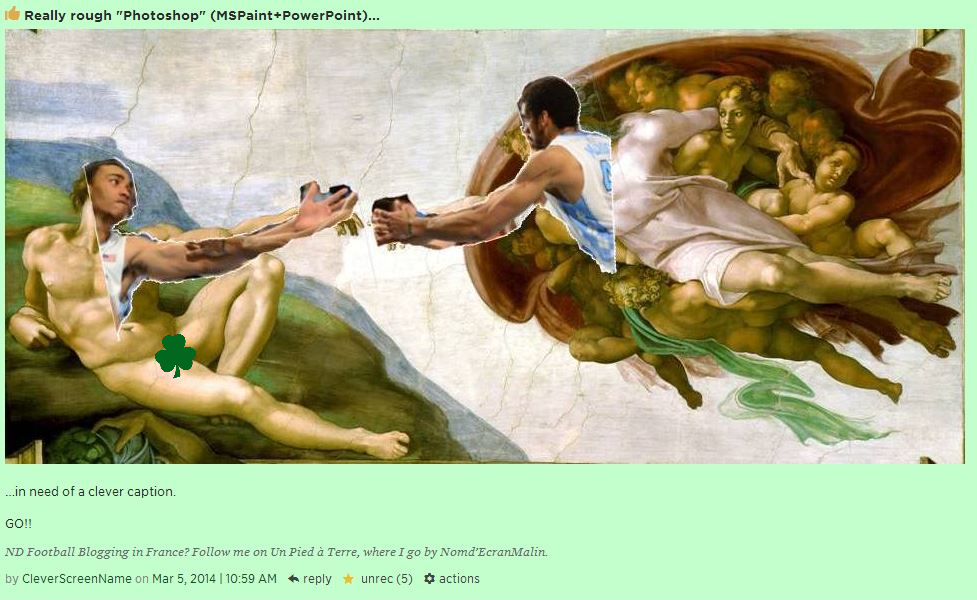 --ICB came out of nowhere and surprised all of us with a hitherto-unseen connection to a certain beloved football player.

--Honorable mention to that Eric Murtaugh schmuck for eliciting both chuckles and groans from the Intelligentsia. Or the Commentariat. Whatever. [Ed. note: We apologize to all you students who thought you were safe from having to play HISTORY on Spring Break.] However, if E's measure of "literacy" is "the ability to peruse, comprehend, and reply to a 30-million-word wall of text in less than 7 minutes", then we're all done for.

Commentariat, I am disappoint. (With the lack of beards, I mean. The captions were their usual stellar selves.)

As we've mentioned before, since this is the offseason, we'll be experimenting with a lot more entries outside the Notre Dame family. And for your captioning pleasure, this week's TSW features Duke fans Tony Ro-- [Ed. note: Sorry, I just threw up in my mouth a little bit. I'm fine.] --Duke fans Tony Romo and Jason Garrett (Dallas Cowboys QB and coach, respectively) enjoying the action versus North Carolina. For the sake of creative imagination, let's say the three guys they're standing with are (L-R) Paul, Brian (Paul's half-hidden little brother, possibly a hobbit), and Mario. Any idea what Tony's whispering/pointing out, or perhaps what the thoughts racing through bystanders' heads are? Well, then go do your thing, people.

And since last week's poll was such a hit (and since it seems that you guys haven't become tired of them after that huge TSW tournament had, like, 8 million polls to answer), we'll try something new and toss one in every week. Check it out below!