A preview of a game in November using film from 2004

Share All sharing options for: OFD Films: Brian VanGorder's Defense Against the Option

Bob Diaco did plenty of Good ThingsTM as defensive coordinator at Notre Dame. But one of his weaknesses (besides SEC teams from the state of Alabama) was the spread option offense of the service academies. Though Notre Dame was 6-1 against the academies, Diaco's defense laid a few clunkers, most notably in 2010 against Navy and this past season against Air Force and Navy.

Not much is known about what kind of defense Notre Dame's new defensive coordinator, Brian VanGorder, will field, but we can look at film from his time at Georgia and wildly speculate. In 2004, Georgia played Georgia Southern - an option team - so we can look at the film to get an idea of what we might see on November 1 when the Irish take on Navy.

First, some background. Georgia Southern finished the 2004 season 9-3, leading Division 1-AA (as it was known back then) with 370 rushing yards per game. The Eagles were led by Mike Sewak. Sewak was Paul Johnson's offensive coordinator at Georgia Southern and became head coach when Johnson left for Navy. Sewak suffered from Frank Solich Disease and was fired after the 2005 season despite a 35-14 record because of a lack of postseason success. His replacement? Brian VanGorder.*

For the game, Georgia won by a score of 48-28, though it was 41-14 late in the fourth quarter. Georgia Southern managed 294 yards rushing at 4.7 yards per carry. For context, Navy ran for 331 yards against Notre Dame this season, also at 4.7ypc.

Unfortunately, we don't have the entire game, but you can watch a highlight video below. I suggest watching it on mute.

These are Georgia Southern highlights so it mostly features big plays for the Eagles, but we can still see how VanGorder defended the option.

Georgia spent most of the game in a 5-2 alignment. 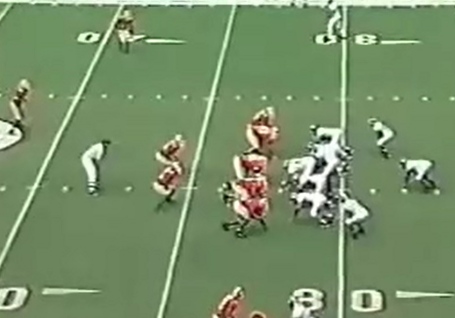 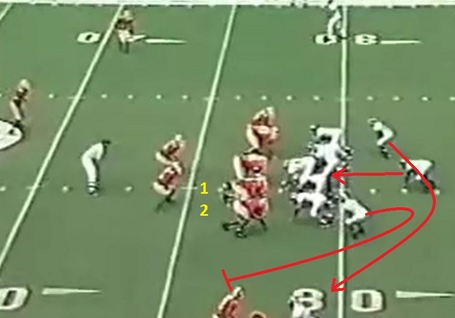 Three(!) players converge on the B-back with one of the middle linebackers running in to help as well (yellow circle). That's four players covering the dive. 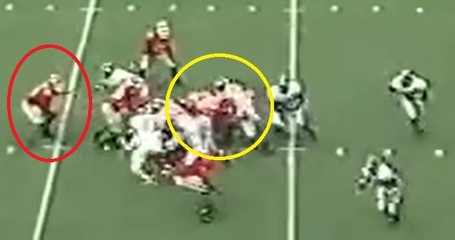 The player with the red circle is the other middle linebacker. He just kind of stands there as a Georgia Southern lineman blocks him. For those keeping score, that's one linebacker needlessly running to help three other players tackle someone that doesn't have the ball, and one passively watching the play happen.

This is similar to the problem the Irish had against Navy last season.

Watch the whole play and pay attention to the middle linebackers.

Ok, enough about the linebackers. We can see a few adjustments VanGorder made in this game.

First, VanGorder had his corner blitz off the edge 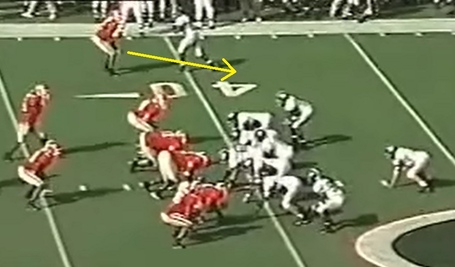 Georgia Southern used a common counter to this strategy. They had the wide receiver run into the empty space between the corner and safety and the quarterback threw a quick pass to him.

Watch the whole pay below.

In the first play of this post, I highlighted how Georgia got outflanked on the edge. In this next play, VanGorder has the safety help out on run support more aggressively.

Here's the play before the snap. 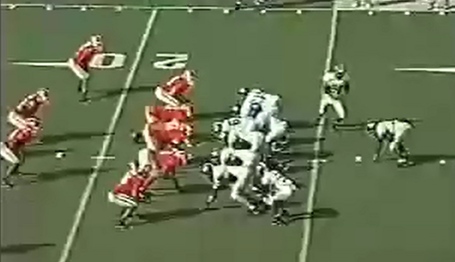 After the snap, you can see the safety flash into view. 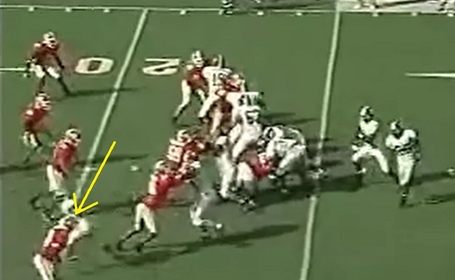 Unfortunately, this was a pass and no one covered the A-back out of the backfield. 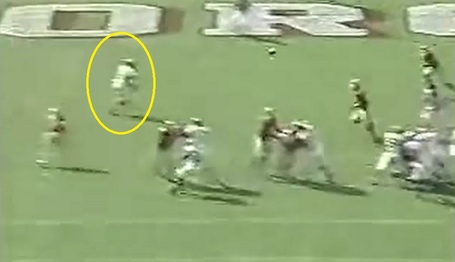 This is almost the exact same play Navy used to score their last touchdown against Notre Dame last year. To be honest, this video looked a lot like Notre Dame's game against the Midshipmen. The three plays I covered in this post are almost exactly the same as three of the plays I covered in my Navy Review post.

This style of defense is "bend but don't break" taken to an extreme. The offense can get 4-6 yards whenever it wants, and the defense has to count on a missed block or a penalty to stall the drive. One or two stops is all the defense really needs, since the offense can score at will. If the offense can't get into the endzone or turns the ball over, then the defense has go back on the field and hope for another mistake.

What does this mean for Notre Dame's game against Navy this season? Who knows. VanGorder didn't exactly shut down Georgia Southern's option attack, but Georgia blew them out thanks to some turnovers and big special teams plays. They also kicked a field goal before halftime, scored on their opening possession of the second half, and then returned a punt for a touchdown. That turned a close 10-7 game into a 27-7 laugher.

Those are the breaks Notre Dame got against Navy in 2011 and 2012 but didn't last season. Navy played flawlessly until they fumbled the ball on second down during their final drive. And still, if Tommy Rees doesn't TOMMY NO!! in the second quarter, Notre Dame probably takes a 17-7 lead and the whole complexion of the game changes.

This doesn't excuse bad defense, but Navy hasn't stopped Notre Dame's offense under Brian Kelly since the 2010 debacle. I guess we need to just brace ourselves for another frustrating game of "death by a thousand five yard gains" and hope the defense catches a break. In these games against Navy, it seems like our best defense is an unstoppable offense. So we'll just have to cross our fingers and not breathe easily until the Irish manage to go up two scores.

*In his only season as head coach, VanGorder scrapped the option and promptly went 3-8. He left after the 2005 season for the Atlanta Falcons.