Penn State employed a zone defense on the crease to beat the Irish. Let's take a look at what Notre Dame did right and wrong to defeat it.

Punter Bro has contributed to this article.

Happy gameday, Irish Lax fans! Since the Irish are taking on North Carolina later today, Punter Bro and I have decided to add a new element to our lacrosse coverage. Since lacrosse is a new sport and there is a large amount of people still trying to learn the game, Punter Bro and I are going to expand the OFD Films unit to look at the gameplan and strategy of the Irish Lacrosse team. I think it will be beneficial to lacrosse and non-lacrosse fans alike to see how intricate the game really is, and since lacrosse combines elements of many sports, fans can see just how teams operate after looking at the game film.

As good as the Irish looked in their game against Jacksonville, they looked equally as tight in their loss to Penn State. Penn State controlled most of the pace in their 8-7 win over Notre Dame, but the Irish were able to get back in the game when the Irish attack unit was able to capitalize on a zone defense that Penn State had been using all day.

The concept of a zone defense in lacrosse is typically used in very limited scenarios. The most common is the "box and one" zone defense that teams use in Man Down situations. There are obvious variations to that, the first being a tight, sticks-up defense that forces teams to shoot from the outside and the second, the "Hopkins" defense, relies on the zone being aggressive, jumping the ballcarrier and the adjacent passing lanes, leaving the furthest man away from the ball wide open.

The other scenario in which a team would utilize the zone defense is when they cannot match up man-to-man on a specific player or players on the offense. You see this a lot in youth lacrosse. Teams that have short, speedy attackmen can run all over youth squads with big, burly defensemen. Youth coaches will compensate for that by keeping their defense in tight, protecting the goalie from point-blank shots and protecting middies from having to slide on every one-on-one matchup.

Penn State used a variation of the two. Watching the game tape, it was probably clear to the Penn State coaching staff that Notre Dame had a dynamic and explosive offense that relied heavily on off-ball movement and heady play by the Irish Attack. Specifically, as seen in many of the goals against Jacksonville, Notre Dame's strength from the attack was the back cut. What this means is the ND attackmen would cut from behind the crease (also called "X") behind the Jacksonville defenders. ND would feed these cutting attackmen from up top and this set up many easy goals. To counter this offense from ND, Penn State sat their crease-defenders in a short, triangle defense that relied on back-rotation from the Nittany Lion middies. When the Irish had the ball up top, the Penn State defenders on the crease squeezed while the others jumped the ball. When the Irish played from behind the goal, the Nittany Lions middies sluffed to the crease while the defenders forced a play.

It was quite impressive, and the Irish clearly had trouble with it all day.

Why though? Most teams don't use zone defense because it is beaten the same way that every other zone defense is beaten. Yet, Notre Dame continued to struggle.

This was Notre Dame's last-chance to tie the game up, and a perfect example of what the Irish did wrong, and what Penn State did correctly.

The Irish are in a base 2-3-1 offense: two middies up top, another middie on crease, two attackmen wide (one you can't see but he's right off the screen to the right) and one attackman behind cage to chase shots.

Penn State is obviously in a zone. Three Penn State defenders are playing up top, with two Nittany Lions defenders collapsed on crease. It almost looks like a 4-2, but this image has them mid-slide. What does the result look like?

One of Penn State's defenders was in the act of sliding to the middle, allowing the top defender to jump the Notre Dame middie about to shoot. Meanwhile, the two longstick defensemen are still sitting on crease, preventing a drive by the Irish offense from up top. The middie is forced to make a long shot, that is saved.

But Notre Dame also attempted to defeat the zone by running it through the Irish attack. It was also a struggle, but let's look at how Matt Kavanagh was able to get an impressive, albeit lucky goal.

Here, Kavanagh has the ball at GLE (goal line extended) and is attempting to make a pass to the backside-middie that is cutting towards goal (you see him top left).

Penn State's crease slide does his job, sliding to Kavanagh as he is attempting to make the pass. As a lacrosse defender sliding from crease, you always want to wait until the ball carrier comes above the extended goal line. The thought process here is that the attackman cannot score when he's behind the goal. Staying at home (the crease) is always preferable. The cutting Irish middie see this slide and halts his cut. Also notice the two Penn State defenders that are sitting on crease. That is the Penn State zone. There are two Penn State longpoles on crease (one is on Kavanagh) and in addition to that, #8 for Penn State (their 3rd longpole), is cheating towards the goal to fill the open space in the middle. #44 for Penn State, their 4th longpole is also cheating in to fill the middle.

...but here is where, as my brother-in-law says, things "get wierd." The Penn State defender sliding to Kavanagh was too cute by half and his up-and-over stick check failed, allowing Kavanagh to escape. Luckily for him, one of the Nittany Lions zone crease defensemen was ready and waiting for Kavanagh. He slides to him and two more Penn State players move to fill the open space. But Matt Kavanagh is Matt Kavanagh and scores on a no-angle shot from here. But look at what he had in front of him: four Penn State defenders and the goalie. That isn't even counting the man he just beat behind goal. The zone also worked here for Penn State. Kavanagh just got lucky.

The defense that Penn State used on the Irish was difficult to dissect, and difficult to score on, as evidenced by the issues that the offense had against it. But the zone is beatable, and I'm joined with Punter Bro here to take you through the steps on how to beat a crease-zone defense.

This is a 1-4-1 offense. Instead of having two middies up top, another middie sits on the crease, creating a blob in the middle that forces the crease defenders to move to cover those players. 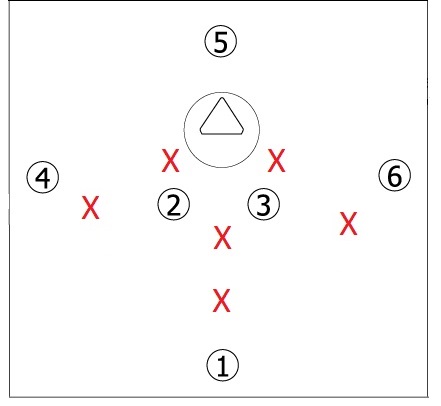 Here is how the zone would have looked versus a 1-4-1. In the 2-3-1, ND only had one offensive player on the crease. Because of this, Penn State's defensemen on the crease could engage the attackman driving from X (behind the goal) and the top middie did not even have to slide to cover the attackman on the crease, as there was already a defenseman on him. In the 1-4-1, the X attackman is free to roam as he pleases. If he drives from X, one of the crease long poles would be forced to cover him, requiring the "top of the triangle" to slide to cover the crease. To make this work for Penn State, the defenders would have to slide very early to cover the ND offensive players on the crease. It's not impossible. However, if I were to beat Penn State's zone, this is how we would do it with a 1-4-1: 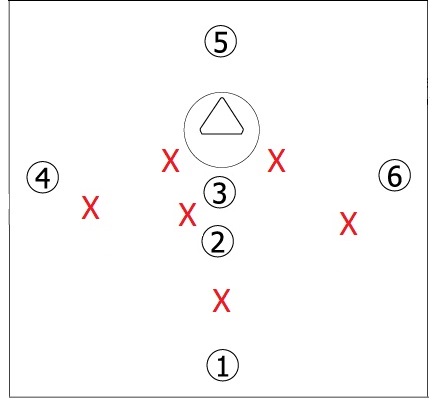 An offense like this would enable the X attackman to have free reign, which he did for the most part against Penn State. In this offense, if ND stacked the attackmen on the crease, creating a high-crease and low-crease situation would require the backside long pole to pinch (creating space), and it would effectively require the "top of the triangle" defenseman to cover two guys at once. A perfect play in this offense is below: 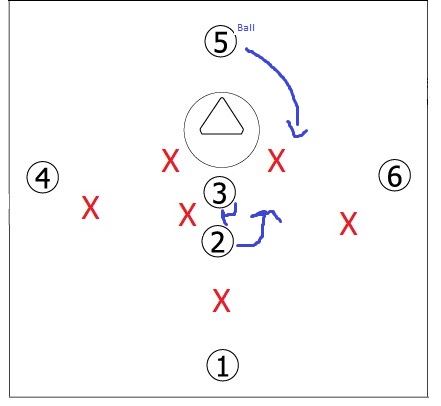 ND drives from X. At the same time, 3 sets a pick on the top triangle defenseman for 2. The defenseman on the crease to the driving side would be forced to pick up the attackman driving from X. 3 has picked the top triangle. There are three ways to stop this:

1. The top defender on 1 could pinch down to cover 2. But, if the defense does this, 1 is now wide open at the top of the crease for a crank on the cage.

2. The side defender on 6 could pinch. However, like with 1, this would leave 6 wide open for a shot on cage as with 1.

3. The backside long pole on crease could slide. This would be difficult, as he would be focused on the possibility of 4 cutting, the traffic in the middle, and he would effectively have to slide ALL the way across the field.

ND could actually make this more complicated for PSU and do this: 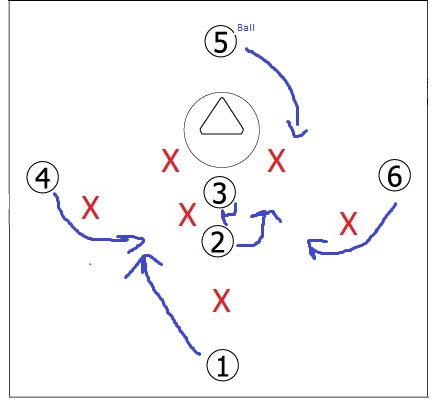 Notre Dame wasn't really able to capitalize on Penn State's zone. A lot of their goals were in odd-man situations or in transition where Penn State didn't have time to set up their defense. The key with beating a zone is overloading the zone and forcing the defenders to cover and leave their areas. The Irish weren't able to do that, but looking here at simple, formation-based plays will allow coaches and players alike to see just how a zone defense can be beaten.