Coach Brian Kelly and his staff welcome the 2014 recruiting class after months of work to get them on board. 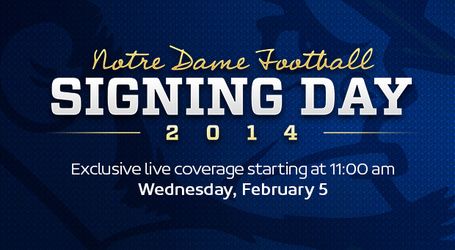 With another national signing day in the books, Coach Brian Kelly and his staff finished with a consensus Top 10 class (based on 247's composite rankings). With 23 signees, the staff focused on Power (Offensive/Defensive Line) and Big Skill (Tight End/Linebackers) and delivered on their goal.

While many might be disappointed in this class-due to both missing out on some high profile targets late in the game and not measuring up to the 2013 class-this class will provide depth and talent that will pay dividends for the next four or five seasons.

Here are Coach Brian Kelly's thoughts on this class from yesterday's presser:

The GIF-off to express your feelings on this class can now commence.

Now, on to the class.

We are continuing our super-scientific grading system for the Notre Dame recruiting class. Our judging panel includes Eric, 4pointshooter, alstein, pburns2010 and myself. As a sneak peak, here are the averages handed out by each member of the staff:

85-89: Eventual starter with chance to play as underclassman

80-84: Raw prospect with decent potential but a couple years away from impact

Note: All Height/Weight/40 times as listed on 247Sports.com

If I were to describe this class in one word, it would be: Upside. So many players signed in this class have an enormous amount of potential. It will be up to the coaching staff to develop these young men and help them realize that potential.

I can understand some of the undercurrents of disappointment voiced by fans. To have a class with a primary focus away from skill position players (and focused on "Power" and "Big Skill"). There is an old adage in football that states you win the game in the trenches. This recruiting class goes a long way in adding key depth along both lines.

Throughout this recruiting cycle, the lack of depth along the defensive front seven was discussed time and time again. Adding 4 offensive linemen and 11 guys combined between the defensive line and linebackers, the staff did a phenomenal job here.

The staff was in it late with several high profile prospects (among the 150+ offers put out this year), including top quarterback Kyle Allen and signing day announcers Juju Smith, Michiah Quick and Braden Smith. Missing out on this group of high 4 star and 5 star athletes will tend to leave fans wanting a bit more. Most of the highest rated recruits in this class (Nelson, Brent, Trumbetti) were early commits that rose through the rankings as summer camps and senior seasons wore on-which speaks volumes as to the ability to identify talent.

There isn't a huge need for freshman to step in and contribute right away in 2014. In the positions of need (LB, DL) there are plenty of options available for the staff. From this class, I can see Brent play on offense and Cage, Trumbetti, Hayes, Morgan and Watkins on defense.

Most likely to be a Household Name by October: Andrew Trumbetti

Since Trumbetti is an early enrollee, he has the benefit of spring practice and 8 months of adding weight and conditioning under the supervision of Paul Longo. He should have every opportunity to earn a spot in the DE rotation as a freshman. I can see him getting 15+ snaps a game, especially on passing downs where his only responsibility will be to rush the passer.

No surprise that I picked two late additions to the 2014 class as the biggest sleepers in the class. Jhonny Williams is the definition of a raw prospect. He has phenomenal size and speed, with plenty of room to add weight. He didn't play against great competition in high school and being relatively new to the game still needs plenty of work on fundamentals and technique. He has a similar frame to current OLB/DE hybrid players Ishaq Williams and Romeo Okwara. Given the development of those two players, I think he can have a similar career trajectory.

Kolin Hill burst on the scene late thanks to a great senior year. I think he is an ideal fit for a pass rushing outside linebacker who can also play in space. Being a bit of a late bloomer may have hurt the number of offers he received and his recruiting rankings, but may give him a bit of a chip on his shoulder to prove the doubters wrong. I am really looking forward to seeing him in action, and it will be interesting to see how he is utilized in new defensive coordinator Brian VanGorder's system.