OFD Films: Will Nyles Morgan Start for Notre Dame in 2014?

Share All sharing options for: OFD Films: Will Nyles Morgan Start for Notre Dame in 2014?

I'm not going to lie to you, I'm worried about the inside linebacker position next year. Like all Irish fans, I hope that Jarrett Grace can return to full health from a very serious injury, but it's far from certain if he'll be 100% next season. With our most experienced inside linebacker questionable for 2014, it makes sense to examine the rest of the depth chart.

Hmmm.. how do I put this politely? (You know, in Canadian terms!) The depth chart at inside linebacker is... uhhh... unproven. Fortunately, National Signing Day has provided us with hope that a saviour will emerge through a letter of intent sent via fax machine (the modern day equivalent of stone tablets). Nyles Morgan, a 6'2" 223 lb linebacker from Crete Illinois, is widely considered to be a prime candidate to play the role of Moses at the inside linebacker position. Let's go to the film room and see if Morgan can part the Red Sea for the Notre Dame defense in 2014. 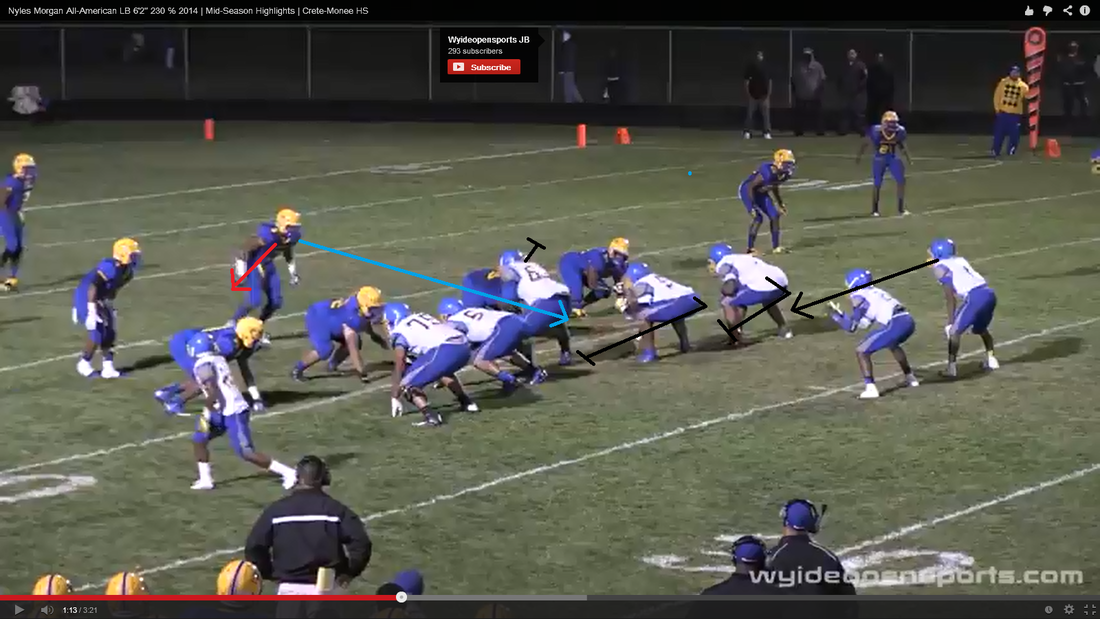 If you are going to play middle linebacker in an even front, this is a read you must be able to make. If you can't make this read, you can't play middle linebacker. As soon as the center down blocks, the best, most aggressive linebackers attack right off his hip (blue arrow) and find the ball carrier. Linebackers who tend to be conservative (or have been coached to play more conservatively) will check the A gap (center-guard gap) and then follow the red arrow. 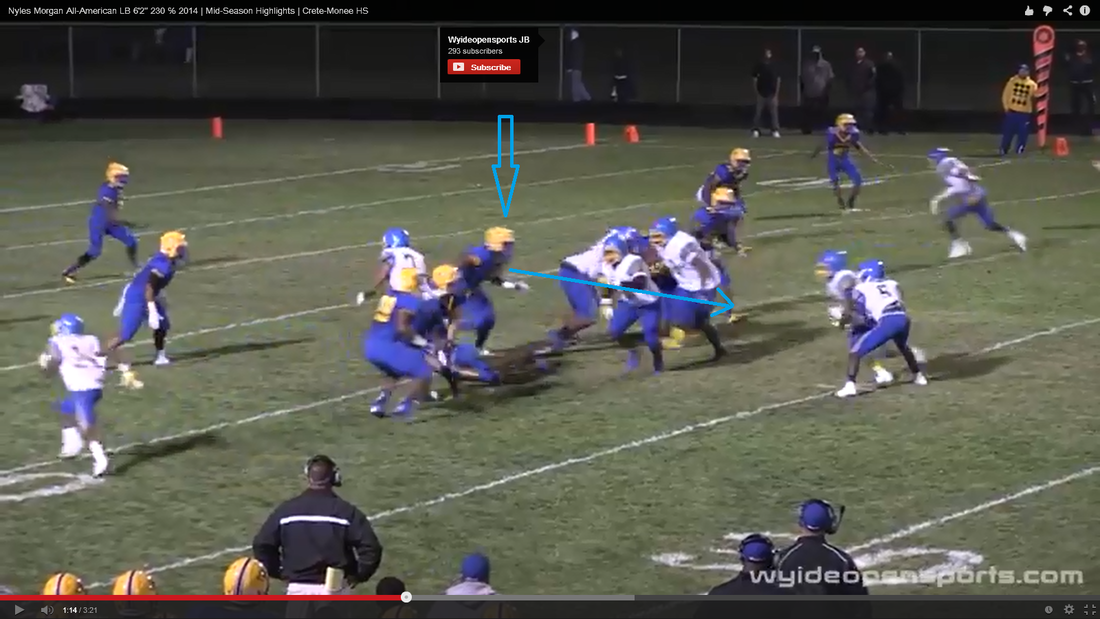 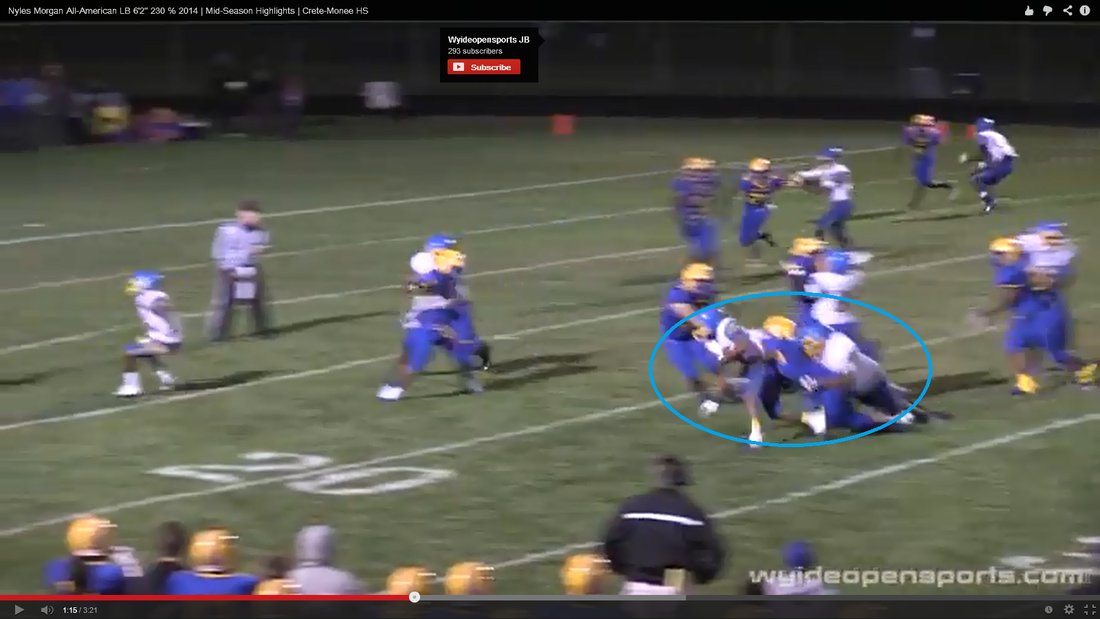 Nyles Morgan making the tackle. Note the offensive lineman on his back. 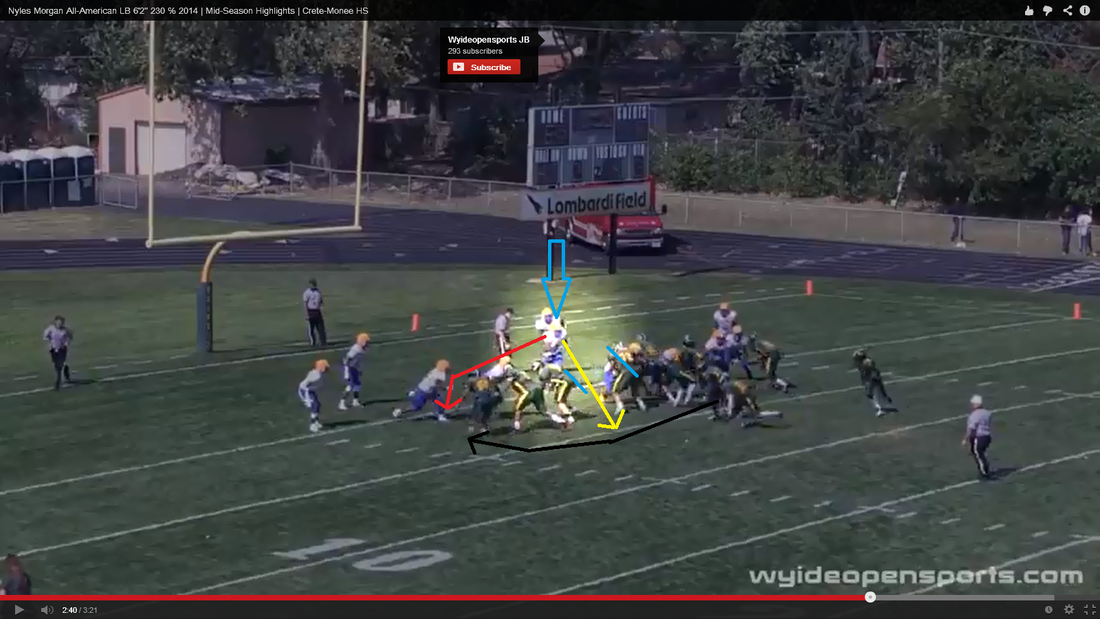 This will end up being a running play to the outside (in the direction of the black arrow). An obvious lane opens up inside and Morgan (blue arrow) is faced with a choice. Follow the red arrow to the perimeter (the safe choice) or follow the yellow arrow and attack (the aggressive choice). 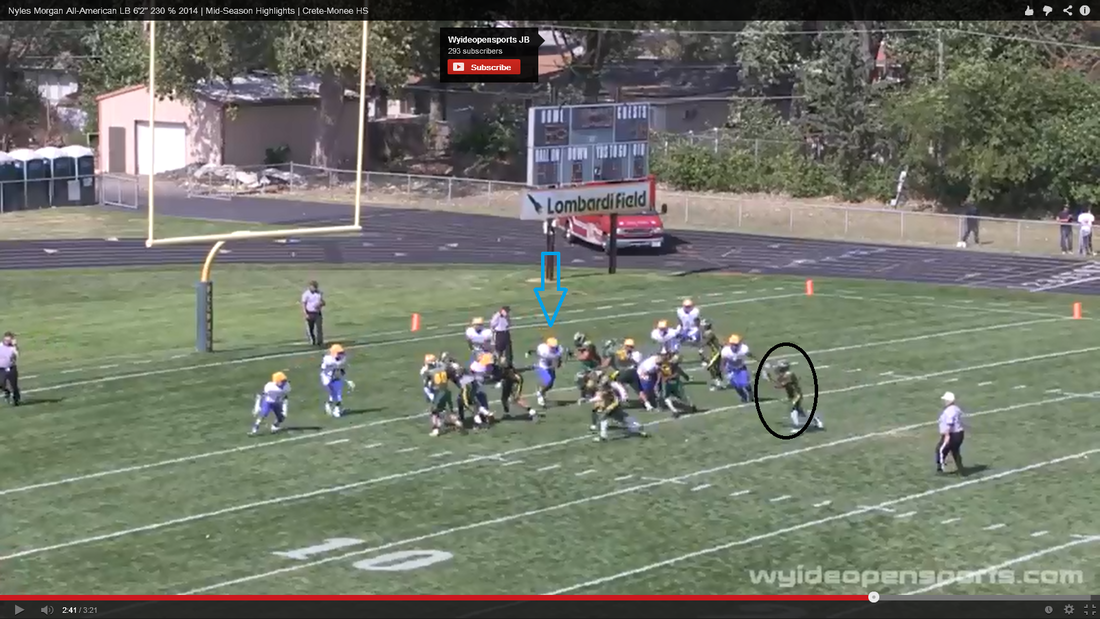 The offensive player is just about to get the ball on a toss play (black circle). Nyles Morgan (blue arrow) makes the aggressive choice and is already in a full sprint on his way to the ball carrier.

This screen shot is a thing of beauty. Morgan shows a relentless desire to get to the ball carrier as quickly as humanly possible. 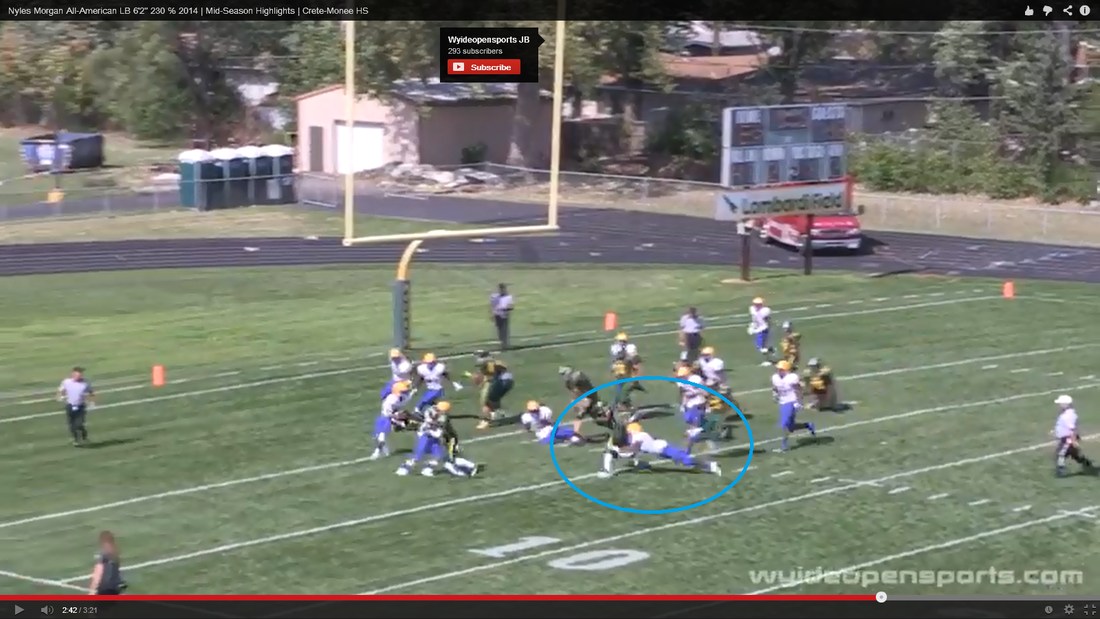 I absolutely love the way Nyles Morgan plays the run. Three things really jumped out at me as I watched the film.

Let's take a look at Nyles Morgan in pass coverage. As you will see this is an area he needs to work on before the start of the season. 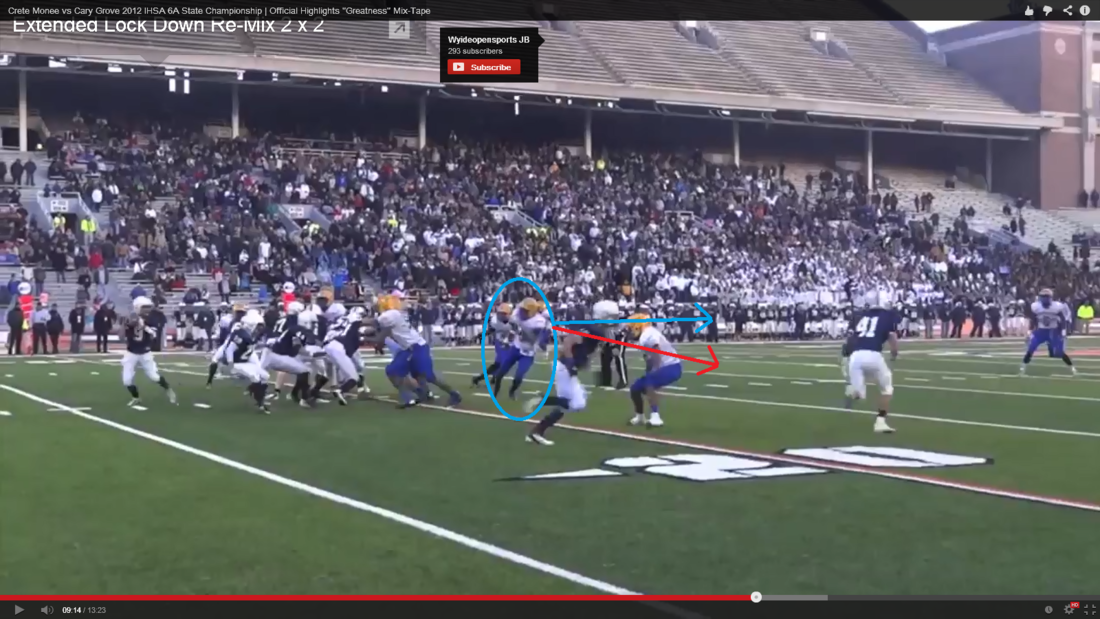 A straight drop back from the quarterback means that Morgan should be looking to get depth on his pass drop (blue arrow). Instead he takes a very flat angle following the red arrow. 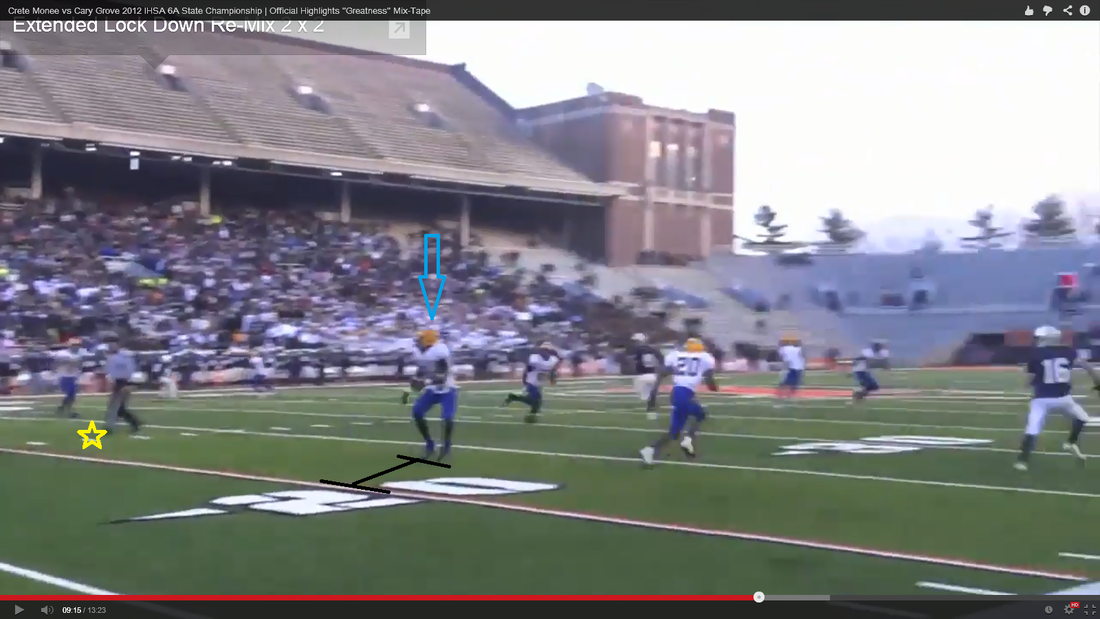 Morgan started about where the yellow star is. As you can see he hasn't gained much depth relative to the 20 yard line. To be effective at Notre Dame, Morgan is going to need to learn to get much deeper when he drops into coverage. 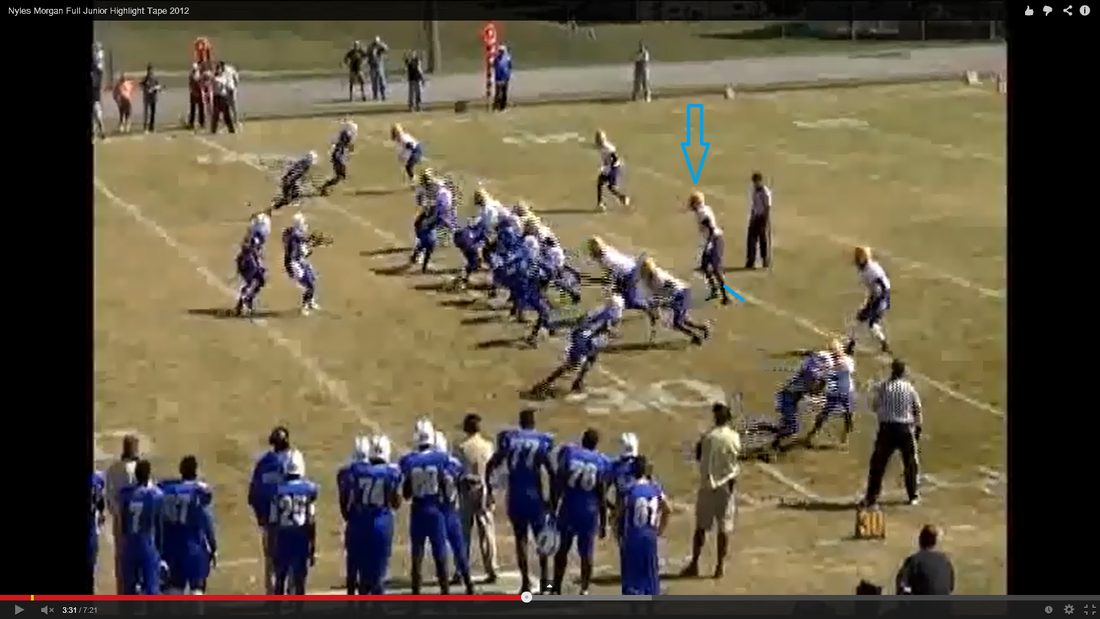 Again we'll see the same lack of depth problem in this play. Morgan will start with his heels roughly on the 25 yard line and end at about the same depth. 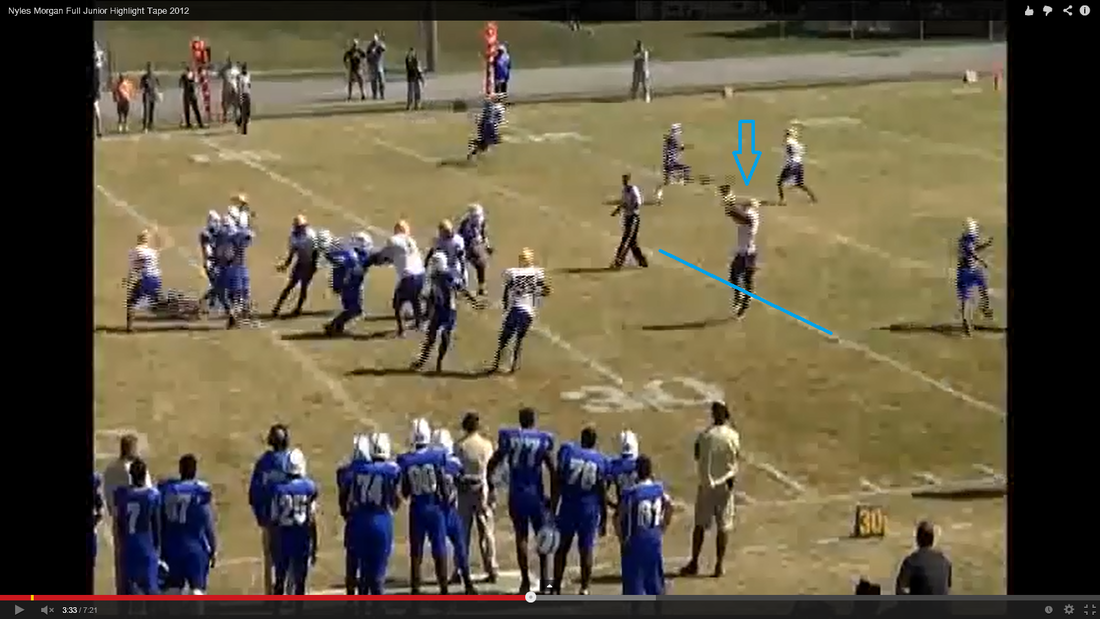 Morgan doesn't drop on this play, he simply drifts to the outside. Admittedly he does get an interception, however he won't be able to get away with this at the next level.

Nyles Morgan will need to work on his pass coverage skills in the coming months. In particular, getting depth consistently when he drops into coverage. To be fair, when I watched the film I did find examples of him getting better depth in some instances. However, this wasn't consistent. He has a tendency to get locked on to the quarterback and shuffle laterally instead of getting to his zone. This is something he will need to improve before the start of the season.

That is the million dollar question. Keep in mind there are a lot of variables that go into answering this question. Will Jarrett Grace be healthy? Do other inside linebackers get injured? Can Morgan adjust to the speed of the game? Can he manage the responsibilities of being a student-athlete at Notre Dame?

Unfortunately, I'm not the 7th son of a 7th son, so I don't have clairvoyant powers. All I can do is make predictions based on what I have seen on film. On this basis, I feel Nyles Morgan won't be a starter for the Irish defense next year.

Don't' get me wrong, I think he has immense talent and I believe he will be a very good player for Notre Dame. I just don't think he is ready to start, at least not early in the year. I suspect we will see the staff bring him along slowly, playing him on special teams and in specific situations on defense (similar to how Tarean Folston was used on offense last year). As the year progresses and he adjusts to the college game, I anticipate he will see more playing time (of course this could change in a heartbeat if someone gets injured). Here are some things to watch for in terms of Morgan's development:

There is no question that Nyles Morgan is a great talent. Like any young player, there will be a steep learning curve as he starts his career at Notre Dame. I don't think Morgan is ready to part the Red Sea just yet, but I believe over time he will help lead us to the promised land.