If we're going to deal with the sting of the last half of the season, then by God, we're not going to do it by sitting here and sulking all day.

This past Sunday, Christians began a new liturgical year with the First Sunday of Advent, the four-week season of prayerful anticipation that precedes the celebration of Christmas on December 25th. For Notre Dame fans, this past Sunday also marked an important occasion: the end of the 127th regular season of Notre Dame Football. Many gallons of virtual ink have been spilled over the past several weeks regarding the gut-wrenching losses, the crippling (heh) slew of injuries on defense, the future of every player and coach we can think of, the meaning of life, etc., etc. I hope you'll forgive me, but I'm going to add my own words to the pile.

If someone asked me right meow to stand up and preach about the events of this past season, I could probably assemble a solid theological treatise on the spot. I might say that just as Advent is the start of a new liturgical year, so too should we see the coming weeks and months as a way to put mediocrity behind us and begin rebuilding. Perhaps I could take the Advent message of "watching and waiting"--not as an act of powerlessness, but as a sign of true hope--and use it to temper our habit of agonizing over football-related things that we have no control over. Heck, maybe I could even pull out all the Scriptural prophecies I can think of to offer some comfort to those who are devastated that a bunch of college kids lost a few games.

Be that as it may, I'll only say this: Yeah, this stings. A lot. But it only stings because we care, and that'll make it that much sweeter when things eventually go right and we can say, "Yeah, we stood by this team, and we still managed to have fun AND not rip out each others' throats even when things were terrible." Thanks for sticking around, y'all, and thanks for making OFD a legitimately amazing community. Better times, they are a-comin'.

Alright, time to ditch the sappy and snarky stuff--we're here to actually enjoy ourselves, not give eulogies to a football program, am I right or am I right?

Kendall Moore's beer gut was once again crowned champion, this time courtesy of some creative photo editing, including the reappearance of an old favorite. 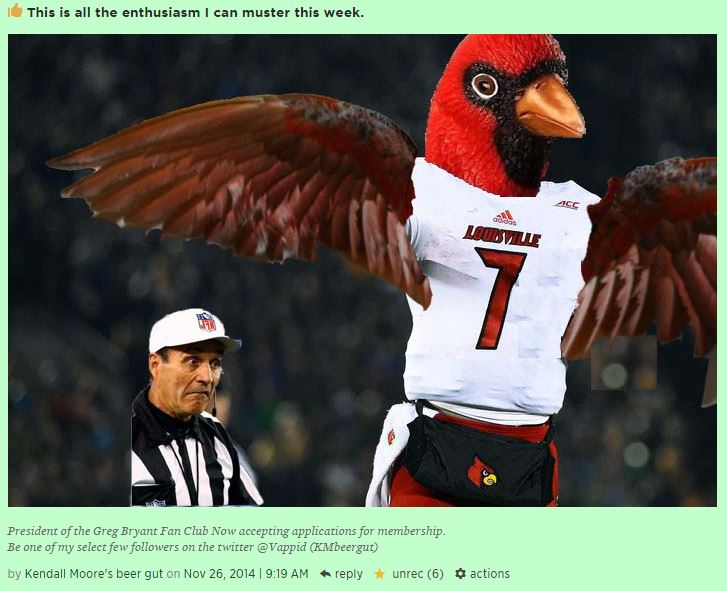 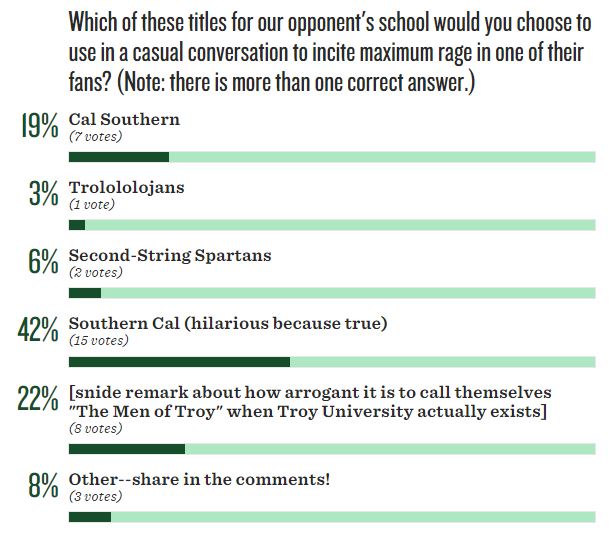 Well hey, at least they don't call themselves "USC Men" like a certain other hated rival.

Go ahead and caption this week's photo featuring USC's George Farmer leaping over the endzone barrier just ahead of Devin Butler's grasp; the winners will be acknowledged next week, and we'll do a bit of a season recap. Although this is the last Trick Shot Wednesday for the 2014 regular season, that doesn't mean there won't be plenty of other weeks where it makes an appearance on Wednesday morning! Thanks for all the wit, sarcasm, and ingenuity you guys display here every week--it's been a bit of a bumpy ride this year, but thanks to you, at least we can treat ourselves to a good laugh every week.