Share All sharing options for: OFD Films: Why consider Malik Zaire at QB?

In the reductionist world of internet message boards, battle lines have been drawn. Everett Golson or Malik Zaire. About the only thing both sides seem able to agree upon is that a two quarterback system is a bad idea.  Not surprisingly, the announcement that the Fighting Irish will play two quarterbacks in the Music City Bowl sent the Notre Dame Internet community into a bona-fide tizzy.

This season Notre Dame averaged a respectable 444.6 yards of offense per game. Everett Golson was responsible for 302.7 of those yards or roughly 68% of the offensive production per game. The next closest player was Will Fuller at 86.4 yards or 19.%. Clearly, Golson was a pretty important player for the Irish. In other news, the sky is blue and water is wet. So why would Brian Kelly take a player with that level of production off the field? Let's take a look at the film and see if we can answer that question. We'll break down 4 consecutive plays from the USC game that demonstrate the difficulty in defending the Irish offense with Zaire running the show. 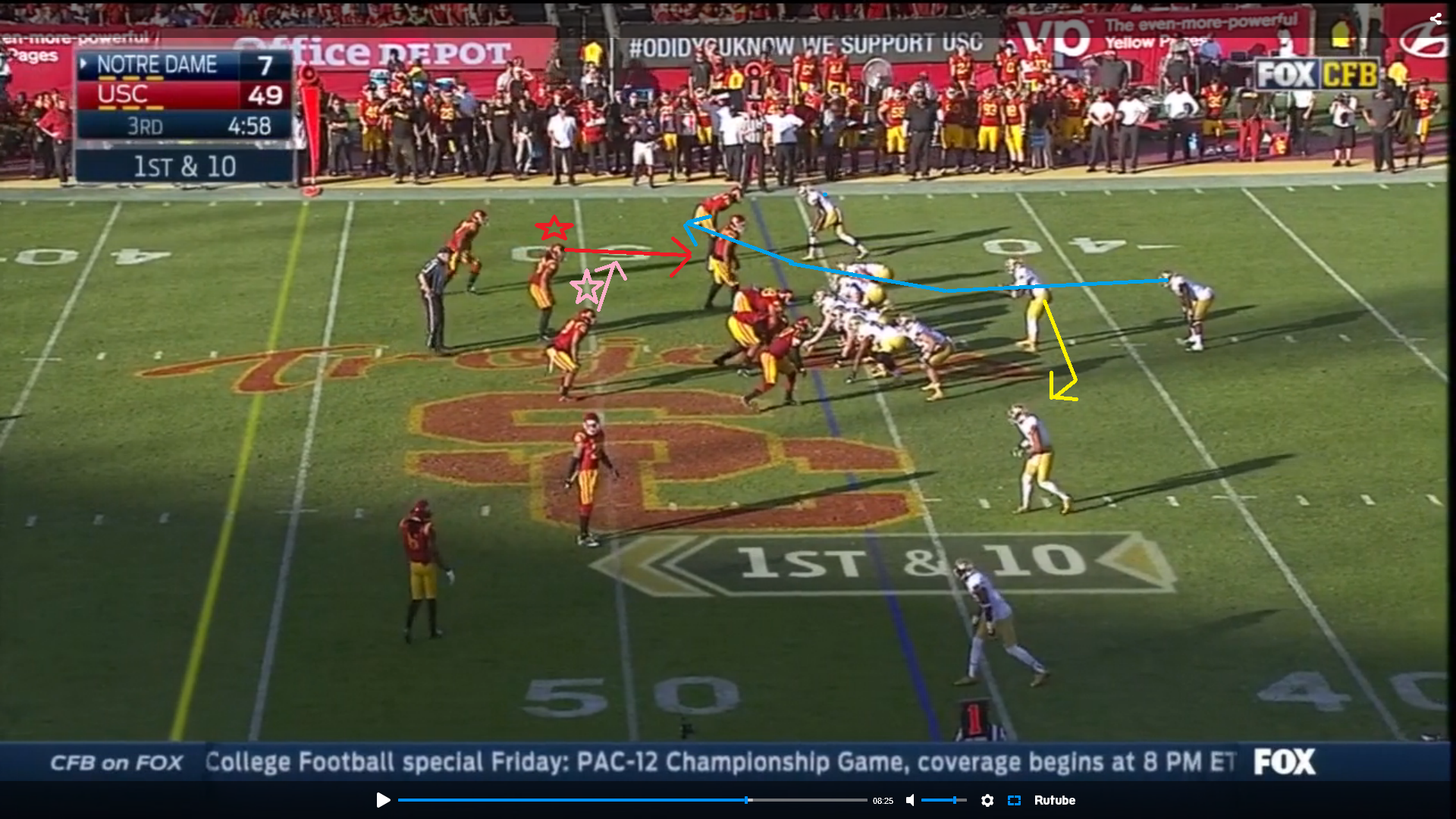 1st and 10. Greg Bryant (# 1) will get the ball on the zone read and do a nice job of pressing the hole before finding a seam and accelerating (blue line). Malik Zaire (# 8) will carry out a fake after handing off the ball (yellow line).

Generally speaking, Notre Dame has done a good job this year of blocking the linebacker who fills hard at the point of attack (red star, red line). Where they have struggled is blocking the backside linebacker scrapping over the top (pink star, pink arrow). One of the main reasons the Irish have struggled with this is because teams haven't respected the run fake with Golson (see this article for a more detailed explanation of this problem). 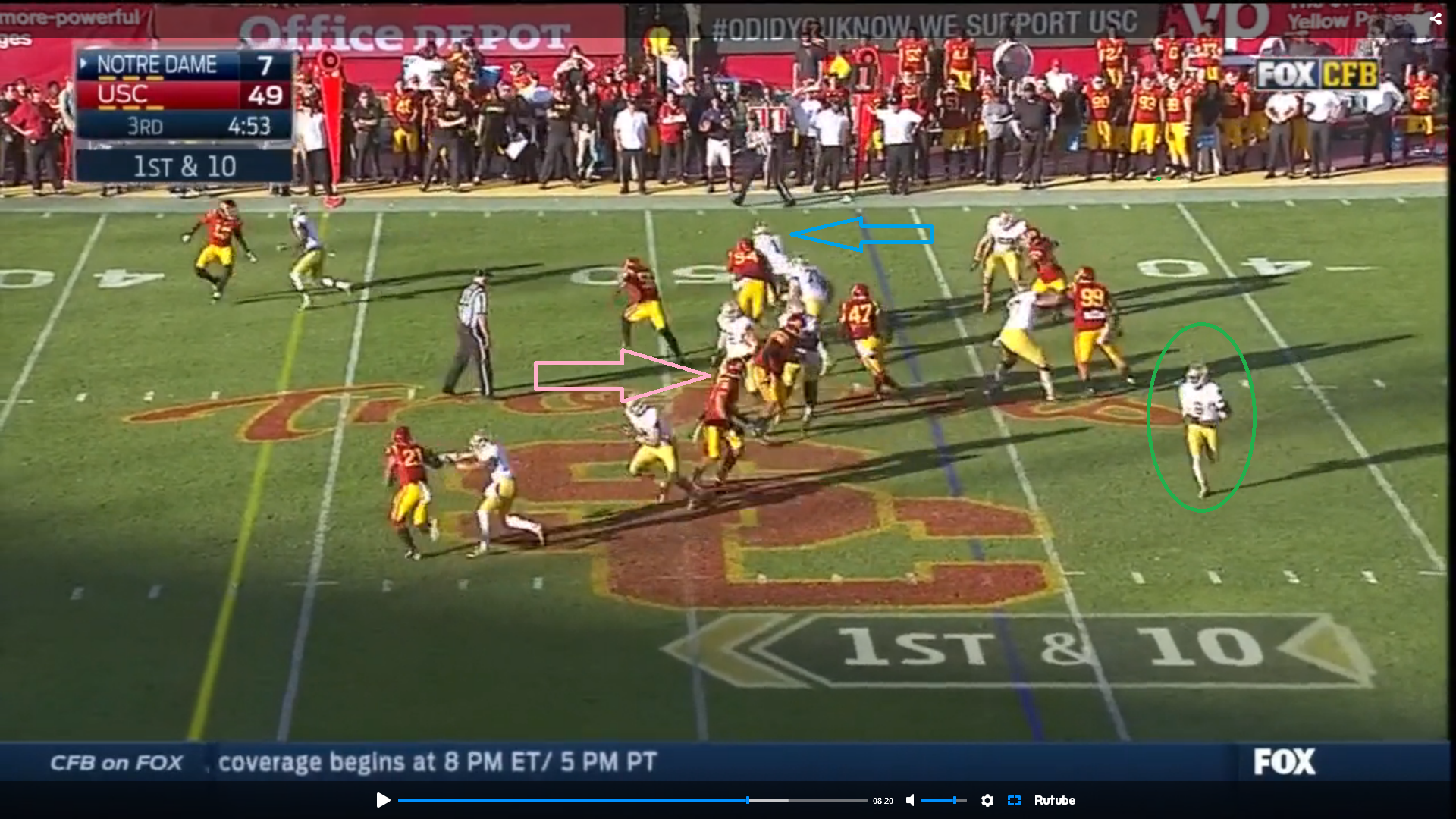 USC figured out pretty quickly that Zaire will keep the ball on the zone read. In this example, the linebacker who normally gives the Irish trouble (pink arrow) has to follow Zaire (green circle). One less player in the box gives Greg Bryant (blue arrow) a little extra room. The result is a 17 yard gain on first down. 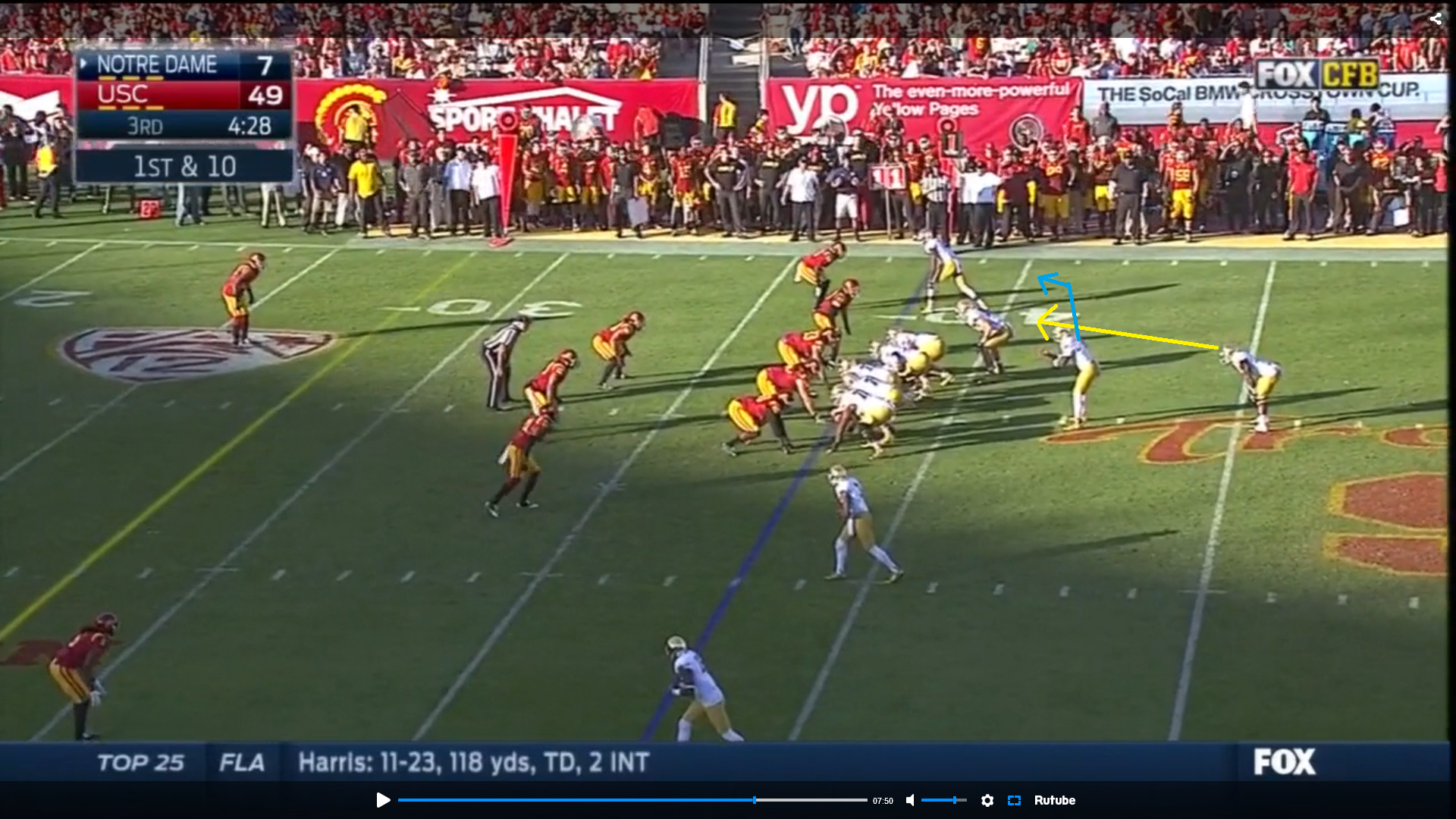 1st and 10. Notre Dame will run a very similar formation and play. Zone read out of the pistol. 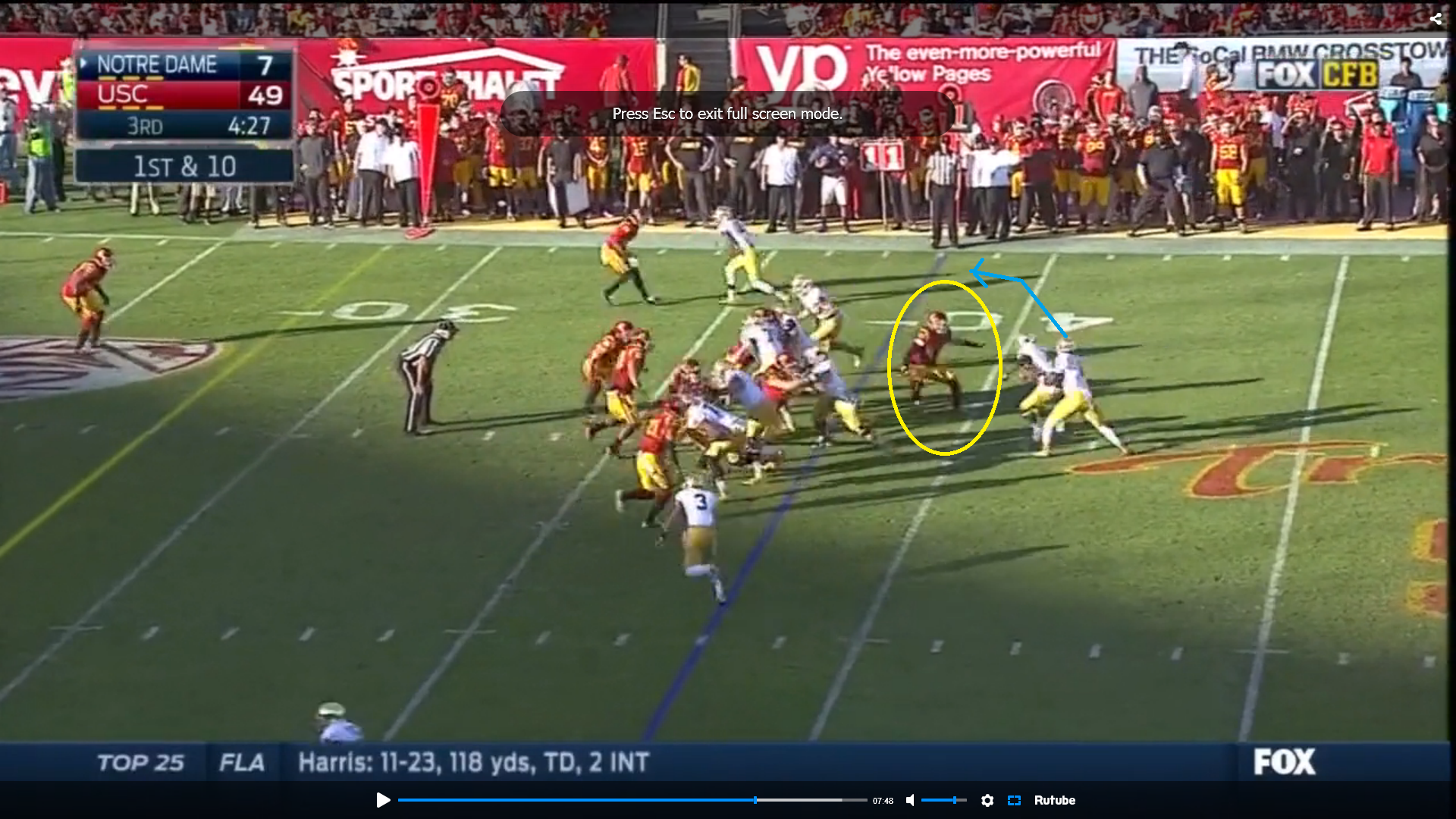 A fraction of a second after the snap, Zaire is reading the unblocked defender (yellow circle). Zaire decides to keep the ball and follow the blue arrow. 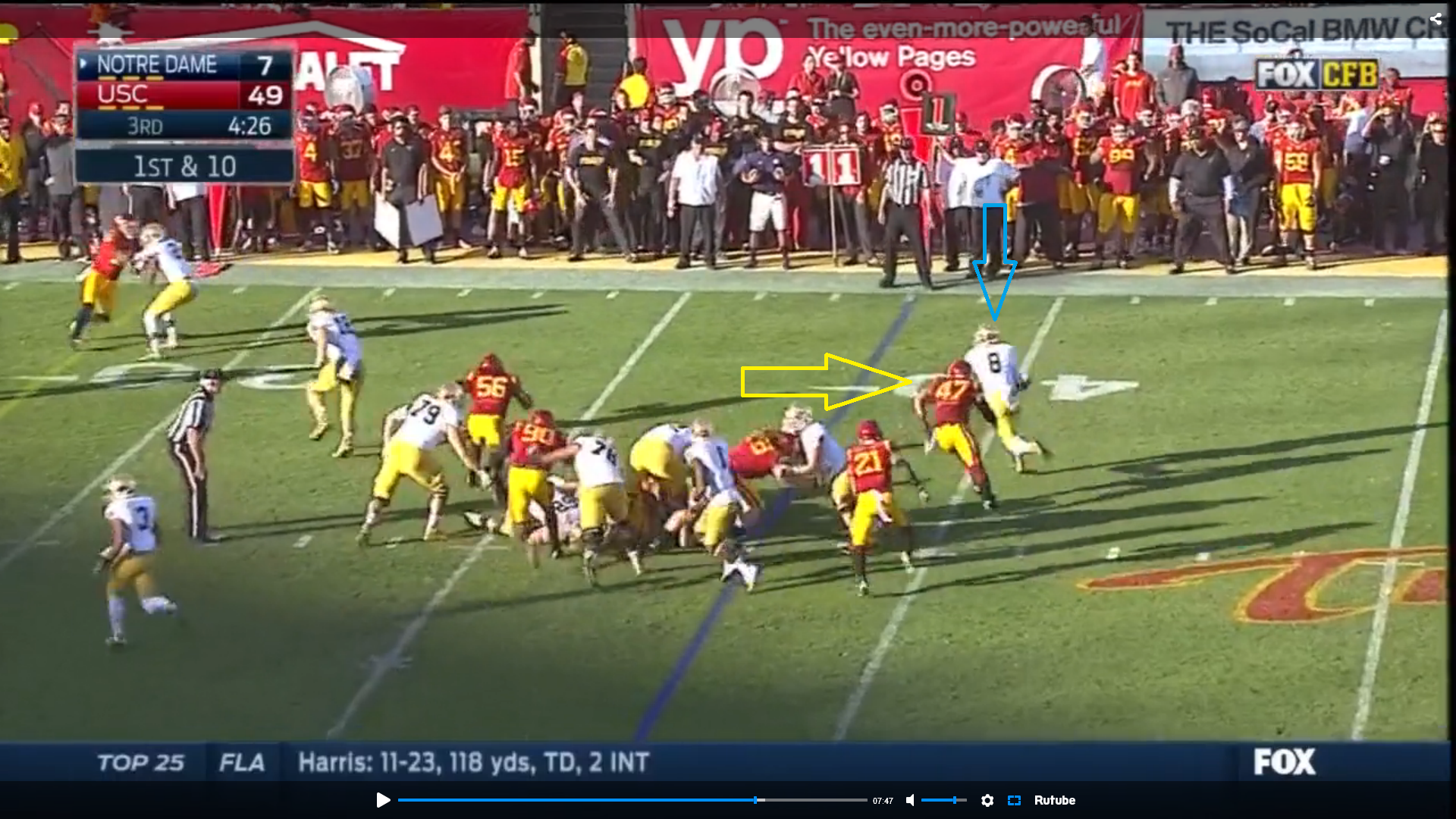 Good decision. Zaire gets to the perimeter (blue arrow), while the unblocked defender is caught in no man's land (yellow arrow). The result is a 5 yard gain on first down and a Trojan defense that seems to be wrong no matter what they do. 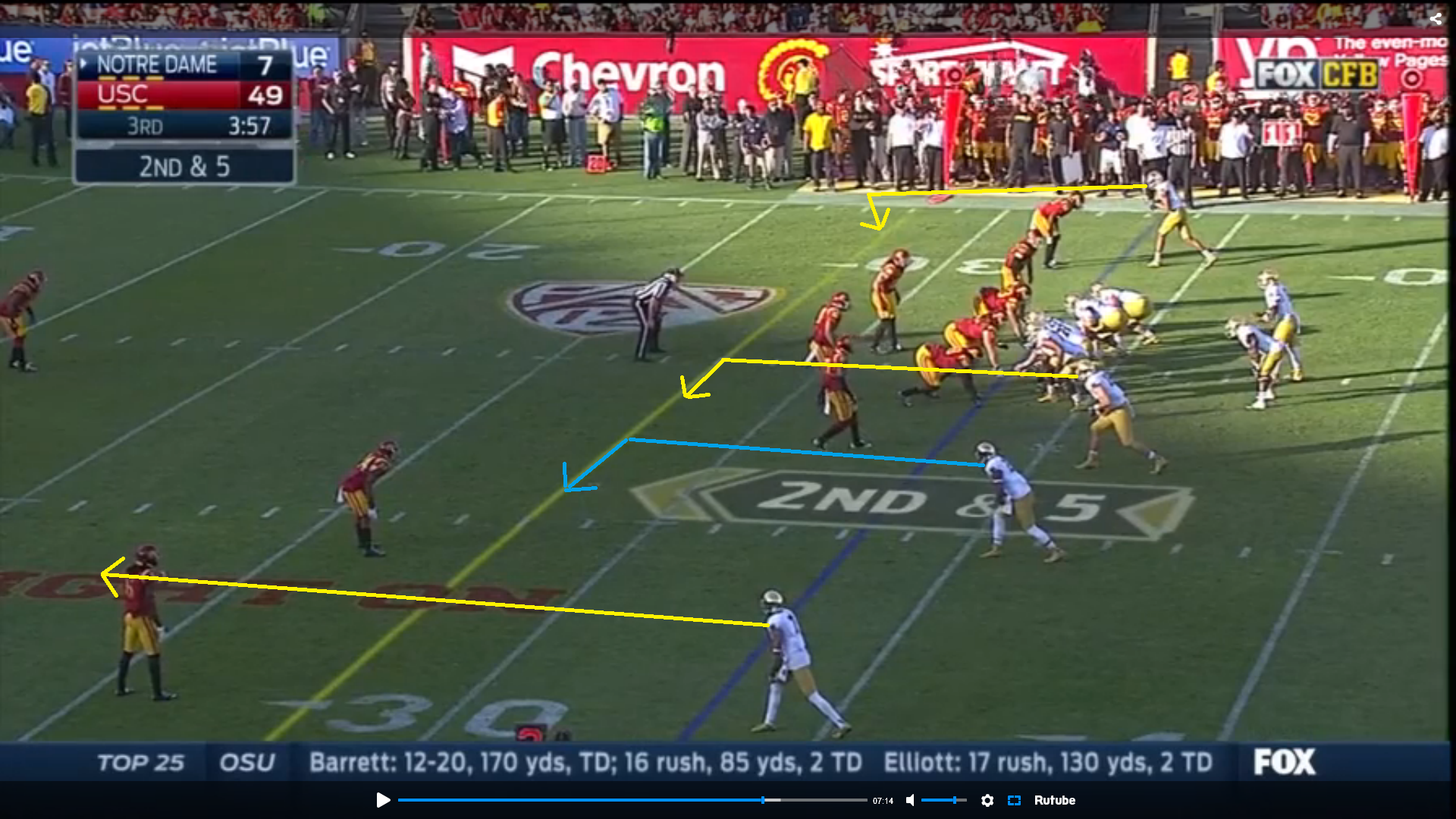 After the success of the previous two plays, the Trojans have to be thinking run. Bzzz... wrong answer. Zaire will step up into the pocket and deliver a strike to CJ Prosise (# 20) on the out (blue arrow) for a first down. 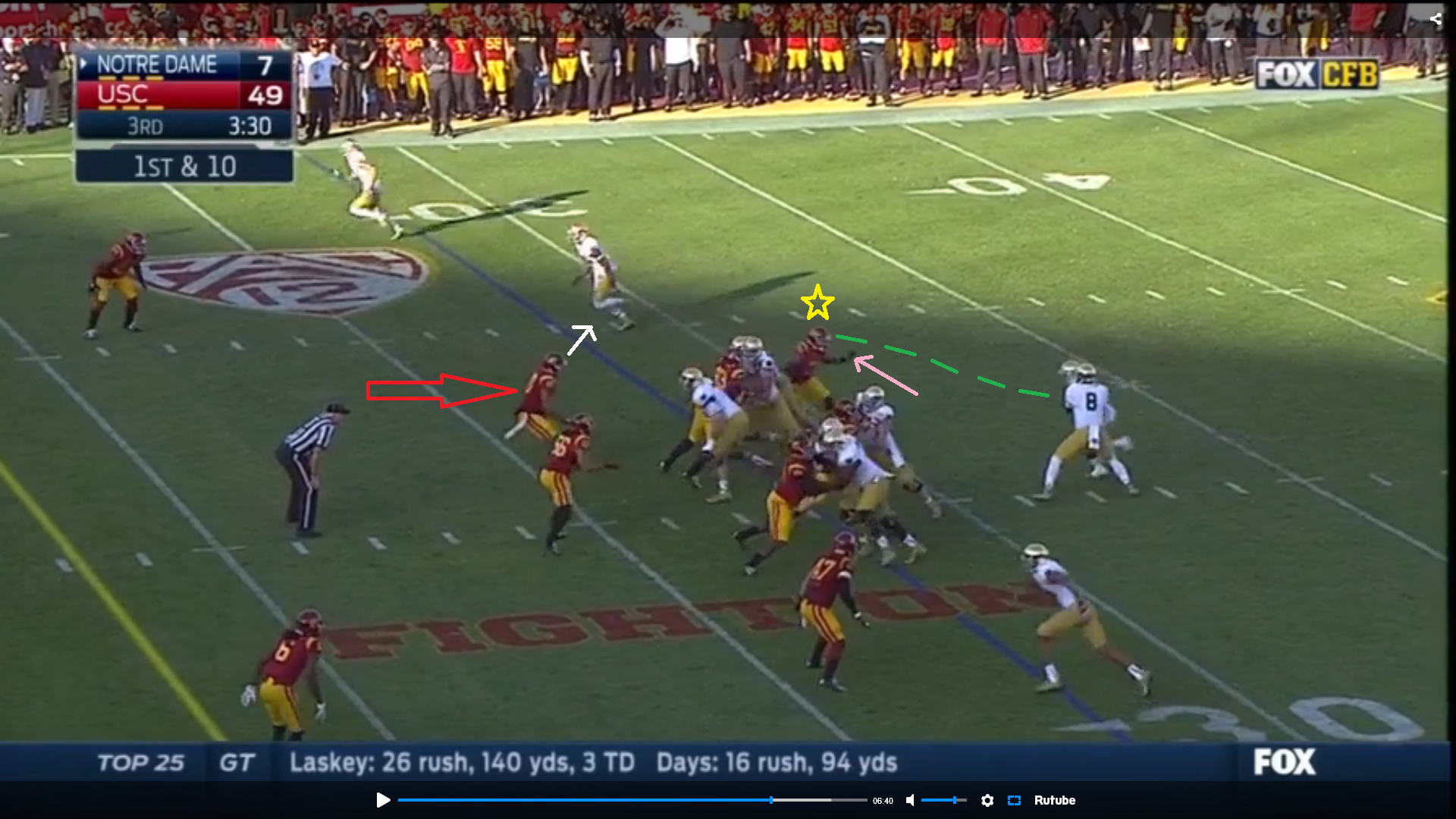 The blitzing defender hesitates for a split second (you can see his hand come up as he slows his momentum - pink arrow) because he's focused on the exchange between Zaire and Bryant (green dotted line). 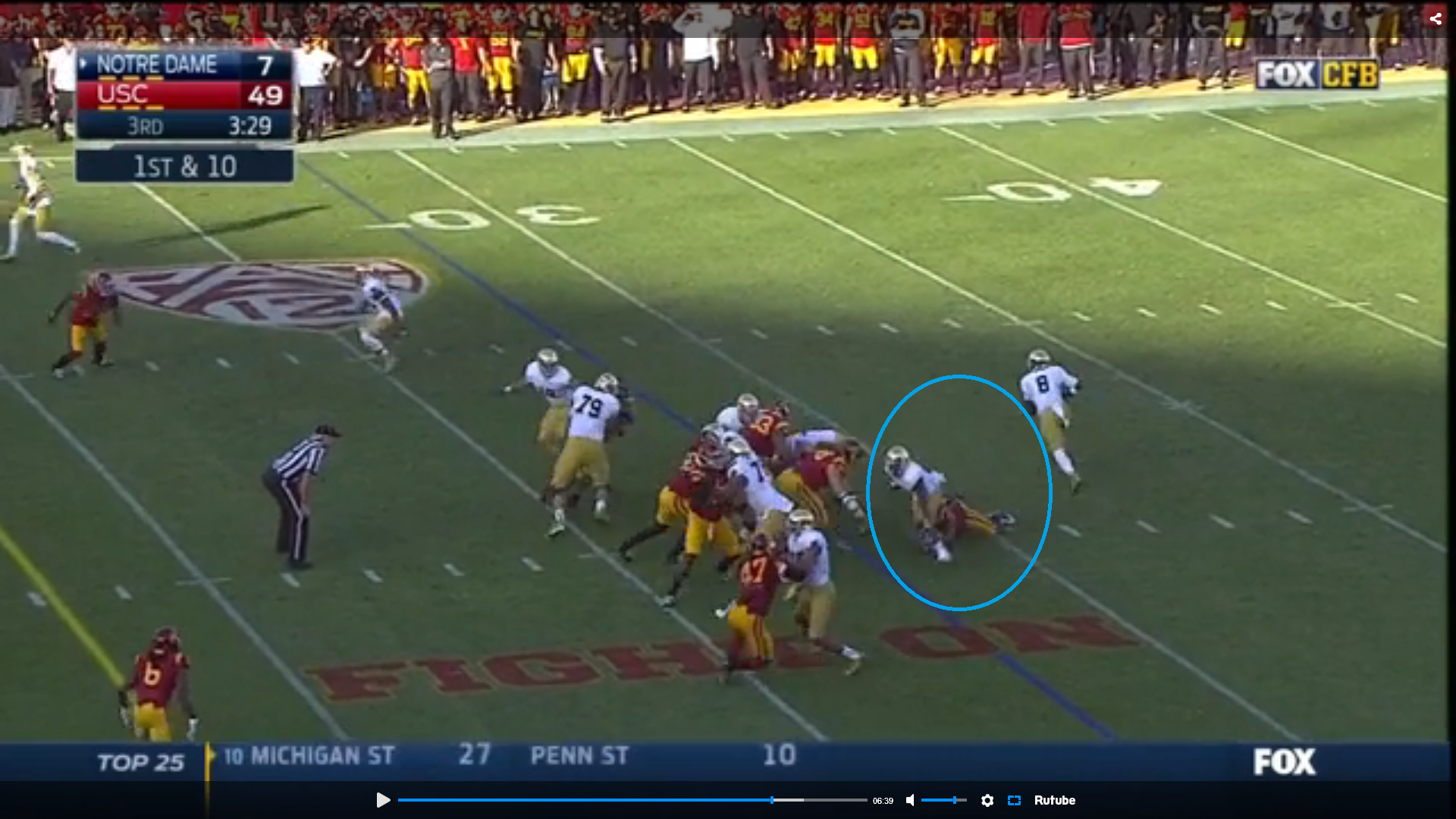 That split second hesitation makes all the difference (blue circle). If the defender doesn't hesitate, he almost certainly makes the tackle in the backfield. 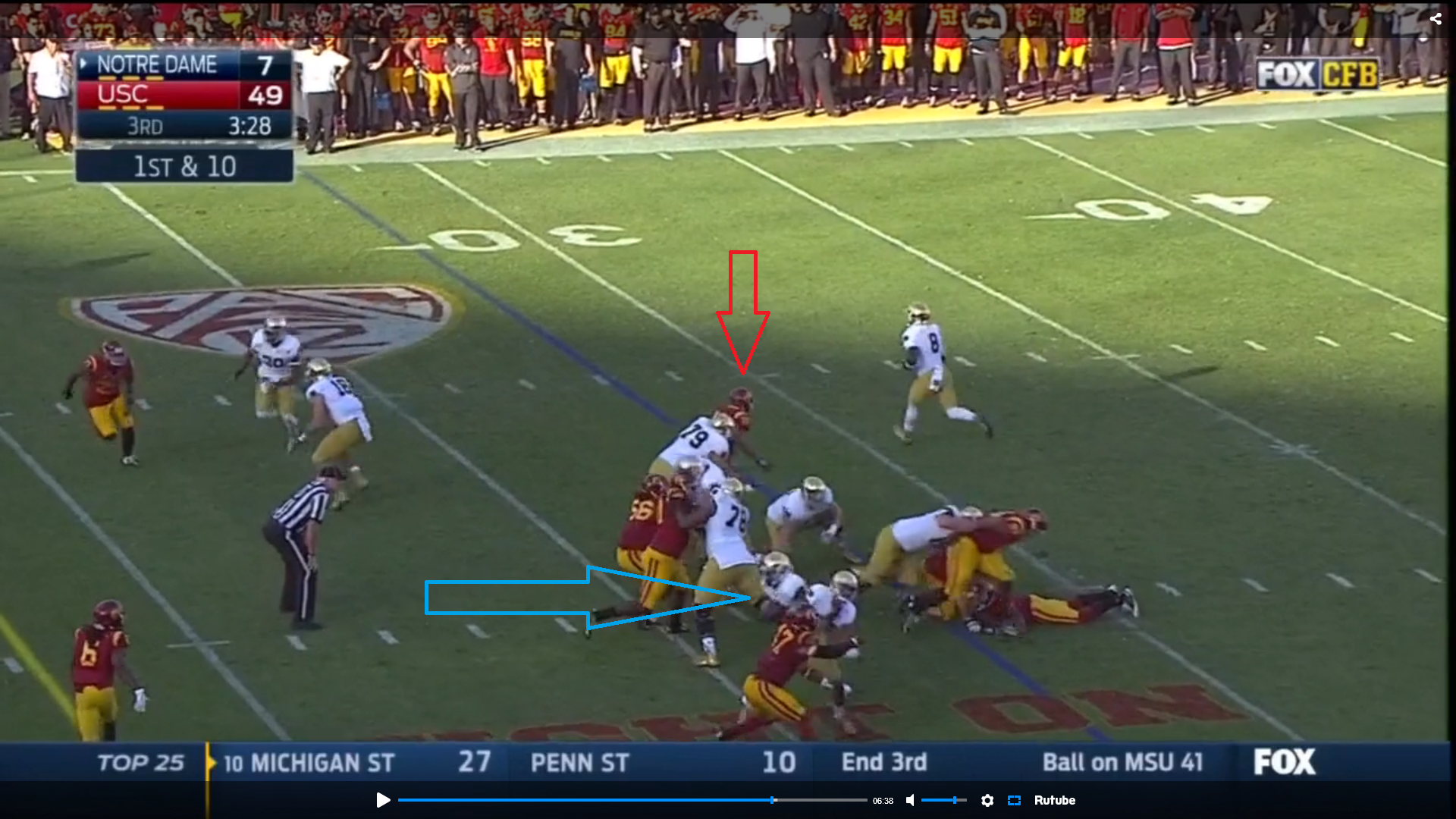 Instead, Greg Bryant breaks free and is off to the races (blue arrow). The backside linebacker, who would have been free to flow across the formation and make the tackle, is headed in the wrong direction, following Malik Zaire (red arrow). Bryant nearly scores on the play and ends up with a 27 yard gain.

There is a noticeable difference when Malik Zaire is at the helm of the Notre Dame offense.  This difference is especially obvious in the run game. Zaire's ability to orchestrate the zone read adds a dimension to the offense that hasn't been present all year. With Zaire in the game, the defense has to respect his running ability. This forces defenders to slow down and react, rather than attack. As well, the defense must assign a player to Zaire in case he keeps the ball. With a defender removed from the equation there is extra space for the running backs. Zaire is more than a one trick pony though. If you sell out against the run, he's good enough to hurt you with his arm.

Everett Golson is a more polished passer (for a comparison of quarterback throwing mechanics, click here); however Zaire is clearly more polished in the zone read game. If I were Brian Kelly, I would play both quarterbacks against LSU. Malik Zaire showed enough promise (albeit in a small sample size) to warrant more playing time. Furthermore, to win the game Notre Dame will need to run the ball effectively and the run game is better when Zaire is on the field.

Ultimately, I think Everett Golson will get the lion's share of the reps against LSU and will be the starting quarterback in 2015. But Malik Zaire has closed the gap and deserves an opportunity. If nothing else, I hope this competition elevates the play of both quarterbacks.  It would be nice to have something to cheer about as the 2014 season ends.