OFD Films: Disaster in the Desert

Why so many turnovers?

Share All sharing options for: OFD Films: Disaster in the Desert

"And all our yesterdays have lighted fools the way to dusty death. Out, out, brief candle!" Shakespeare could have easily been referencing Notre Dame's playoff hopes when he wrote this.  The playoff dream died a brutal, gut wrenching death the past Satruday. In the heat of the desert the Irish spent the first half of the game wandering, hopelessly lost. The second half, proved to be a mirage disguised in the form of a comeback that would fall bitterly short.

To some, the horror show in Tempe served as a reminder that the beautifully flawed 2014 team had been living on borrowed time (some of those people even wrote about potential flaws on August 5, 2014). To others, it was the shocking end to a dream that saw the Irish overcoming all odds and making a run at the playoffs. No matter where you find yourself on this spectrum, a myriad of unanswered questions remain. The most pressing question? Why did the Irish turn the ball over so much? Was it a skittish quarterback being asked to do much? Was it suspect play calling? Were the Irish flat? Was ASU just that good? Was the offensive line to blame? Or the running backs?

Let's take a look at the film and see if we can answer some of these questions. 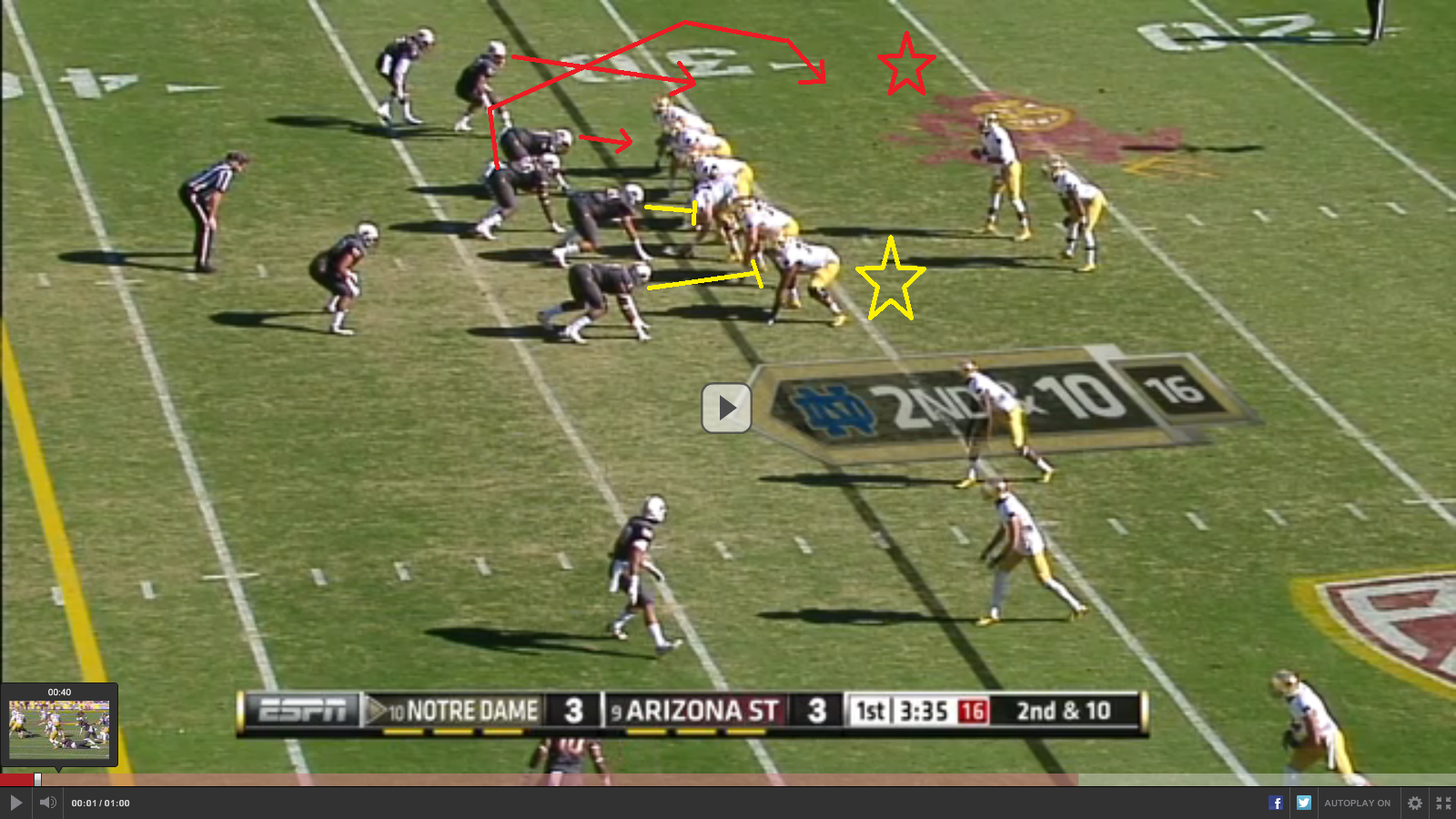 Get used to seeing this scheme from the Sun Devils. They used it extensively during the game. The basic concept is to blitz one side of the offense (red star) and play passive on the other side (yellow star).

In this example Arizona State blitzes off the edge and runs a twist with the defensive tackle (red arrows) It's pretty obvious where the blitz is coming from and ASU doesn't attempt to hide it. Opposite of the pressure side, the defensive linemen don't attack (yellow lines). In fact, they barely even engage. This is by design and will become very important later. 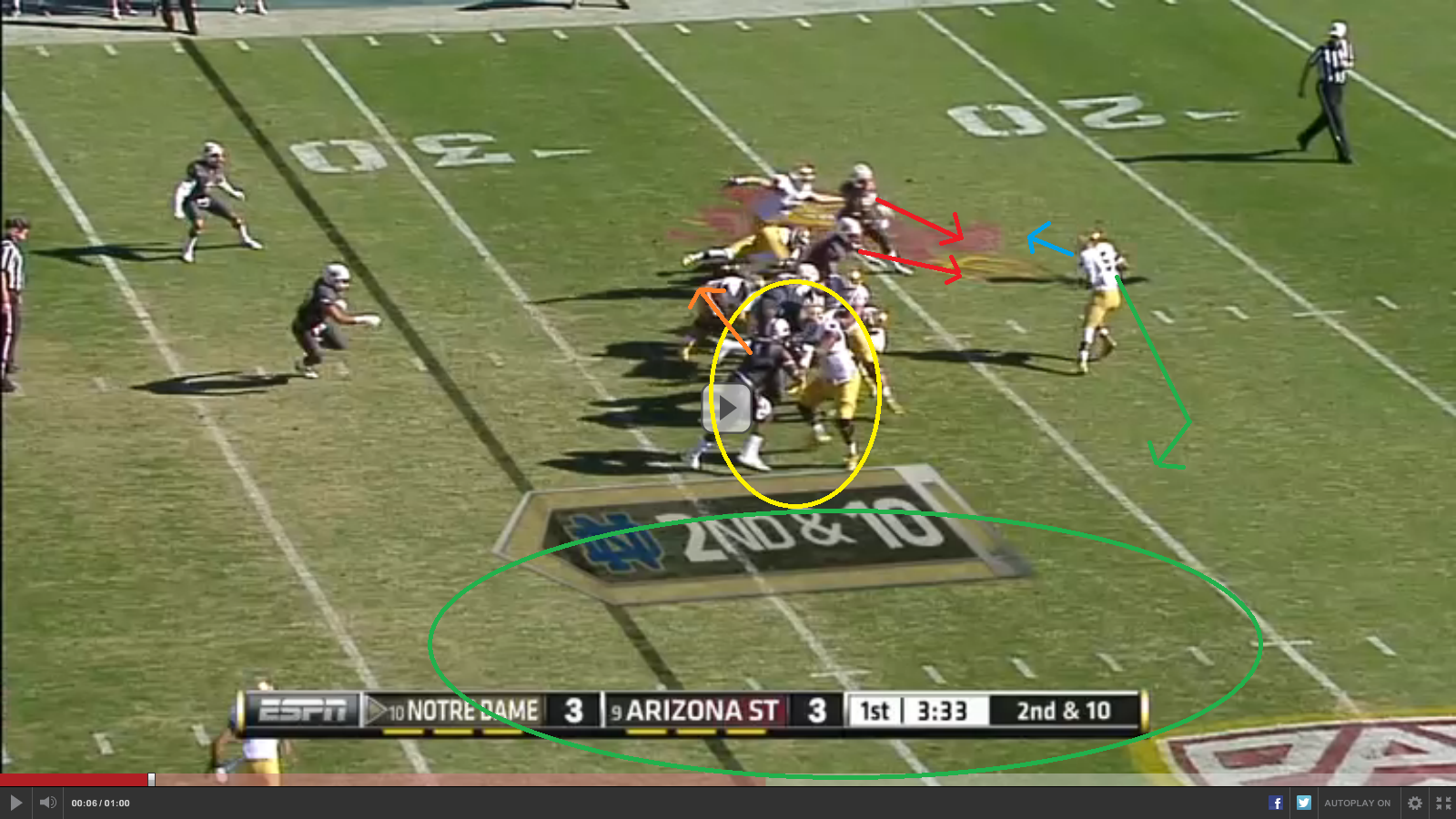 This is the play where Everett Golson (# 5) stumbled, hit the ball on the ground and fumbled. Bad luck? Yes, to some degree. The problem is Golson made a poor decision that led to the stumble and fumble. Pre- snap, ASU showed blitz and are now coming hard (red arrows). To make matters worse, the tight end and running back both miss their blocks. Even so, Golson should slide (or run) away from the obvious pressure (green arrow). If he does, he's got plenty of open field to work with (green circle).

Instead he initially scrambles towards the pressure (blue arrow). This is a mental mistake. Golson should have known pre-snap where the pressure was coming from and scrambled away from it. At the same time, the defensive end who is responsible for contain (yellow circle) makes a mistake and moves to the inside (orange arrow) giving Golson even more room to run.

Was it bad luck that Everett Golson fumbled? Yes. Should luck have been a factor? No. If he scrambles in the correct direction, he doesn't get tripped up, doesn't fumble and we're in good shape. This type of mental error should not happen this late in the season

Which way would you scramble? 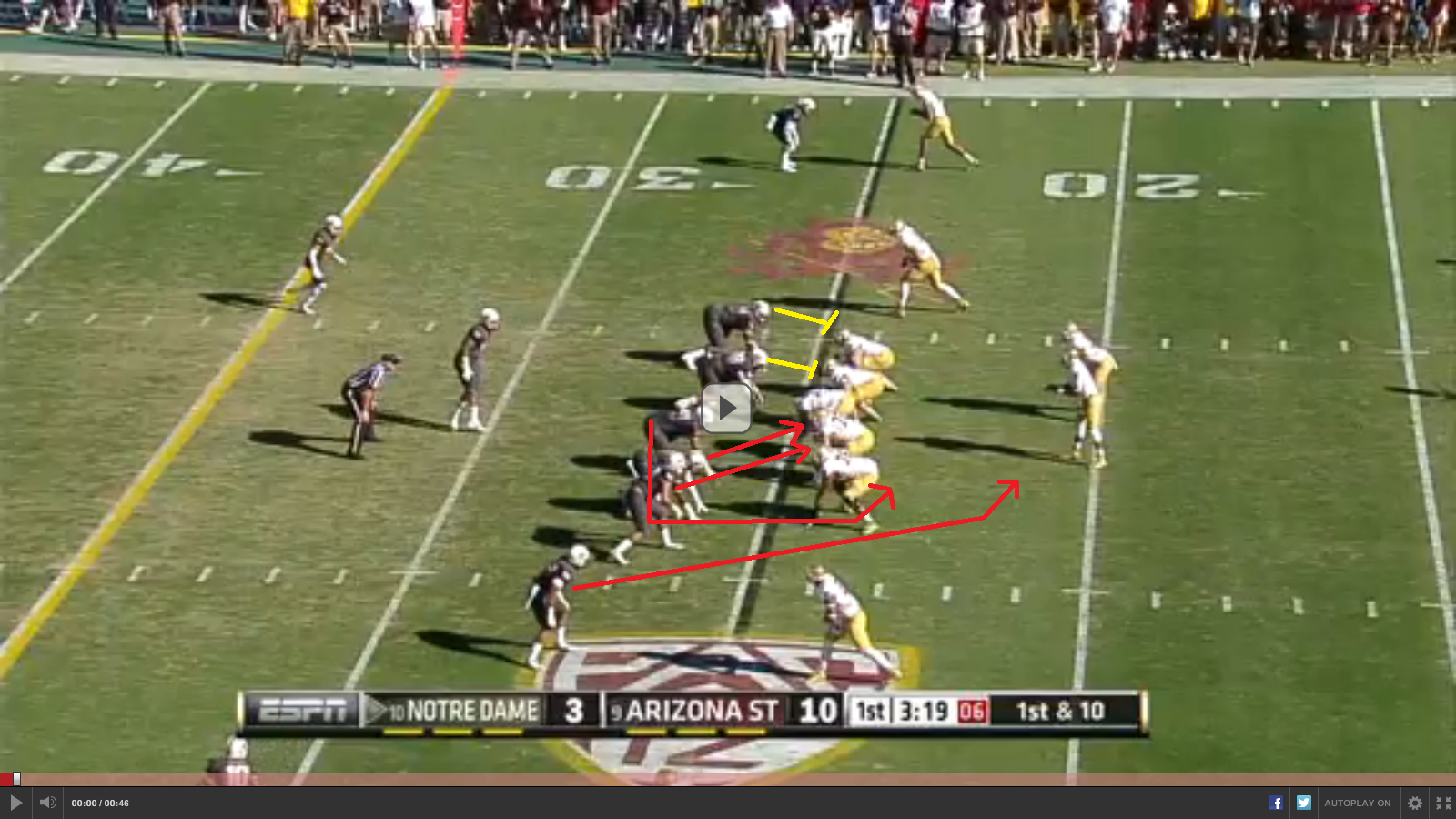 Does this defense look familiar? Overload blitz to one side, combined with a twist by the defensive tackle (red lines). Away from the pressure side, the defensive linemen will play a soft rush technique (yellow lines). 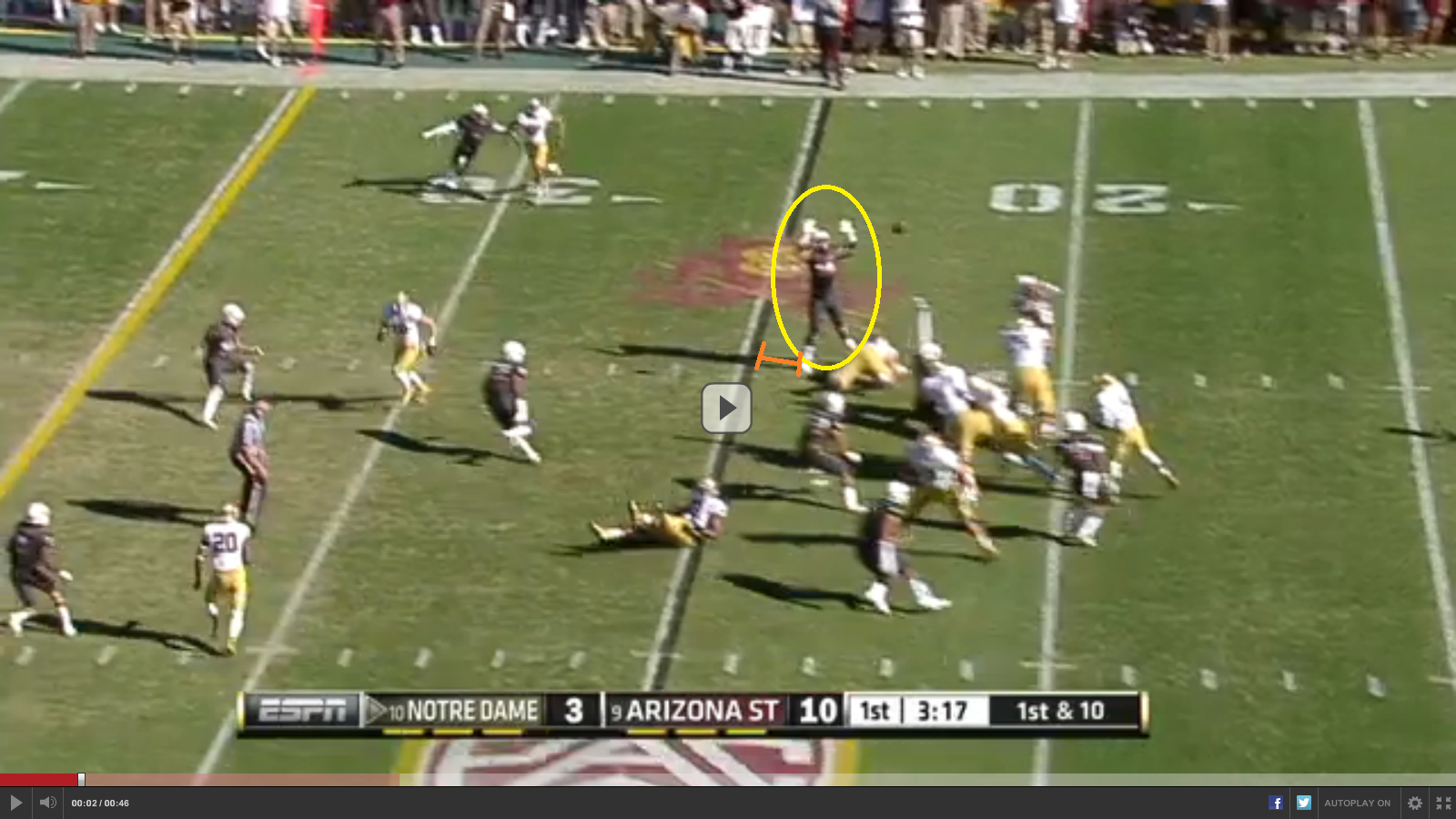 Why does ASU use a soft rush technique away from the pressure side? They know that the QB will have to get rid of the ball quickly, so there isn't much point rushing him. The best way for defensive linemen to disrupt a quick pass is to get in the passing lane and knock the ball down. As you can see the defensive end (yellow circle) doesn't get up field (orange lines). He moves about one yard past the line of scrimmage and then plays for the deflection. 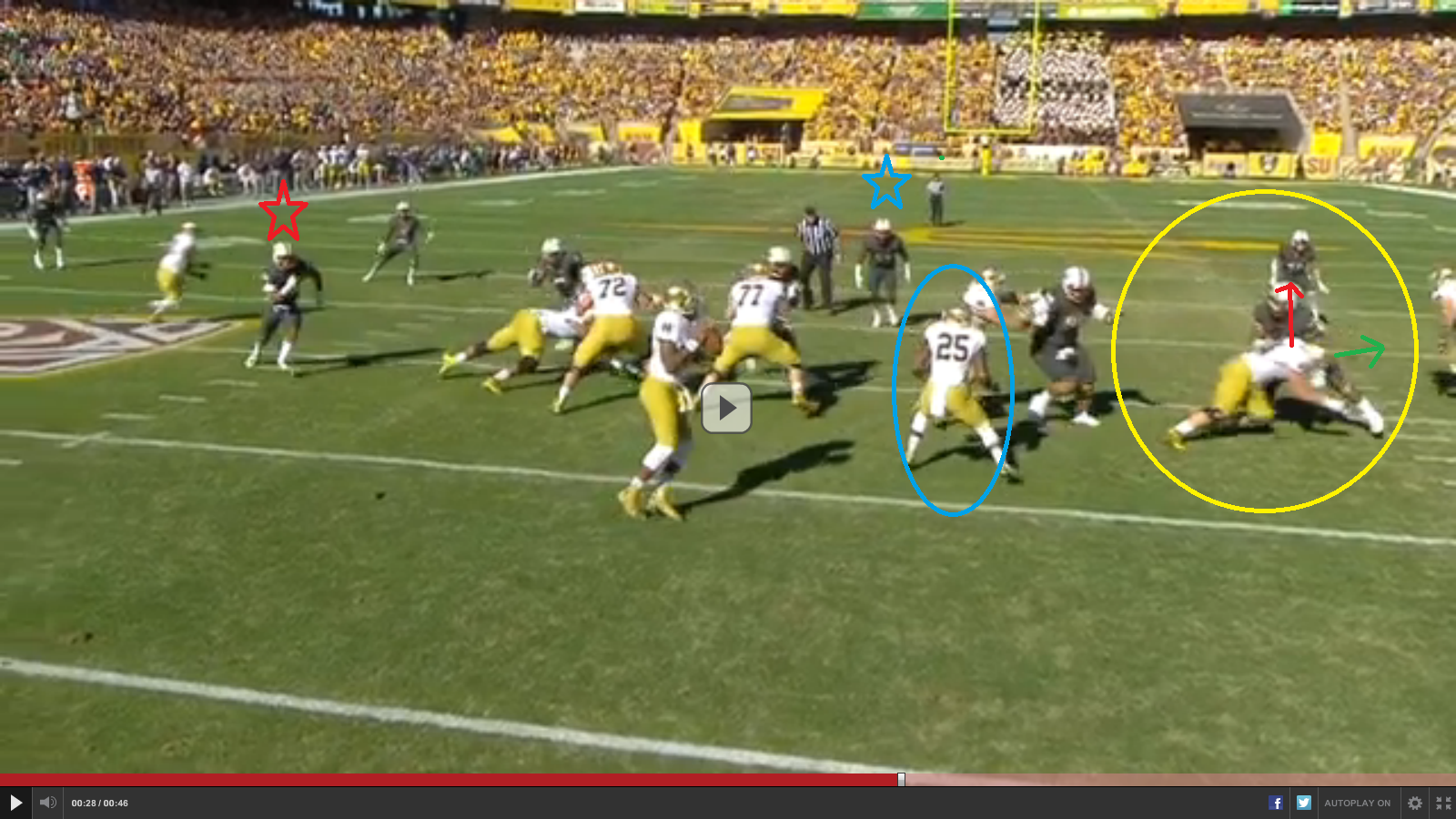 A lot of people wondered why Notre Dame wasn't cutting the Sun Devil defensive linemen. Based on this screen shot it's pretty clear they were trying to (yellow circle). ASU countered the pending cut blocks by not attacking up field. They understood that it's really hard for an offensive lineman (in pass protection) to cut a player that isn't attacking.

Christian Lombard (# 74) does an okay job here. At this point he has succeeded in lowering the hands of the defender. If the ball is thrown now, it doesn't get deflected. To keep those hands down a little longer Lombard should have been moving in the direction of the red arrow, instead of the direction of the green arrow.

As an aside, take a look at Tarean Folston (# 25, blue circle). He ends up blocking no one. I assume he was waiting for the linebacker to blitz (blue star). In the mean time he's oblivious to the defender coming free off the edge (red star).

Watch the defensive end who deflects the ball. He is playing for the deflection the whole way. 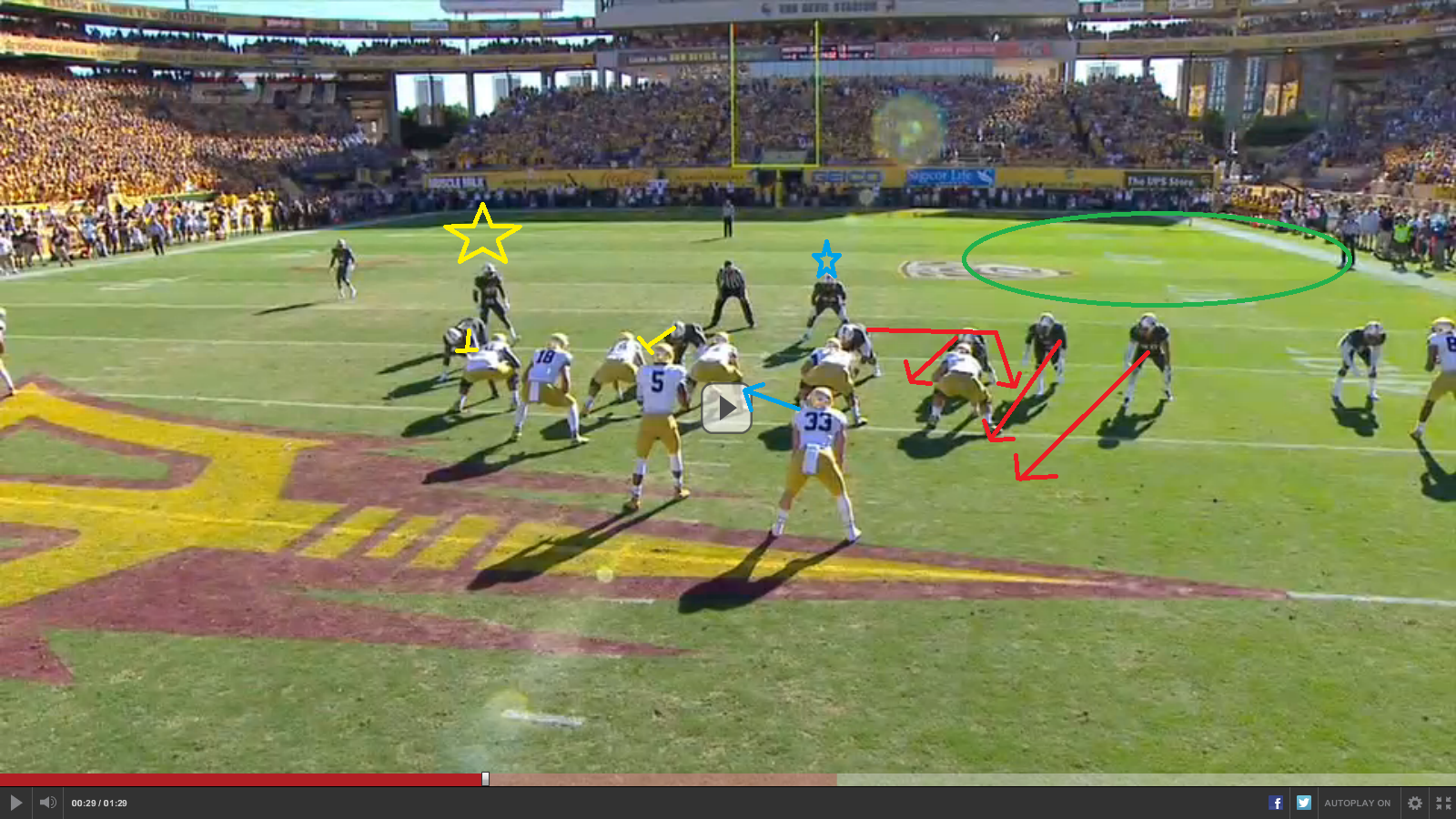 Pretty much the same defensive scheme. Overload blitz one side, with the D-tackle twisting (red arrows) and soft technique away from the blitz side (yellow lines). The middle linebacker (blue star) will follow Cam McDaniel (# 33) on the run fake (blue line).

One of the basic rules when passing against a blitzing team is to throw to the area vacated by the blitz (green circle). Inexplicably the Irish started the game by throwing away from the blitz (go back and take a look at the first interception, they also threw the ball away from the blitz and bad things happened) and continue that trend here.

By throwing away from the blitz, Notre Dame is putting the ball in an area with an extra defender (yellow star). Instead of an area that has no defenders (green circle).

Was it bad luck that the ball was deflected, caught and returned for a touchdown? Yes. However, by throwing to the side where ASU is playing for deflections (and has an extra defender), the Irish greatly increased the chances of the ball getting deflected and intercepted.

If the ball is thrown where the green circle is and gets deflected (make no mistake the twisting defensive tackle is taught to try and deflect the ball), the likelihood of an interception is decreased because no one is there.

Bad luck played a part in the outcome of this play. But so did great scheme by ASU and poor scheme by Notre Dame.

Notre Dame made a very simple adjustment to this problem. Follow conventional wisdom. Throw to the area vacated by the blitz. Not a difficult concept. 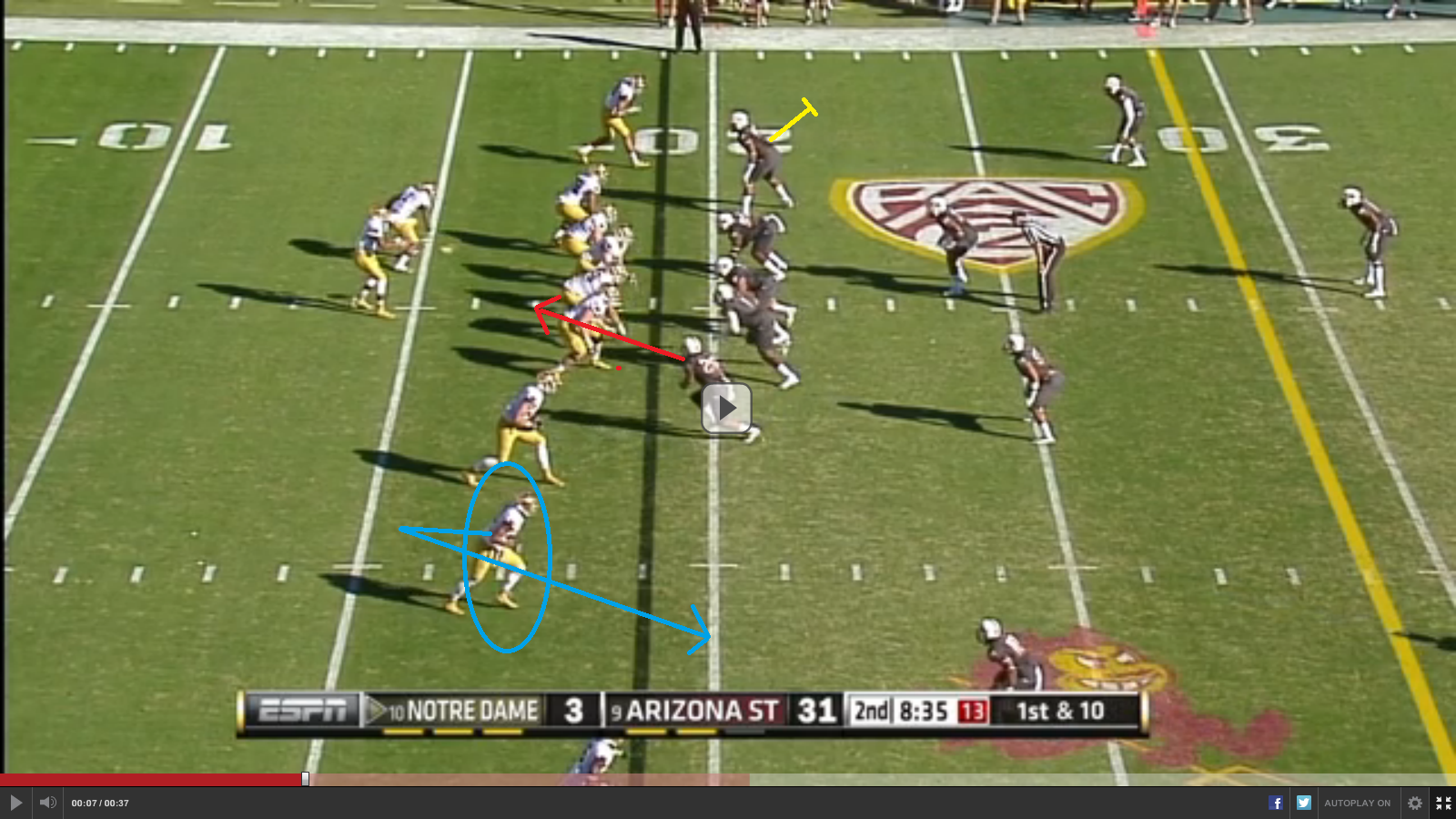 In this example CJ Prosise (# 20, blue circle) is going to take a quick screen (blue line) for big yards because Notre Dame has a numbers advantage due to the blitz (red arrow).

Note the time in the game. We're still in the 2nd quarter. The Irish didn't wait until half to adjust. Sadly, it's tough to comeback from a 31-3 lead. 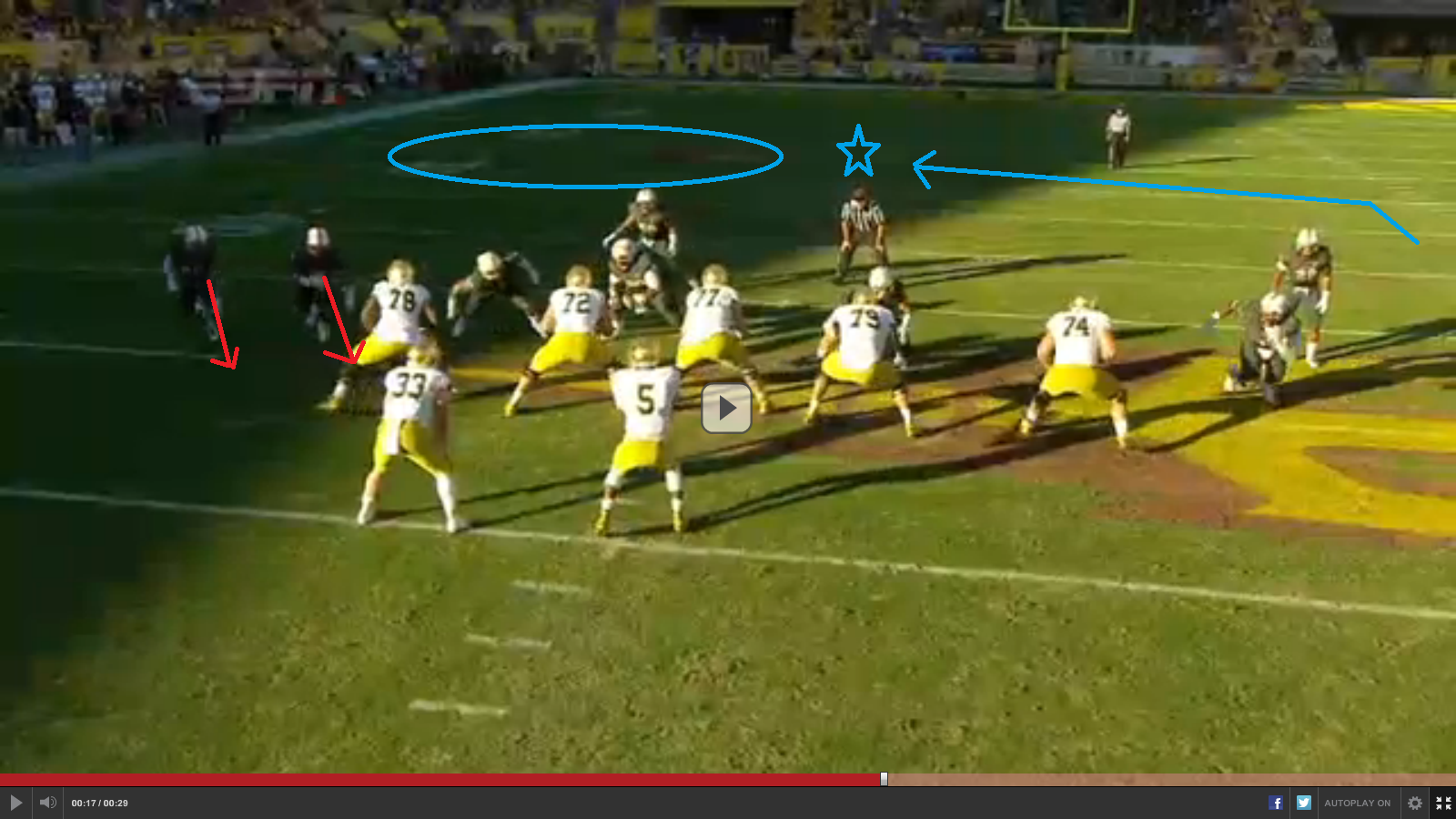 In this screen shot we see the usual pattern. Overload blitz from one side (red arrows). This time the Irish will exploit the vacated area (blue circle) by bringing tight end Ben Koyack (# 18) across the formation (blue line). Koyack makes an incredible catch by the way. 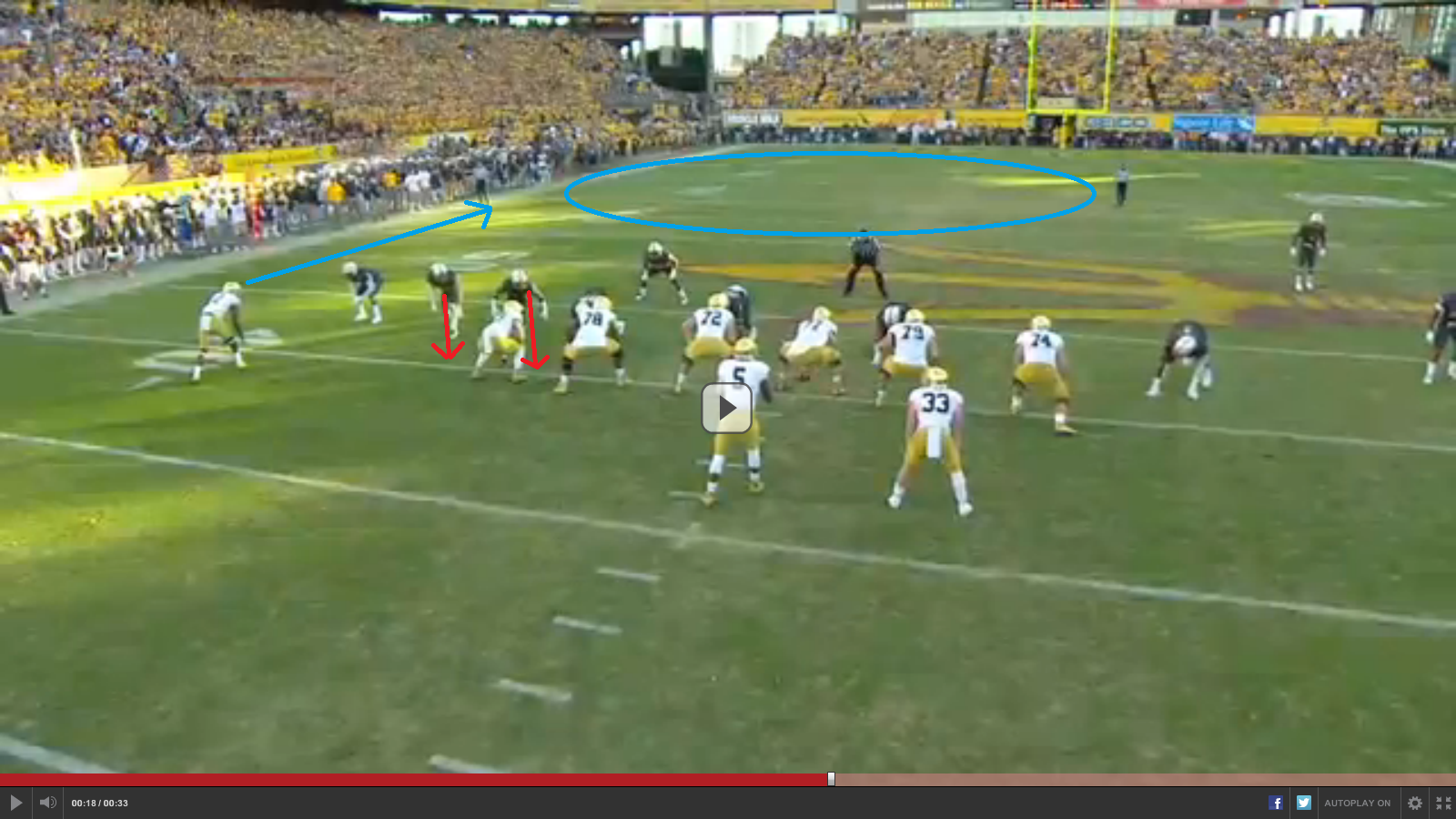 Are you seeing a pattern here? Overload blitz (red lines), throw into the vacated area (blue line and circle), big play. This simple adjustment is working. 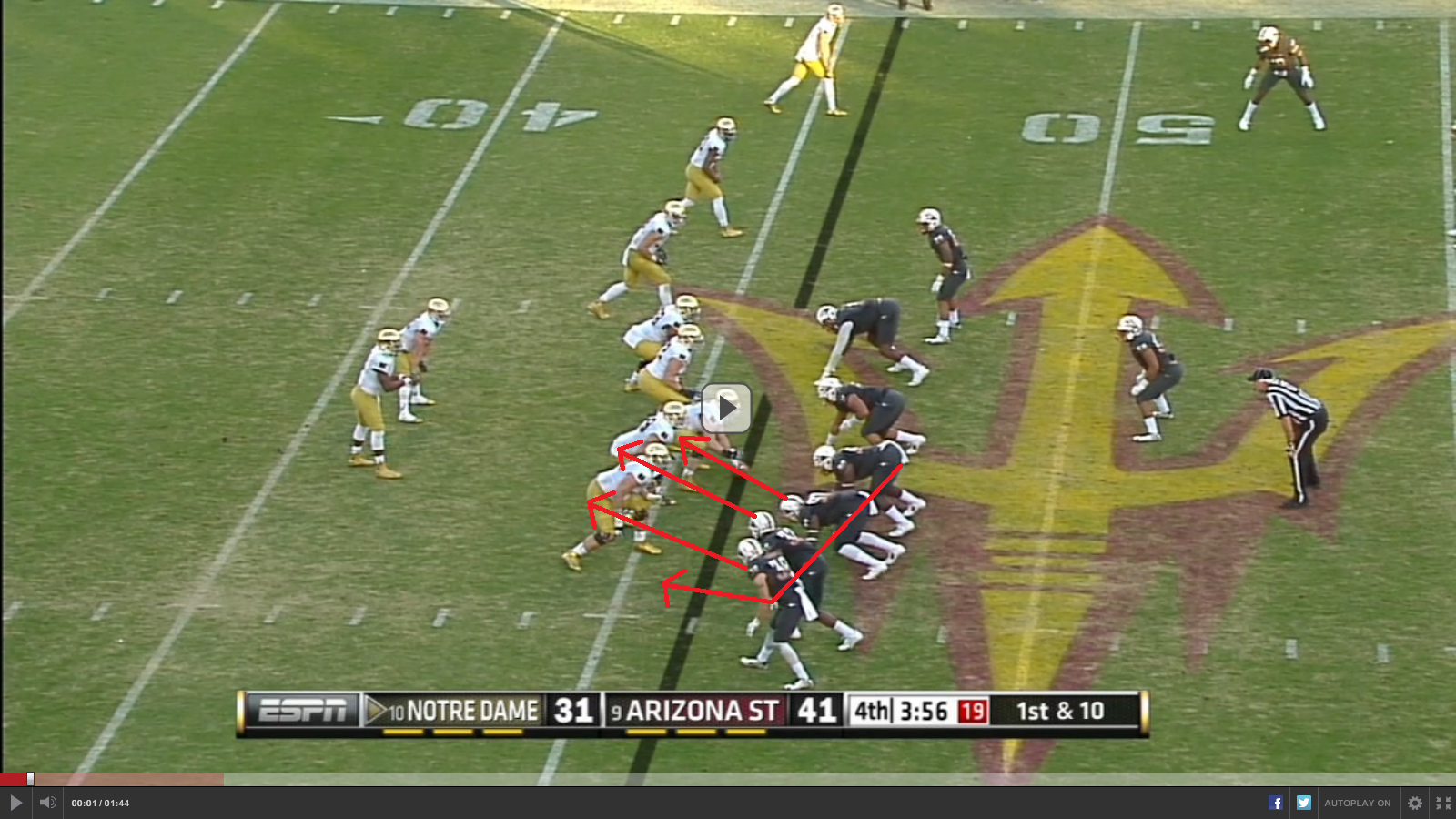 If you're squeamish, you might want to skip to the end. Same defensive scheme, overload blitz with a line twist (red arrows). Throw it to the overload side, correct? 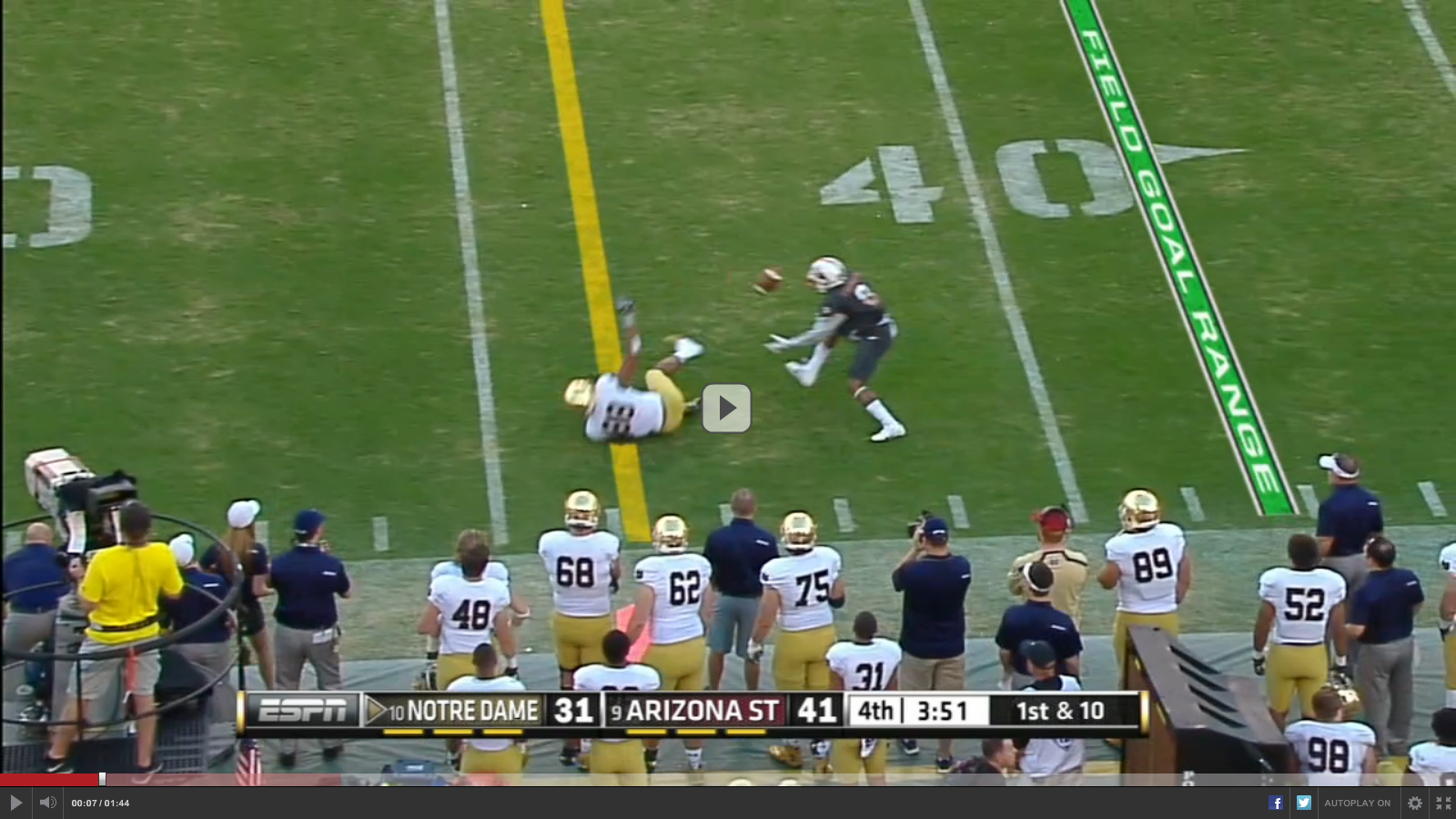 Throwing to the overload side was the correct read. No one around, first down. But you have to catch the ball.

So why did things go so wrong for the Irish? Skittish quarterback? Poor play calling? Good scheme by ASU? Good play by ASU defenders? Bad luck? The answer is yes. All of these elements played a role in the Irish defeat. ASU had a very good game plan and executed it. Overload to one side, play soft on the other side. The Irish figured it out. They started to throw to the blitz side instead of away from the blitz. This resulted in a number of big plays and helped get Notre Dame back in the game. Unfortunately, it was too little too late. Tough pill to swallow.