The game I had circled on my calendar all year is finally upon us.  Notre Dame is going up against arguably the best special teams return units it will face all season.  Here's what the Irish are going to see on special teams from the Cardinal, with the kicking units first.

Stanford's primary kicker from the tee is Jordan Williamson.  Williamson is a serviceable kicker from the kickoff tee.  He has 21 kickoffs on the season for 1,322 yards, 9 touchbacks, and 1 out of bounds.  He averages 63 yards per kick.  His average net is 44.6 and the average starting yard line for the Cardinal's opponents off kickoffs is the 20 yard line.  Williamson does not touch back every kick but his coverage unit is very good at getting down field in a hurry.  Stanford's opponents have only managed 10 returns for 161 yards, an average of 16.1, with a long of 25.  My advice would be as follows: down the ball if it's in the end zone and if not, run like the wind and find a hole, or create one if you can't find one.  The goal should be to get to the 25 and against Stanford, this is going to be tough.  Bryant will likely see some changes at returns, since Williamson is middling roughly around 43% for touchbacks.  ND needs to be disciplined and block, and Bryant needs to get more confidence and run like he knows how to run.

EDIT (because I am terrible at math): If Notre Dame can keep Stanford's offense outside the 30's, I have a hard time seeing Williamson be a true threat in this game.  He has not shown me the consistency that is common among the automatic kickers in college football.

Ben Rhyne is Stanford's primary punter and he is adequate--not fantastic but not mediocre.  He has 15 punts on the year for 582 yards.  His long is 51, he has 4 touchbacks, 3 fair catches, 7 inside the 20, and an average of 38.8.  His only punt over 50 yards was his longest at 51.  Stanford has allowed 5 returns for 8 yards, bringing Rhyne's net average down to 32.9.  This 32.9 average is very mediocre.  However, given the lack of distance obtained on these punt returns, it is likely that Rhyne just does not boot the ball that far and thus does not give the return team time to prepare. 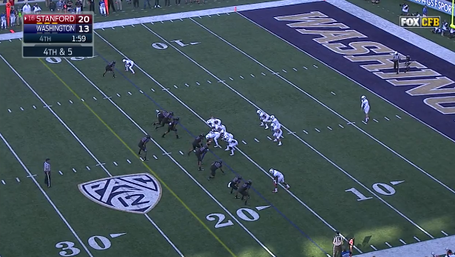 Stanford is ranked #4 in the US News and World Report Rankings of Undergraduate Universities, higher ranked than #29 Michigan, and this means that they are smarter than Michigan--which explains why Stanford uses the spread punt formation.

Notre Dame is going to have trouble returning punts on Saturday.  It is possible, because Stanford does not do anything different than the normal, non-Michigan, spread punt teams, but the combination of the coverage team's effectiveness and the punter's weak leg leaves me to believe that it will be difficult to get good punt returns Saturday.  Anything is possible, though, and if ND can effectively block the coverage team, Riggs might have some opportunity to get a few yards.

I figured I might as well combine both sections since the same guy does both.  This would be the man of the hour, the king himself, arguably the greatest kick returner in all of college football: Ty Montgomery.  Coming into the season, there were two return men that I feared: Ryan Switzer from UNC and Ty Montgomery (with Nelson Agholor a close third).  Ty Montgomery is just an absolutely dynamic, explosive return man.  What he has been able to do in his career is extraordinary.  This is his first season punt returning and his 37 yards per return average this year against UC Davis is ranked #1 in Stanford's record books--in history.  Yes it is UC Davis, but 37 yards per punt return is fantastic.  His 204 kick return yards last year against Washington is #1 in Stanford's record books.  He holds spots #2 and #4 in total kick return yards in a season, #1 in kick return yards for a career, #3 in average kick return yards for a season (last year), #1 in kick return yard average for his career, and is tied at #1 for kickoff returns for a touchdown in a game, over a career, opening kickoffs returned for touchdowns, and longest returns for a touchdown.

This season, from punts, Montgomery has 6 returns for 131 yards, a long of 60, and one touchdown.  Here is the touchdown:

As you can see, Montgomery is just absolutely deadly in space.  It certainly helped that UC Davis was significantly less athletic than Stanford, but this just gives you the idea of what Montgomery is capable of if he is given even an iota of space.  He has excellent vision, is quick on his feet, and explosive speed.  The only other player to field a punt return for the Cardinal this season is Christian McCaffrey, son of retired NFL wide receiver Ed McCaffrey.  He has 3 returns on the season for 60 yards with a long of 41.  All three came against UC Davis when Stanford had a comfortable lead and I would be very surprised if we saw him take any on Saturday.  The only way Ty Montgomery will not be on the field is if he gets injured.

While he is very lethal from the punt return, he is even more deadly from kick return.  Last season, he had 36 returns for 1,091 yards, an average of 30.3 with 2 touchdowns.  He has been kept in check this season, however his explosiveness cannot be ignored because of his seemingly average stats this season.  So far, Montgomery only has 5 returns for 149 yards, an average of 29.8, with a long of 62.  It seems that teams have caught on the his explosiveness because if you take away the 62 yard return, he is only averaging about 21 yards per return, so teams have done a very good job at keeping him in check.  Still, he is capable of doing this (return last year vs. Washington):

As you can see from the video, Washington hurt themselves by not having anybody in the marked lane.  Stanford smartly realized this and because of Montgomery's explosiveness, he essentially scored the touchdown before he even got through the coverage team.  Because of the vacant lane, 2 of the 4 men back with Montgomery were able to run through the hole in front of him and pick up two curling players, leaving Montgomery with only the kicker to beat.  Fantastic recognition,

Excellent coaching, excellent strategy, and flawless execution is going to get the job done on Saturday.  For a player that is averaging what Montgomery is averaging and for the explosiveness he possesses, Notre Dame's gameplan to combat him going into this game should be to do everything to keep it out of his hands.  On kickoff, there are three possibilities:

Kicking the ball out of the back of the endzone should be Kyle's goal going into each and every kick.  He has been very good at doing it this season.  However, this is not guaranteed.  It is possible to hangtime/pooch/squib kick to prevent the deep threat from Montgomery as well.  This would involve Kyle kicking it across the ground, deadening the ball around the 25-30 yard line, or hanging the ball up short in the air long enough to either force a fair catch or a short return from one of the up backs.  Both possibilities (pooch/hangtime and squib) would leave the Irish with poor field position as compared to the touchback kickoffs, but they are guaranteed.  The third possibility I listed should be an utter last resort, i.e. if nothing works.  Now, in the event Montgomery does return the ball, ND needs to maintain their lanes like they did against Syracuse.  If they do what Washington did in the video above, that will be another TD in the record books for Montgomery.
On punts, the game plan is easier: kick the ball out of bounds.  None of Kyle's punts on Saturday should land in bounds.  The only ones that I would be ok with would be the hangtime punts for fair catches inside the 20, but even then I would be screaming at him to punt to the pylons (coffin corner).  Kyle should be aiming for the pylons on every single punt and boot the punts into the third rows of the stadium if he can.
As always, I welcome your questions and comments below.