What light through yonder blocking sled breaks?
Tis the playoff, and the National Championship is the sun!

My friends, I have lived, I have cheered, I have ridden the waves of soaring adulation and joy. However, I have also suffered, I have cried, I have anguished in utter sorrow and wished to see death at my door. This was me in the waning seconds following last week's game. It was made even worse to have to admit after reading Rogers Redding's take on the Unspeakable Horror that the correct call was made and ND truly did deserve to lose the most important game of the season. My Kelly Green glasses must be destroyed and I have to see this objectively. ND committed a penalty and warranted their removal of a score.

I have moved on, however. Like the team, I realize that the games continue and not all is lost. ND is sitting very pretty at #7 in the nation and definitely within striking distance of the playoff. Does anyone REALLY think 3 ESSEESEE teams will be put in the thing? I don't. So with that knowledge and hope I am able to carry on. We have a new and very familiar opponent chopping at our door ready to wreak havoc on the knees of every single defensive player on our side. The Middies of the Naval Academy have perfected one thing, and one thing alone...cut blocks. 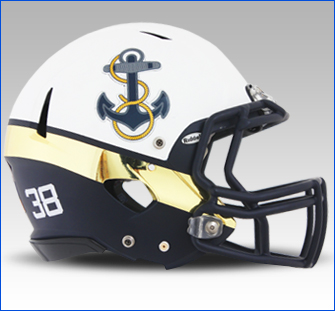 Much consternation abounds concerning this practice. Rules committee members have spoken out against it, Dr. Redding has gone on many times about his belief that within 5 years the low block will be 100% illegal. If you're a fan of the practice, you'd better get your fill in while you can because the rules have been making it harder and harder to commit this act every other year when new interpretations and changes are made. The end goal will attempt to mirror how high school football (outside Texas) deals with low blocks which is to make them completely illegal anywhere on the field at any time. Here's what the current edition(2013-2014) says verbatim(Images and emphasis are mine):

"Blocking Below the Waist

ARTICLE 6. a. Team A prior to a change of team possession: Consider a low-blocking zone seven yards on each side of the snapper extending five yards beyond the neutral zone and back to Team A's end line

1. The following Team A players may legally block below the waist inside this zone until the ball has left the zone:

(a) players on the line of scrimmage completely within this zone

This has set up the parameters of what will follow. The only people who may legally block low are interior linemen and backs. Anyone else is determined to be RESTRICTED as to when and where they can block low. Even for these UNRESTRICTED players, they can only low block while the ball is in this 7-yard zone. After that, they become RESTRICTED players just like WR.

The philosophy basically is "blocking below the waist is illegal." Here are the times where it becomes LEGAL:

"From the front" is understood to mean within the clock-face region between "10 o'clock and 2 o'clock" forward of the player being blocked. 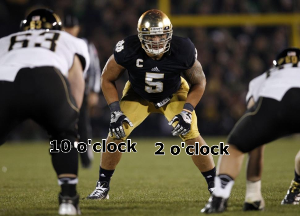 3. Once the ball has left the zone a player may not block below the waist toward his own end line.

4. Players not covered in paragraph 1 (above) may not block below the waist toward the original position of the ball at the snap.(THIS IS THE TRADITIONAL CRACKBACK)"

Team B prior to a change of team possession

1. Other than in paragraphs 2 and 3 (below), players of Team B may block below the waist only within the area defined by lines parallel to the goal line five yards beyond and behind the neutral zone extended to the sidelines. Blocking below the waist by players of Team B outside this zone is illegal except against the ball carrier. (Which in the common tongue is called TACKLING)

2. Players of Team B may not block below the waist against an opponent who is in position to receive a backward pass.(But you CAN interfere with them...future discussion)

3. Players of Team B may not block below the waist against an eligible Team A pass receiver beyond the neutral zone unless attempting to get to the ball or ball carrier. This prohibition ends when a legal forward pass is no longer possible by rule.

Finally, these two apply to both the offense and defense:

During a down in which there is a free kick or scrimmage kick, blocking below the waist by any player is illegal except against a ball carrier.

d. After change of team possession

After any change of team possession, blocking below the waist by any player is illegal except against a ball carrier.

Both of these are very dangerous. Low blocks on change of possessions are usually when players are not expecting a low block and tear knees and break ankles. Very bad. This is one of those situations where the penalty does not have a "point of attack" criteria attached to it. Much like personal fouls and unsportsmanlike conduct, if this happens ANYWHERE on the field, the flag should come out because this is a major safety issue.

All of this has been changing for a number of years. In 2010, blocking below the waist was legal and only in 5 or so situations was it an illegal act. In 2012, the philosophy was changed and the wording in the rulebook reflected this to make it generally ILLEGAL. In the first attempt to limit the practice, there was an extremely confusing and difficult definition to try to rule on. Basically, a receiver could only block towards his "adjacent sideline." It was a mess to both officiate and play using this rule and, thankfully was re-written.

I've been watching us play Navy for a few years now and they've done a really masterful job at navigating these waters. Slowly, their style of football is being phased out but they are still managing to operate JUST within the parameters of this rule. Remember this Saturday, not all of their blocks that go below the waist will be illegal. Be sure to watch where the ball is when the block takes place, who makes the block, and where it occurs on the field. Happy officiating, get the big ones. 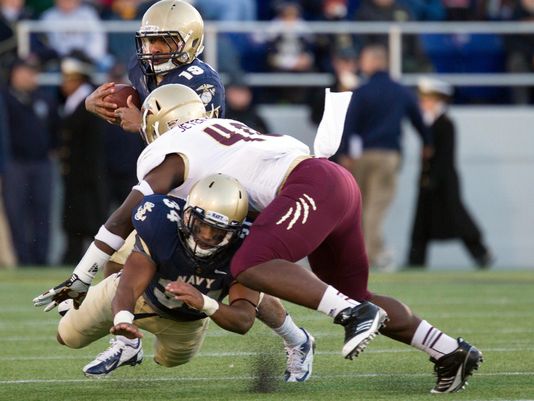 Both of these videos are compiled and commented by Terry McAulay, NFL Referee