The X's and O's behind the play that everyone is talking about.

In "The Unforgiven III" by Metallica, James Hetfield sings about causing pain with careless dreaming. Notre Dame fans can relate. For a brief moment, it seemed as though our "careless dreams" of beating the defending national champions and reigning Heisman Trophy winner would come true. For a split second, euphoria. The Irish had ended the Seminoles' 22-game reign of terror on the college football world. But there it was. A single piece of yellow cloth lying crumpled in the end zone.

Like all Notre Dame fans, I was incredibly disappointed that Notre Dame lost. Having said that, I thought it was a great game and both teams played well. I have no problem with FSU winning. Truth be told, I'm not that upset by the penalty call that negated the game-winning touchdown. When I coached, I always told my players that games are never won or lost on one play. People will always remember the play at the end of the game, but it's simply one play in a series of plays that lead to the final outcome. If it comes down to one play, the breaks might go your way; they might not. You take your chances.

While the national media debates the call by the referees, we're going to look at the play through the lens of the OFD Film Room. From an X's and O's perspective, Notre Dame had FSU beat on that faithful play. No question about it. It was an excellent call that exploited the way FSU was defending near the goaline. Unfortunately for the Irish, they made some mistakes executing the play which led to a penalty. Let's take a look at the film, and I'll show you what I mean. 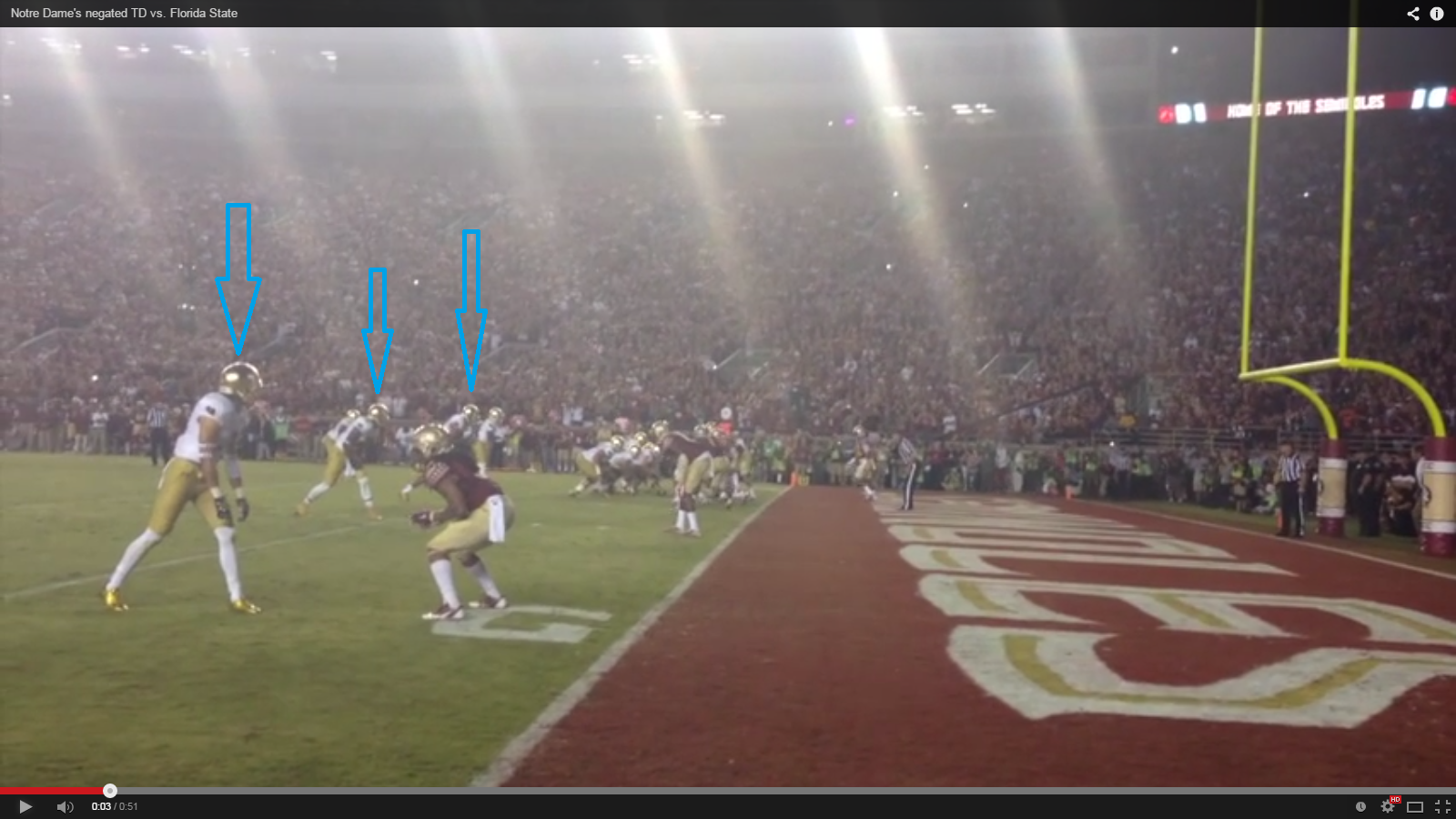 If you were watching on TV, you likely missed this adjustment. Notre Dame initially comes out with three receivers spread out (blue arrows). This is by design. Brian Kelly wants to see what sort of coverage FSU is going to use. If FSU decides to play off coverage or looks like they are in zone, Notre Dame would likely keep their receivers spread out. Since FSU is playing tight man, Notre Dame adjusts alignment. 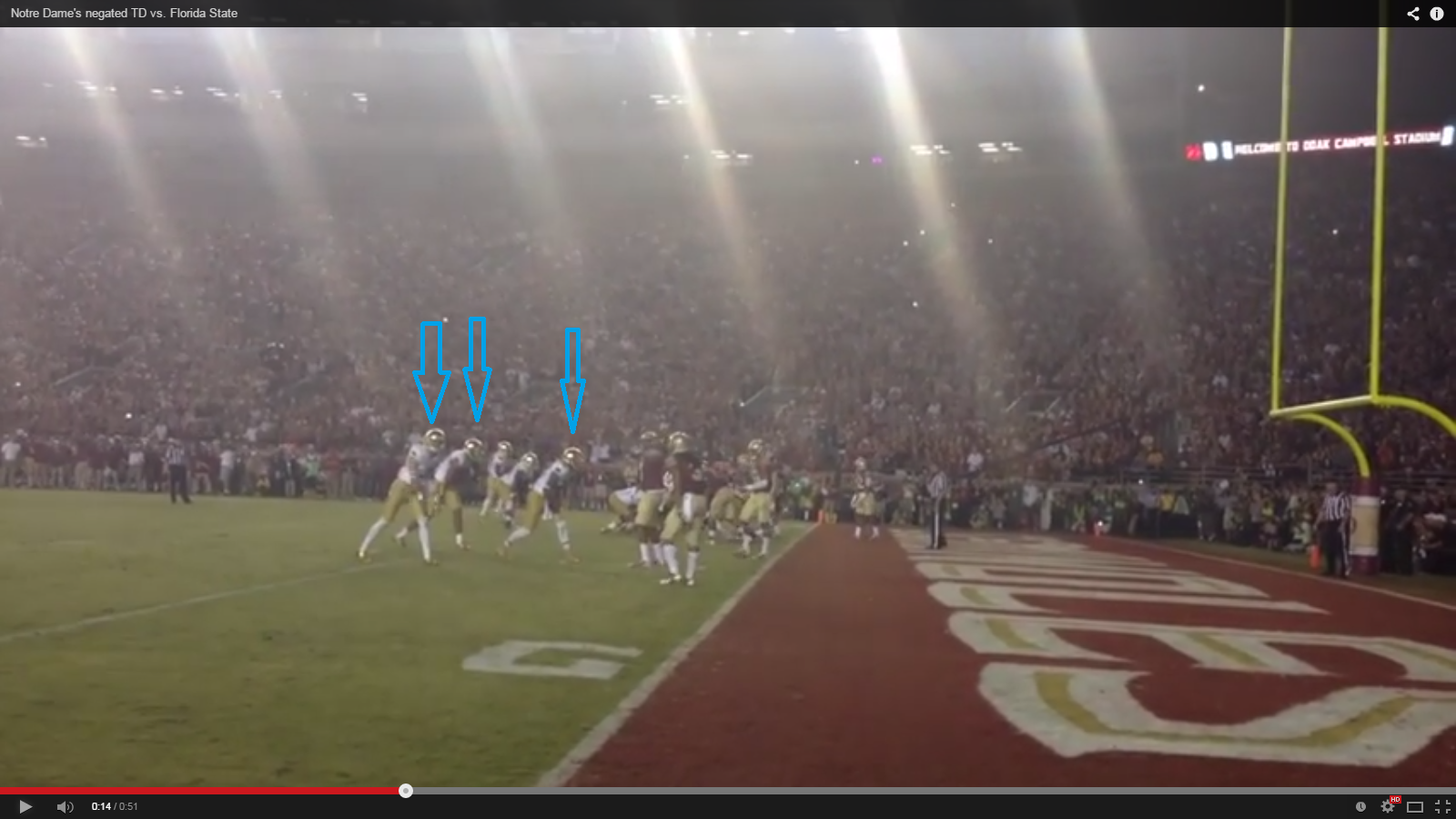 Notre Dame moves into a bunch set. This set is designed to exploit a flaw in FSU's man coverage scheme. 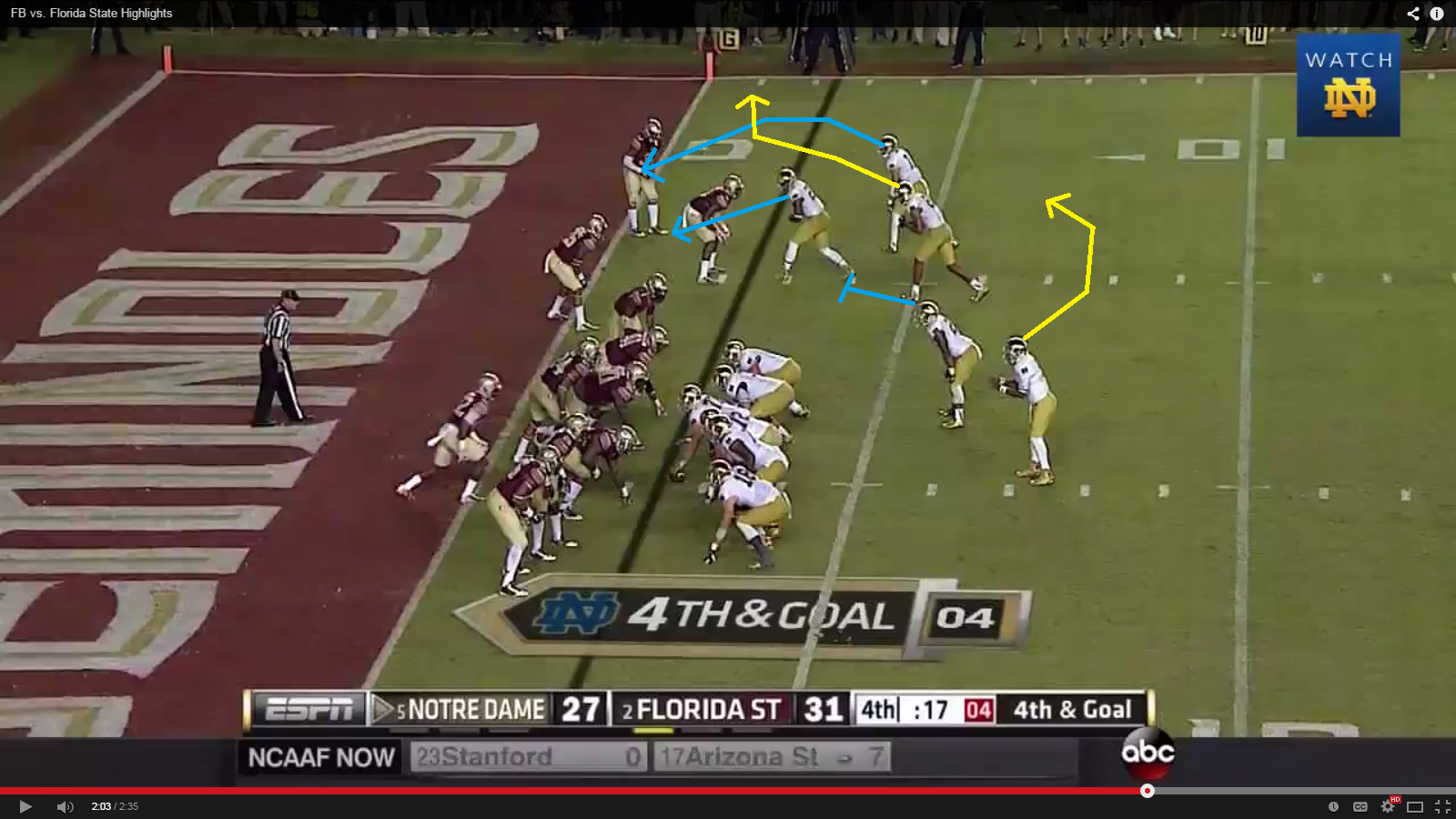 Golson has a run/pass option. He is going to look to Corey Robinson # 88 (yellow arrow) first. If Robinson isn't there, Golson can tuck it and run. 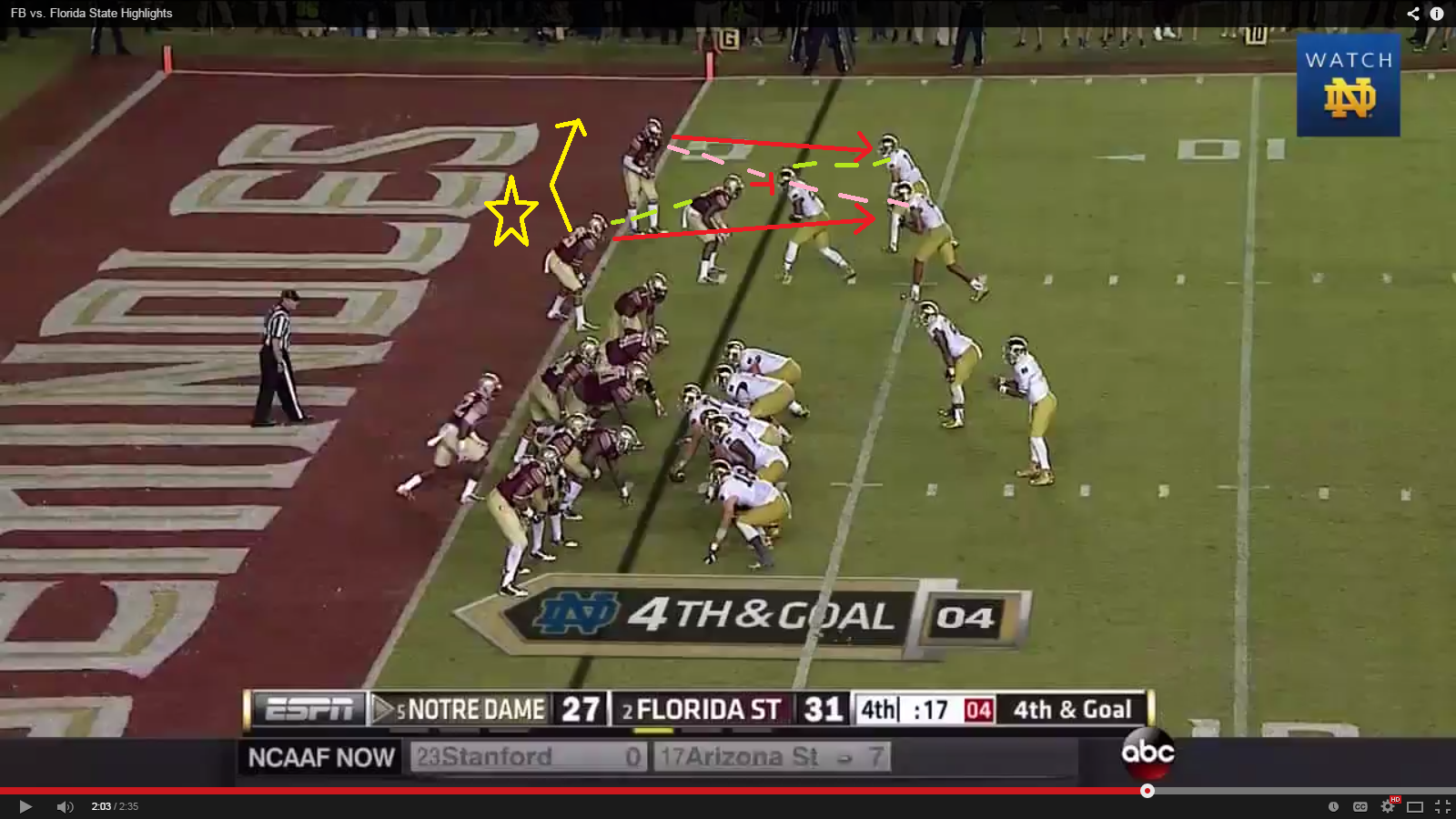 Florida State is going to play straight man coverage (red arrows). Notre Dame knows this, because it's what they played on the first touchdown to Robinson and what they showed pre-snap.

That's why Kelly had Notre Dame adjust into a bunch set. It is almost impossible for FSU to stop Notre Dame from gaining the 2.5 yards necessary to win the game by playing straight man coverage against this alignment. The reason? When Robinson releases to the outside, the defender responsible for coving him PJ Williams (yellow star) will have to go around the other players (yellow line). This creates a natural separation, giving Robinson enough space to make the catch and at the very least use his long reach to get the ball across the goaline.

Most teams adjust to this scenario by playing a switch technique (often called a banjo call). The outside defender (Ronald Darby # 3) reads Robinson (pink dotted line). When Robinson releases to the outside, he covers him. The inside defender (PJ Williams  # 26) reads Fuller (green dotted lines). When Fuller comes inside he takes him.

FSU doesn't make this adjustment (and they didn't all game). They seemed content to play straight man coverage. Brian Kelly knew this and called the perfect play to exploit what FSU was doing. 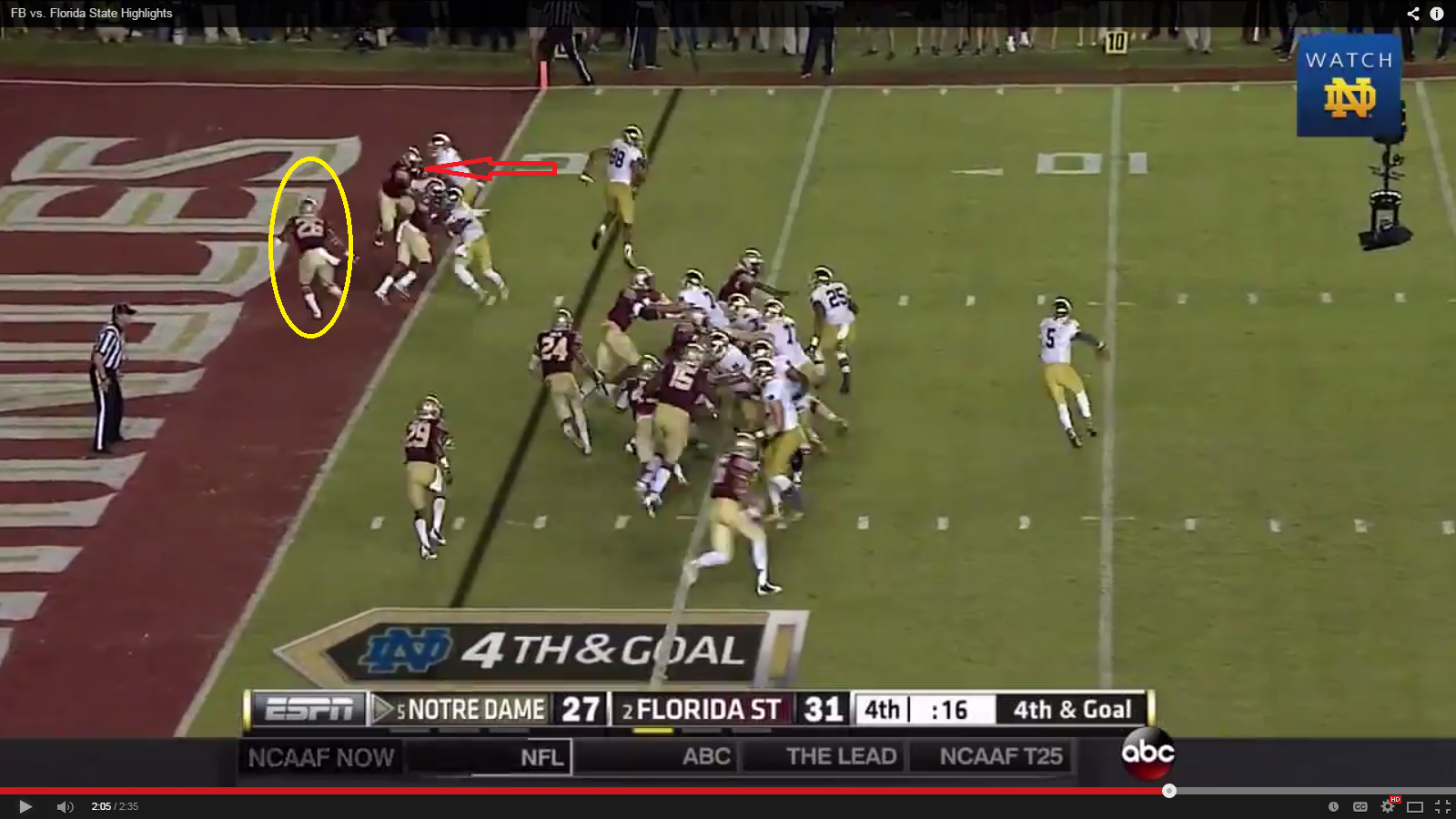 PJ Williams (# 26) yellow circle is responsible for covering Corey Robinson. As previously mentioned there is no way he is going to get there in time. As an aside, note the technique that Ronald Darby (# 3) uses. He works to the inside of Will Fuller (red arrow). For the record, Darby wasn't pushed into this location he moved there on his own and then Fuller made contact.

From an X's and O's perspective, Notre Dame wins this play. No doubt about it. They have the right play call for the type of defense of FSU is using. Unfortunately, it's not always just about X's and O's. 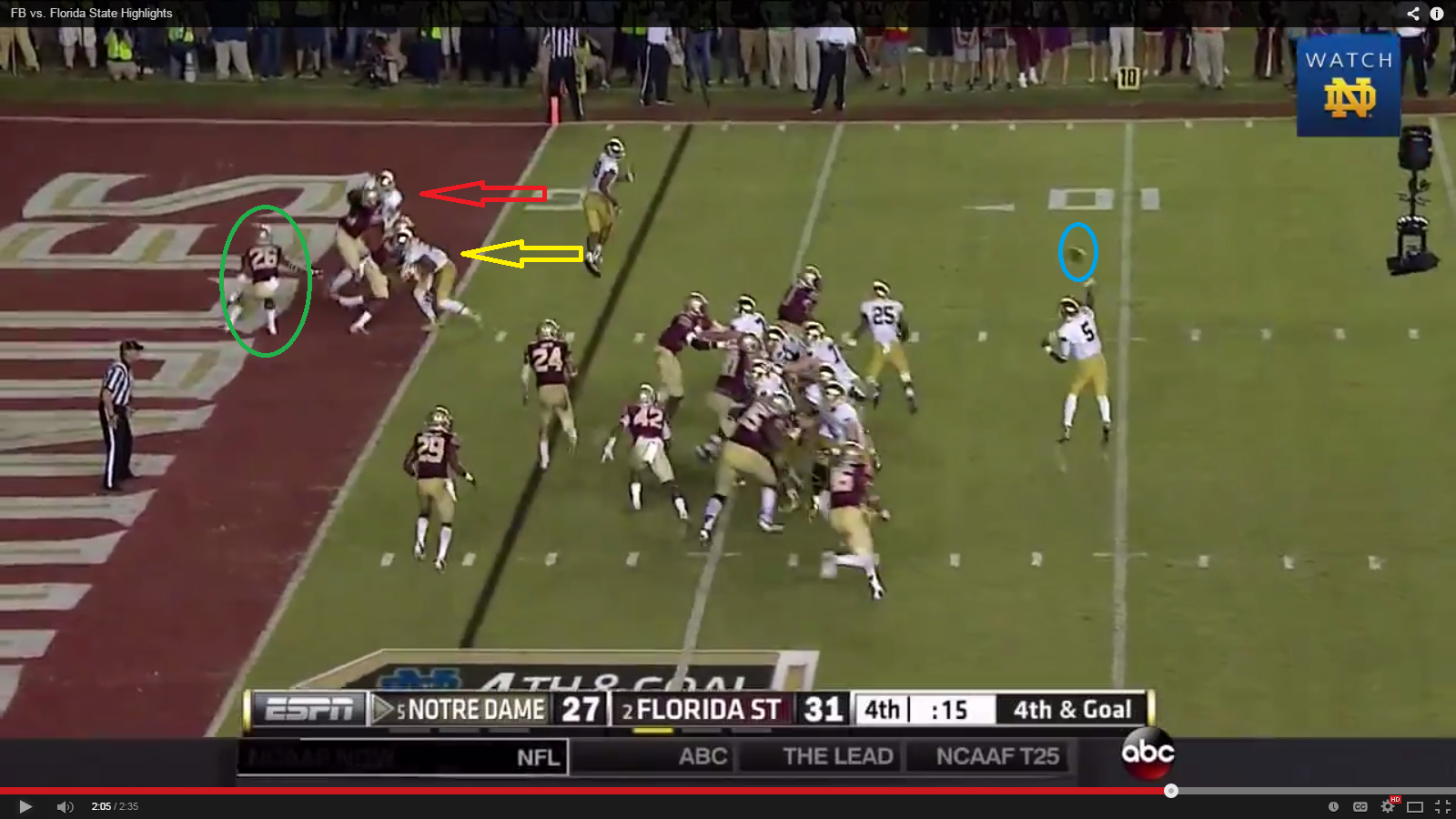 The ball has just left Everett Golson's hand (blue circle). Will Fuller (# 7, red arrow) and CJ Prosise (# 20, yellow arrow) are both engaged with their respective defenders. This is a problem for Notre Dame. When the ball is in the air, the Notre Dame receivers can't be engaged with the DB's (regardless of who initiated the contact) or at the very least must be working to get away from contact. At the crucial moment they don't appear to be disengaging. That's why the call was made.

I don't know if it was the right call or not from a rule book perspective. From an X's and O's perspective, what Fuller and Prosise did isn't critical. They weren't the focal point of this play. They were at best a third and fourth option. Their patterns were primarily designed to isolate Robinson's route. Even if Fuller and Prosise don't touch the defenders, FSU is in trouble on this play. Notre Dame has them flanked because of alignment, not because of contact. Oddly enough, this is being called a pick play, but the player responsible for covering Robinson (green circle)  was never touched by anyone.

No matter what you believe about the final call, this was a tough way to lose for the Irish. It was also a great win for FSU, and an immensely entertaining game.