This week's Five Wide column features a sneak peak at Brian Kelly's Stanford week prep notes, captured via camera phone by a One Foot Down mole who has infiltrated the Gug.

Share All sharing options for: Five Wide: The Investigative Edition

One Foot Down's investigative arm has captured photographic evidence of Brian Kelly's personal Stanford week preparation notes.  Interestingly, Kelly's preparation focuses on 5 areas, such that they fit perfectly into our weekly Five Wide column format.  Specifically, Kelly appears somewhat conflicted on how he expects the Irish to fare on the ground this weekend: 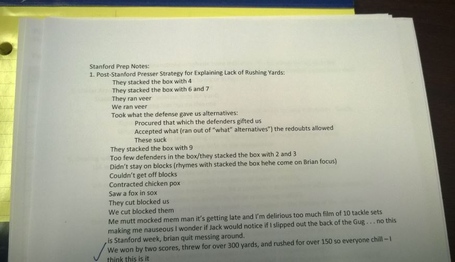 Kelly is also apparently strategizing on how to continue providing non-informative updates on the status of the Frozen Five: 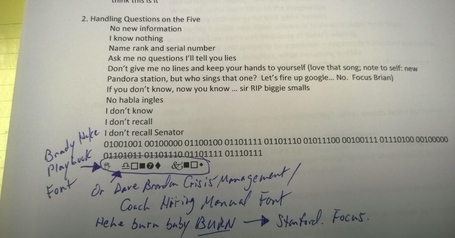 Kelly's thoughts then strayed from the specifically gridiron related to issues of a more sartorial bent: 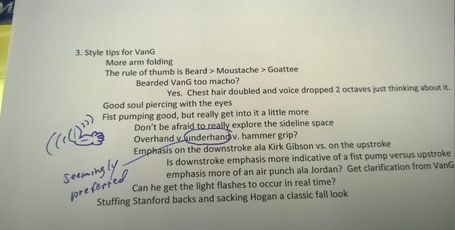 Finally, ever one for attention to detail, Kelly appears to be planning out this weekend's every detail, right down to the post game handshake and stadium atmosphere issues: