If I had the opportunity to interview Irish defensive coordinator Brian VanGorder, my first question would be... are you a wizard?

Admittedly, the clues aren't obvious. As far as I can tell, VanGorder doesn't wear a robe on a regular basis (at least in public). He doesn't carry a staff. Nor does he have a long white beard. Appearances can be deceiving though.

VanGorder certainly has worked magic with the Notre Dame defense this year. He's taken a group of inexperienced players (missing 4 key contributors due to injury and suspension) and turned them into what appears to be a dominant defense. His sleight of hand defensive schemes have rendered quarterbacks confused and opposing coaches frustrated (or reduced to oblivious, headsetless cheerleaders, who seem to be only peripherally aware of what is happening to them, but somehow manage to smile and clap as they are getting beat like a gong on national TV).

Let's take a look at some film from the Syracuse game for a great example of coach VanGorder's wizardry. 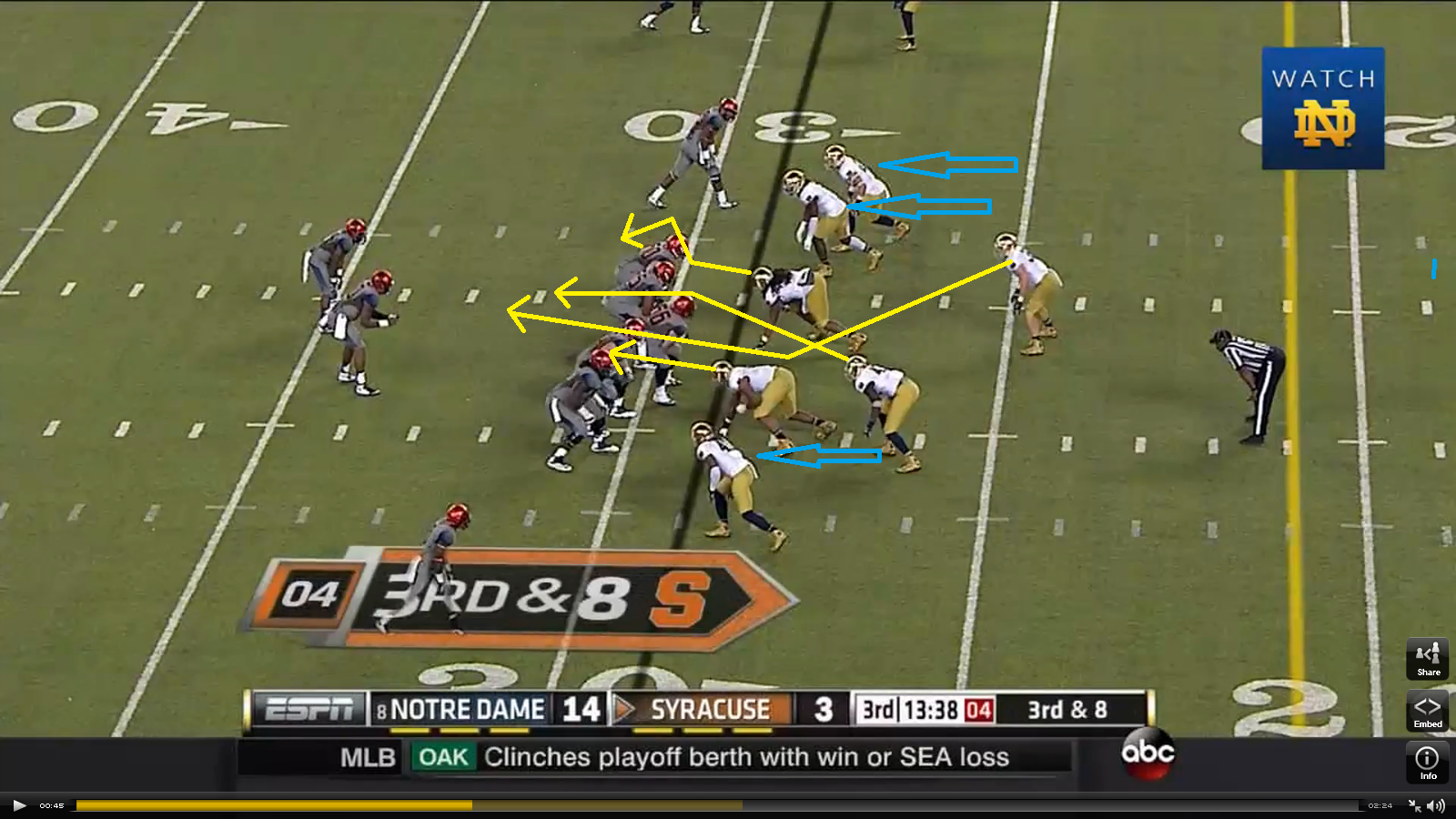 3rd & 8. The wizard is in his comfort zone. Pre-snap it's almost impossible to tell for certain who is going to rush the quarterback. In the end Notre Dame will rush 4 (yellow arrows). The remaining 3 will drop into coverage (blue arrows). 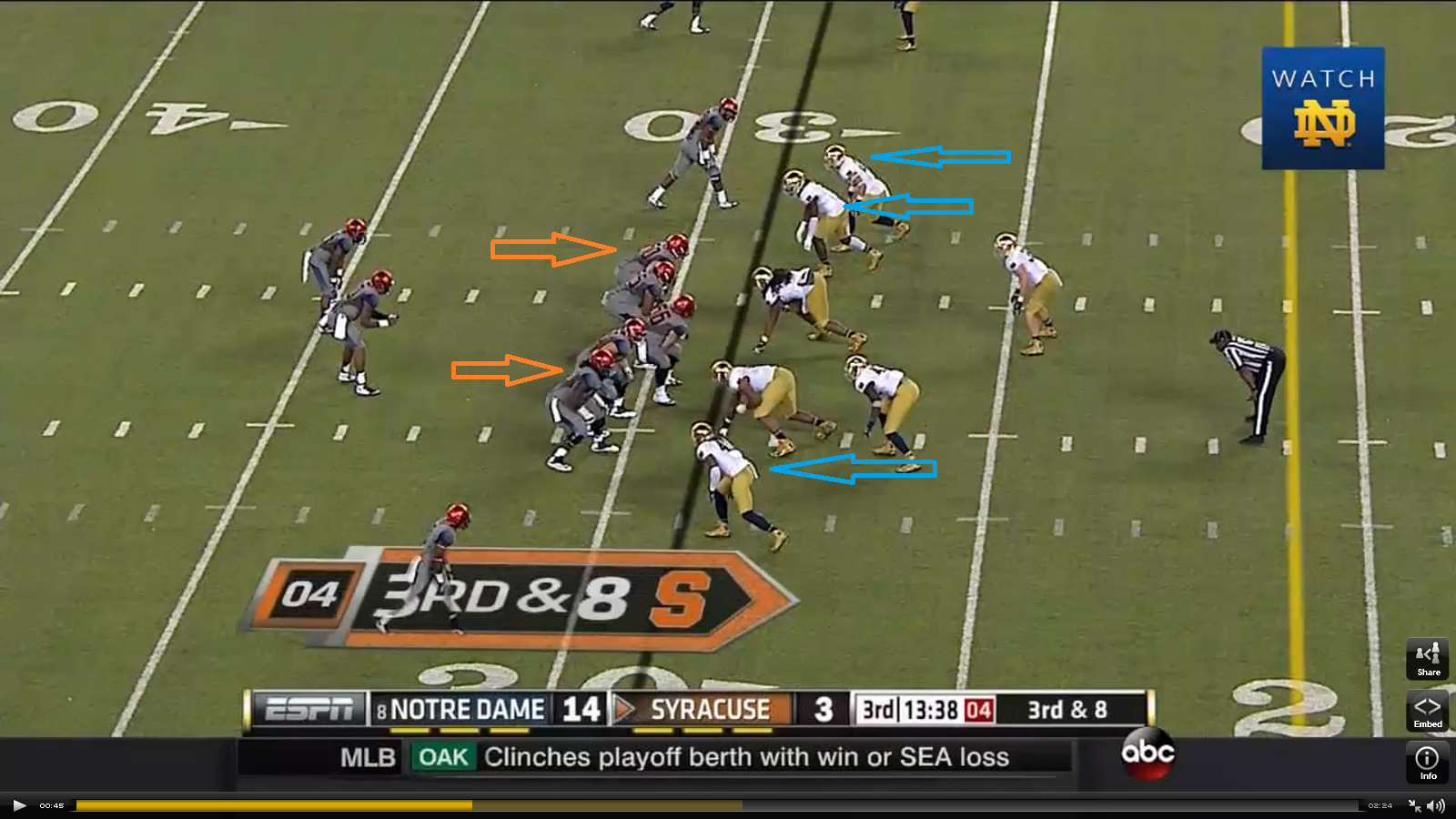 This alignment is especially difficult for the offensive tackles (orange arrows). The edge defenders could blitz or they could drop. At this point, based on body language it appears pressure is coming from the outside. 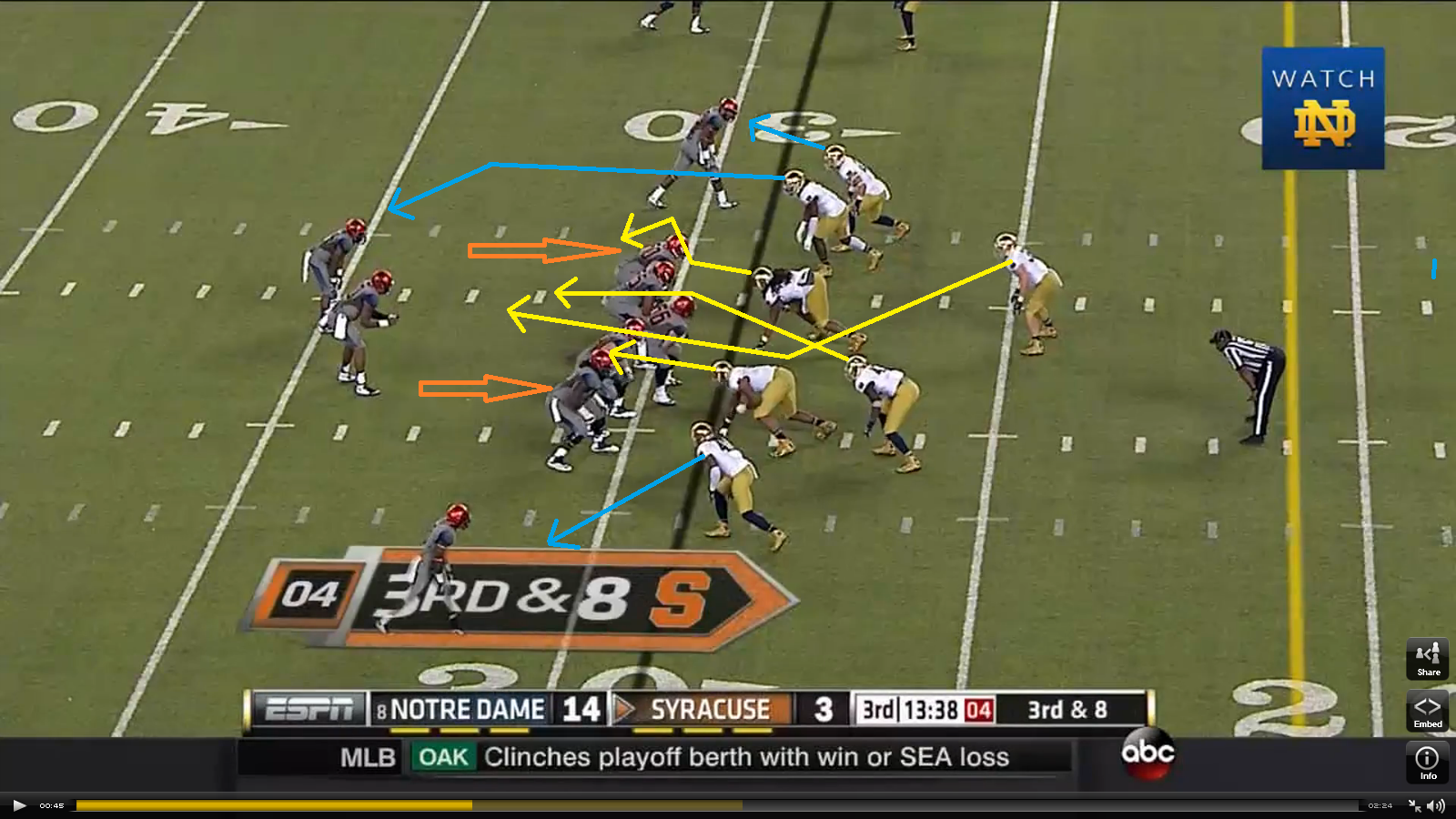 Bzzzz... wrong answer. The perimeter players don't blitz instead they play man coverage (blue arrows). The pressure will come from the inside (yellow arrows). This will leave the offensive tackles (orange arrows) in no man's land waiting for a blitz that never comes. 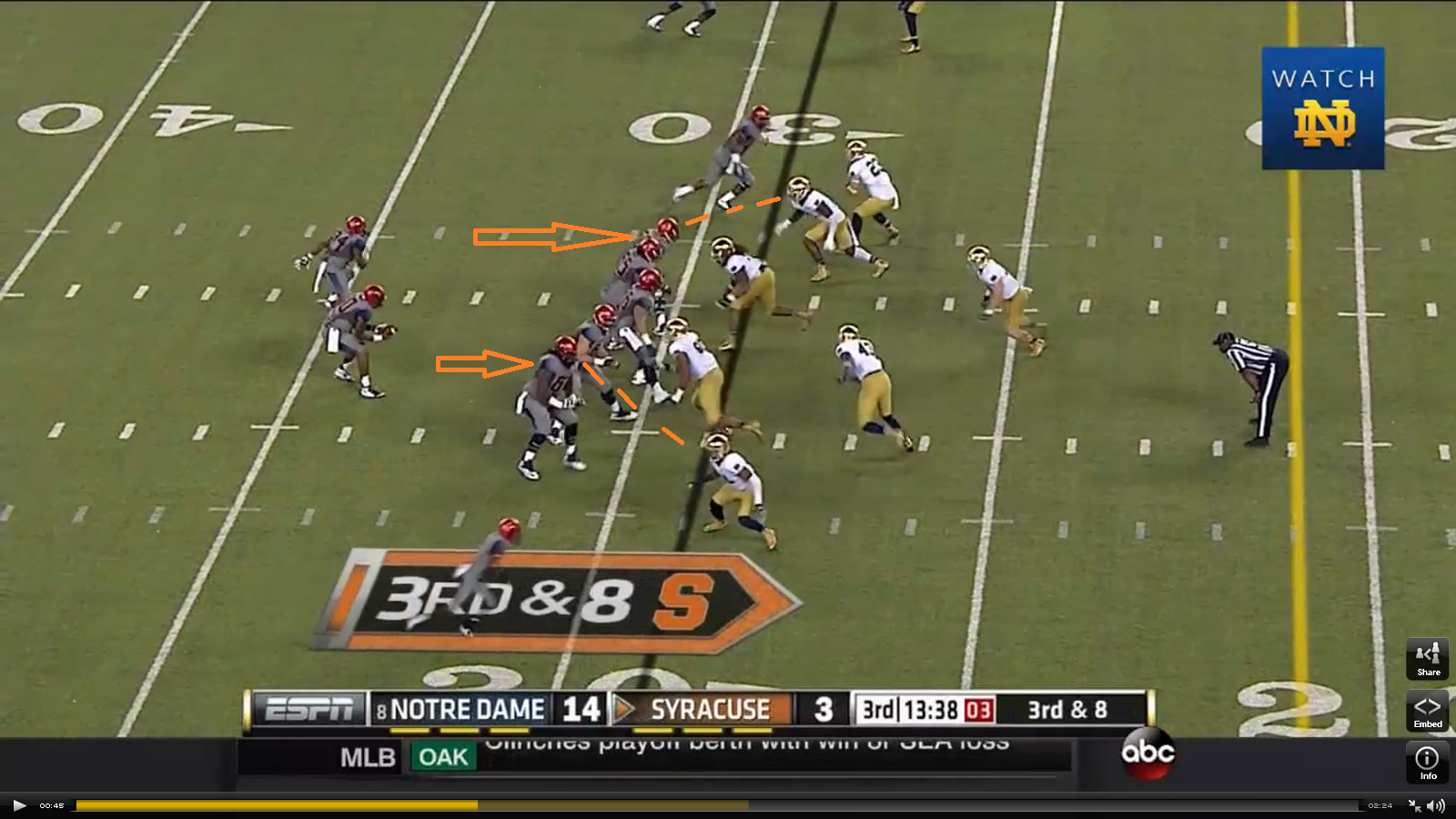 A fraction of a second after the snap. Both offensive tackles (orange arrows) focus on the edge rushers (orange dotted lines), and are unaware that their help is needed inside. 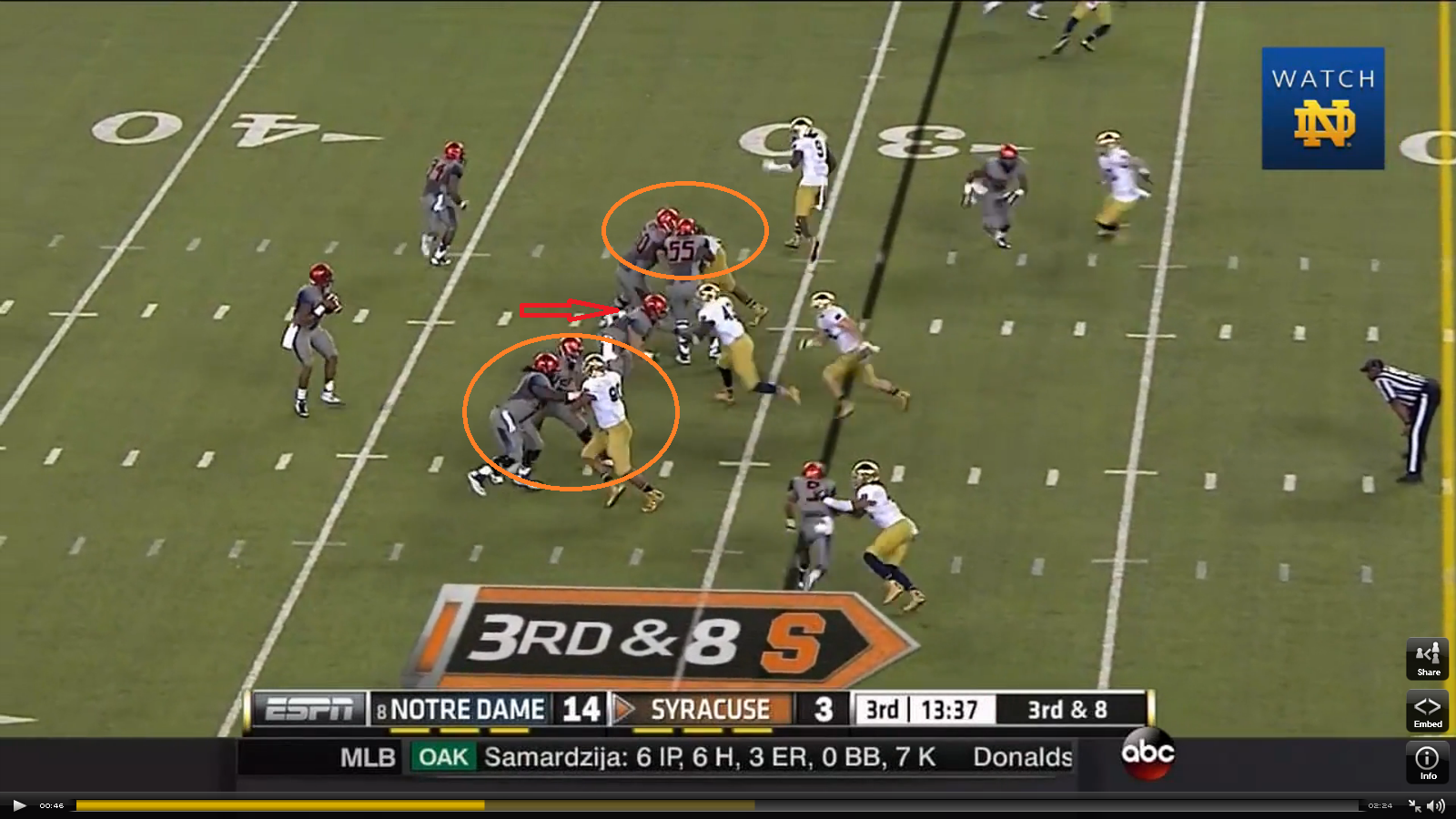 The tackles realize that the blitz isn't coming from the outside and try to help inside. Too late. Because they are late, they end up out of position occupying the same space (and defenders) as the guards (orange circles). This leaves the center all alone (red arrow), against two blitzing linebackers.

As an aside did you notice that one of the "blitzing inside linebackers" is actually freshmen defensive end Kolin Hill (# 43)? Wizardry, I tell you, pure wizardry. 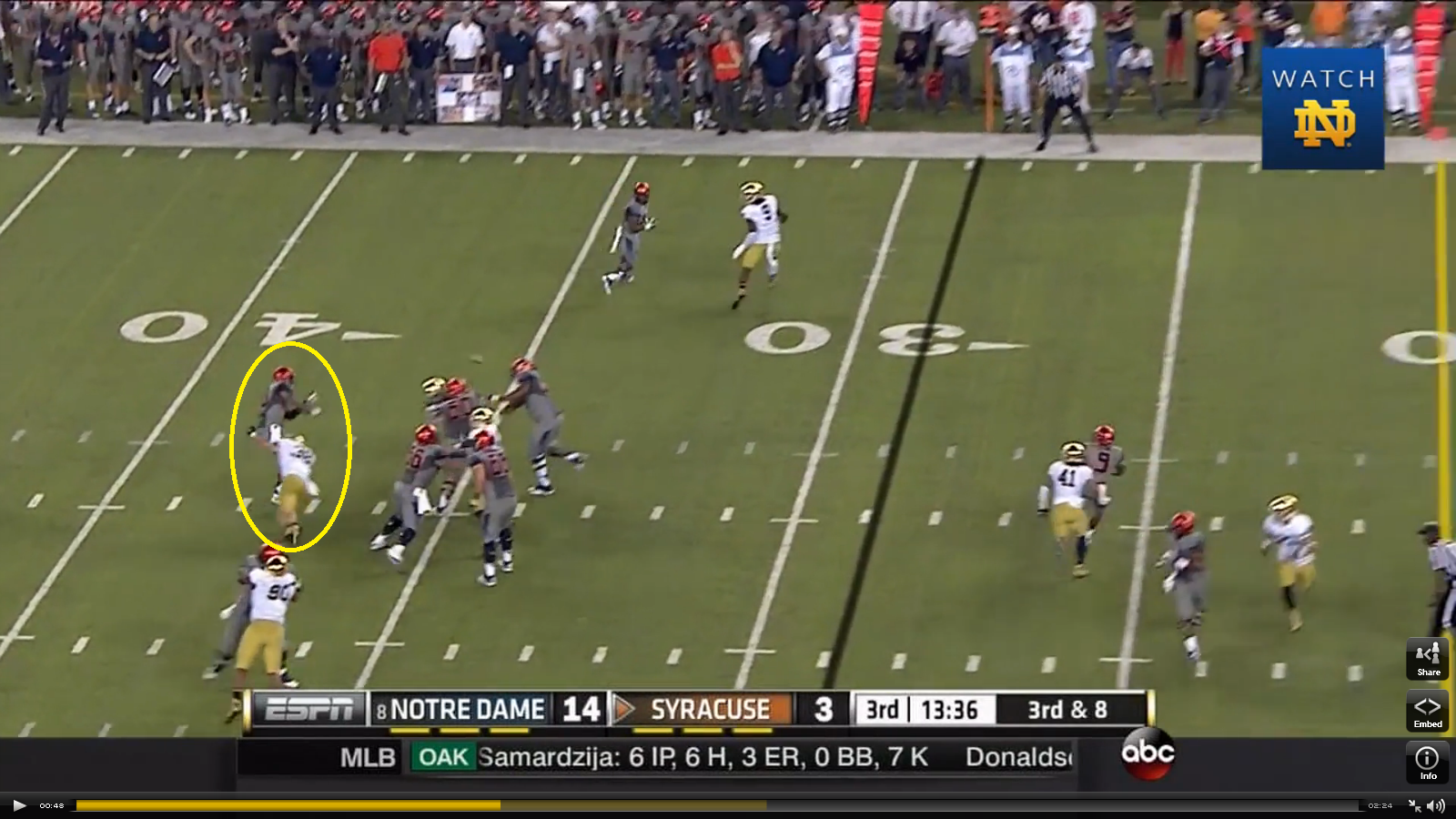 Joe Schmidt (# 38) breaks through and disrupts the throw (yellow circle). 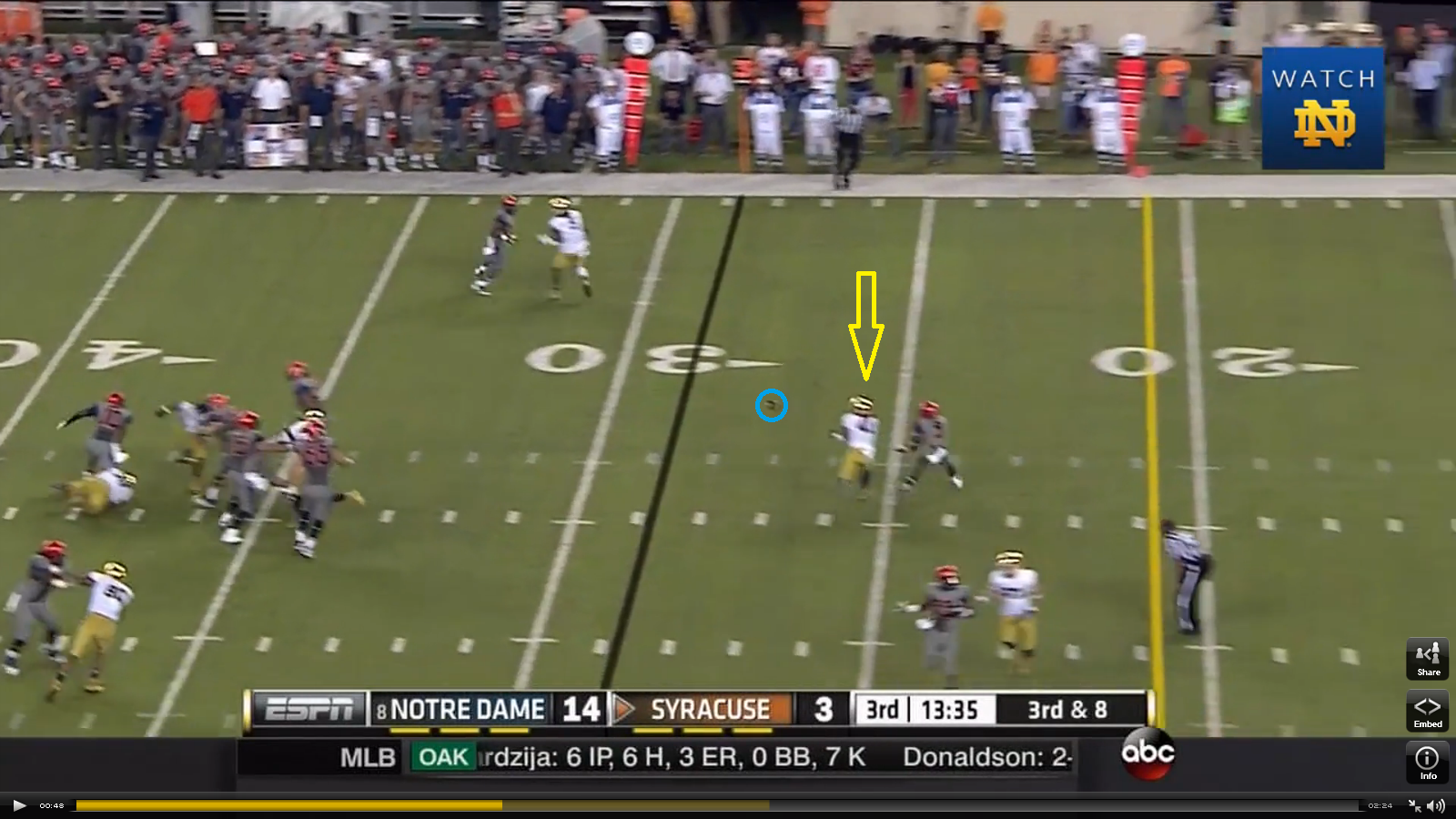 This is fabulous play design and excellent execution. Syracuse had no idea who was blitzing pre-snap. It looks like pressure is coming off the edge. Instead it comes from the middle. This causes confusion. Which disrupts the throw. Which leads to an interception.

It's nice to have a wizard on our side.