As South Bend plows through a deep freeze, the third zany round of the TSW Playoffs marches on.

Share All sharing options for: 2013 TSW Playoffs: The Elite Eight

Unless you reside in California, Florida, or some other unnaturally tropical place, odds are you've encountered a bit of nippy weather this week. And by "nippy", I mean the kind of weather where you step outside to grab the paper, and 34,000 years later you're getting chiseled out of an ice block by scientists who are extremely puzzled by your rolled-up document and its tales of the mysterious "Bee-see-ess", "Aw-bern", and "Jim-bo".

But these sissy temperatures had no effect on the eight Trick Shot Wednesday entries that advanced to the third round of what has been a tumultuous tournament. Behold, the Elite Eight! [Matchup votes in parentheses.] 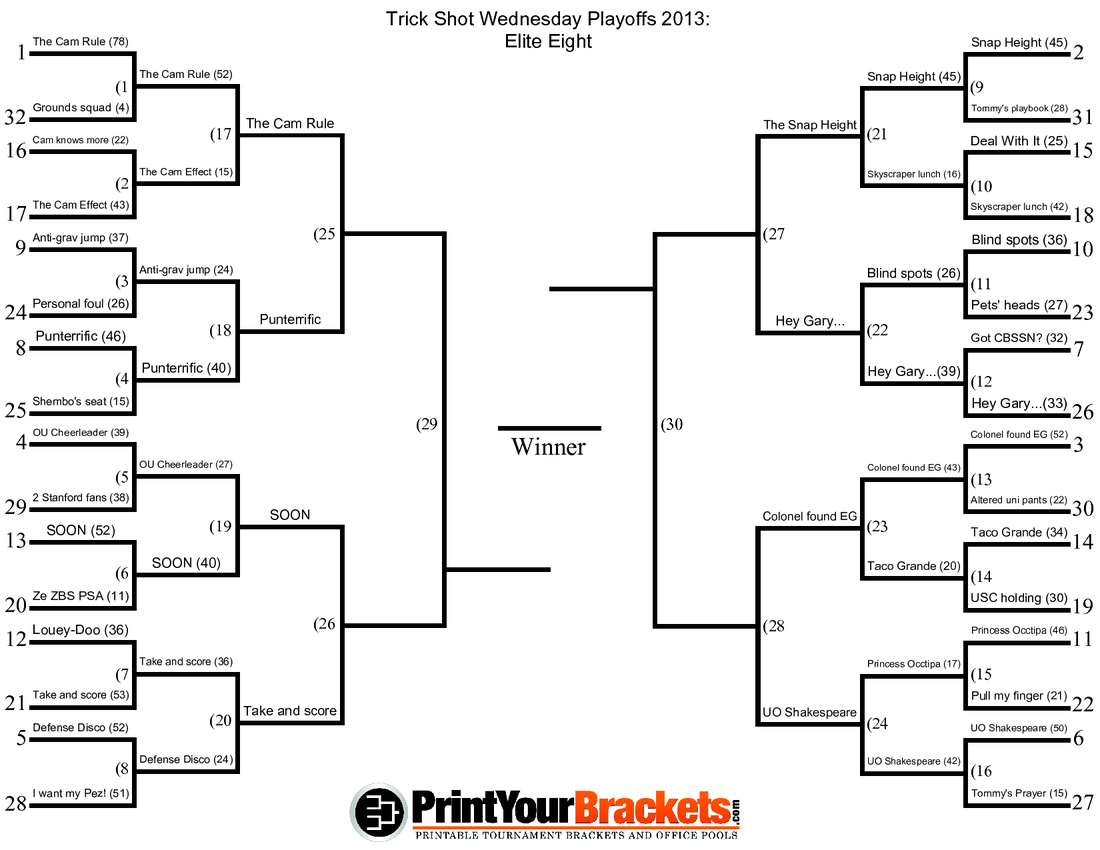 Click here to view the entire 2013 TSW Playoff Hub, or scroll down to view each individual matchup.

In two of our regions, the higher seeds took care of business and set up what amounts to a #1 vs. #2 matchup for their respective regions: (1) The Cam Rule vs. (8) Punterrific, and (3) Colonel found EG vs. (6) Oregonian Shakespeare. However, this was not the case for the other favorites. The championship hopes of (4) Horrified Cheerleader and (5) Defense Disco came crashing down as they were shocked by (13) SOON and (21) Take and score, respectively. And while (2) The Snap Height barely broke a sweat in its win, (26) Hey Gary... continued its stunning tournament run by downing (10) Blind spots.

As tensions surge and matchups intensify, your vote becomes more and more vital in deciding whether an entry will advance to the Final Four...or whether it will become a mere speed bump for those who do. Spread the word and vote in all four tilts before noon on Tuesday, January 14th! Your TSW Elite Eight matchups are as follows: