An OFD Preview of the Final BCS National Championship Game

Share All sharing options for: An OFD Preview of the Final BCS National Championship Game 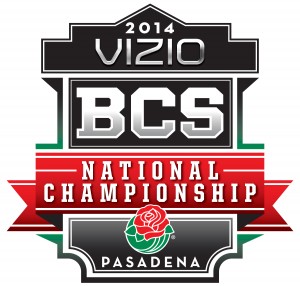 The Rose Bowl in Pasadena, California

Well, here we are at the finish line with the end of the 2013 college football season.

First I'd just like to say goodbye and farewell to the BCS system. Good riddance. May we never use the term "BCS" ever again except in proper historical context.

Seriously, don't use it. It doesn't make any sense with the 4-team playoff coming next season. We shall have the playoff (with the semi-finals stupidly being played on a rotating basis among the 6 anointed bowl sites but hopefully they ditch this sooner rather than later), and there will be major bowls and plain old regular bowls. Just like the old days.

Okay with that out of the way let's look at tonight's title bout.

Florida State is a fairly large favorite as far as national title games go and the 'Noles have looked like a team that should win this game. They've run roughshod over their entire schedule, have the Heisman winner, and are loaded with soon-to-be NFL Draft picks.

Does Auburn have a chance?

Why You Should Like Auburn: Their Running Game is Insane

FSU has the talent to stop slow down Auburn's rushing attack but it won't be easy. The Seminoles have been preaching staying patient, doing their jobs, and not trying to go for a big play, lest they get burned by the Tigers intricate and confusing offense. That's probably the smart move. Still, this could zap FSU of their swagger on defense. What's more, Auburn's offense is built in such a way that it can both kill you with big plays and quickly knife you over and over with 4 and 5-yard runs.

Let's be honest, if Auburn is winning this game it'll be because their offense completely frustrates Florida State and puts on another epic performance. The Tigers have run for 4,364 yards at 6.46 yards per carry. Just think about that. The 'Noles have their hands full.

Why You Should Like FSU: They've Been on a Death March

Obviously, the Seminoles are undefeated. They've won 12 of 13 games by 27 points or more, 10 of 13 games by 30 points or more, and 6 games by 40 points or more. They need to score just 28 points against Auburn to become the highest scoring team in college football history. The 'Noles are +550 in point differential. They are averaging 7.81 yards per play on offense and only surrendering 3.95 YPP on defense. This is what a death march looks like.

Why You Should Like Auburn: They Are More Tested

Sure, I'm pulling the SEC card here. But this has more to do with Florida State's weak schedule than anything else. The 'Noles have played 4 teams in the F/+ Top 50: Clemson (15), Miami (29), Duke (36), and Florida (46). You don't have to say much when a 9-4 Miami team that folded against every good opponent it played is your second toughest game on the season. Or if the worst Florida team in ages is your fourth toughest game. FSU has played 2 ranked teams according to the current AP Poll, and if that was updated over the weekend it would be just 1 team. Auburn, on the other hand, has played 5 ranked teams including 3 straight to get to the title game.

Florida State is 1st nationally in scoring defense, 13th nationally in rush defense, 1st in pass defense, 3rd in overall defense, 28th in sacks, 18th in tackles for loss, and 3rd in turnovers forced. Yes, their schedule hasn't been tough but they are still 5th in FEI defense and 1st in S&P defense.

Auburn's defense is just okay. Some of their traditional stats are ugly (64th rush defense, 102nd pass defense, 89th total defense) but they are 15th in FEI defense and 32nd in S&P defense. Nevertheless, they appear out-matched on this side of the ball in comparison to Florida State.

Why You Should Like Auburn: The Gus Malzahn Factor

Malzahn is some sort of sorcerer calling plays and his offense is a treat to watch with its motion, pace, and precision in combination with its brutality.

I don't know if I would say that Malzahn is a better coach than Jimbo Fisher but I'd probably take Gus in one-game because of his play-calling capabilities. Plus, there's something about Malzahn. This guy has been incredibly successful and nearly everything he's touched since the mid-1990's has turned to gold.

Why You Should Like FSU: Talent Level + Balance on Offense

Auburn has recruited very well going back to 2009 during the early part of the Gene Chizik era. It's partly why the team has been able to bounce back from 3-9 last year to the national title game this year.

Florida State still has more talent, especially seasoned college talent. The 'Noles recruiting classes over the past five years have averaged 7th nationally while Auburn is at 12th. Not a huge difference but a decent enough of one to give a team an edge in a game like this.

Ultimately I'll take Florida State in this game because they have more balance on offense and have the biggest X-factor in the game with Jameis Winston. Not that Marshall and Mason are bums, mind you, they've combined for 2,644 rushing yards and 33 rushing touchdowns.

I just don't know that if Auburn gets down by 14 or 17 points, if their defense really is struggling, that Marshall is going to be able to make 8 to 10 clutch passes on the biggest stage. The Tigers' run game is really, really awesome and maybe they stay on fire and eat a ton of clock to win this one. But in a title game I like Florida State's ability to run and pass with consistent success.

Auburn's rags to riches story would be amazing but I'll take the team that has been showing more signs of dominance for an entire season and is still undefeated.