In one of the worst home losses in the Mike Brey era, the Irish were "beat down" by the Virginia Cavaliers Tuesday night.

I spent a good portion of Monday night and Tuesday morning pouring over statistics.  Like a wannabe coach stuck in a frustrated fan's body, I had the fantasy of finding that one statistical nugget, the one small thing Notre Dame could do to turn its fate around and start living up to our lofty expectations of their first year in the ACC.  Tuesday night, however, didn't require any advanced quantitative measures to explain Notre Dame's struggles when the qualitative cause was so plain to see.  The Irish were out hustled and out coached by a superior Virginia team.

In his post game comments, Irish head coach, Mike Brey, called Virginia, "The most confident team in the league," and conceded, "They beat us down."

Brey added that his team had their spirit broken by Virginia's superior defensive effort and execution. It was a performance that caused The Observer's Andrew Gastelum to ask if the Irish home swagger had gone the way of the Mike Brey mock-turtleneck.

Sitting under the watchful eyes of ESPN U's Bobby Knight and former head coach Digger Phelps, the Irish turned in a lifeless, sloppy, and uninspired effort.

Both commentators often remarked how the game was getting "ugly" and, frankly, seemed hopeful the Irish would do something to get back in it to give them something interesting to talk about. As it stood, there wasn't much "analysis" needed. If you turn the ball over 13 times in a half and 20 times for the game against a well-coached team, you're going to lose.

Tony Bennett put together a masterful game plan for Virginia, who is now off to their best ACC start since 1983.  The Cavalier's decided they weren't going to let Notre Dame's Garrick Sherman beat them on the block.  Anytime the Notre Dame senior caught the ball below the free throw line, Virginia doubled him on the catch.  At first, I thought this would bode well for Notre Dame.  As fans, we've grown accustomed to sharp cutting and precise passing Notre Dame teams -not this one.  The Irish suffered a quick rash of 9 turnovers and found themselves down 20 with 5 minutes left in the first half.

Demetrius Jackson provided a spark that ignited a 9-0 run to finish the first half.  The talented Freshman used his superior quickness on both ends of the floor to help cut the Cavalier lead to 10 at the half.  You couldn't blame Irish fans for taking some optimism into the halftime break.  Despite losing his starting spot, Jackson was finally showing the assertiveness Irish faithful had been longing for.  Perhaps the Irish could regain some of that home magic in Purcell Pavillion and warm up the frozen faithful.

Unfortunately, those hopes were quickly dashed by Virginia opening up the second half with a 8-0 run.  Senior, Eric Atkins got caught in a high screen to give Virginia an open look at a 3.  After a missed 3 by Atkins on the other end, he was beat badly on a back-cut for another Virginia basket. Two turnovers and a missed 3 later, and Mike Brey had burned his 4th time out of the evening at the 16:34 mark of the 2nd half.  It was officially over.

Shorthanded for the 2nd straight game, Notre Dame looked tired and uninspired Tuesday evening.  Austin Burgett was in street clothes as the medical staff seeks to understand the cardiac irregularity he suffered last week.  It seemed like the Irish started on their heels and Tony Bennett's team came out ready to play.  Virginia was incredibly well coached and their suffocating defense led to several 6 minute scoring droughts for Notre Dame.  If you want to see a clinic on how to move and rotate defensively, watch Tony Bennett's squad.  If Virginia can maintain this standard of play as they reach the meatier part of their ACC schedule, Bennett will be the lead contender for ACC Coach of the Year.

For the guys in gold, it was more of the same.  This Notre Dame team seems to defend better when they see the ball going through the hoop.  That's how you end up with disappointing seasons like this one.  Using offense to generate defense is a recipe for losing basketball, and it seems that's how this team is wired.  They're just too passive on defense. Rarely do you see guys down in a defensive stance, and they're very slow to move their feet.  No play demonstrated that better than the one pictured below. 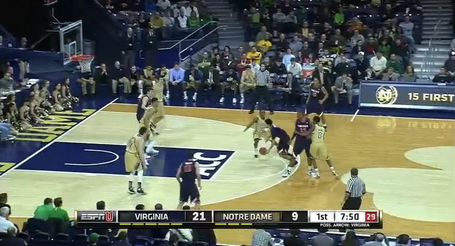 After an ND miss, Virginia pushed the ball up the floor, and as the Irish were attempting to set their 2-3, point guard London Perrantes uses a slight rub to easily lose Atkins and split the top of the 2-3.  Look at how flat footed the back 3 of the zone are standing.  Jackson is too late to get in front of Perrantes; as Auguste is forced to step up late, it was an easy little bounce pass to Mike Tobey for the dunk.

The rest of the night was more of the same.  You don't really need statistics to quantify how poorly Notre Dame played, but let's look at them anyway...

You just can't play this way and hope to be successful.  Another night with a squad shooting 8 percentage points better and turning the ball over on 12 percent fewer of their possessions isn't going to get it done.  Ever.  In the last four games, Notre Dame's opponents have shot +12, +13, +5 and +8 percentage points better than their conference eFG% average.  Playing Notre Dame seems to be a great way to get your offensive efficiency back on track.

We can also do a patent-pending 4pointshooter GPA analysis of this game:

Notre Dame got exactly 21 points from their "big 3" on 41% eFG, and these veteran leaders committed 11 turnovers.  Pat Connaughton has logged 112 minutes in his last 3 games and is now a combined 10-35 from the field in those contests. You have to wonder if the junior swingman's legs are starting to go.

On a night to forget, there were 2 things to take away.  One, Demetrius Jackson decided to try to take a game over and sparked a 9-0 run against a top team when he did it.  More of this please.  Two, Zach Auguste responded well to getting the start and showed aggression and athleticism on the offensive end.  He needs to find a consistent defensive effort to be truly effective, but this was certainly one of the sophomore big man's better performances.

We'll leave you with the vocal stylings of "Screamin'" Jack Nolan, and look forward to your thoughts in the comments.