Share All sharing options for: Five Wide Fullbacks: The Time for Change Edition

1. NFL Commissioner Roger Goodell recently stated that the league might abolish the current point after touchdown system in favor of something different. Give me one rule change to a handful of sports that you would implement if given the opportunity.

NFL- Clock Stops After 1st Down

Admittedly not an interesting game changer but I like the college system better. There is so much time wasted in the pro game in between snaps even as teams are embracing the hurry-up offense. For what it's worth I really like the idea to change the PAT in the NFL.

Yes, the college game needs something from the NFL and vice versa. There are a couple rules outside of the game (banning FCS opponents, for one) that would be great moves but I'm tired of players slipping or falling down and the play being over. I think you have to make the defense make a tackle.

Why do we live in a world where this isn't a rule yet?

Goalies are just too good and we're never going back to the days when netminders we're 5'8" 175 pounds with gaping holes of twine on either side of their bodies. Making the ice larger is a pain and might not be worth the fuss. Scoring needs to go up. The league has been averaging about 2 players breaking the 100-point mark over the last 6 or 7 years. Heck, even the Sabres have been flirting with scoring the fewest goals in NHL history. This is not good.

If you could go into a laboratory and build the perfect evil referee that monster would come out looking and acting like Joe Crawford on the court. He needs to go.

Just trying to help your game out, baseball. I mean, do the big seasonal records (pitcher wins, home runs, RBI's) even matter anymore in this day and age? You'll still have your averages and abundance of advanced metrics to lean on. It's time to re-calibrate!

2. The NBC broadcast has changed quite a bit with Dan Hicks and Mike Mayock now calling Irish games. What other improvement can be made for the broadcast?

The games on NBC are always known to last a really long time. I'll tell you what I think the biggest issue is and it's Notre Dame's fault as much as anything.

This has become one of my pet-peeves when watching the Irish play at home. The NBC telecast starts, there's a brief introduction by the host and a short video intro. We'll get like a minute of discussion between the two announcers with some shots from warmups of the Kelly or the opposing coach then we head to commercial. Of course there's a nice long NBC Sports Report with Jimmy Roberts that just has to recap 6 different sports stories and then back to another commercial.

Meanwhile, the CBS or ABC game that started at 3:30 is half-way through the first quarter by the time the Notre Dame game kicks off. This is the primary culprit why the game Irish games are so long when watching on TV. They need to focus more on the actual football game about to be played and get to kickoff sooner.

3. The Sochi Olympics are coming up in a couple weeks. Is there anything you'd like to see the winter games do differently?

I know it would kill ratings but it's the Olympics the ratings are going to suck no matter what. That's why I think only amateurs should be used for the hockey tournament.

Sure you're not going to see the best players in the world but I'm old school. I grew up watching the next young stars playing for their country before they went on to shine in the NHL. Don't get me wrong I still enjoy having the professionals there. It's just too hard to separate these millionaires from their NHL clubs and the fact that some of them, deep down, are praying they don't get hurt.

I know Larz will agree with me on this but the World Junior championships always have an amazing buzz and edge to them. I'd love to be able to see that played out in the Olympics like it used to back in the day.

4. You can make one change to Notre Dame Stadium before the renovation process begins, what is it?

I would like music to be playing prior to the team coming out of the tunnel. That way this tradition can be bolstered when the video screens are put in and we're both accustomed to it and ready to fine-tune the presentation right out of the gate.

I've always though this blase of horns intro that you hear on some recordings of the Victory March:

...would work really well to shake the drowsy Notre Dame crowd out of its seats before the game.

5. Now that Under Armour is going to be outfitting the Irish on the football field what uniform change would you like to see made?

So Under Armour has made it clear that the football uniforms aren't going to be messed with beyond the usual tweaking that happens every couple years. That's a smart move on their part. Way to win over the fan base.

I need to ask a favor though...can we get some home and away long socks for the players to wear? 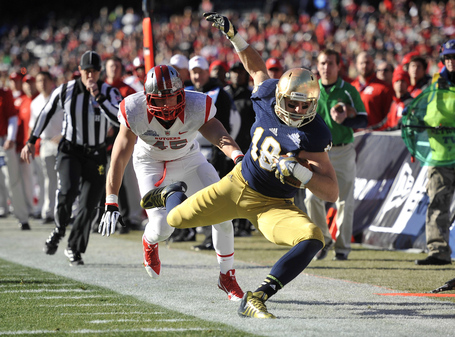 Adidas used to make long socks for the team but they pretty much fell out of favor during the Kelly era as the players started wearing tights.

Crew socks over Adidas Climawarm+ tights? That's like going out in public with running shorts over sweatpants.

Since Under Armour is best known for their cold (and hot) gear let's work on something that looks respectable for the football team. Let's put some pattern on the tights and make the players wear ankle socks that can't be seen above their cleats. You could even make a two-colored pro-style pair of tights as well.

Of course the players could just wear long socks over their tights which is what I'm assuming many NFL players do when it's cold out. Either way, if players want to wear something to cover their legs we've got it covered with Under Armour's new technology. You're welcome.