The Pinstripe bowl was in many ways a mirror image of the 2013 season. Sometimes the Irish looked very good, other times very average, and at times incompetent (I'm looking at you kickoff cover team). On a smaller scale the red zone offense followed this pattern--at times it looked pretty good and at times pretty bad. Irish fans were justifiably frustrated with the lack of red zone production against Rutgers. However, on the bright side, Notre Dame was able to score twice running the ball. On both occasions coach Brian Kelly did a nice job of deploying formations that created favourable match ups in the running game. Let's take a look at the film and I'll show you what I mean. 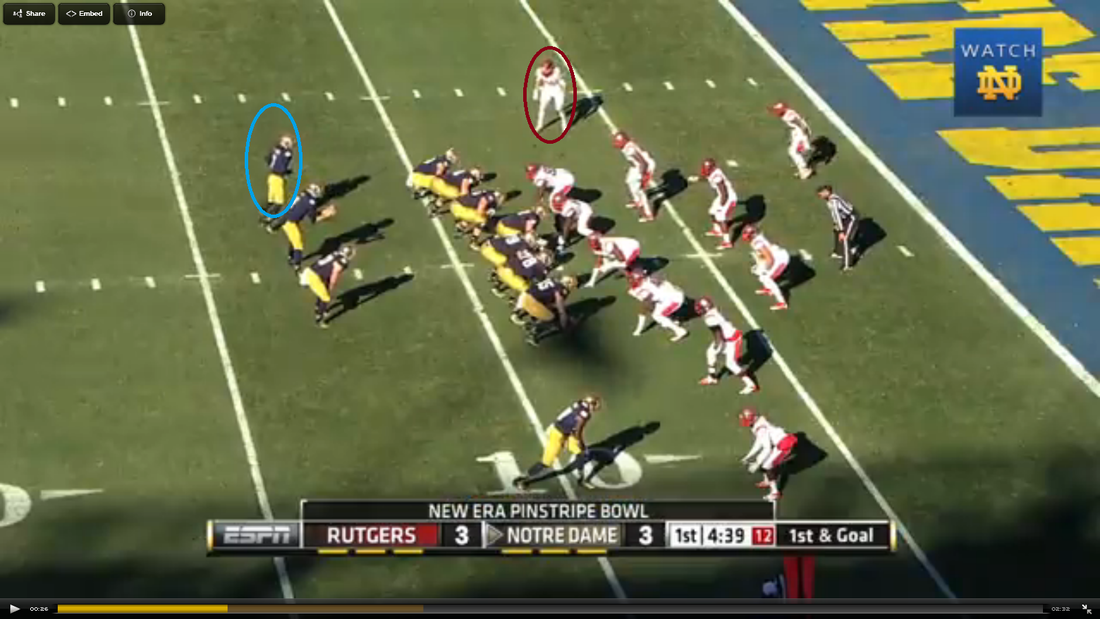 Notre Dame's first touchdown. Receiver TJ Jones (# 7, blue circle) has motioned into the backfield. The corner who is responsible for covering TJ (crimson circle) doesn't motion in. This subtle adjustment sets the play up for success. By moving TJ Jones into the backfield the Irish gain an extra player in the box, which means a better run look for Notre Dame. 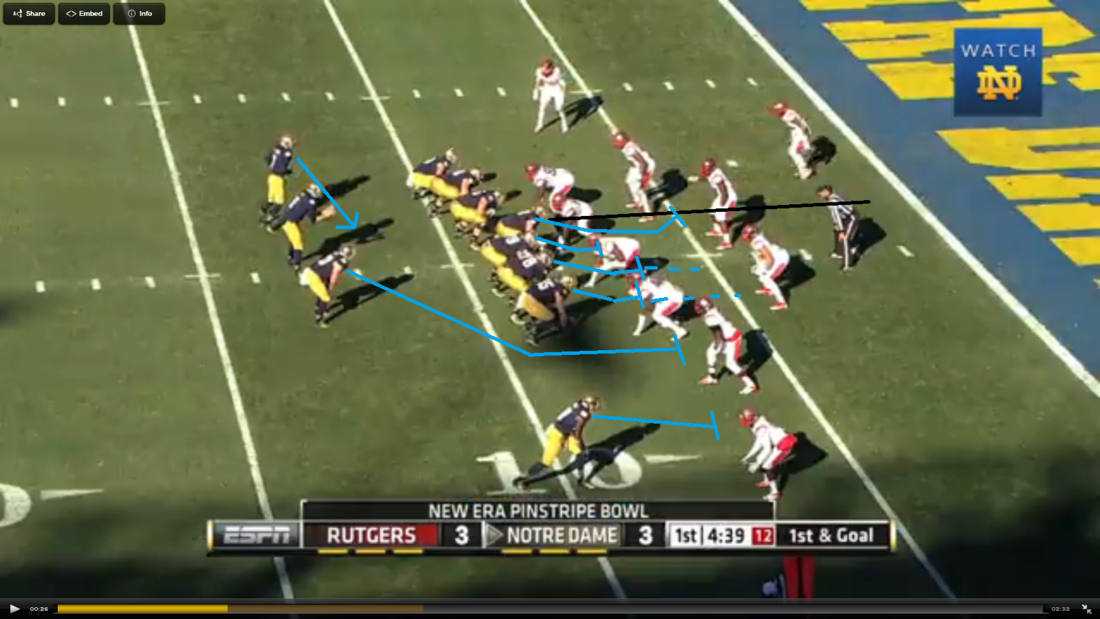 This formation is much closer to good old-fashioned man-ball than the brand of spread football that Brian Kelly is famous for. The Irish have two tight ends on the field and will even use a leader blocker on this play. Ye Gods man, has Brian Kelly gone insane? A spread coach using a power football formation, what sort of lunacy will be next? Football games being played in baseball stadiums? Artificial turf and jumbotrons popping up all over the Notre Dame campus, stripping the hallowed grounds of tradition like a plague of locusts? Clearly this formation was a facade, masking Coach Kelly's true identity as a pass happy, new-age, spread-football guru. Everyone knows you can't play man-ball with a receiver in at running back and a tailback playing fullback. Nice try BK, harrumph.

Sorry, I digress, let's get back to the play itself. The play will be going to the right of the black line. Notre Dame is going to run a sweep to TJ Jones. From a numbers perspective, it's a fair fight. Notre Dame has enough blockers on the play side to account for all the defenders. A point of clarification--right tackle Ronnie Stanley (#78) and tight end Troy Niklas (#85), will double-team the defensive end and one of them should work up to the outside linebacker as the play develops (in case you are wondering what the blue dotted lines mean). 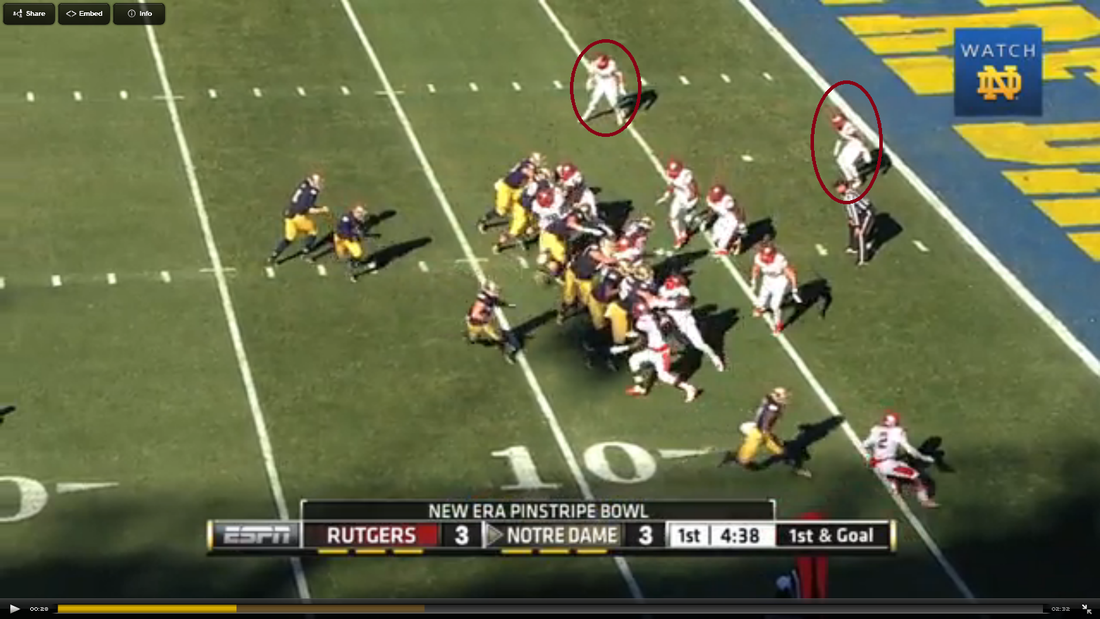 The two circled defenders stay home on the backside to play boot, counter, reverse. This ensures that Notre Dame maintains equal numbers on the play side. 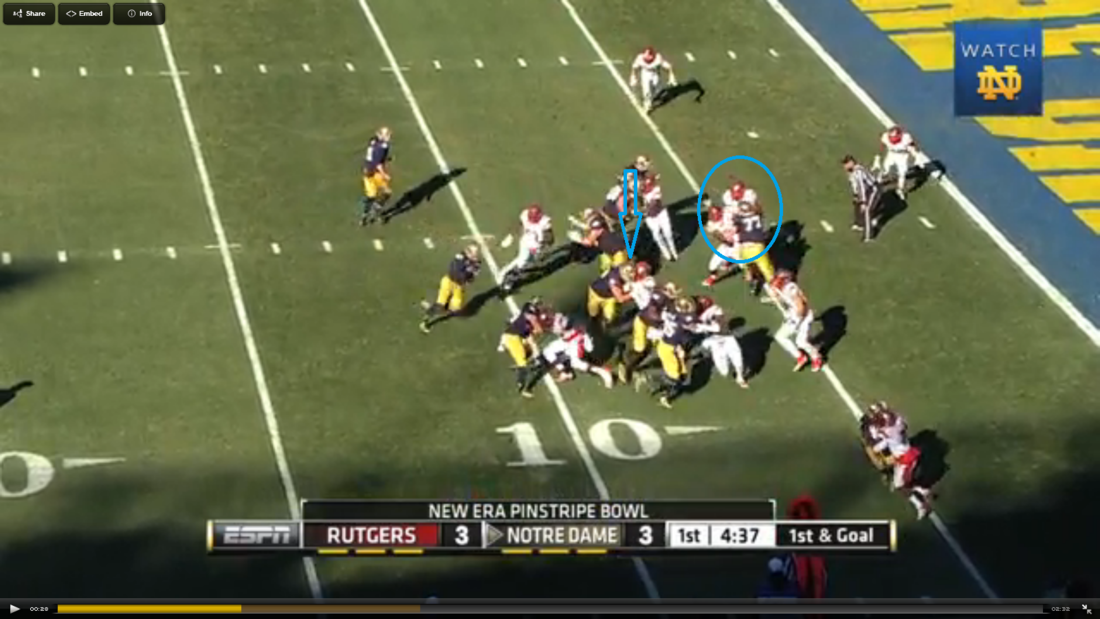 The formation set the Irish up for success. Now the players have to execute. Fortunately, the Notre Dame offensive line rises to the occasion. In particular, there are two critical blocks on this play. First, guard Steve Elmer (#79) widens out the defensive tackle (blue arrow). The second key block comes from center Matt Hegarty (#77, blue circle).  He takes out two players; the middle linebacker and the backside linebacker.

When you watch the video pay attention to the job that TJ Jones does. Tackle Ronnie Stanley is unable to get to the second level so the play side linebacker never gets blocked. TJ does a great job stretching the field horizontally with the sweep motion and then making a sharp cut up field. The end result is the unblocked outside linebacker overruns the play and can't make the tackle. 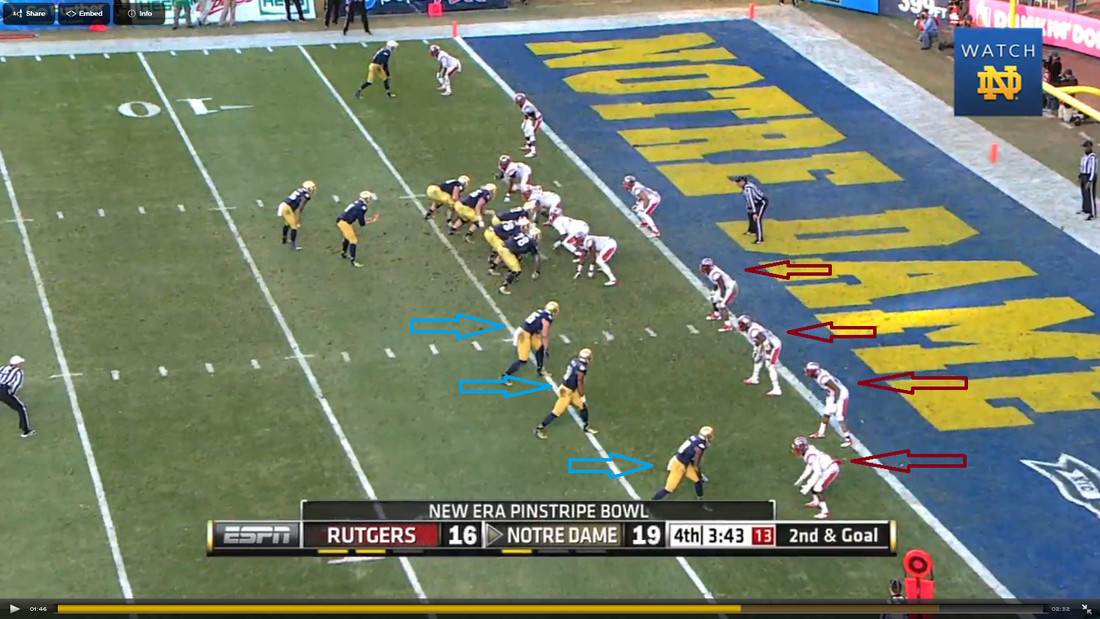 This time Brian Kelly is using a spread formation inside the 5 yard line. He has a single back and three receivers spread to the right (blue arrows). Based on formation most would assume this would be some sort of fade, slant, or other variation of the passing game that doesn't involve manly things like fullbacks hitting people, right?

Not so fast. There is a method to coach Kelly's madness. By spreading out the field the defense has to declare if they are favouring the pass or the run. In this example, Rutgers has 4 players (crimson arrows) committed to defending three receivers. You don't need an engineering degree from Notre Dame to do the math on this one. Four players covering three on the perimeter, means you run the ball inside. 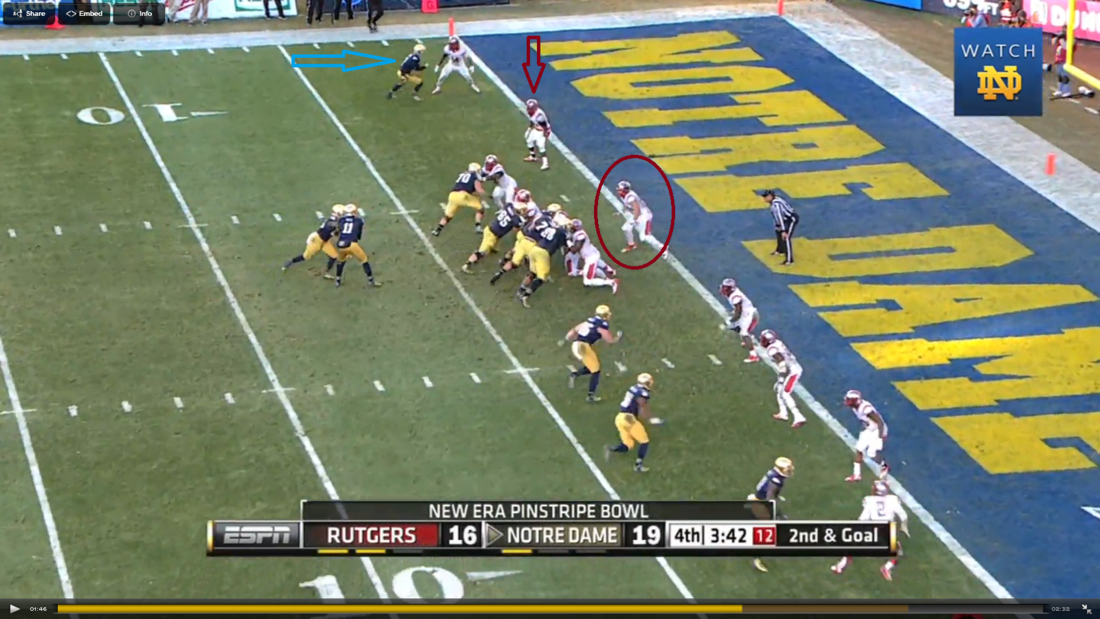 I believe this is a zone read play (although admittedly I can't be 100% certain). Tommy Rees (# 11) is reading the outside linebacker (red arrow). If he attacks the line of scrimmage, Tommy will throw the slant to TJ Jones (blue arrow). If he doesn't attack and takes away the slant, Tommy will give the ball to Tarean Folston (# 25). Rees makes the correct decision and hands the ball off. Once he gets the ball, Folston's first job is to neutralize the middle linebacker (crimson circle) by pulling him towards the line of scrimmage and making a cut at the last possible second. 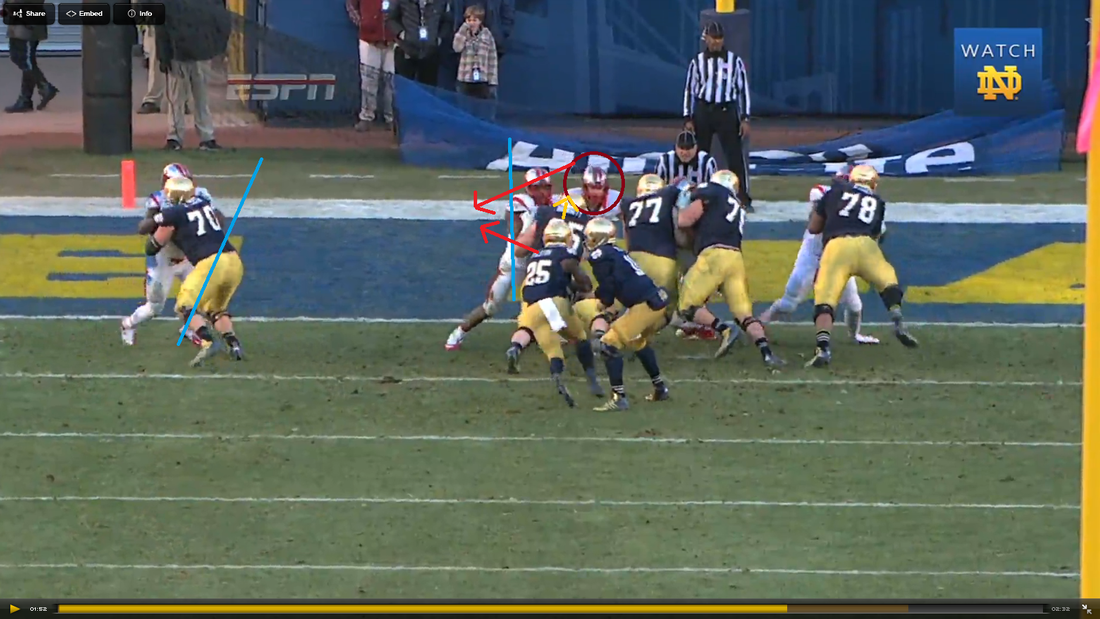 A great camera angle allows us to see what Folston is seeing. It's obvious where the hole is, Zack Martin (# 70) and Conor Hanratty (# 65) have opened up a sizable running lane a fraction of a second after the snap. As a running back, every instinct you have screams to follow the red arrow and head for the hole immediately. If there was a lead blocker that would be acceptable. However, because this is a zone blocking scheme with no lead blocker Folston must use a different technique. Instead he must be patient and follow the yellow arrow towards the line of scrimmage. This will force the circled linebacker to step up and fill. If Folston makes his cut to the hole too early, the linebacker simply follows his own red arrow, scrapes over the top and likely makes the tackle. 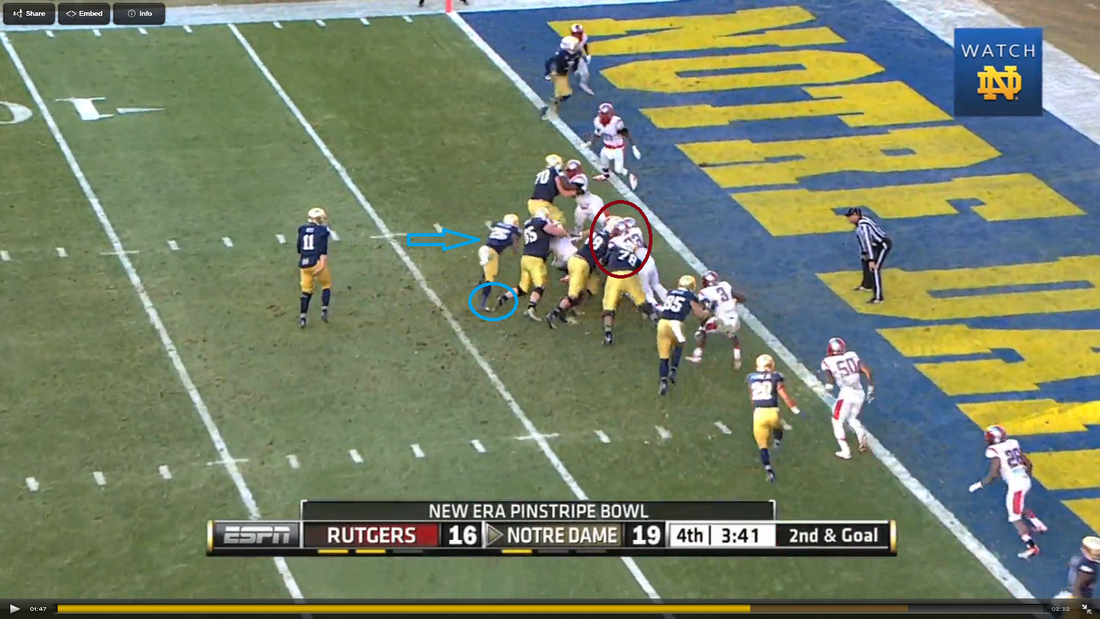 This is a great example of how to execute this type of zone running play. Running backs are taught to "step on the guard's heels" before making a cut. As you can see Folston couldn't have done it any better (blue circle). Waiting until the last possible second forced the middle linebacker to step up and fill the inside gap. When Folston made the cut, the middle linebacker couldn't get there because he got caught up in traffic (crimson circle). That's how you run in a zone blocking scheme.

Before we finish this play off I wanted to highlight Zack Martin. Check out the job the big man does on this play 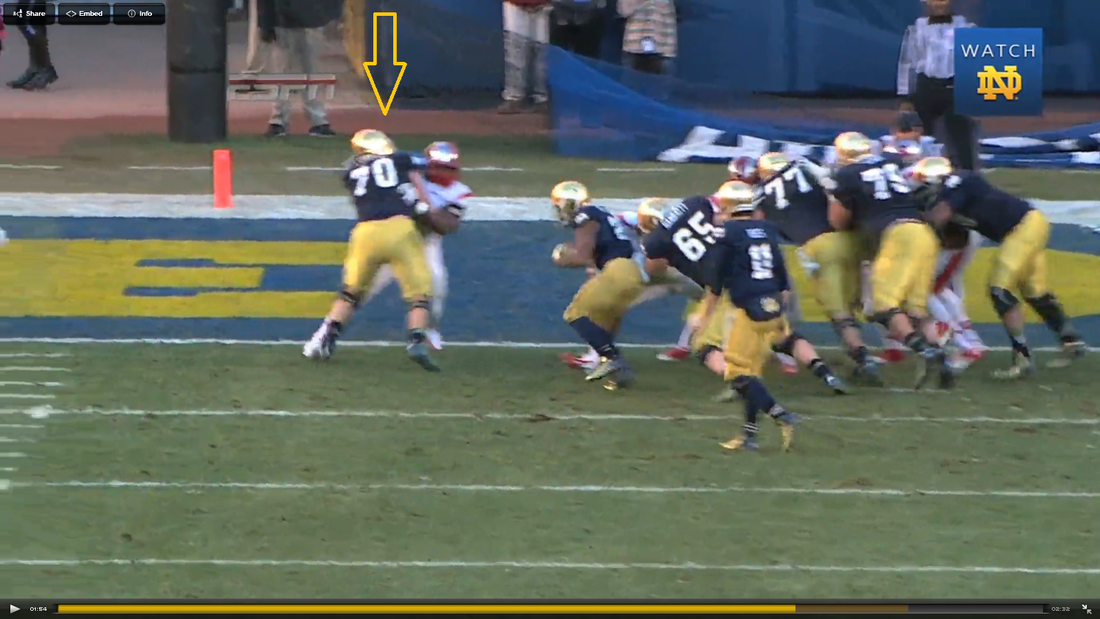 The Rutgers defender is working to fight across Martin's face here. The tendency is for linemen to stop their feet and end up with a holding call in this situation. Watch what Martin does. 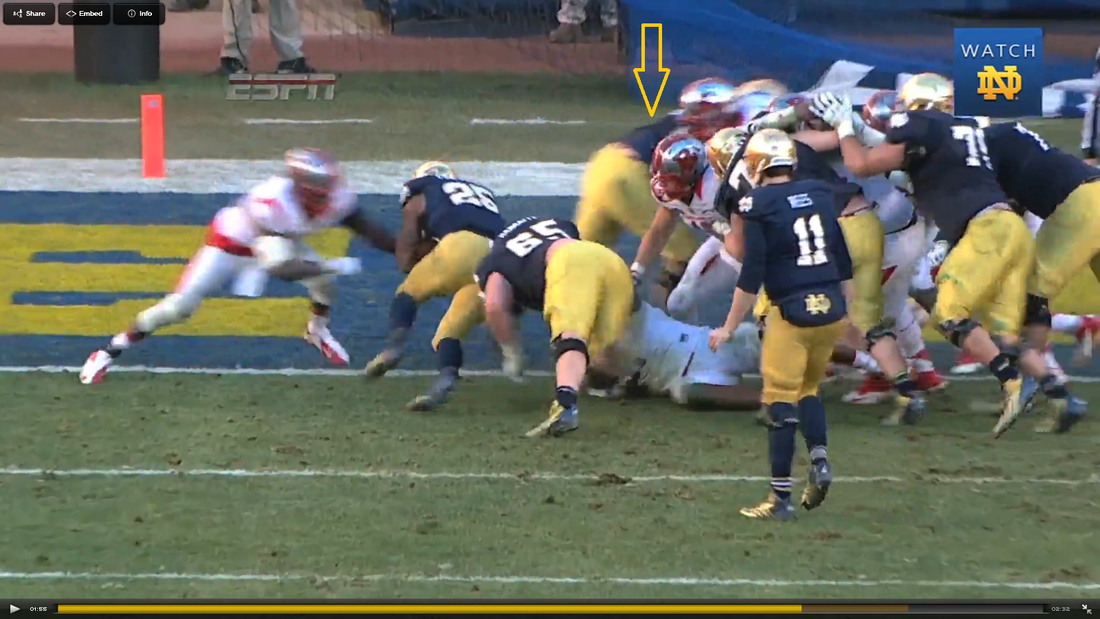 The yellow arrow is pointing at Martin's back as he drives the Rutgers defender across the formation. He kept his feet moving and bulldozed the defender. Zack Martin is a stud.

Two different ways to accomplish the same objective. In both examples, Notre Dame used formation to even out the numbers in the run game. In one example they did it by motioning into an old-school two back, two tight end set. In the other example they did it by spreading out the field. It's like having our cake and eating it too. I could get used to this.