Sources close to Irish Athletic Director Jack Swarbrick have confirmed that a move to an artificial or hybrid surface is a done deal for VanGorder's facial hair situation.

A source close to Notre Dame Athletic Director Jack Swarbrick leaked late Wednesday that Notre Dame is considering replacing newly tabbed Defensive Coordinator Brian VanGorder's mustache with an artificial or hybrid surface.  "Let's face it," said the source, "Brian VanGorder has been coaching football for 35 years and his mustache still looks like the Irish 50 yard line in November.  It is simply not consistent with the standard of excellence with which this University, athletic department, and football program comport themselves.  Notre Dame has heard the call for change."

Not wishing to duplicate its recent and repeated failures in maintaining Notre Dame Stadium's turf, Notre Dame has heard fan concerns that VanGorder's mustache will not take the beating of a 13-game season in northern Indiana.  Sources say that the Irish are looking to install an artificial surface, possibly with the use of some hair plugs, or even a hybrid system using VanGorder's current roots in conjunction with a makeup, spray-on, or even Rogaine adjunct.  Unfortunately, the latter requires every bit of the up-front capital expenditure with none of the operational cost savings vis-à-vis maintenance.  Also, sources are skeptical that VanGorder will submit to the daily application that such a system would require.

Many Notre Dame fans and alumni have been highly critical of the new Notre Dame Defensive Coordinator's mustache's wearability.  But traditionalists are reported to be highly resistant to any type of change to an artificial or even hybrid system.  Recent efforts to aerate VanGorder's mustache's root system have met with mixed results, said an athletic department source, who also confirmed that for the same reason the University is not considering restructuring VanGorder's mustache into a goatee.  The source also poo-pooed rumors of a soul-patch or fu-man-chu type restructuring.  "I think those ‘solutions' would only look worse on national television, and certainly would not stand the test of in-home visits with blue-chip recruits, many of whom are minors.  I mean, have you seen the thing?  It's creepy.  Implementing a soul patch or so-called ‘fu man chu' system would just be putting a band-aid on the problem." 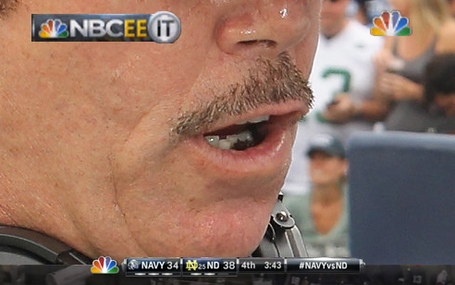 When asked for comment on Notre Dame Defensive Coordinator position's mustachioed lineage, former Irish DC Corwin Brown said only "this [expletive deleted] is premeditated, patnuh."  Notre Dame's opponents are also eyeing VanGorder's mustache skeptically.  Irish in-state rival Purdue's Head Coach Emeritus Joe Tiller could not be reached for comment.  But a source with knowledge of Tiller's own mustache said only this: "a Gentleman Caller it is not."  This is apparently a reference to the Notre Dame blogosphere's dubbing Tiller's 'stache "The Gentleman Caller."  Tiller is widely regarded as the father of "Basketball on Grass," but has nevertheless favored a completely natural, though longer and, some would say, less playable surface on the space between his own nose and upper lip.  In fact, it has long been rumored that former Irish Head Coach Charlie Weis tried to grow his own mustache out in preparation for the speed of USC in 2005.

One Foot Down interviewed a number of Irish fans for their perspectives.  Notre Dame traditionalists like bird lawyer Bob Downs are clinging stubbornly to the current natural surface in place on the upper lip of the Notre Dame Defensive Coordinator position. "In my day a man had a mustache," said Downs, who is also a golfing enthusiast, Viagra prescription holder, and avid discusser of mutual funds.  "But none of this artificial stuff.  Sounds frous frous if you ask me.  A solid mustache lets you know a man's not a pinko or a hippie.  Also, golf."

Notre Dame parent John Palmer agreed: "My little Timmy's a freshman in Morrissey.  He asked me what Brian VanGorder's mustache was made of.  You know what I told him?" asked Palmer, a single tear blazing a trail down his craggy, time-worn face. "Tradition, son. Tradition."  Palmer touted Notre Dame's much-ballyhooed tradition of natural-mustachioed coordinators: coaches like Corwin Brown, Jon Tenuta (intermittently), and possibly Kent Baer, though who could ever tell what that was.  Palmer's claims about Notre Dame's tradition of mustaches at the Defensive Coordinator position could not immediately be verified because the NCAA did not start keeping such statistics until 2007.

One Foot Down commenter and board-certified orthopedist Irishane could not immediately comment on increased injury potential "relative to" artificial or hybrid mustache surfaces.  "I've actually done a meta-analysis on this very subject.  Critics claim that artificial and hybrid mustaches have a higher incidence of injury.  Proponents claim that they provide a faster, truer wear, and favor the more talented wearer.  At this point the data are equivocal."

A 6'7", 270 lb. area man donning what appeared to be a fake glasses/nose/mustache combination, and who looked suspiciously like former standout Irish tight end Troy Niklas--but who, without prompting, emphatically denied that he was in fact Troy Niklas--was skeptical.  "I don't think your source NOSE what he's talking about," the man said, pointing to his fake nose, as if the obvious pun needed further embellishment.  "Troy Niklas?" he continued, again without prompting, "that's preposterous. How could I be Troy Niklas?  He wears a helmet.  Do you see a helmet here?  Also, he doesn't wear glasses.  And I--er he--HE shaved his mustache.  Or so I heard." 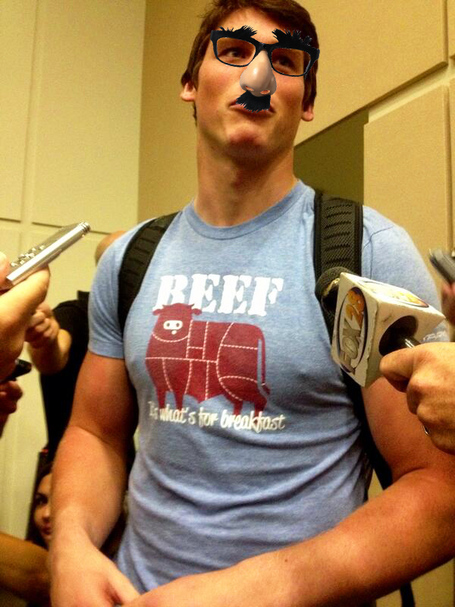 The rumors swirling around the Irish DC "don't pass the SMELL test" according to this area man, who insisted that One Foot Down print "smell" in bold, all caps, and italics if he was to be quoted. (Photo courtesy of Rachel Terlep of the Elkhart Truth).

One Foot Down will continue to keep its readers and commenters apprised of the situation and to search desperately for synonyms for "mustache."