After dozens of entries and hundreds of votes from you, the readers, the penultimate battles are ready to begin.

In last week's ELITE Eight, we predicted that all four matchups had the potential to be wild and crazy contests...but even so, this past week's voting still managed to catch all of us by surprise. (1) The Cam Rule continued its dominant run as the overall #1 seed, besting (8) Punterrific by a comfortable 70-23 margin. (2) The Snap Height ended the title aspirations of the tournament's Cinderella, (26) Hey Gary... by a score of 56-38. In the closest tilt of the Elite Eight, (21) Take and Score pulled off yet another shocking upset by defeating (13) SOON by a razor-thin 66-58 decision.

The fourth matchup, which pitted the powerhouse (3) Colonel found EG! against the uber-talented (6) Oregonian Shakespeare, was expected to be one of the closest contests of the entire tournament. However, to the amazement of all (and suspicion of many, myself included), the second day of voting took this matchup from a neck-and-neck battle to a stunning 855-47 conquest for the Colonel. Wishing to avoid any #TSWscandals, we scrutinized the site traffic for any signs of foul play; however, it was discovered that Colonel Ragsdale himself had (legitimately) seen and posted the link, causing hundreds of his loyal fans to (legitimately) swarm to OFD to (legitimately) vote for their beloved Crazy Colonel (non-members can vote in polls). Ultimately, the results were completely aboveboard--the Colonel is simply that popular. However, you other three contestants may rest easy--we got the Colonel's personal assurance that he won't "call in the cavalry" for any future rounds (he felt kinda bad about the whole thing), which allows for a fairer fight among OFD regulars. 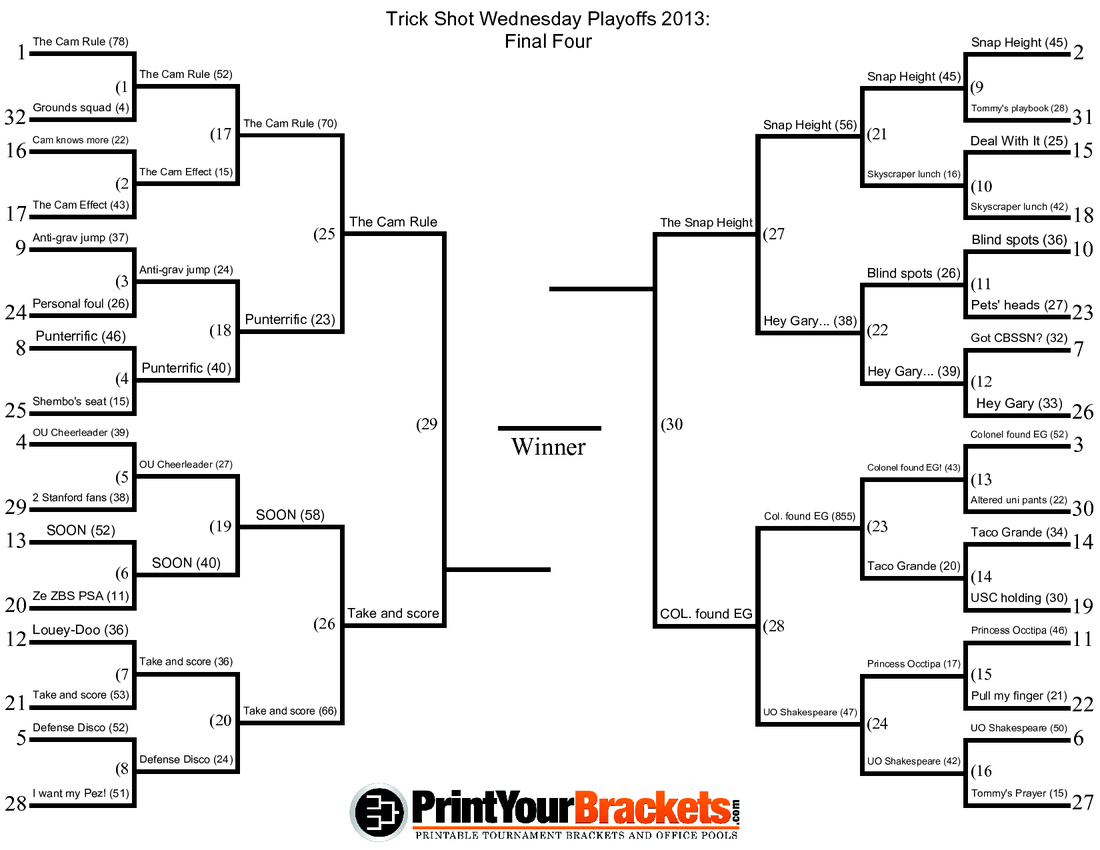 ANYways...this brings us to the excellence that is the 2013 TSW Final Four. Our first game features the quiet and consistently dominant (1) The Cam Rule, which climbed to the top of the heap in the most insanely competitive TSW ever and hasn't looked back since. Its opponent is the upstart at-large contender (21) Take and score, which is looking to write its own Cinderella story after defeating the #5, #12, and #13 seeds (which were all TSW weekly champions) and crashing the Final Four as the only non-#1-regional seed.

The second half of our doubleheader stars the old man of the tournament, (2) The Snap Height, who has dispatched all comers with ease. Who would've thought that its lightning-quick rise to popularity way back in the first-ever TSW would be a sign of things to come? And in this corner, we have the equally-face-meltingly-popular (3) Colonel found EG!, which romped to an unthinkably huge win over a legitimate title contender last week.

All four of these contestants are relying on YOU to get them into the Championship Game, so click the links below and make some history of your own! The polls close next Tuesday at noon, so get out there and vote early and often!