How will the Irish keep the improvisational Michigan QB contained under the lights Saturday Night?

After several years of trying to contain Denard Robinson, Notre Dame's defense heads into Saturday with a familiar task for this matchup: Keep an athletic quarterback inside the pocket, and prevent big, momentum changing plays. The only difference this year is that athletic quarterback is Devin Gardner, and that quarterback has a markedly better throwing arm than what the Irish are used to seeing from the Wolverines.

Much of the college football and NFL scouting world is interested in how Gardner will perform this season, as he seems to be a player with the raw measurables (6'5", 206 lb) and athletic ability that fit the new-wave NFL QB to a tee. Following an elbow injury to the throwing arm of Denard Robinson last season against Nebraska, Gardner stepped in to finish the final 5 games of the season for the Wolverines. He showed flashes of promise (see games against Iowa & South Carolina), but also showed some bad habits (see game against Ohio State) that showed there was a lot of polish left to be put on to the QB-turned-WR-turned-QB.

He showed some happy feet in the pocket and often pulled the ball down too early, something common among quarterbacks with the elusiveness Gardner possesses. Like many QBs with happy feet, his throws suffered when he was unable to use proper footwork, especially on the move (like Larz warned against this offseason). Even with those flaws, Gardner showed he had the skills to improvise and extend plays, always keeping his eyes downfield -- a true dual threat, who can pass for a huge 50 yard touchdown, or take off for the pylon with equal aplomb. Notre Dame fans may have déjà vu watching Gardner and recalling Everett Golson's playstyle when they first see him escape the pocket on Saturday night.

So has Gardner received the necessary finishing touches to take him to the next level as a big-time college QB? In Michigan's opening game against Central Michigan, he went 10 of 15 for 162 yards, 1 TD, & 2 INTs. He also ran 7 times for 52 yards and 2 rushing touchdowns. I think the jury is still out if Gardner has reached his full potential, but he certainly looked just fine against the Chippewas. Take a look at the below highlights to see just how dangerous he can be with his arm and his feet:

Notre Dame will need to have their defensive linemen all on the same page when it comes to containing Gardner. There are several ways that you can attack a mobile quarterback, but they ALL start with containing the quarterback in the pocket. It is much easier to get pressure on a semi-stationary target than it is to try and chase down a moving quarterback, and more pressure means less time that the Irish secondary will need to cover Michigan's receiving corps.

So what are the "golden rules" of playing QB contain as a defensive lineman? 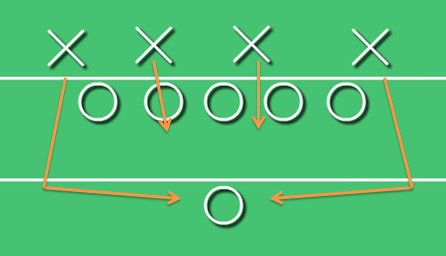 Some of the agitation from Notre Dame fans this past weekend came from Temple QB Connor Reilly getting out of the pocket and getting some easy first downs. Let's look at one of these plays to see if we can find which of the "Golden Rules of Contain" the Irish were guilty of breaking:

Here we see the Irish with 4 down linemen (Ishaq Williams as the CAT at the bottom of your screen), on a likely passing down: 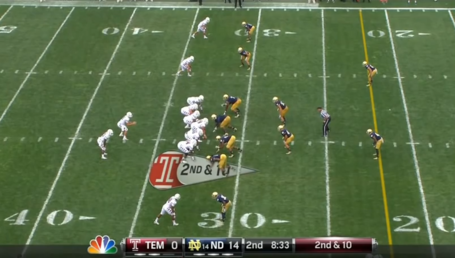 Immediately after the snap, we can see a decent pocket formed by the defensive line (other than Isaac Rochell who got washed out pretty early): 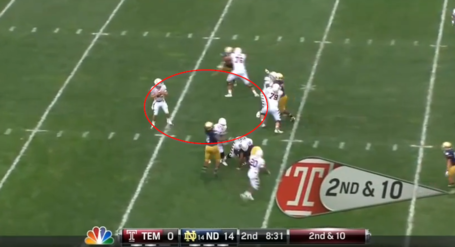 Here we see Stephon Tuitt getting around the tackle, looking to put a hit on a winding-up Reilly: 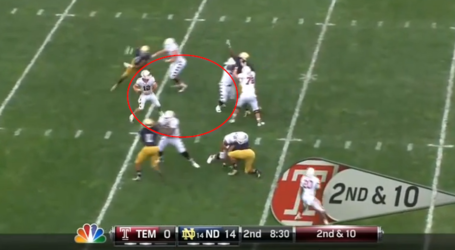 A split-second later, we see the pocket is actually broken, and Reilly has the window he needs to gain the first down pretty easily: 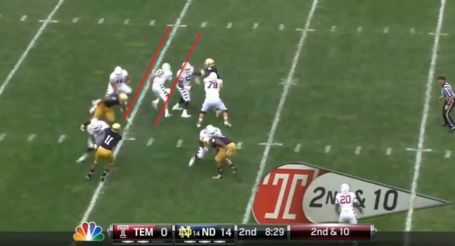 So what happened to let Reilly escape the pocket? Pretty clearly here, Stephon Tuitt broke the first rule of contain by getting too far upfield. As a defensive end against a mobile QB, "If you're past even, he's leavin'" (adapted from the old WR v DB adage). If Tuitt was playing better contain he would have broken off his rush prior to getting past Reilly, then started condensing the pocket.

(Video too long to chop, here is a direct link to the play in question)

The above is a good example of what can happen when the defensive line isn't playing contain, but it's a bit of low-hanging fruit given that the game was against Temple. I'm almost positive that with a 14-0 lead, Bob Diaco told his defensive line to pin their ears back and get to the QB at all costs, and they didn't concern themselves with QB contain in this game - assuming Reilly wasn't going to kill them with his feet.

What about a game where the Irish were playing to contain the opposing QB? Is our line well-versed enough to be able to implement the contain strategy against Devin Gardner come Saturday? Let's take a look at an impressive display of QB contain from the Notre Dame - Michigan game against Denard Robinson last season: 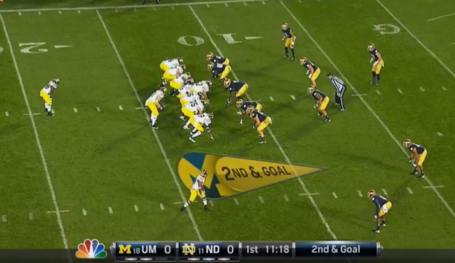 Here we see 4 down linemen again from the Irish, with Prince Shembo playing the CAT linebacker at the top of your screen. The down and distance don't scream pass, but it is not a great running down, either. 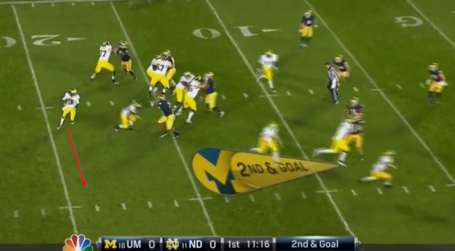 Immediately after the snap, it looks like Michigan is setting up a flood pattern to the right side of the field, and they decided that letting their running back try to pick up Stephon Tuitt was a good idea. Ideally, Tuitt will be able to shed this block and stop Robinson from rolling outside of the pocket. 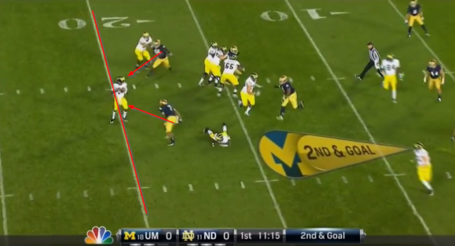 This image is a thing of beauty when your main goal is to contain the quarterback. Both Shembo and Tuitt have stopped their upfield progress, and have started to constrict the pocket by running at the back shoulder of Robinson. Note that neither one is attempting to simply sack the quarterback, they're looking to force him towards help. 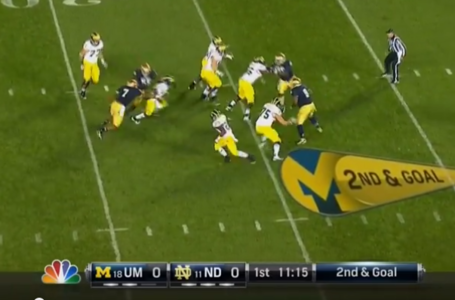 Tuitt and Nix have done their jobs, making sure that the only place Robinson has to escape is straight into their helping tackles. 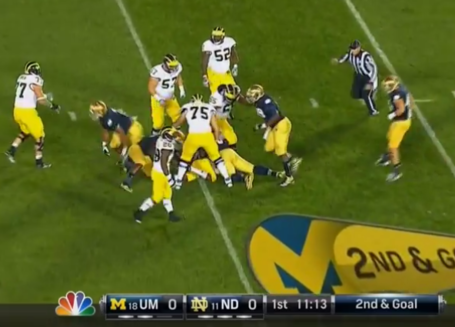 Obviously, Notre Dame has the ability to play VERY solid contain along their defensive front. The main difference between last year's game and this year's matchup is the fact that Denard Robinson did not have an overly threatening arm, allowing the somewhat slower to pressure containment scheme to be successful. If Notre Dame expects to put pressure onto Gardner simply by playing contain as they did against Robinson, I have a feeling Gardner will start finding open receivers with some regularity before the line is able to get home.

In that case, what wrinkles can Bob Diaco and the Irish defense throw into their QB containment schemes to get some faster pressure onto Gardner? For an answer, I looked back at the film of Gardner's worst game as a starting QB, last season at Ohio State. I saw what I expected to see (defensive line contain), but in addition, I saw a lot of blitzes up the middle from the linebackers on obvious passing downs. Let's take a look at one of these plays to see how the Buckeyes executed the pressures: 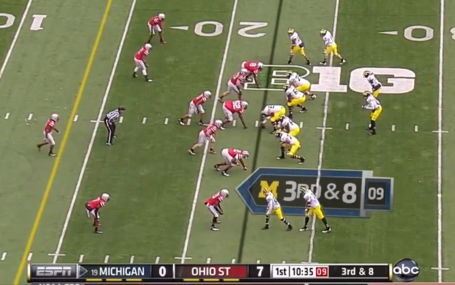 Michigan is in an obvious passing down, and Ohio State is showing 3 down linemen pre-snap, along with 3 potential blitzers. 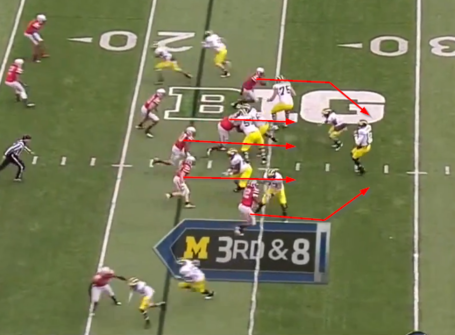 Ohio State sends two linebackers up the A and B gaps on the right side of the line, leaving the defensive tackle to pressure the opposite A gap. The ends have contain responsibility, just as in our previous example. 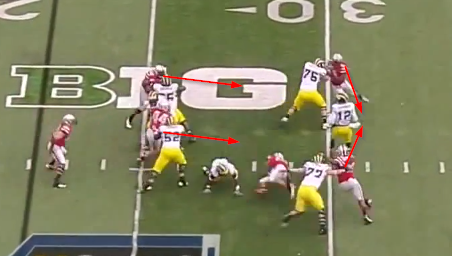 Michigan's running back does a decent job of blitz pickup on the B-gap blitzer, but the defensive ends have done a good job of contain and are now looking to force Gardner up into the pocket towards their help. 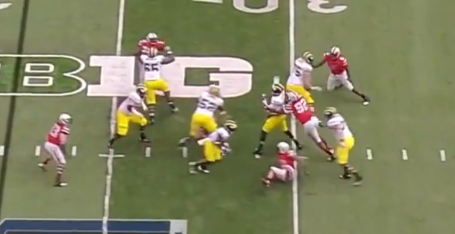 Gardner fails to step up into (relative) safety, and the edge rusher's line toward his back shoulder leads him to the perfect position to simply swat the ball from his throwing hand, resulting in a turnover for the Buckeyes.

What's important to understand about the above clip isn't just "contain can generate turnovers," it's the fact that, even if Gardner had the pocket presence to step up at the correct time, he would have been met by the A-Gap linebacker, an effective contain completed. Assuming that Gardner has improved his presence and awareness over the offseason, Notre Dame should still be able to generate sacks, but perhaps not spectacular turnovers as we see here.

Going into the game in Ann Arbor on Saturday night, I fully expect the Irish to be running contain on every passing down, and I expect to see some pressure from the ILB position on obvious passing downs (with the side benefit of taking weaker coverage players out of coverage). This, along with the fact that Michigan's interior OL is yet to be truly tested, means that may see a lot of pressure get to Gardner from straight up the middle. The most important part of generating that pressure, however is keeping contain on Gardner, no matter the call. If he escapes the pocket with regularity, it may be a long day for the Irish secondary and fans alike.