Welcome to another installment of football food.

Welcome to the next installment of football food. In the conversation under the California Burrito post a couple of weeks ago Murtaugh made a comment indicating that he was looking for some football food that was a little more Murica' and a little less south of the border. Since Murtaugh specifically mentioned hot dogs I figured that I would meet him in the middle. Enter the bacon wrapped hot dog delicacy better known as "Danger Dogs."

The legend is that Danger Dogs got their start with Tijuana street vendors who were cooking these bacon wrapped dogs for the Sailors outside of the local TJ bars. They were originally dubbed "Tijuana Bacon Dogs" but the term "Danger" quickly emerged because the street vendor versions feature some sketchy dogs that didn't exactly come out of a Hebrew National package. On the heels of their entrepreneurial success in TJ those vendors inevitably migrated north and Danger Dogs became commonplace on the streets of Los Angeles. As far as I'm concerned they crush anything on the menu at Pink's.

I had my first encounter with Danger Dogs when I attended the 2012 Rose Bowl. There were vendors outside the stadium before, and after the game that were grilling these up on little carts with stainless steel cooktops on them. After eating that first one I decided that in my personal hot dog realm these were going to be tough to beat. Shortly after that trip to the Rose Bowl I started tinkering around with making them at home.

The concept is simple. Wrap a hot dog in bacon, grill it, put it in a bun and drop some choice toppings on it. That's it. Simple, genius, and pretty fantastic football food that is easy to execute at home or at your tailgate. You can cook these in the oven, on a skillet/ hot plate or on the grill. I like to cook them on the grill.

8 of your favorite hot dogs

First you want to spiral wrap your dogs in the raw bacon strips. The bacon should have enough elasticity that you can easily tuck the end back underneath the strip itself. Try to wrap these dogs tight so that once you start grilling them the bacon stays put and cooks onto the dog.

There are a seemingly endless number of options that you can top these with but my favorite way to garnish them is with a little bit of grilled jalapeno, onion and garlic. That was the way I had my first one outside of the Rose Bowl and that remains my favorite way to top them today.

I like to slice up the jalapeno, onion, and garlic right after I wrap the dogs. It doesn't really matter how you slice them but I tend to slice the jalapenos and onions into fajita style strips. The garlic clove just gets sliced thin. I then take those toppings and drop them onto a piece of tin foil.

As soon as the grill is ready to start cooking I drop a small pat of butter on the toppings and sprinkle them with ice chips. I then wrap them up tight in the foil and make sure that I fold up the seam so that it is on top. This keeps the maximum amount of moisture inside the foil once it heats up on the grill. That little package of foil is going on the grill about 5-10 minutes before the dogs. 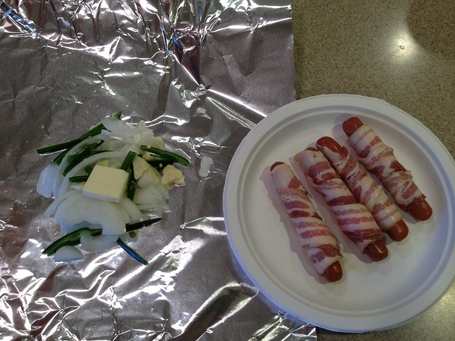 When that foil puffs up a little bit those veggies are starting to steam. It is now time to get those bacon wrapped dogs on the grill and get them cooking. These dogs are going to need your undivided attention for about 8 minutes. You want to slowly roll these a 1/4 turn at a time to cook the bacon evenly around the dog. As that bacon starts to cook it will also start to drip a little grease. That grease will cause some nice flare ups on your grill. So if you walk away and leave these unattended you can come back and find them completely engulfed in flames!

Don't let that happen. Just keep them those 1/4 turns going and relocate them on the grill if necessary. As long as you keep a close eye on them you will be fine. As soon as the bacon is cooked to your liking the dogs will be ready to come off.

Remove your dogs, and your packet of tin foil filled with those steamed jalapenos, onions, and garlic and you are ready to eat. Put these dogs in buns, load up your toppings and enjoy. I also like to eat these with sliced avocado and pico de gallo on occasion. Our own ndmspaint hit us up with a great pico recipe in this post a few weeks ago so use that to make the pico if you need it.

Any other toppings that sound good to you probably work too. When you start out with a bacon wrapped hot dog it is pretty tough to mess it up.

Tell us about your version!