Happy Wednesday, you characters--thanks for coming to our second edition of Trick Shot Wednesday! In last week's contest, the photo of Amir catching a deflected snap garnered captions ranging from Lion King lyrics to suggestions for the new Roman Missal translation (FUN FACT: The rec's for all the "Mass translations" totaled a staggering 70 gold stars). However, as the competition grew fierce, one man suddenly walked in, dropped a memetic bombshell, and walked out with a margin of victory worthy of an SEC-FCS matchup: 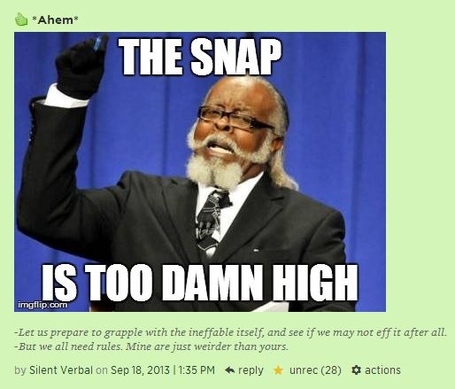 Congratulations, Silent Verbal. You have won this week's crown as King of the Commentariat. May you be a capable puppet dictator rule wisely, and may your snaps never be too high until you relinquish the crown next week forever and ever, amen.

This week's TSW features a shot of Louis Nix III ripping the helmet off of MSU running back Nick Hill. You, the OFD Commentariat, need to tell people what's happening and/or being said in this photo! Same rules as last time: feel free to use GIFs, memes, photos, or phrases for your captions, and vote as many times as you like this week via clicking the shiny gold star under a comment. Caption away!