I know everyone is still upset after the Irish lost won on Saturday and we all want to know what is going on with this team, so let's fire up the projector and step into the OFD Film Room for a postmortem of Notre Dame's game against the Spartans.

First of all, here's the look the Michigan State defense gave Tommy Rees on almost each and every snap on Saturday: 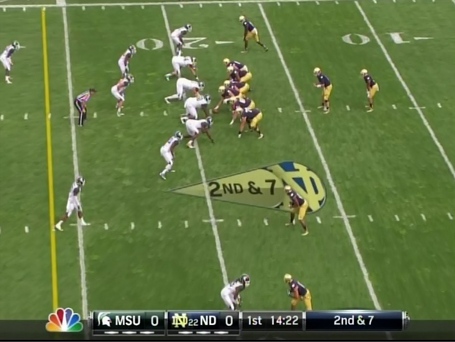 The Spartans kept every defender within ten yards of the line of scrimmage nearly the entire game. They also kept their outside linebacker to the two wide receiver side shaded towards the line of scrimmage to aggressively play the run while rotating their safeties to cover the slot receiver. This game plan is almost exactly what MSU did the last time they visited Notre Dame Stadium.

This defense is meant to be a brick wall against the run. The Spartans already have four linemen and two linebackers in the box to match up with Notre Dame's six blockers, and when you add in the linebacker looking to attack the line during run plays, Michigan State essentially had a numbers advantage versus the run. PBurns broke down the importance of having a numbers advantage in a zone blocking scheme like Notre Dame's, and it's obvious Michigan State meant to take that away.

So how do you counter this type of defense? Normally, the slot receiver should have a big day in a game like this. He's matched up against either a safety or a linebacker, usually one on one. However, Notre Dame hasn't gotten good production from its slot receivers, so that didn't work. In 2011, the Irish still managed an adequate ground game and then made some big plays off of play-action, but there was nothing adequate about the running game on Saturday.

Instead, Coach Kelly and Coach Martin broke out a little bit of misdirection. They used jet sweep action to regain a numbers advantage.

Here's an example from early in the game. 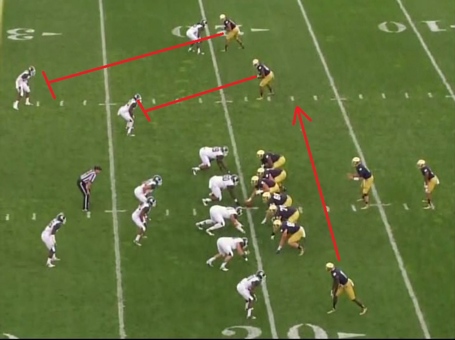 DaVaris Daniels goes in motion across the formation. The two outside receivers go inside to block the linebacker and safety. Because Michigan State is playing such an aggressive defense against the run, the two cornerbacks have to play man coverage. So when James Onwualu blocks the safety, he takes the corner with him, effectively blocking him. 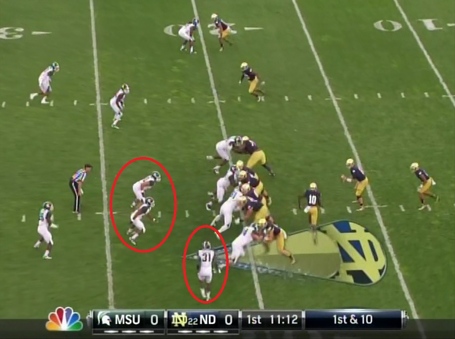 When Daniels goes in motion, none of the circled linebackers shift to compensate. Daniels is able to get outside and gain seven yards.

Kelly and Martin used this play numerous times, sometimes giving it to Daniels and other times handing it off to Cam McDaniel, but it didn't have much success.

Kelly and Martin also tried putting two tight ends to one side of the formation. Michigan State didn't do anything different on defense, and the extra tight end should have helped in the running game. Unfortunately, Ben Koyack continues to struggle as a run blocker. I'm a little surprised we haven't seen Alex Welch because I always thought he was a good blocker, but I'll trust the coaches on that one, I guess.

There is one other way to beat Michigan State's defense and we saw it quite a bit on Saturday. With nearly the whole defense playing close to the line of scrimmage to stop the run there is going to be receivers in single coverage. And when Tommy Rees sees single coverage, he's going deep. Likely Michigan State knew this and gambled that Rees wouldn't be able to consistently hit the deep ball. They were right.

Here's Notre Dame lined up with two tight ends. The corners are playing press coverage on the receivers. The tight ends release from the line and take the safeties with them. Rees has Chris Brown (lined up at the bottom) open down the sideline, but threw the ball too far outside. 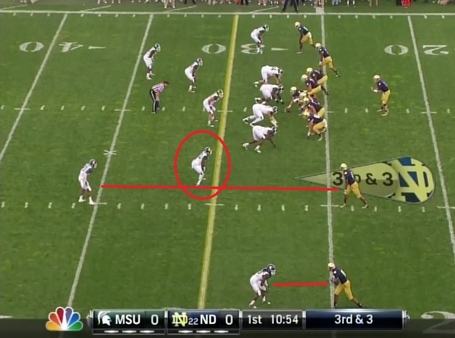 Here's Michigan State lined up in their typical defense. It looks like the safety is covering the George Atkinson in the slot, but right before the snap the linebacker shifts back to cover GAIII. This makes sure Tommy checks into a pass play but still leaves the Spartans with defenders to cover the pass. 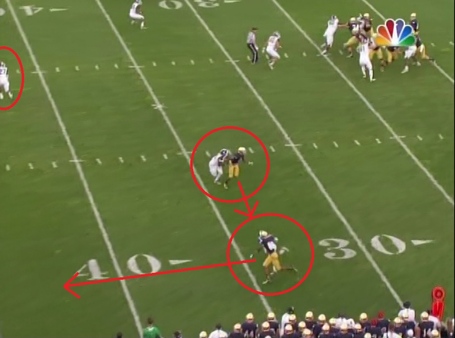 The safety ends up bailing to cover the middle of the field, leaving Corey Robinson and Atkinson in single coverage. Tommy goes deep and manages to hit Robinson.

That was probably the source of a lot of frustration during this game. The short and intermediate passing game seemed nonexistent. I like the way Rees has been playing this season, but is it really the best strategy to ask him to throw thirty yards bombs on 3rd and 3? I get that teams are taking away the run, but there has to be better answers than fade routes down the sideline.

I could spend the rest of this post ranting about the poor offensive game plans we've seen this season and wax poetically about how great everything will be when Everett Golson comes back, but let's talk about something fun instead.

The Irish used two packaged plays against Michigan State. The first was a bubble screen packaged with an inside zone run. 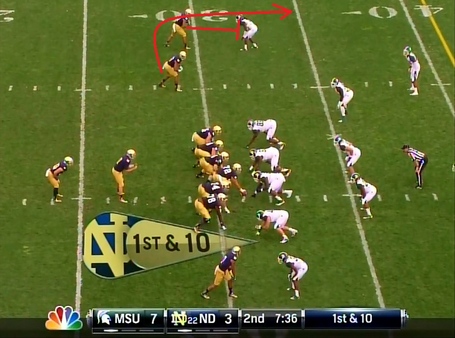 Rees has the option of either handing the ball off to Cam McDaniel on an inside zone run to the right or throw a bubble screen to Daniel Smith to the left.

Rees determines which option he'll choose before the snap. If Michigan State brings too many defenders into the box and leaves the field side undefended (which they are in the picture above), Rees will throw the screen pass. If the defense spreads out to take away the screen, McDaniel should have more room to run and Rees will hand it off.

It is interesting to note that the inside zone portion of the play was designed to go to the weak (right) side. The tight end on the left side already forces Michigan State to put more defenders to that side. If the bubble screen is effective, it should force the defense to shift even more to the offense's left side, creating even more room for the inside zone run. Notre Dame didn't have a ton of success with this play because of poor perimeter blocking, but that's the theory.

The second packaged play was a variation of the popular stick/draw combo. Unlike the previous play, the quarterback makes his read after the snap. An inside receiver - either a tight end or slot receiver - runs a stick route 5-10 yards down field. Basically, he runs straight ahead and then turns around. The quarterback watches the outside linebacker. If we widens to cover the receiver, the quarterback hands the ball off on a run play, typically a draw. If the linebacker comes down to stop the run, the quarterback throws to the stick route.

Notre Dame has used the stick/draw combination before, but on Saturday they used a stick/counter combo instead. 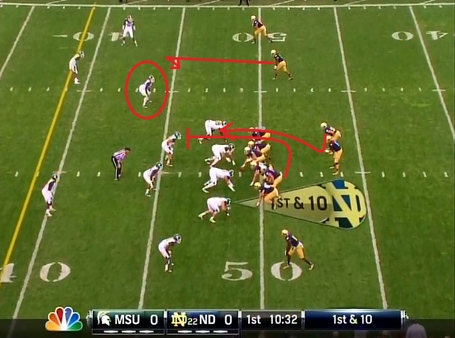 The counter play was a staple of Notre Dame's run game until it virtually disappeared last season. On the counter play, the running back takes the hand-off and fakes a run across the quarterback. In the picture above, that would be to the left. Meanwhile, the tackle to the tight end side - Zach Martin on the left side in this example - pulls and leads the way for the running back.

Rees's read is the outside linebacker. If he covers the stick, Rees hands off on the counter. If he comes to stop the run, Rees throws the stick. 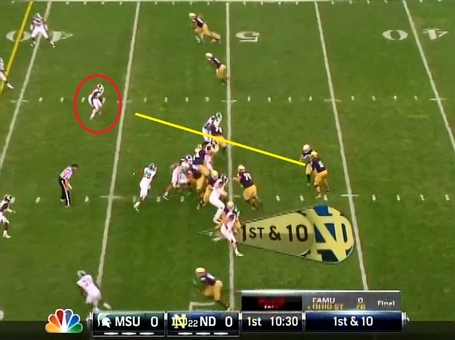 You can see Rees reading the linebacker. He's planted where he is and Rees should hand the ball off. Instead, he throws to the stick route and almost hits the linebacker in the chest. He was lucky the pass didn't go for six points the other way. 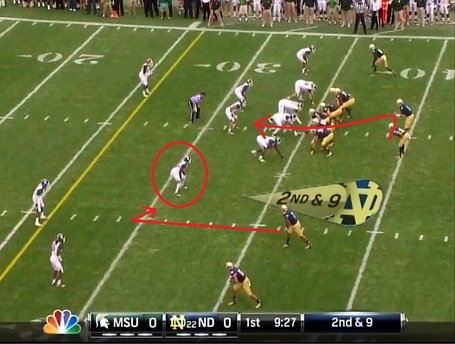 Here's the same play, later in the drive. The play is run to the opposite side and Ronnie Stanley pulls on the counter run. 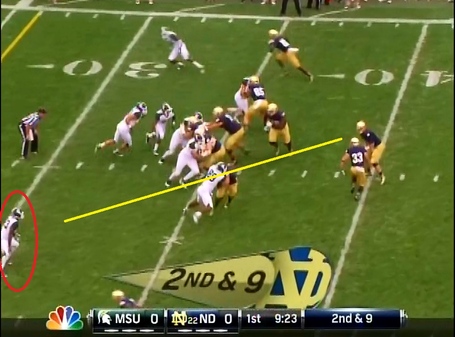 Again, Tommy is reading the outside linebacker. He stays wide again and this time Rees hands the ball off. McDaniel comes away with a nice pickup of about seven yards.

See, wasn't that more fun than gnashing our teeth and rending our garments over an overabundance of deep passes? Football is still a fun game so let's focus on that instead.