The Audible Adventures of Tommy Rees or: How I Learned to Stop Worrying and Love the Count

Much of the discussion surrounding the Notre Dame offense, and more specifically the playcalling, has been the amount of times that Tommy Rees is making checks at the line of scrimmage. Many have called for Brian Kelly and Chuck Martin to simply give Rees the play and have him run it (often referred to as "call it and haul it"). While this is certainly a valid point, especially in the red zone, the basis of Rees checking out of plays is at the heart of the spread offense zone blocking scheme.

Coach Kelly has referred to teams "stacking the box" against the Irish with some regularity, and has praised his senior quarterback for checking out of bad run looks. What are Brian Kelly and Tommy Rees seeing at the line of scrimmage that makes them think the run play that is called will struggle? For that, we can investigate how the offensive line is taught to block in a zone scheme.

Generally, when the offense is in a formation with one tight end and one running back (a very common formation for Notre Dame), the defense will line up with seven men in the box, as seen below for a 4-3 defense: 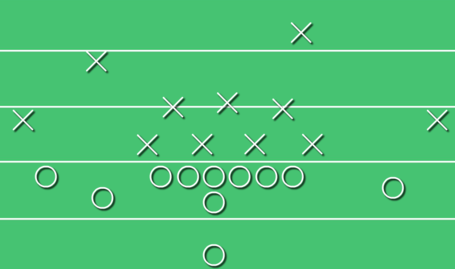 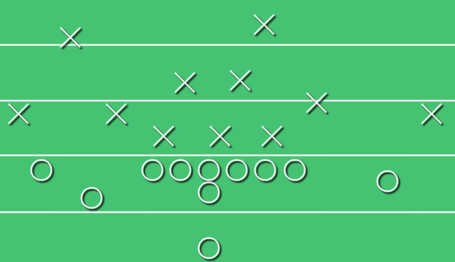 One of the beautiful things about the zone blocking scheme is that as long as your center and quarterback can count, you should be able to determine when you have a good run and who needs to block whom. When the quarterback gets the offense up to the line, his first read is for the defensive front, making a simple count on each side of the midline of the formation, which is essentially a line bisecting the center's helmet. This is called (quite aptly) "getting the count." Counting from inside out gives the layout of the defensive front and lets the quarterback know where his most advantageous run is. Below are basic looks at the same formations from above, with counts displayed how they would be assigned: 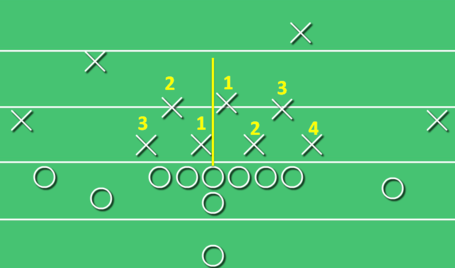 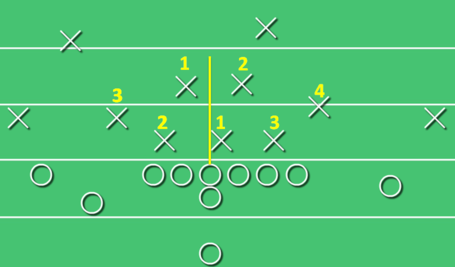 What the quarterback is looking for is a side of the line where they have outnumbered the defensive front. In both cases above, the weakside (left) of the formation has 3 blockers against 3 defenders, and the strongside (right) of the formation has 4 blockers against 4 defenders (the center counts both ways). Most teams will call this zero|zero, as there is no advantage to either side of the line. If a zone team is confident in their run game, they will feel confident running into a zero look, trusting their offensive line to get a hat on a hat and their running back to make the correct cut.

If the defense walks up a safety to help with the threat of a run, what they are looking to accomplish is to outnumber the offense at the point of attack. With one fewer linemen than box defenders, one of the defenders should be free to tackle the ball carrier. A good pre-snap look at how this would count out for a zone blocking team is below: 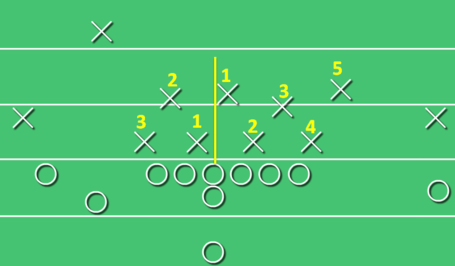 Most offensive teams would call this alignment zero|minus-one, meaning they are even on the weak side (zero) and outmanned by one player on the strong side (minus-one). As you can see from the image, the middle linebacker can just as easily flow to the weakside should the run flow there, which makes this a bad run look no matter how the offense plays it. This type of situation is exactly where Brian Kelly wants to see Rees check out of the run play and into a pass -- running into a minus-one front is almost certain to go for no gain. There are some moments where it is still OK to do so, mostly short-yardage situations, or if a defensive tendency has been noticed in such situations; but for the most part running into minus fronts is verboten.

Football, at its core, is all about outnumbering your opponent. Whether it's making one defender cover two receivers, or blocking 3 defenders with 4 linemen, the team that can get into the position of having an extra man more often will win the battle. Smashmouth power teams like Stanford and Alabama will gain the numerical advantage by having guards and fullbacks lead running backs through a hole, bringing extra players to the point of attack. Spread teams gain the advantage by removing defenders from the box that need to worry about the players on the outside and increasing the distance they need to cover in run support. They do this by utilizing bubble screens, vertical passing, and often a running threat at the QB position.

Since the Irish lack a running threat at the QB position, how can they gain the advantage other than by standard spread techniques in order to open up the running game? Simply, they can motion themselves into the driver's seat. Let's take a look at an example from the Purdue game that illustrates this point: 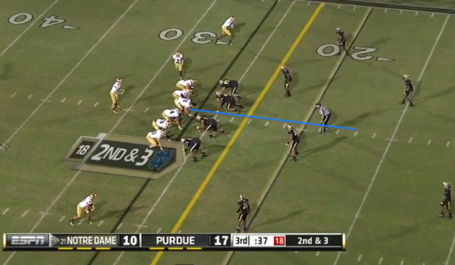 Here we see the Irish come to the line in a 4-wide set, with Troy Niklas attached to the right side of the offensive line. Prior to the snap, Purdue is showing 5 defenders in the box. The offensive line would call this plus-one|plus-one, a great run look, if the Irish can take advantage of it. 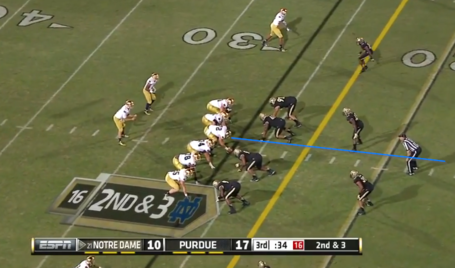 Carlisle has motioned into the backfield, and the defender who was shading him over the slot has moved into the box. The offensive line would call this zero|plus-one -- the Irish have the advantage to the strong side of the formation, that was created by the initial alignment and empty backfield. An added bonus is the alignment of Purdue's weakside defensive tackle, who has filled the B gap, leaving the A gap with no defender, allowing center Nick Martin to focus solely on getting to the second level.

The Irish run an outside zone that picks up a first down, despite a few poor blocks. Even with a missed assignment or two, simply having the numbers advantage was good enough on this play:

Against the Spartans, if the Irish are going to have any success in the running game, I suspect they will have to do so via motion pre-snap, or misdirection post snap (taking a defender out of the play due to overpursuit). They have yet to show this season if they can win zero|zero run calls, and I think with the weapons Brian Kelly has at wide receiver, they will continue to throw the ball in those situations. I would expect to see a bit more of the orbit sweep action that Notre Dame used so often against BYU last season, and perhaps some H-back motion with Ben Koyack to try and tip the numbers in Notre Dame's advantage.

Just remember: When you see Tommy use his beautiful mind to check out of a play Saturday, the numbers told him to do it. Just like another extremely intelligent man: 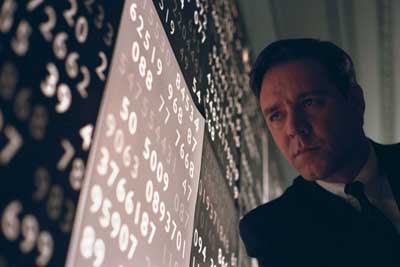