"We laugh so we don't cry, my friends."--Mack Brown, probably

Happy Hump Day, everyone! [cue mandatory Geico commercial] This is often the slowest part of the week for most folks, and that's certainly true here at the OFD offices as well. [Note to self: Ask Eric why he hasn't reloaded my stapler yet--it's been, like, 3 weeks.] Most of the analysis, celebration, and/or hand-wringing from the previous game has slowed to a crawl, but it's not yet time to start pregaming for the next matchup, either. So to liven up the middle of the week and get your creative juices flowing, we're starting a new weekly OFD tradition: Trick Shot Wednesday! Some people needed a little reminder about it this morning: 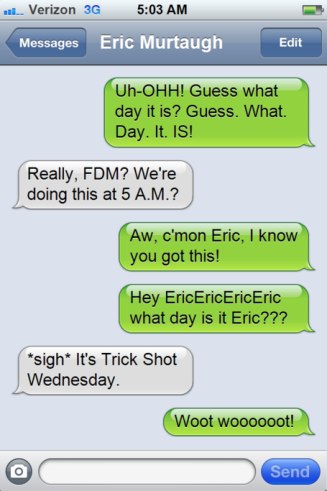 Every Wednesday morning, we'll post a humorous photo from the previous week's game (it may not always be from the ND game) and will invite you, the commentariat, to affix your own clever captions to it. You may use quotes, phrases, .gifs, or photos in your answers, and you may offer as many suggestions as you like. Whenever you see a caption that you find particularly humorous, vote for it by giving it a gold star; since we're all about the gold stars here, you can shower them over as many captions as you wish! Whoever garners the most rec's by the following Wednesday will be crowned "King of the Commentariat"...until the next Wednesday, whereupon your newfound fame will vanish more quickly than a Whopper in front of Charlie Weis.

This week features the fun little play from early in the Purdue game where the snap went off of Tommy's hands and into Amir's. How would you caption this gem?

[Note: Thanks to Winging It In Motown's Summer Photo series for the inspiration!]