Notre Dame shook off one of the worst first halves of the Kelly era to win a close game at Purdue.

Purdue was sitting on short routes all day and flying up to make tackles on screens on a consistent basis. After limiting the Boilers to 19 yards on 5 plays to force a punt the Irish got the ball back with 12:50 left in the fourth quarter and connected on a deep ball on the first play.

How Daniels did not step out of bounds I know not. Overall, just an incredible display of athleticism by DaVaris, who by the way, now has 17 receptions, 299 yards, and 4 touchdowns in 7 quarters of play this season. Yeah, he's arriving in a hurry.

And can we talk about this throw by Rees? Like a lot? We need positive stuff to talk about!

The first half was brutal. Utterly brutal. The first four series were really ugly (22 plays, 58 yards) and it's unacceptable that Purdue pretty much knew what was coming simply by the way in which Notre Dame lined up and/or motioned players. In this respect the coaching staff is failing the players.

That said, I still err on the side of optimism with this unit because the pieces are there for success (not so sure we can say that about the defense right now), the coaches can still make some changes to the game-plan, and damn it Rees is playing very well right now.

Not being able to run the ball against Purdue is clearly not a good sign and that's where the biggest worry for me resides. I've definitely wanted Kelly to embrace a more spread-ish offense complete with some up-tempo, multiple back sets, and a little diamond formation thrown in there but this isn't something he plans on doing. The offense now seems stuck in no-man's land with a very spread dependent pass game (which is fine) but a running game that is too simple, predictable, lacking a mobile quarterback, with backs who aren't making defenders miss in open space.

After this game against Purdue I'm feeling awfully Harumph-y about the run game. I'm definitely buying that the offensive line is struggling to get in a groove, hone their craft, and generally dominate in the run game like they should with the offense currently constructed as is. The sad truth may also be that we're just not that good at running the ball. Everyone bemoaned the lack of running on first down against Michigan but all four of the opening series against Purdue led off with a run gaining a whopping 2 yards.

Even in the second half when the offense started clicking, the coaching staff made some adjustments, the rushing game didn't really look much better. The first half saw the running backs gain 36 yards on 14 carries (2.5 per rush) and in the second half they improved to a still-stinky 65 yards on 19 carries (3.4 per rush). Even the final series with McDaniel featured 4 out of 10 runs that went for 2 yards or less---with 3 separate runs gaining 0 yards a piece.

It didn't quite seal the game like the last offensive drive but the Irish had trailed all game, finally took a lead, and then in the span of a couple minutes found themselves up 14 points after Jackson took this interception to the house. Purdue answered with a touchdown drive to put things in doubt but I'm sure many fans felt pretty good, even with the way the game played out, that the Boilers weren't going to be able to mount 3 scoring drives with about 12 minutes to play in the game.

Surprising Stat: 11 for 16 Third Down Conversions

As viewers it can be difficult to shake off the performance we see early in the game and this felt like a game where Notre Dame was only converting maybe 25 percent of their third downs. Yet, they finished just under 69 percent.

The Irish failed to convert on their first 3 attempts on third down but ended up finishing the game converting 11 of the last 13 attempts. That's a nice recovery.

TV Call of the Game

Not an announcer this time but a Microsoft commercial verbalizing what every Notre Dame fan was thinking during the first half of action. 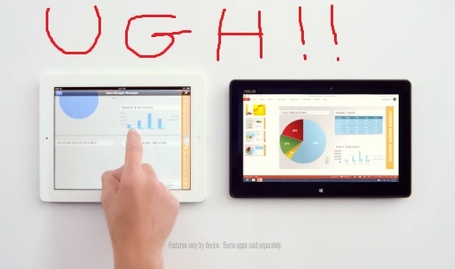 His numbers aren't anything special but he made some big plays. He ripped away an interception for a completion early in the game, took a helmet to his helmet-less head near the goal line, and sealed the game with the final drive on 11 carries.

Missed Opportunity: Failed 3rd Down at the 3 before the Half

I'm really not as against the fade as most fans and Daniels did prove to be the hot hand on this night. Still, DaVaris ended up slipping on his route, the ball was nearly picked off (can you imagine how deflating that would have been), and McDaniel had strung together a few decent runs right before getting bloodied.

At this point in the game I was okay with settling for a field goal, and they did so anyway, so it would have been nice to try something on the ground to try and get six points.

Bad Flag of the Game: N/A

This was a shockingly well refereed game, I thought. Perhaps the pass interference against Russell on Purdue's last scoring drive was a little ticky tacky but that's a call the home team will get in that situation down by 14 points.

The first half was an ug-mug fest but Rees was really never playing that poorly. He made a couple bad throws but could have really benefited from a few drops turning into solid gains---particularly a third down pass to Troy Niklas early in the second quarter.

After some adjustments in the second half Rees went 12 for 16 with 217 yards and 2 touchdowns including the money deep ball to Daniels. Rees has only 2 turnovers through three games and is on pace for almost 4,000 passing yards. Who wouldn't take that right now?

Another crappy figure but it's skewed by another fourth quarter team kneel down---the second on the season. Notre Dame scored two touchdowns in the red zone and then the failed fade pass to Daniels to end the first half.

Below average punting, Jones fielding a punt at the 5-yard line, and below average coverage on kickoffs. Two steps forward then another step back.

There's something that needs to be said about Rees getting the ball out of his hand quickly on many passing plays but if Golson was the quarterback (or someone with even decent running ability) I don't think the Irish offensive line would have given up a sack on the season yet.

Like I said above something isn't quite right with the offense and it's affecting the linemen in the running game. I could be wrong but we saw Zack Martin make a couple mistakes on blocking assignments and not picking up linebackers and that never happens.

The defensive line is still playing really well, I think. They could use a couple lanky Demarcus Ware-types with incredible edge speed, but who doesn't? The line is getting some opportunities for sacks but just aren't fast enough to close the deal.

You can't complain about the line's run defense though. Purdue running backs only gained 30 yards on 15 carries and the Boilers as a team only gained 38 yards on 21 carries. Purdue's 1.8 yards per carry would have been the second best run defense effort last season which is saying something.

The usual suspects were out there again. Greg Bryant got a couple snaps and 1 carry for 2 yards. Cole Luke continues as the nickel corner and had 2 tackles. James Onwualu notched a tackle on special teams. Steve Elmer came in after Chris Watt was shaken up. Corey Robinson got a few snaps and drew a pass interference call.

The blocking was not good for most of the game but I was really disappointed with Carlisle's vision, cutting, and decision-making in this game. I think it's clear the coaching staff isn't going to rely on Atkinson to be the main guy and I'm not sold that McDaniel will ever be the main man---although maybe he should be, right? This leaves either Carlisle or the freshmen to step up so ultimately that puts a lot on Carlisle's plate.

I'd be lying if I said I wasn't worried about keeping Tarean Folston's attention committed to Notre Dame.

I wonder if Jones was more banged up than the staff was letting on after Michigan. He didn't seem to be a focus early in the game and wasn't on the field as much as he usually is.

A big part to the defense stepping things up is getting the corners to play better. Russell has been a lot worse than Jackson but I just refuse to believe that these guys can't turn it around.

Was this the worst defensive effort in which Notre Dame held an opponent under 300 total yards?

Stephon Tuitt really isn't playing well. At this rate does he even leave school after his junior year? That's premature at this point I know but c'mon big boy you have to start making some plays! I thought he played fairly well against Michigan but this was a step back against Purdue. With Nix taking on 2 and 3 players inside Tuitt can't sit idly by as a potential All-American.

I'm not sure there are the right answers at middle linebacker and safety. Well, athletically the defense really could use a big jump forward from Elijah Shumate and Max Redfield so technically there are some answers there. I don't think we can say the same about middle linebacker. And until something changes I don't know how the defense can be anything better than good with 4 starters being liabilities. I doubt we'll see anything drastic like putting someone like Collinsworth at MLB during passing situations but that has to be better than 261 pound Ishaq Williams. So far this season the number one problem by a country mile has been opposing offenses' ability to work the middle of the field in the passing game. The Irish are running 250 to 260 pound athletes in the middle so what do we expect? Against Purdue their running back led the team in receptions and their tight end was second. That was 60% of the Boilermakers catches alone and almost half their passing yardage. If they can clean just a few of those receptions up and tackle better it would go a long way.