NDMSpaint provides some unique insight into the upcoming game against Purdue

Q:  Hey Paint, can you teach me how to MSPaint Purdue Pete?

A:  Yes.  Emphatic yes.  That is a brilliant idea --  why didn't I think of that earlier this week? What better way to look forward to the upcoming game than to study our opponent from an angle that we might not yet have touched on:  the mascot.  Leave no stone unturned!

Let's start with the basics.  What do we know about Purdue Pete?  First thing that comes to mind is the empty gaze that's permafixed about three or four thousand miles away from the game.  That and the hard hat and muscular face.  So with that in mind, let's fire up Windows 95, break out the mouse, and draw a couple of fried eggs with big black empty yolks for eyes, a bulbous convex forehead, and an even more bulbous and convex chin.  Channel Barry Bonds or the lead singer from Extreme when making the curvy forehead.  Don't forget the forehead vein! 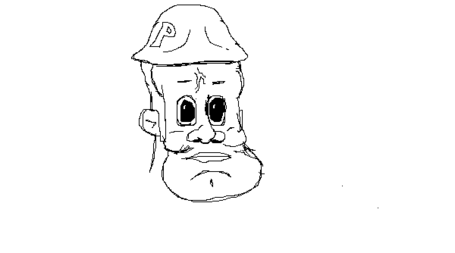 Secondly, and probably most importantly, we know that Purdue Pete is swole from boilering up and banging massive drums.  So we need to draw tons of muscles.  We also need to decide on how to position his arms.  I'll roll with having them kind of menacingly in front of him in case whatever it is that's three or four thousand miles away starts getting any ideas: 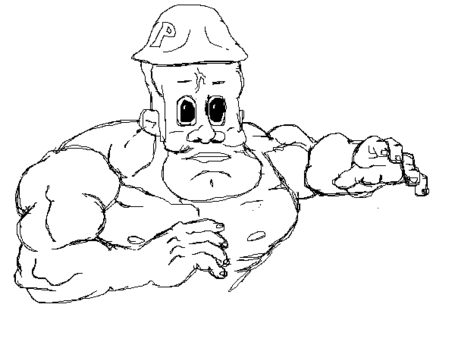 Next, attire.  Pretty sure he wears a beater or wrestling undies and booties.  Let's go with the latter and finish up the rest of the muscles: 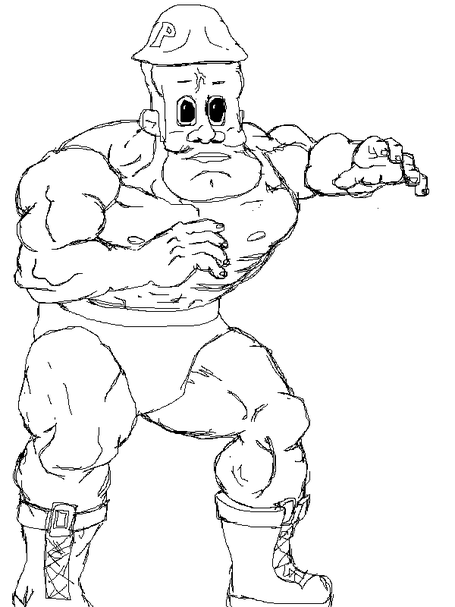 That's what I'm talking about!  I would not mess with this guy.  Finally, we just need to add some accessories and details, like scars from welding and getting splashed with boiling water, some wristbands, and maybe a beard or two.  While we're at it, let's color it in and cap it off with some chiaroscuro shading here and there. 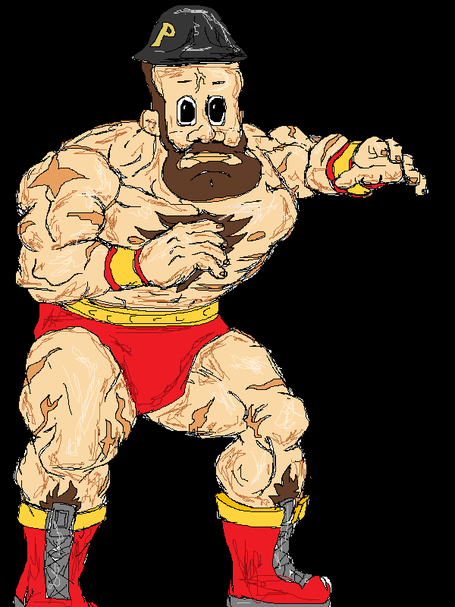 Zdravstvuj!  This guy absolutely OWNS now.  I'm talking all kinds of throws for half damage, incredible reach, virtually invincible, the whole nine yards.  Awesome.  Now it's time to find my old roommate so I can issue some absolute crime and punishment for a few hours.  Round one, fight!