Pattern matching, playmaking, rolling coverages, and execution in the Irish defensive backfield. Looking back at Michigan and forward to Purdue: What do the Irish need to fix?

Share All sharing options for: OFD Films Purdue Preview: Shoring up the Secondary

Certainly one of the biggest worries for Notre Dame fans coming out of the loss to Michigan was the performance of the secondary. Larz took a look at our man coverage technique near the goal line, but our zone defense was the culprit on a long first quarter touchdown to Jeremy Gallon. So what happened, and can it be fixed for the matchup against the Boilermakers? Let's take a look at the film: 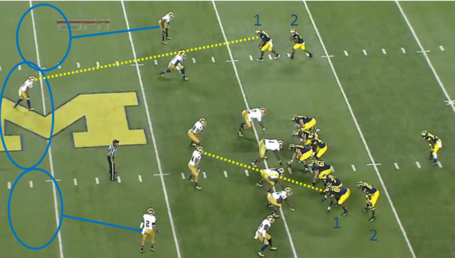 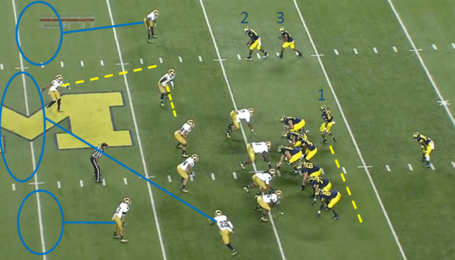 Immediately following the motion from Michigan, Notre Dame rolls its coverage towards the trips side, bringing Farley down closer to the LOS to play the field side flat, and giving Shumate the responsibility for the deep middle of the field. Since Shumate has vacated the boundary flat, now each linebacker's responsibility will shift as well. Calabrese will pick up the flat, and Fox and Smith are responsible for the deep middle. 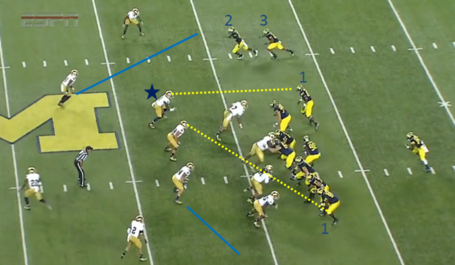 After the shift, it is important to note that Jaylon Smith is now the first defender to the inside on the trips side of the field. As the first defender, it is his job to read the release of the first threat, in this case the tight end. If the tight end releases upfield, his responsibility is to read run, then trail the TE up the seam, playing underneath the seam route, as shown below: 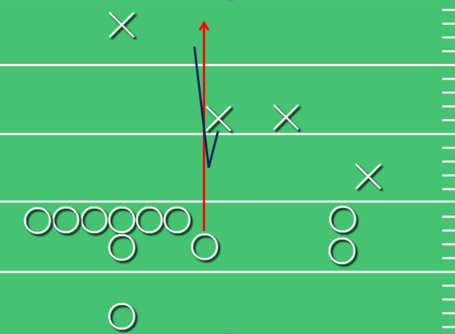 In the case of the play Michigan had called, Smith should have read the TE releasing to the flat and made a call to the flat defender (Farley) to pick up the TE. At that point, Smith should move to the next threat, and stay to the inside of the pattern. In this play, the ideal coverage would have been to trail Jeremy Gallon up to his break and settle under the in cut he was making, leaving KVR and Shumate to deal with the deep post. This pattern matching combination is shown below, where everyone makes the correct calls and coverages: 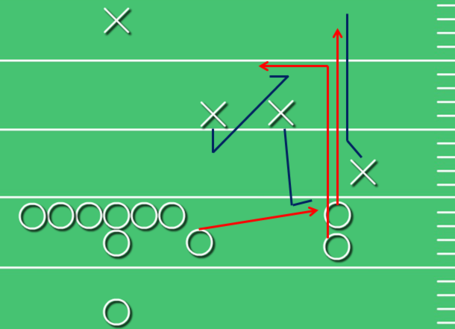 Of course, that's not quite what happened. Smith, despite bumping inside before the snap, stayed with his original flat assignment, being pulled down by the motion and flow of the play. Expecting a quick hit to the just-motioned TE, Smith was looking to make a play. In doing so, he left Farley and himself covering the same zone, with no one to settle under the in route of Jeremy Gallon. Add in a couple of (very) poor tackles, and Notre Dame found themselves down 10-0 to Michigan after 10 minutes of football.

A freshman linebacker making a mistake in coverage because he was trying to make a play is something that happens all the time on every college football field in the country. This type of mistake is precisely what Brian Kelly is talking about when he says that the Irish simply need to execute better. Diaco had a great playcall, had a check prepared for his defense to roll the coverage correctly, but one incorrect coverage and a blown tackle give up a huge chunk of yards and 7 points.

It will be interesting to see the secondary perform against both Purdue and Michigan State, two teams that shouldn't be able to capitalize on mistakes of execution as well as the Wolverines were able to. I expect to see a variety of coverages against the Boilermakers, both to confuse the quarterback, as well as put the test to the back end of our defense in the execution of all of our coverage schemes. Growing pains are fine, as long as we're growing -- Saturday is Notre Dame's chance to execute what it learned from the Michigan game, in a much less high pressure environment. Hopefully.