41 points and 460 yards of offense. Last year it would have taken teams 2 to 3 games to amass this level of production against the Irish defense. This year all it took was one game in the big house. Obviously, this is not the 2012 Notre Dame defense. Most assumed that with 8 returning starters, the 2013 defense would once again be formidable. In the early stages of the 2013 schedule the defense has looked anything but formidable. One of the primary reasons for this is that the secondary and front 7 appear to be out of sync. Let's go to the film room and I'll show you what I mean. 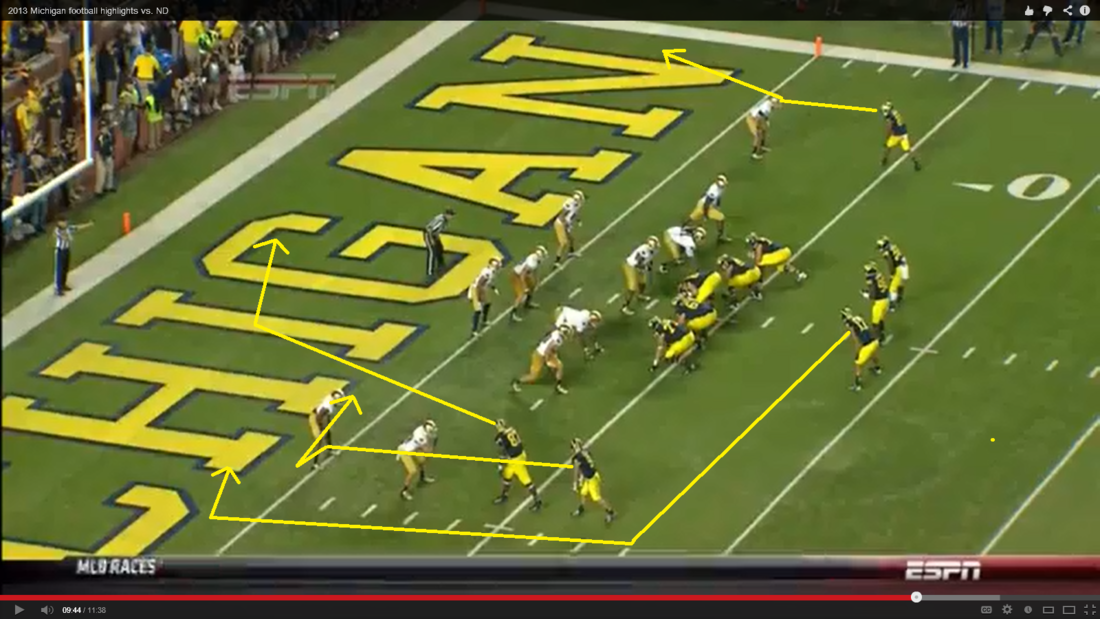 A little over 4 minutes left in the 4th quarter. Notre Dame has clawed their way back into the game and is only down by 4 points. After two pass interference calls the Irish are backed up and in a difficult situation. Even so, all hope is not lost. If the defense can hold Michigan to a field goal Notre Dame has a reasonable chance of tying this game up and heading to overtime.

Michigan knows that the Irish are going to blitz on this one. So they call a quick pass that is designed to attack the middle of the field. 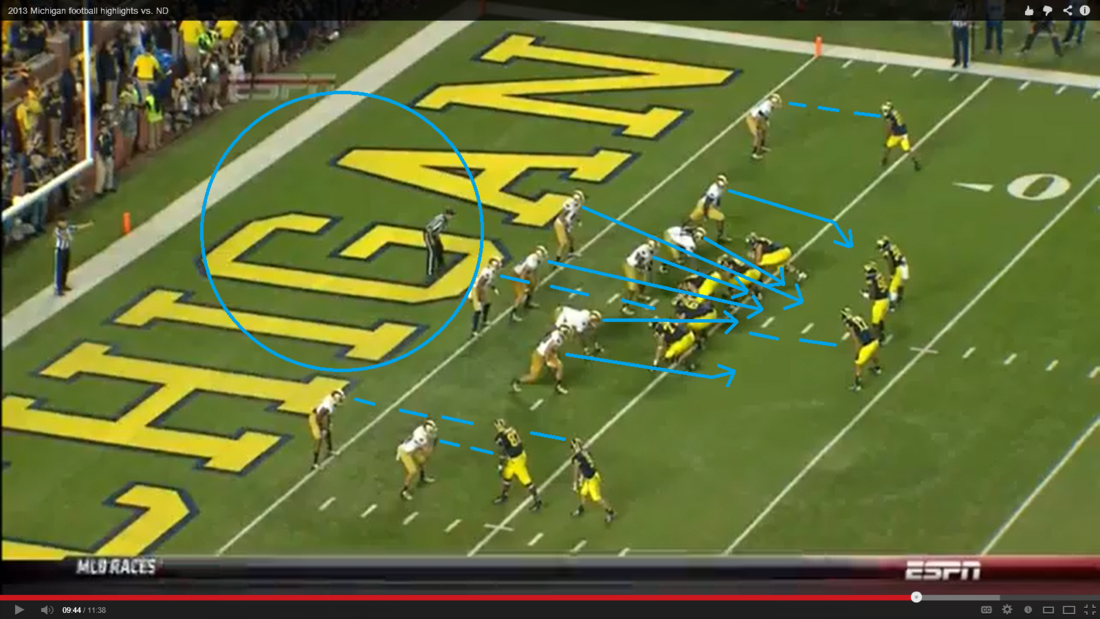 Notre Dame is sending the house and blitzes 4 linebackers. Technically Carlo Calabrese (# 44), comes on a delayed blitz. My guess is that he is responsible for covering the running back and when he sees him block, he blitzes. Regardless, an all out blitz like this means true man coverage with no help in the middle of the field (large blue circle). Notre Dame's defensive backs must understand this and take away the inside in their man coverage technique. They also must understand that they can be aggressive at the line of scrimmage because the front 7 will pressure the quarterback. Simple right? The front 7 applies pressure, the secondary is aggressive and takes away the inside, a defense in sync. 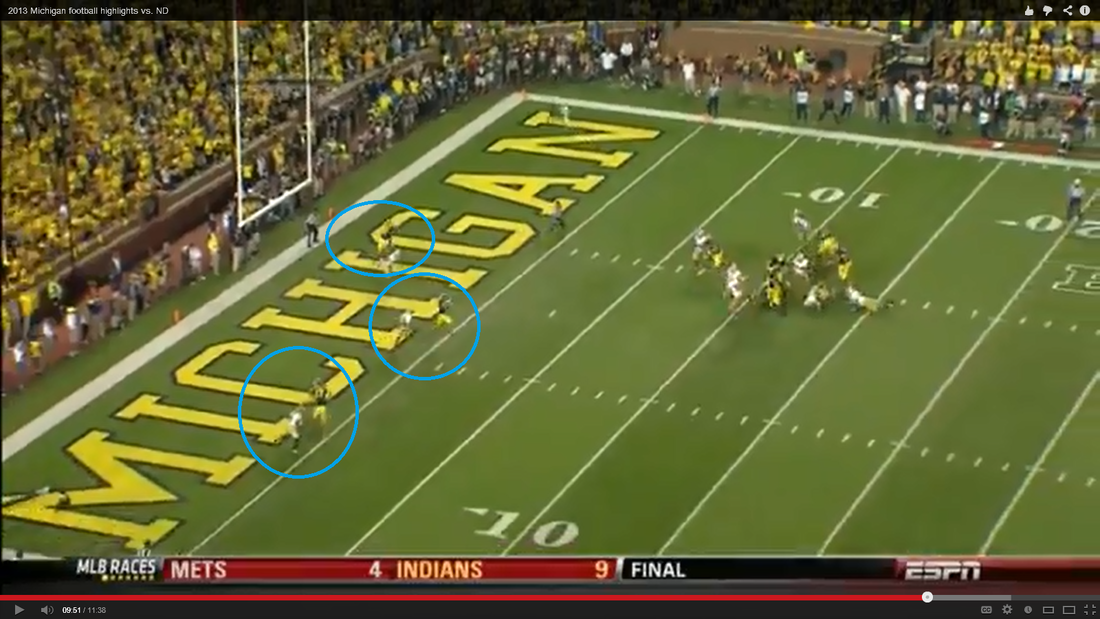 Post snap, 3 of the 4 Notre Dame defensive backs have been beat to the inside. When Brian Kelly emphasized the need to play smarter and more disciplined in his post game press conference this is exactly the type of thing he was talking about. As a defensive back you always take away the inside in this situation. Totally unacceptable. 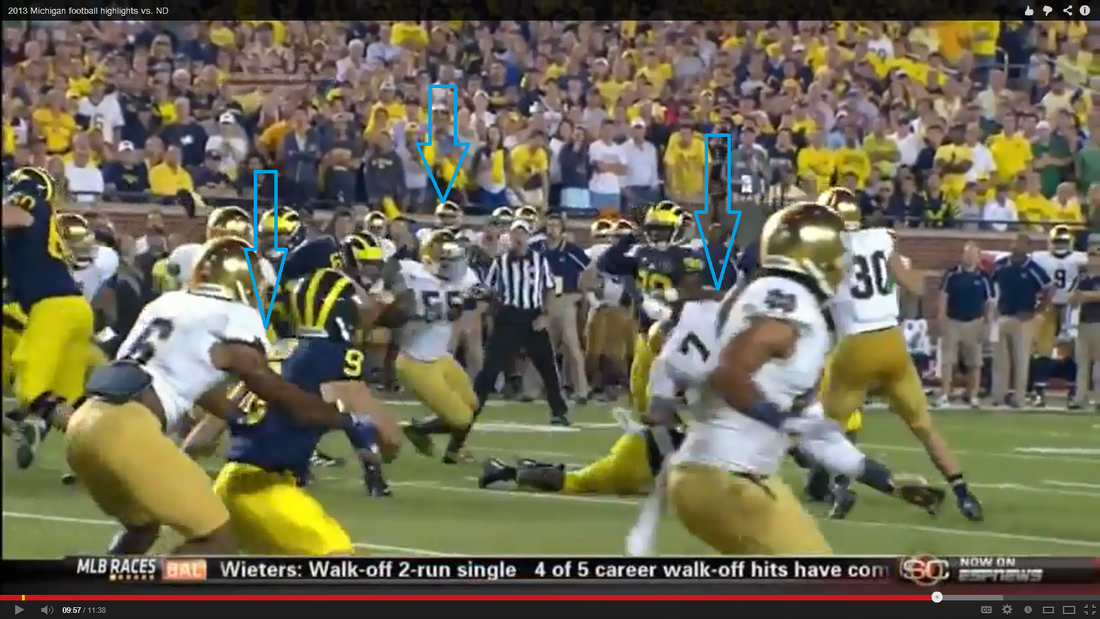 This close up demonstrates how the Notre Dame secondary and front 7 were slightly out of sync. If KeiVarae Russell (# 6) positions himself closer to the blue arrow, Gardner can't make a quick throw inside. This means Godzilla and Mothra (aka Stephon Tuitt # 7 & Prince Shembo # 55 - highlighted with blue arrows) have an extra split second to get to the quarterback. Instead, Russell is boxed out by the receiver and is about to get beat to the inside. Russell's technique isn't in sync with what the front 7 is doing. 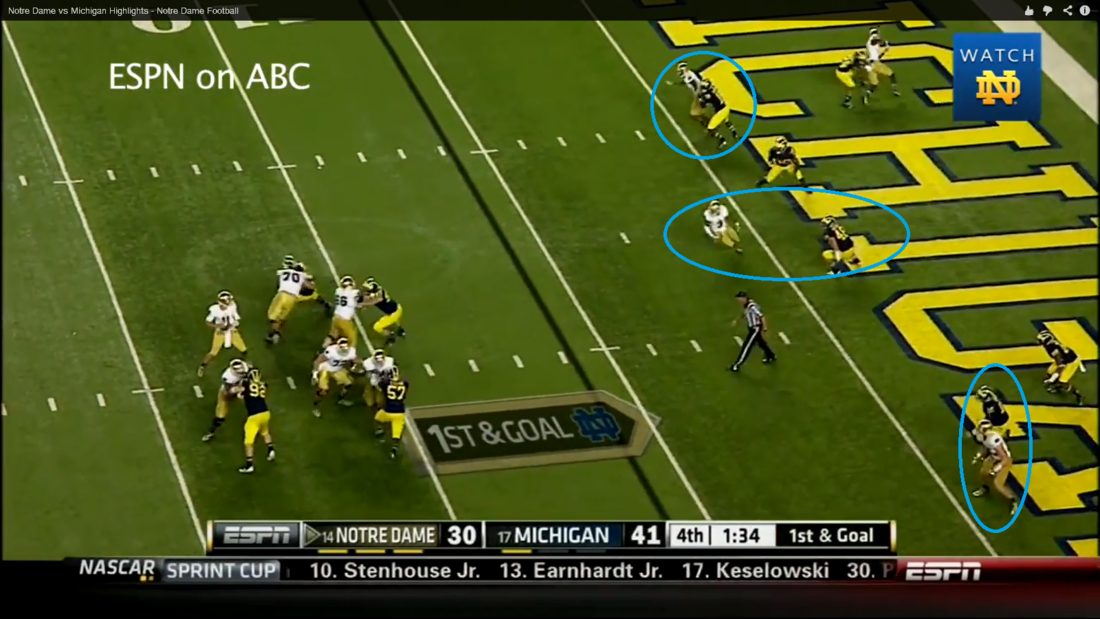 By contrast, the Wolverines provide an excellent example of what taking away the inside looks like. Admittedly Michigan is playing a different style of defense on this play (the linebackers dropped instead of blitzed), however the point remains. Michigan does a much better job of taking away the easy inside release with proper positioning. 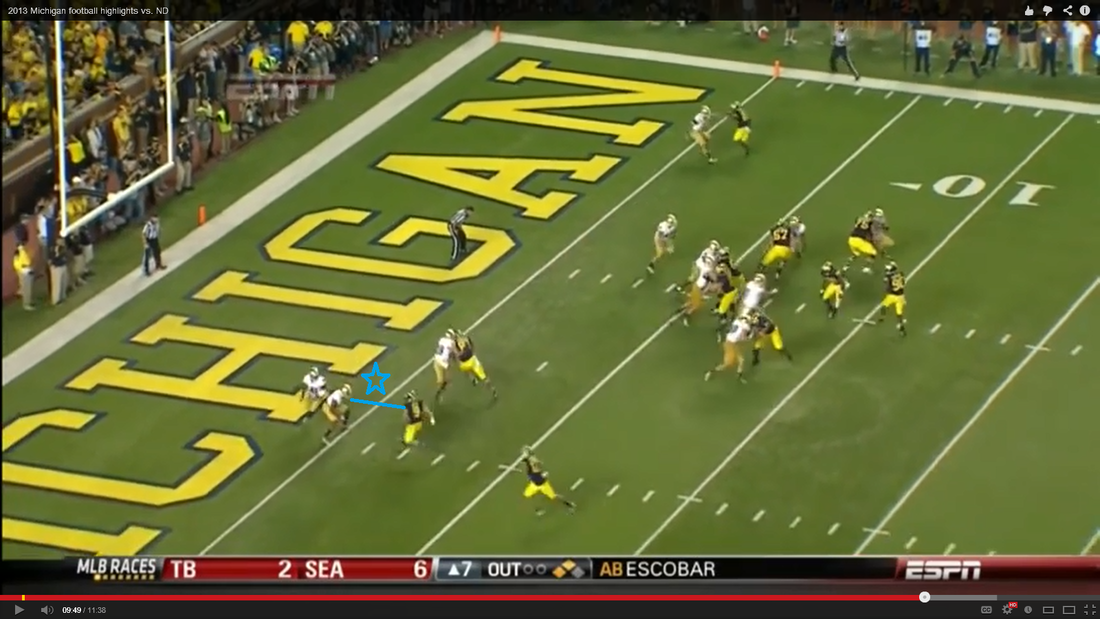 Let's take a closer look at the how the Michigan receivers are able to get inside so easily. This screen shot shows the technical error Russell made on this play. In a man coverage situation each player is trying to gain a tactical advantage at the start of the route. Generally speaking, defenders try to limit the receiver's options by taking away a side. In this case, Russell should be shaded to the inside, closer to the blue star. This positioning does two things. First, it takes away the easier inside throw (which is the hot read against this type of blitz). Second, it allows Russell to undercut any pattern to the outside.

KeiVarae Russell doesn't shade the receiver to the inside. He is at best head up and possibly a touch to the outside. This leaves him vulnerable to an outside fake and cut back inside, which Drew Dileo (# 9) executes flawlessly. Russell can't allow the receiver to get inside so easily in this situation. The best way to accomplish this is through better positioning. When you watch the video you'll see that pre-snap Austin Collinsworth (# 28) makes the same mistake and doesn't shade Devin Funchess (# 87) which allows him an easy inside release.

It's true Devin Gardner (# 98) makes a nice throw under considerable duress. Even so, this play is much more difficult for Michigan if 3 of the 4 Irish defenders simply take away the inside. It's not rocket science. All the linebackers are blitzing. The quarterback is going to be under pressure. He will go to the hot read (which is inside). Take this option away. Force him to hold onto the ball. Get in sync.

Last year the pieces of the Notre Dame defense complemented each other very well. The secondary was inexperienced and a potential liability so the defense was structured to protect the defensive backs. Notre Dame often used two deep safeties and relied on Manti Te'o to take care of short and medium passes over the middle. Te'o's presence meant that quarterbacks were reluctant to throw quick passes in the middle of the field. Therefore, they had to hold on to the ball longer. Which led to a more effective pass rush. This year the linebackers don't have the same range as Te'o, so the plan has changed. Instead of asking the linebackers to cover the middle of the field in passing situations, Notre Dame is blitzing them more frequently. With the linebackers blitzing, the secondary has the responsibility of taking away passes over the middle. So far, they haven't done a very good job with this responsibility. In fact, they've looked downright uncomfortable in man coverage. Right now, the front 7 is playing a style of defense that the secondary is unable to support. Thus, the defense is out of sync. Something needs to change to get the defense back on the same page and it needs to happen fast.