What can we expect from ND's newly installed pistol formation against the Owls in week one?

With much of the conversation in the offseason surrounding the installation of the pistol formation by Brian Kelly (and a visit from Pistol visionary Chris Ault), I thought it would be worthwhile to take a look at what plays we can expect to see on Saturday out of the pistol formation. Since it should be a pretty vanilla gameplan, any plays we see out of the pistol will undoubtedly be of the bread-and-butter variety. I truly expect to see the standard plays we've grown used to over the past few seasons, just from the new formation.

Why the pistol formation instead of the shotgun or the singleback Ace formation?

Pistol tends to offer the best of both worlds. It offers the QB the same dropback safety and time that the shotgun formation provides, along with giving him a wider view of the field at large. When the QB isn't worried about his dropback steps, he can focus his brain power on efficiently reading and dissecting a defense. It does lose out to the Ace formation on the play action potential, but it is much better than the shotgun formation at selling a play action fake. The pistol offers the RB a downhill start into the line (useful for GAIII, according to Larz), taking away the biggest downside of running out of the shotgun, the essentially "standing start" that is required for most inside runs. There is an argument to be made that putting the QB directly in front of the RB hinders the RB's initial vision, which puts a lot of pressure on the QB to be able to read defensive fronts to see if he needs to check out of a running play or flip the direction.

The downsides to the pistol when compared to the shotgun are usually melted away by one simple advantage which the pistol has. When you line up in the pistol, you declare nothing about the play's likely direction. Sure, there are ways in the shotgun to counteract this (most effective being the zone read), but why reinvent the wheel when you can simply run your normal plays with the benefits of the shotgun package as well? Especially in the case where you have a non-mobile QB and cannot utilize the zone read as effectively as possible, the pistol provides a great alternative to the shotgun to ensure the running game is still successful.

Here are the plays I expect to be our "core" package from the pistol, and the most likely plays we will be seeing from the formation on Saturday against Temple

These two running plays are most spread offenses' core plays (except weird man blocking spread teams, usually airraid). Essentially, these plays utilize zone blocking techniques, and allow the RB to pick his hole, make ONE CUT, and get upfield. These plays are run out of most any formation, and are arguably more effective from the pistol than from the shotgun since the formation doesn't give away directionality and the RB is able to get downhill much faster. On the outside zone, there is a much quicker and more effective counter action as well, something that is hard to replicate from the shotgun. 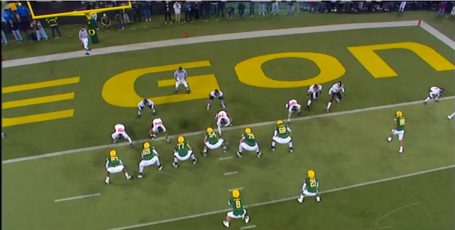 You see in this screenshot that the defense knows they need to be aware of an inside zone, or an outside zone to the left. They are (for the most part) able to completely cross off one half of the field to running back handoffs. If an outside zone is called here, and they were going to run into the teeth of the defense, in order to flip the run, the RB would have to move to the other side of the QB, tipping the play to the defense.

Note on the inside zone below the "slow start" that the RB has at the time he receives the handoff -- certainly not advantageous to hit the line at full speed when you only have one step before the handoff, and it's not straight at the line.

RG3 and the Redskins were really the impetus for the Pistol catching on in the NFL this past season. Combined with Mike Shanahan's classic zone blocking scheme, it really emphasized the team's strengths (and RG3's experience with the formation at Baylor). You see in this screenshot (taken just before a zone play) that the defense needs to respect a run to any part of the field. They cannot shade to a certain side with knowledge they would have received if the RB had been in shotgun formation: 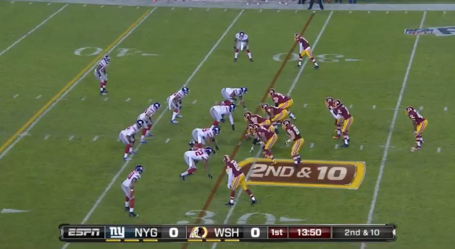 In the zone play below, you see just how quickly Alfred Morris is moving at the time he receives the ball. Compared to the Oregon play, he has already taken two full steps to get up to speed where the Oregon back has taken just one, giving him more speed toward the line while also having additional time to read his blockers.

The Power-O play is a staple of I-Form MANBALL teams everywhere, and CBK has re-appropriated it for use in the 'smashmouth'-spread which he has been building at Notre Dame. The pistol formation, given its similarity to the I-formation, is a perfect formation to mimic the classic Power-O play from. With Notre Dame's offensive line this year being so strong on the left side, I would expect to see a healthy dose of Christian Lombard pulling from his right guard position to lead our running backs through the 3 hole on the left side of the offensive line.

The other part of the Power-O play that is so devastating is the play action looks you can generate from it. This is where using it from the pistol (remember, it's better than the gun at play action) is so effective. The guard motion freezes the LBs (who's keys almost always include the guards), and opens things up downfield. The pistol formation also allows the RB to have a better read of blitz pickup, allowing the QB to have more time to setup to throw downfield.

In the below play, you can see a balanced formation from Texas, one of the hallmarks of the pistol being a hit-anywhere type of run game. As the ball is snapped, the right guard takes one drop step and works across the back of the line towards the 3 gap, which he will lead the RB through. The left side of the line downblocks, leaving one lineman free to get to the second level. The pulling guard is responsible for the second backer in the hole, and opened up a great hole. Unfortunately, in this play, the RB doesn't follow his blocker through the hole and cuts it up too soon, giving up several yards.

In the next play we can see the "power" of the play action from a Power-O look. Here, the H-back serves as the "motion" blocker that would otherwise be represented by the pulling guard in a Power-O play action pass. You immediately see a great play action fake (aided by the QB being able to make a full hide-the-ball fake thanks to the pistol). Along with the H-back in motion to "block", this makes all 3 linebackers (and the strong safety & corner) bite extremely hard on the playaction:

All that's left for the QB is an easy pitch and catch to a wide open receiver, thanks to a run fake sold thanks, in part, to the pistol formation.

Ostensibly, the most well-known set of plays out of the pistol are the read-option and triple-option looks. Hell, there's a reason people called it a pistol "offense" and not just another formation while Nevada was running it. I fully expect Notre Dame to use the pistol formation similar to how it has been used in the NFL as well as at the college level, with option concepts worked in. Yes, even with Tommy Rees in the game.

According to Chuck Martin, the Irish won't hesitate to call option runs with Rees this year, which I think they will most likely utilize as a red zone wrinkle. One of my favorite plays from last year was the speed option we tended to run on third and short situations. I foresee this being an often used play out of the pistol. Add in the fact that we can run it to either side of the field with no problem (as opposed to shotgun), and I think we can be effective enough with Rees running the ball to keep this play on our playsheets.

I also fully expect to see option from the modified "diamond" pistol formation in goal line situations (much to Murtaugh's delight). Adding in the extra lead blockers and potential option recipients is exactly what the doctor ordered to be able to punch the ball into the end zone with more regularity this season. I believe Andrew Hendrix, when he does see game time, will see it in the diamond and pistol formations almost exclusively.

I'm not going to go in depth breaking down each zone read from the GIFs below (a post for another time with a more mobile QB), but I fully expect to see each of these reads in ND's playbook from the pistol:

Finally, the new hotness at every level of football is packaged play concepts. This is something we have already seen from Kelly & Co., and I expect to see it worked into the new pistol formation as well. With Rees's limited mobility, I expect the staff to use packaged plays to ensure the ball makes it to the right spot with greater efficiency. I believe these plays will be less featured/important versus Temple, but it is something to keep an eye out for as the pistol formation takes shape this season.

The pistol formation is going to be a great weapon for the Irish this season, a formation which plays right into our personnel as a powerful spread team. I expect to see the above plays from the Irish out of the pistol early and often, throughout the season. It will be interesting as the season grinds on to see what other wrinkles CBK works in on top of these go-to plays.

Any questions on the Pistol formation, or any X's and O's aspect of ND v Temple should definitely go in the comments below. Articles are never long enough to get all the X's and O's love out there!!