OFD Films: The Game Within the Game - Jamming the Receiver

Synchronicity and simplicity wrapped in complexity

Share All sharing options for: OFD Films: The Game Within the Game - Jamming the Receiver

Synchronicity. The English rock band the Police had it. College offenses want it and college defenses want to destroy it. The sophisticated passing attacks we see in college football today require precise timing to be effective. With every breath they take quarterbacks and receivers endeavour to achieve a perfect state of synchronicity. Lurking in the shadows however, are defenders whose primary mission is to leave offenses in a maddening state of asynchrony.

Okay, well maybe that's a little bit of hyperbole. The point stands though. The passing game thrives on timing. Defenses know this and want to disrupt this timing. The most celebrated way to do this is to pressure the quarterback. The idea is pretty simple. If you tackle the quarterback before he throws, or force him to throw before he's ready, you'll upset the delicate balance required in the passing game. Another common way to disrupt the timing of the passing game is to disguise coverages. This forces the quarterback to take more time deciphering what the defense is doing post-snap, which means he may have to hold onto the ball for longer than expected. In this edition of the game within the game we'll take a look at a lesser known, but equally effective example of disrupting the passing game called jamming the receiver.

For those of you not familiar with football jargon, jamming the receiver refers to a technique where the defender hits a receiver as he runs his pass pattern. This forces the receiver off his intended path which means the receiver takes longer to get to the location where he should be catching the ball. This disrupts the timing between quarterback and receiver which makes it more difficult to execute the play. 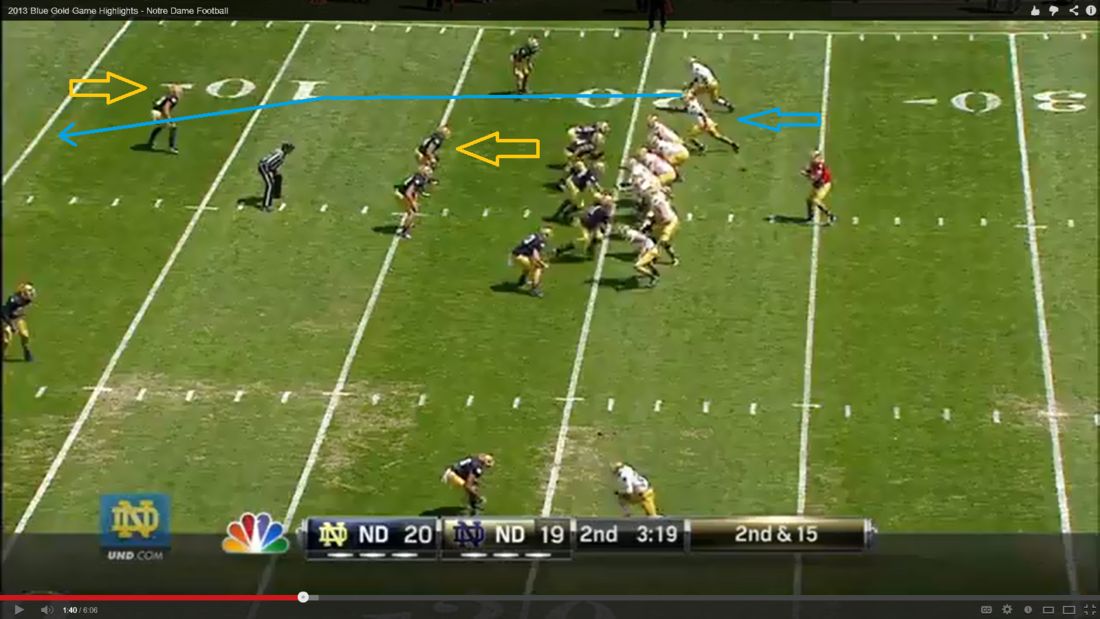 George Atkinson III (# 4) is in the slot and about to run a post pattern. Atkinson will try to run vertically up the seam outside of Carlo Calabrese (# 44) and then somewhere around the 10 yard line make a hard cut to get inside of Matthias Farley (# 41) . 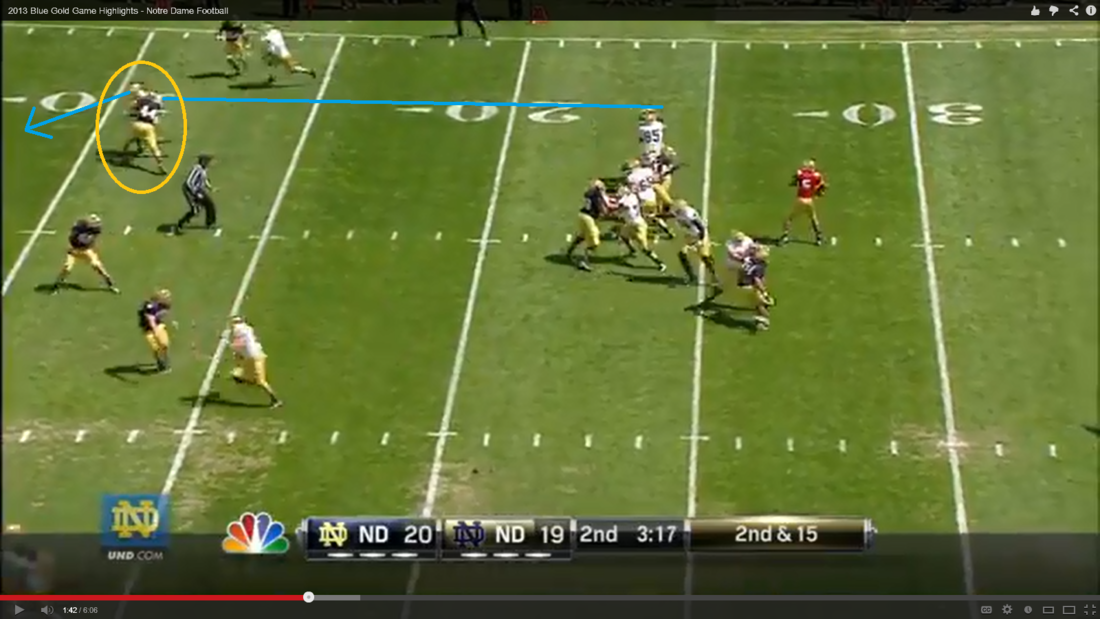 Carlo Calabrese is in the process of jamming GA III. What he is trying to do is throw Atkinson's timing off and make it more difficult for him to cut inside to the post (shown by the blue arrow). 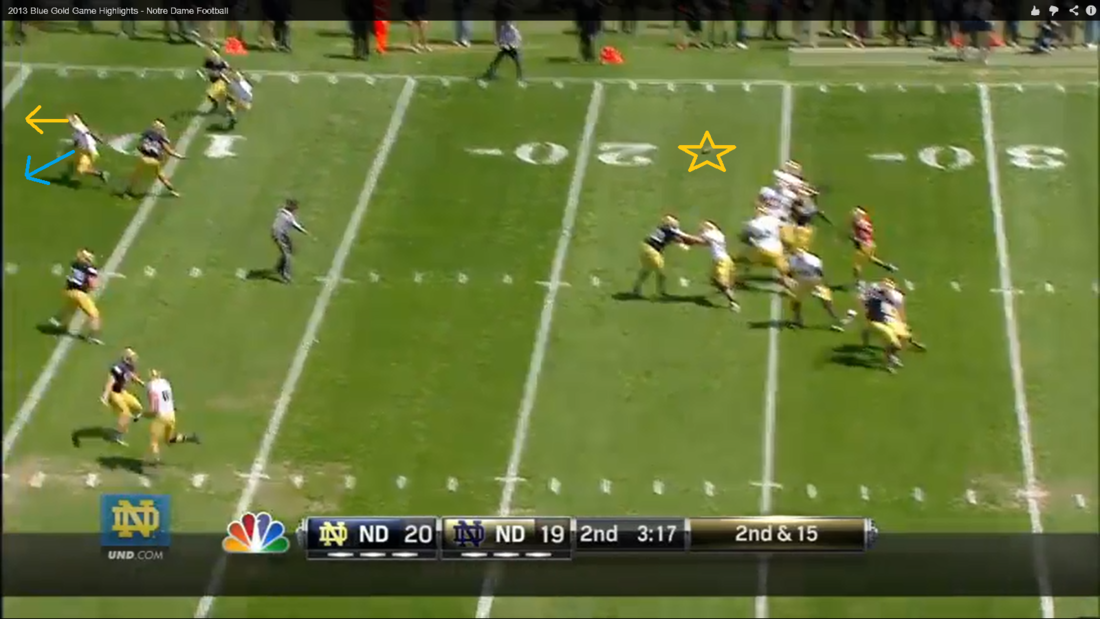 This is a millisecond after the jam by Calabrese. GA III should be heading in the direction of the blue arrow. Instead he is struggling to keep his balance and is heading in the direction of the gold arrow. Notice the ball is already in the air. On this type of throw the quarterback has to anticipate when the inside cut will happen and throw the ball before it happens. Quarterbacks and receivers spend hours perfecting this timing and then Carlo (and his people) come along and mess things up. 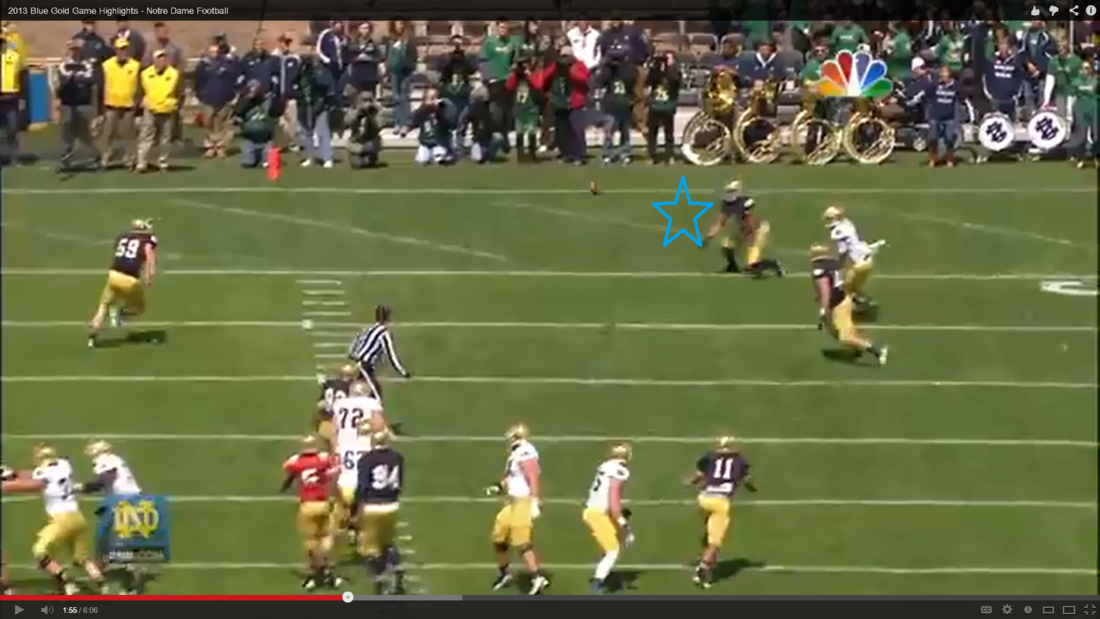 Atkinson should be where the blue star is, but because of the jam from Calabrese he is a couple of steps late. This has allowed Matthais Farley to get into perfect position to make a play on the ball and come up with the interception.

The second play provides us with an excellent example of what happens when the defense doesn't jam the receiver. 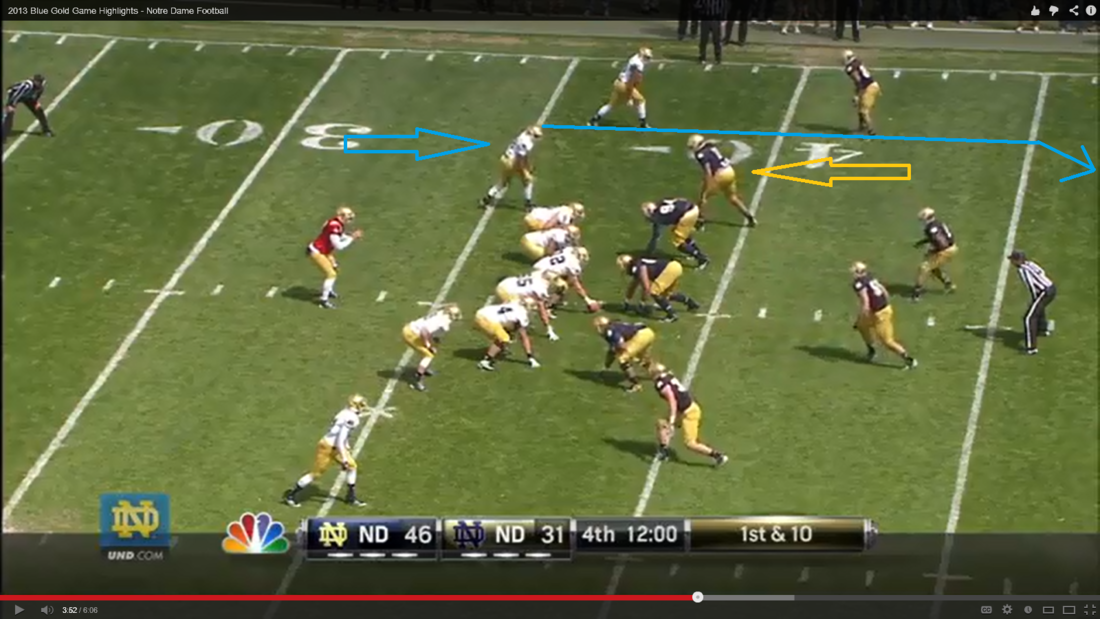 We see a similar formation to the first play. This time we have running back Will Mahone (#32) in the slot. He is looking to run up the seam outside of Ishaq Williams (#11) and break to the inside on a post pattern. Very similar to the route GA III was going to run. 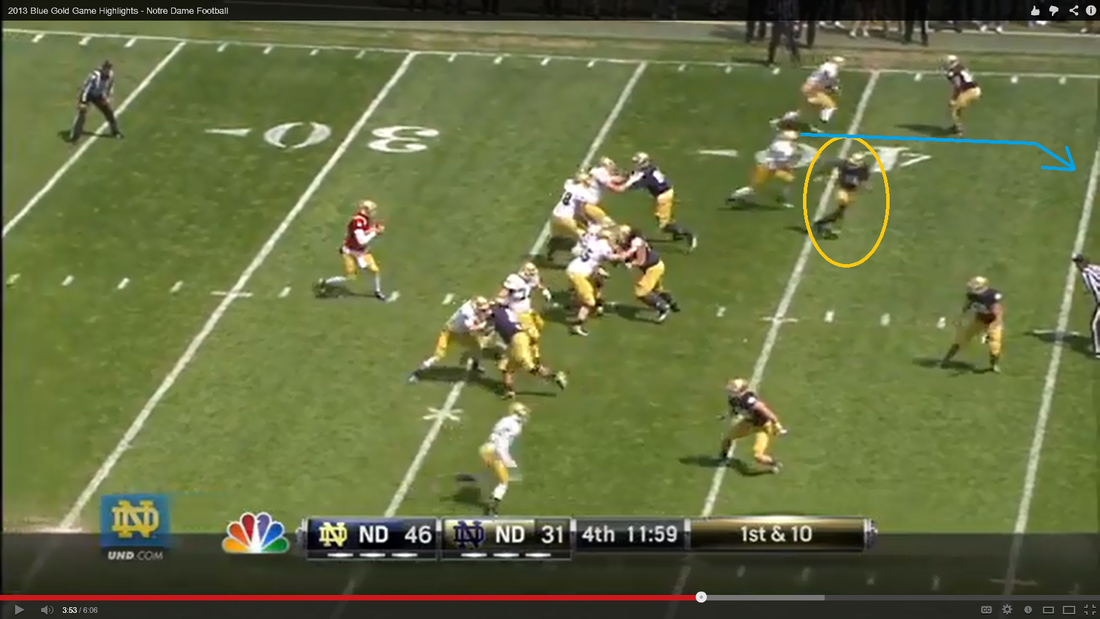 For some reason all the linebackers open to the wide side of the field on their pass drops. This means that Ishaq Williams turns away from Mahone and therefore can't jam him. I have no idea why Williams would turn inside like that. I'm assuming this is a mental error. If this is the way this defense is designed the Irish should tear that page out of the playbook. As you will see, when the receiver is allowed to run free up the seam it creates all kinds of problems for the defense. 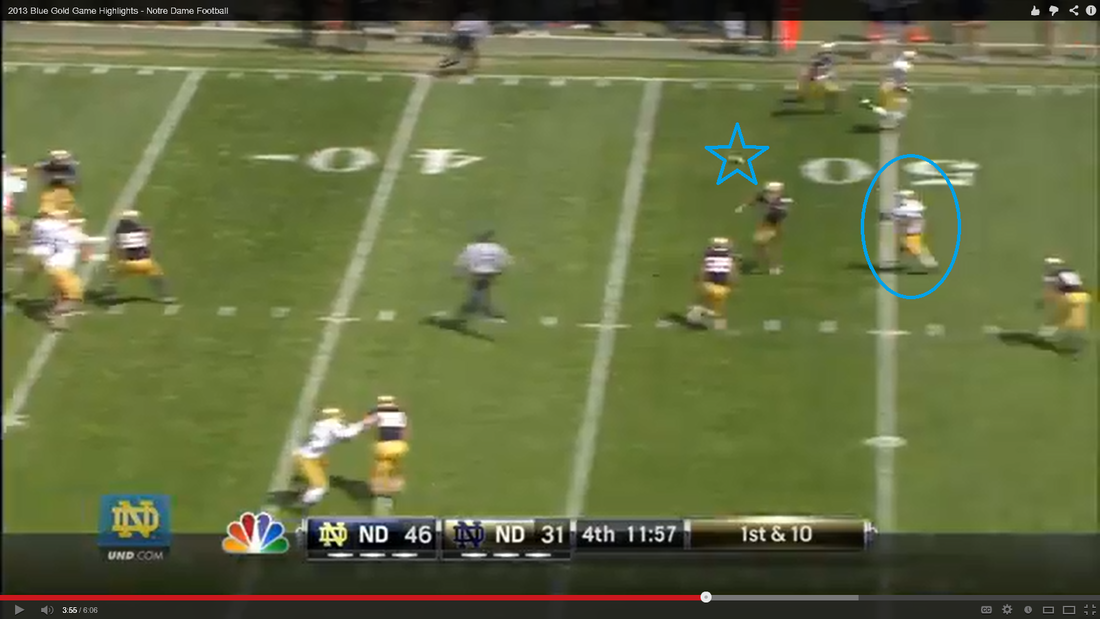 The ball is just about to arrive at the exact moment when the receiver comes open. This is what happens when the defense doesn't disrupt the timing of the offense. 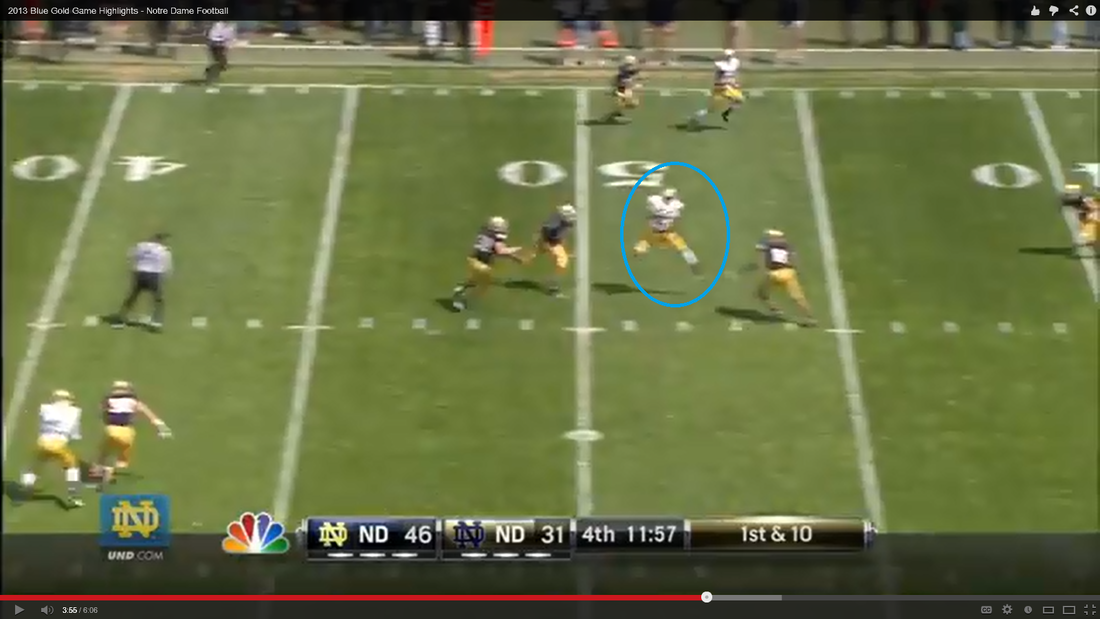 Bingo. The catch is made and Mahone is off to the races. Even though there was a very tight window with three Notre Dame defenders in close proximity this is easy pickings for the offense. It's pretty clear that if Notre Dame had jammed Mahone and put him even a step or two behind, this play wouldn't have been a success for the offense.

So there you have it, a quick jam or lack thereof by a defender makes all the difference between an interception and a big gain by the offense. Synchronicity, some want to achieve it, others want to destroy it. What a beautiful game football is, simplicity wrapped in layers of complexity.