If You Could Change the Course of Notre Dame Football History

If you could go back in Notre Dame football history and undo one thing, what would it be and what would you do instead?

Share All sharing options for: If You Could Change the Course of Notre Dame Football History

Last week, the writers at Good Bull Hunting, SB Nation's home for Texas A&M football, proposed and answered a compelling question: "What would you undo in Aggie football history?" We wanted to bring that question, cast in Fighting Irish terms, to OFD.

Here it is, then:

If you could go back in Notre Dame football history and undo one thing, what would it be and what would you do instead?

A few possible choice mulligans are sure to come to mind:

1. 1987: Father Edward "Monk" Malloy is not inaugurated as Notre Dame's 16th President. Father Hesburgh's successor provides more effective oversight in hiring decisions and in the promotion of, investment in, and university-wide support of the football program. (Eric Murtaugh has more on the debated but defining impact of Malloy's appointment in last summer's "30 Defining Moments" piece here.)

2. 1993: Boston College's David Gordon misses the last-second field goal that robs the no. 1 Irish of a chance for a ninth national title overall and a second national title under Lou Holtz.

3. 2004: Charlie Weis does not get hired as the head football coach at Notre Dame. We escape the darkest timeline. (Who becomes coach instead? Does it really matter? Tom Clements? Greg Blache?)

4. 2007 (a proposal from our own Whiskey): Charlie Weis does not start Demetrius Jones against Georgia Tech in the opener. The Georgia Tech defense (in fact aided by two Jones fumbles) does not stymie the Weis attack and hold the Irish to a late field goal. Weis does not consequently fall in love with Jon Tenuta and hire him that offseason. The ND defense does not officially turn grab-bag at that point. The Fighting Irish defense is substantially better in 2008 and 2009 because of it. Would Notre Dame have held on to their erstwhile head coach into 2010 and beyond? What, then, of Brian Kelly?

5a. 2011: Ohio State AD Gene Smith imposes a bowl ban on his university's football program for the 2011 post-season, freeing them to compete in the national championship game against Notre Dame in 2012.

5b. 2012: With 51 seconds remaining in the fourth quarter of the 2012 Alabama-LSU showdown, A.J. McCarron's pass to T.J. Yeldon falls incomplete on 2nd and 10 from the LSU 28; Alabama fails to score on the drive and LSU wins, 17-14. Alabama finishes the season with two losses and Notre Dame faces a different opponent in the championship game (likely LSU or Georgia, possibly Oregon or Kansas State) and maybe - just maybe - claims the victory. (We could do this again with Georgia-Alabama and 1:08 to go in the SEC championship game - you get the idea.) 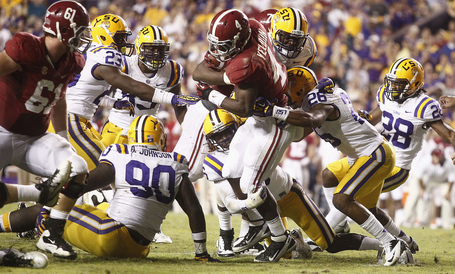 These are all from within the modern era of Notre Dame football, in part because (1) the further back you go, the deeper and less predictably the ripples spread out from the changed moment, and (2) in part because we, as modern-era fans, would have experienced (and enjoyed) these changes to recent history in their full force. The historically-minded among us, though, could surely defend a change much further back in the Fighting Irish timeline.

Cast your vote and hit the comment section to make the case for the wrench you would gladly throw into Notre Dame football history.