After a rough start to her rookie campaign, Skylar Diggins will have to turn it around on the court before the league seriously gains from her presence.

Share All sharing options for: Skylar Diggins & Transforming the WNBA

Skylar Diggins may be the most transformative athlete in recent Notre Dame history. Certainly following the disappointment of the BCS National Title Game and Manti Te'o's, ahem, personal problems you could make the case that there's been no bigger or more important athlete to wear the blue and gold this century than Skylar Diggins.

Although she wasn't quite as decorated as Ruth Riley and didn't carry Notre Dame to a national title Diggins was a more marketable star boosting attendance past the men's Irish team and creating a buzz on campus that had never existed around the women's program in the past. Going 129-20 over a 4-year span and reaching 3 straight Final Fours, as Notre Dame did from 2009-2012, is also quite impressive in its own right too and clearly helped raise Diggins' status across the country.

As Diggins made the transition from the college to pro game there was little doubt that she would be an instant superstar---a marketing agencies' dream client with the power to redefine professional women's basketball and bring a level of popularity to the sport that hasn't existed since the WNBA was founded in 1997. In fact, just 18 days after her last game in a Notre Dame uniform Diggins became the 2nd athlete of either sex to sign with Roc Nation---the marketing wing of Creative Artists Agency led by rapper and business mogul Jay-Z. 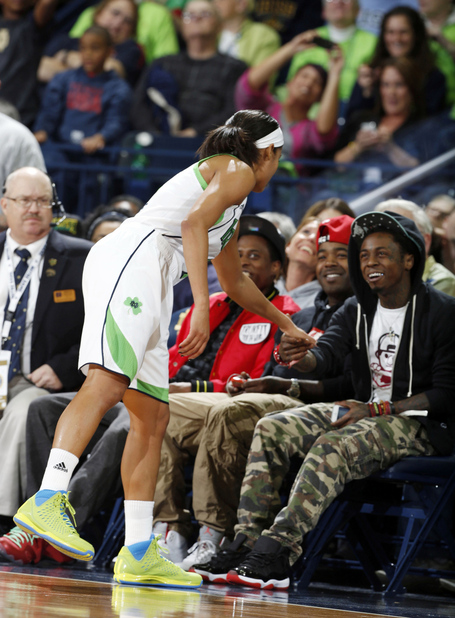 In last month's WNBA Draft the Chicago Sky made a mildly surprising decision by not selecting Skylar Diggins with the 2nd overall pick and instead opted for 6'5" forward Elena Delle Donne out of the University of Delaware. As expected the Phoenix Mercury took 6'8" Baylor center Brittney Griner with the 1st overall pick.

This move was met by plenty of head scratching and even some vitriol---especially from Irish fans---as the Sky had an opportunity to bring the marketing goldmine that is Diggins to the 10 million residents of metro Chicago and just 90 minutes from the Notre Dame campus and Skylar's hometown.

Many Notre Dame fans were not happy with this decision as Skylar Diggins playing pro ball in Chicago seemed like a match made in heaven or right out of a Hollywood script.

Yet, did the Sky really mess up with the pick? Is it possible that picking Delle Donne is better for Chicago and sending Diggins to Tulsa will actually be better for Skylar's long-term success?

It may seem counter-intuitive but did Chicago really want to have Sky on the Sky? Is that a marketing goldmine or would it be corny and worthy of constant eye-rolling (especially from other WNBA players) within a few months of advertising?

Further, I am sure the Chicago Sky understood the limits on team revenue with only 17 home games per season plus the financial backing of the NBA as a safety net. Let's face it, Sky owner Michael Alter isn't looking at any significant revenue from his WNBA team in comparison to his real estate development company. If they thought Delle Donne was the better player, money really isn't as huge of a concern as it would be in other pro sports leagues, and Chicago might bring too many distractions for Diggins---can you fault them for the draft pick?

Additionally, as much emphasis that is put on marketing and growing the WNBA the proof still has to be in the pudding on the court for Skylar Diggins if these grandiose plans are to come to fruition. Mia Hamm was incredibly popular and did a ton for the game of soccer in the United States for many reasons, the most important being that she scored more international goals than anyone in history. In her prime, Hamm was the best soccer player in the world.

Right now, Skylar Diggins is struggling on the court as a rookie while Elena Delle Donne and Brittney Griner are not. Griner has already doubled the amount of dunks in WNBA history and long-term could be a Wilt Chamberlain-type of player given her size and scoring ability. Delle Donne is a matchup nightmare as someone who is 6'5" and can move and shoot from long distance. Through 3 games she's averaging 19.0 PPG, 2 BPG, and is 6 for 8 from downtown.

Diggins and the Tulsa Shock fell to 0-4 on the season as Skylar is averaging 9.8 points, 4.8 assists, 4.2 turnovers, while shooting 26.5% from the field, and 22.2% from downtown. It's incredibly early in Diggins' career no doubt but there will be no team or league revolution, monetary or otherwise, with stats like that.

If her mere presence is supposed to boost attendance that hasn't been felt yet as the Shock welcomed 5,280 to their lone preseason home game and 7,381 to their regular season home opener after 7,509 showed up to last year's opener. Even with 8 bus loads of Notre Dame fans coming to Diggins' game on Sunday against the Sky the game was watched by 6,811 fans---Chicago saw 6,607 for their 2013 home opener and 6,198 fans for their 2012 home opener.

What's been lost in the incredible pride that Irish fans have for Skylar is that any transformation of the WNBA won't be done by a single basketball player. If it's going to happen it will be by a collection of young stars similar to Jordan, Bird, and Magic in the 1980's for the NBA. The women's sport is so far down the ladder in American consciousness that it is pretty presumptuous to believe Diggins alone would carry a revolution. 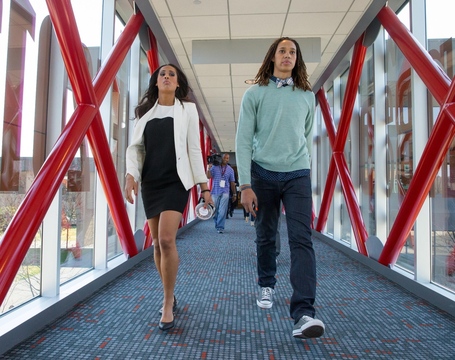 Now, Skylar may end up being the face of that growth someday but she's in quite a peculiar situation. Certainly she has a ton of basketball talent but most experts would conclude the rookies taken ahead of her have the ability to be more dominant franchise players. A 5'9" guard isn't unusual in the women's game but a 6'5" forward with range and a 6'8" center who can dunk certainly are.

This may be Diggins' cross to bear for the future---she has more off-the-court potential than maybe any player ever but 2 members of her own draft class have more on-the-court potential, and maybe a lot more. How Diggins handles this duo on the hardwood (and fights off any potential media backlash) will do more for her ability to grow the sport in comparison to some national television advertising spots she's bound to film. As a trio they did pretty well over Memorial Day weekend as a Washington at Tulsa game brought in a 0.3 rating while the Chicago at Phoenix game that followed brought in a 0.4 rating---the latter contest being the most viewed WNBA game on ESPN2 since July 4, 2004. So that's positive news.

That's why not being drafted by Chicago is just fine. There will be less distractions and if Skylar Diggins really is the burning superstar many see her becoming it will matter little where she plays. In fact, not being buried among the giant Chicago sports scene and building something more organic 90 minutes down the road from Kevin Durant and the Thunder, being THE STAR in a smaller pond, and growing as a pro away from the Notre Dame sphere of influence might be preferable anyway. Skylar is already playing in front of bigger crowds on average in Tulsa than she would be in Chicago anyway.

Diggins first few games in the WNBA have been forgettable but her career will be long enough for many happy chapters to be written. Endorsements are going to come rolling in and like many WNBA players she'll likely earn significantly more overseas playing in a foreign league. Money will not be an issue but becoming a dominant basketball player at the highest level needs to be priority No. 1 for Diggins moving forward. Sticking things out in Tulsa, turning the Shock around in to winners, and making it her team may not be easy but it will increase her popularity and make her a better basketball player.