Critiquing George Atkinson's running style and what he needs to improve on in 2013.

Last week Larz looked at Irish running back George Atkinson III and how at 6'1" 210 pounds he needs to learn how to lower his pads or risk being decleated on a regular basis running between the tackles. Today, we look at some other areas of improvement for the enigmatic GA3.

We know Atkinson is really, really fast. We also know he's big for a running back but not very physical. That's why there's been so much emphasis on Atkinson lowering his pads and learning how to become a tough runner required of any starting tailback at this level. While that's true he also needs to work on many other finer points of running in order to improve his all-around game and most especially to take full advantage of his speed.

Let's take a look at some runs by Atkinson and how he needs to improve his footwork, cutting ability, and decisiveness.

Here is GA3 getting to the edge and using his signature 'Stop & Shove' move that he likes to resort to when he's cornered by a defender. This is an acceptable move---particularly if you're near the goal line and just need a couple more yards---but Atkinson uses it far too often and it zaps his best asset which is speed.

Watch how he decelerates when he sees the defender. 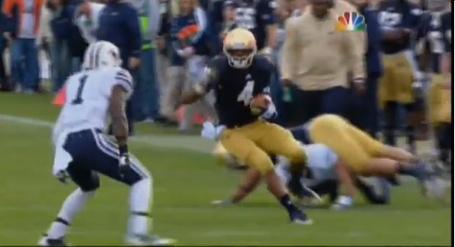 Here's GA3 with his right foot planted as he approaches the BYU defender. He's moving so fast at this moment that if he uses that plant foot to cut up-field he likely would have beaten the defender and possibly even scored a long touchdown. Instead he powers down, taps his feet three times, and tries to jump-cut past the tackler with almost no momentum. 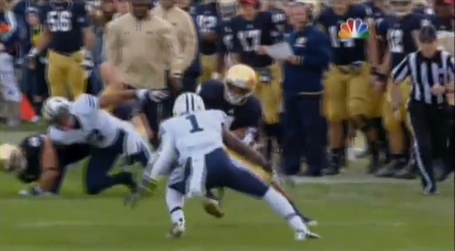 Here is GA3 after he stutters his feet and he's about to jump-cut off his left leg. Ideally, this tackler would be trying to stop Atkinson with one arm and against the grain after GA3 cut up-field but instead he's in perfect position to get a good piece of him. End result, Atkinson slowed down so much he's tackled by an oncoming linebacker for a couple yards gain after the initial tackler got a good piece of him.

The first video is Atkinson from the 2012 Blue Gold Game running an outside zone and once again showcases his lack of a decisive cut up-field. There isn't great blocking on this play but an athlete like GA3 severely reduces his threat as a playmaker by not planting his foot and getting up-field. 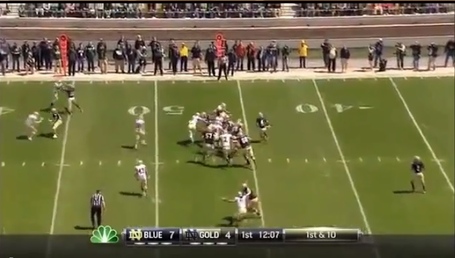 Right at the 44-yard line look how Atkinson shuffles his feet again to make his cut. That's a good way for a fast player to become slow and miss that split-second hole that might have opened up.

Watch in the second video how Riddick and then Wood make strong and decisive cuts against Miami. They aren't even particularly impressive runs but they highlight how shifting east/west to north should be done.

The third video is Atkinson trying to get the edge this past season against Stanford. Do you notice what he does once he realizes there are defenders in his way? Yup, stutters his feet to try and change direction. 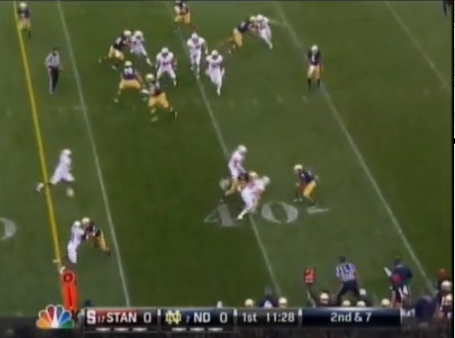 Look at the above screen shot. See how his stuttering has made him so easy to tackle? He's literally stopped running and in no position to explode forward with his feet so close together. Although he's athletic and strong enough to shrug off the first tackler he's easy prey for the oncoming safety.

The fourth video is from T.J. Yeldon's first career game this past fall against Michigan. Notice how at the 32-yard line he makes one cut and shoots up-field without stuttering his feet or losing speed? There's a fluidity there that Atkinson really struggles with. One instant Yeldon's hips are facing the referee on the sideline and then next instant he's crossed his legs over and his hips are facing north bursting through the hole.

This video highlights the big reason why Atkinson struggled so much as a kick returner during his second season at Notre Dame. Poor blocking for sure but the returner has to make the first guy miss and once again GA3 resorts to his stuttering to juke technique and ends up paying the price.

Back to the 2012 Blue Gold Game and Atkinson takes a handoff and doesn't like what he sees to his left. So he tries to cut back, but instead of planting his foot against the grain or making a quick jump-cut he decelerates again. 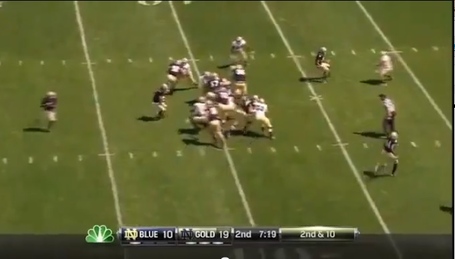 Here is Atkinson right before Ishaq is going to stand him up in the backfield. GA3---moments earlier taking a hand-off and running down hill---is literally standing still and a huge target to be tackled.

All is not lost for Atkinson because he has shown the ability to run with proper technique in the past. If you remember, he actually shook off the above tackle from Ishaq during the '12 spring game and continued running down field. After zipping right past a defender who wasn't prepared for his speed GA3 gets tracked down by a crashing defender. This time he actually cuts with decisiveness. 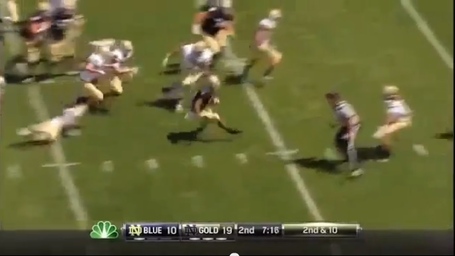 Here's GA3 with his left foot planted about to cut to his right and away from the defender. 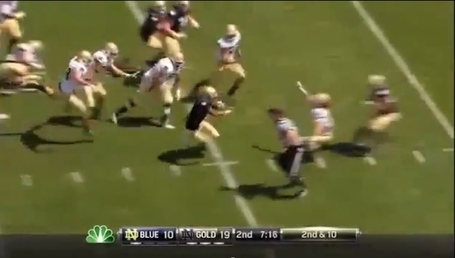 Boom! He's crossed over his plant foot and is now exploding off his right foot completely putting the defender off-balance and unable to get but a tiny piece of Atkinson. 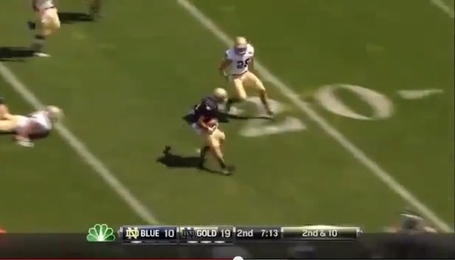 Seconds later he's nearly tripped up by a diving Calabrese and is put in a position where he loves to use the Stop & Shove move. It looks like he's going to try but no...he plants his right foot and cuts back hard. Notice how his hips are facing where the end zone pylon is? 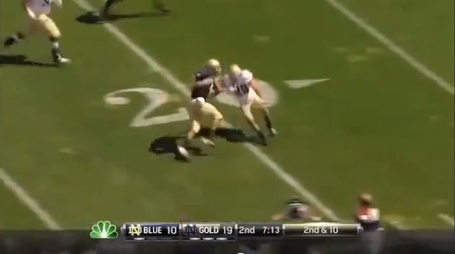 Now Atkinson has crossed over, swung his hips around, and is driving of his left foot to get up-field. The Stop & Shove move probably gets him 3 more yards with the chasing defenders so close but instead he gains 10 more yards. Poor ball security notwithstanding this is how he needs to cut more often.

For someone who is labeled a speed back Atkinson is a pretty effective inside runner when he gets adequate blocking. The first video is back to the 2012 BG Game and GA3 bursts through the hole very nicely. 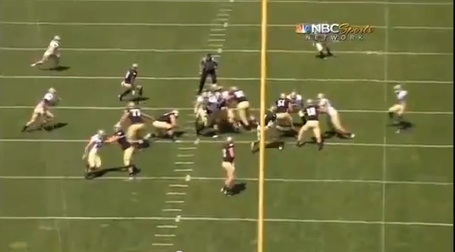 Just to the right of the goal post you can see Atkinson planting on his right foot. Moments later he zips through the hole for a nice gain.

The second video is against Stanford from 2012. Atkinson actually makes two nice cuts on this play. 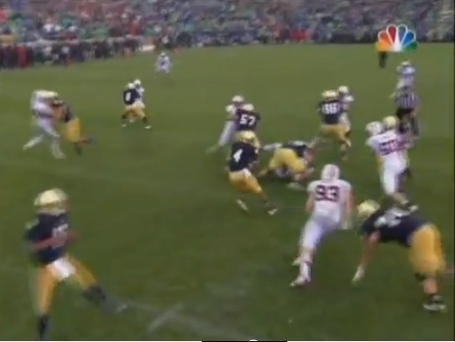 Here's the bigger and more important initial cut. GA3 then gets past the line of scrimmage maintaining his speed, makes a smaller cut back to his right, and then gets nice and skinny to pick up about 10 more yards.

Back to last year's Blue Gold game and Atkinson puts together both a beautiful jump-cut and a strong cut up-field. 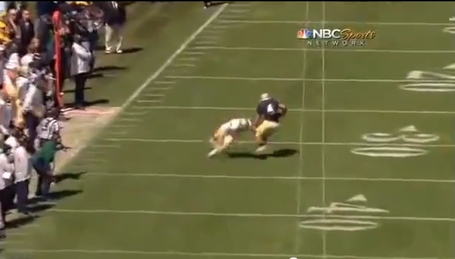 Here's the jump cut which works so well because he immediately performed it and shifted his momentum back to the right leaving McDaniel grasping for air. 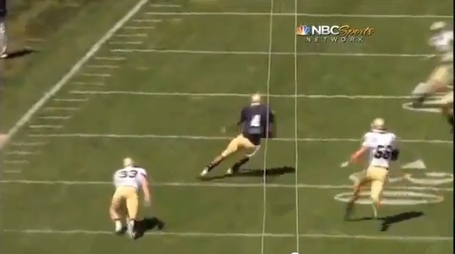 Here's his cut after making McDaniel miss. It's very decisive and he ends up making 2 defenders miss while picking up an additional 15 yards.

A lot is made about Atkinson running upright and not being the power back he perhaps should be at 210 pounds. Those are certainly legitimate critiques but in my opinion his difficulty making decisive cuts and working in small areas are his biggest issues. He's simply not a natural runner. He has tight hips, is below average at juking, and often panics when he's not in open space. If he can't fix these issues it won't matter if he's lowering his pads or not.

That sounds like there's little hope for Atkinson but the good news is that he's shown flashes of running like a natural tailback. He may never be a fluid and dangerous runner in all areas of the game but the question will be how much of those awkward instincts he can overcome.

His default mode in running outside zones and when lanes are blocked is to stutter, decelerate, and cut back in a different direction. This is a death knell for someone with elite speed. Even if he's not reading blocks perfectly and doesn't have the best vision GA3 is best suited planting his foot and getting up-field with authority. With his combination of size and speed the power will be there---always lowering his pads is simply fine tuning, grinding out a couple more yards, and preventing injury.

If he can improve his footwork and decisiveness---and I think he has from freshman to sophomore seasons---Atkinson will remain an integral part of the Irish running game. If it continues to be a problem and GA3 can't take advantage of his speed on a consistent basis he may forever remain just a backup with home run ability.