A week after Michigan knocked Notre Dame from their shiny #2 ranking 47-21, all looked lost as Notre Dame went into halftime against Michigan State trailing by 17 points.

The fact that Notre Dame was even within reach is much thanks to Brady Quinn, with a pair of 2nd quarter touchdown passes to McKnight and Samardzija; followed up by a 62 yard 3rd quarter strike to John Carlson (man he could run for a tight end).

Notre Dame was looking for revenge following the "flag planting" which Michigan State pulled a year earlier; but the revenge plans were looking slim as the Irish were still down by 16 heading into the 4th quarter following a Jehuu Caulcrick touchdown run.

Then, the wind changed direction, the rain came down even heavier, and Brady Quinn stepped up to mount a furious comeback attempt.

Quinn's first full drive of the fourth quarter was a pure evisceration of the Michigan State secondary. Quinn found Carlson on first down for 32 yards but was sacked on the ensuing first down. Quinn found Samardzija for another 12 yards, cutting it to 3rd and 5, and following an incompletion, went for it on 4th and 5. Samardzija caught a quick slant pattern and made a great individual effort to take it to the house, giving Notre Dame some much needed life in the 4th quarter.

Following an amazing strip and fumble recovery from Chinedum Ndukwe, Quinn was able to find Rhema McKnight on a beautiful 14 yard TD fade to the left side of the end zone, cutting Michigan State's lead to 3.

Of course, there were a bunch of mistakes that Michigan State made during this game to open the door for the Irish to comeback (just ask this guy - MAKE PLAYS!); but the reason they were in a position to come back after an abysmal first half was Brady Quinn.

The senior leader was able to keep everything under control and still put points up on the board, on a night when it could have been fine to just pack it in. But he did not give up and kept fighting, almost singlehandedly willing the Irish to get back into the game. He beautifully used the weapons he had at his disposal, and took advantage of everything the State secondary was giving him, resulting in tons of big plays, and hope for the Irish team to make it back into the game.

One of the greatest comebacks in Notre Dame football history, in a hostile environment, when all seemed to point to a promising season being lost in just two games, gave Quinn the stage to show just how he was able to will a team to win, and give even the Weis-led defense enough confidence to go out and put some stops up against the Michigan State offense.

If there's one away game as a student that I will never forgive myself for not going to, it will always be this one. I still have it as one of the top memories of my time at Notre Dame, my first time dancing in Stonehenge following a road victory - and I think I have Brady Quinn to thank for that. And I thank him for the Mike Valenti rant too. 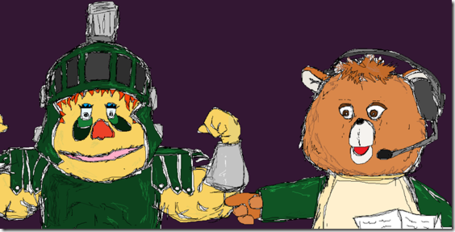