The staff at OFD allows a glimpse into the mind of a certain head football coach after some unsettling news about a certain QB's eligibility this fall.

Through a series of covert operations over the weekend, OFD was able to catch a glimpse of Head Coach Brian Kelly's notebook following the news that QB Everett Golson is suspended for the 2013 season. 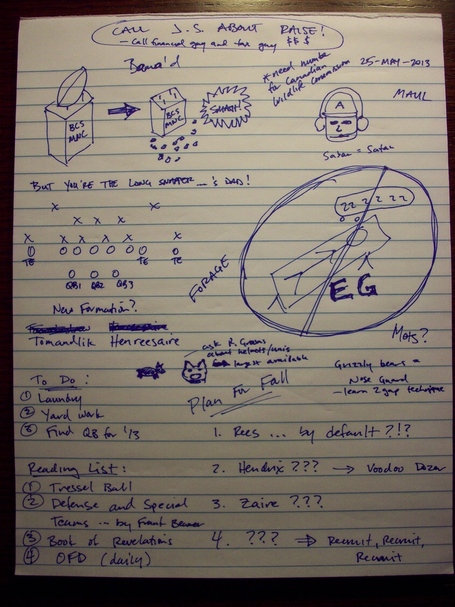 While we can't disclose EVERYTHING we learned (it is called leverage, people), some of the main points around the quarterback situation going into summer workouts have been summarized below:

1. Rees has to be the starter this fall. I don't like it any more than anyone else, but he appeared to have a little more zip on his passes in the BG game than previously shown.

The staff has to modify your offense appropriately-specifically, get him to stop the 20 sec pre-snap reads. Play an up-tempo, short passing, ball control offense. Rely on your running backs and get them the ball in space. Tell Rees that now and have them work on it time and time and time again this summer.

2. You know what you have in Hendrix, as he has spent 3 years in the program to date. He may fit well in certain packages or as a change-of-pace guy. Additionally, there is a potential 5th year safety blanket being developed for '14.

3. Go and Get Zaire ready. He is bigger than Golson, but probably less ready to play due to the offensive structure from high school. The staff was impressed with him in the spring and may have a shorter learning curve (remember, he was an Elite 11 QB from last summer). He may not be as quick or have the improvisational skills that EG has, but he has fewer bad habits to break. He could very well be your #2 guy this fall. Regardless, red-shirting is no longer an option and needs to see some snaps early.

4. Call Massa in your office the second he gets back on campus for the summer and get him ready to move back to QB. Some might say he should have stuck at QB, but there weren't enough snaps to go around for his development. You can't go into the season with only 3 QBs. Depending on what he shows, he is also a realistic option for '14 purely as a back-up safety net.

5. Go get your '14 QB recruit, now. Maybe two. You have to be honest with that one though--'14 is wide open. Golson should be back with 2 years of eligibility left with Zaire backing him up and 3 years left. You earn playing time at Notre Dame-it isn't given to you by default.

Trying to get coach on the phone to commit to #NDnation! I am trying to be a part of the program. Hoping I can get a hold of coach soon!

With the athletes on the team and guys like Michael Floyd and Tyler Eifert now playing on Sundays, you need to change the offensive priorities for Rees. Head coaches across the country try to manufacture this level of adversity to get their teams to respond. Here it is, dropped in BK's lap (yet again).

Realistically, this is no different than Golson getting injured in the spring and being put on the shelf-either way, he is not an option this fall. Fans have to realize that coaching staffs talk through these kinds of scenarios all the time-they already have an idea of what the plan looks like.

Kelly will play who he thinks has the best shot to win that week. We know this already and shouldn't be surprised by anything he will do.