Share All sharing options for: Hitting the Links: April 27th, 2013

As always starting elsewhere and ending in South Bend.

The new college football playoff and bowl games have been all over the news this week. I'm going to try and give you just a few links that explain everything pretty well.

Team Speed Kills breaks it down using the 2012 ranking as an example.

So 12 years from now how many teams do you all think it will expand to?

On Thursday at the BCS Meetings in Pasadena, Calif., executive director Bill Hancock said the playoff will remain at four teams for at least the duration of the 12-year deal, which goes into effect after the 2014 season.

As part of the playoff the Chick-fil-A Bowl is going to have to add the "Peach" back into its name. Chicken and peaches. That sounds like baby food.

So let me get this straight. If you start in Texas it is easier to drive to Florida than it is to California?

The Big 12 wants to have a greater postseason presence in Florida and get into more bowls that its fans can reach by car.

On the effect of the team, these are three guys all expected to contribute so it certainly would have an impact if they were suspended for a series of games. To say otherwise is foolish. None of the three are projected as starters, but all are expected to factor in when it comes to a two deep. Even if any aren't the immediate backup, their losses would hurt the team in terms of depth.

This is actually pretty amusing. Has anyone asked Leslie Miles about this? I have to think his comments would be pretty entertaining.

Though the charges do not appear to be serious, the arrest will no doubt be embarassing to Simon given that he's expected to be drafted sometime during Friday's NFL Draft middle rounds or Saturday's later ones -- CBSSports.com projects him as a Round 4 or 5 selection -- and even more so with the city of Eunice scheduled to celebrate "Tharold Simon Day" on Friday. Mayor Rusty Moody told KATC that a planned ceremony in Simon's honor would go ahead despite the arrest.

The guys over at Football Study Hall examine the use of offensive tempo in college football. Many of us are hoping to see Notre Dame play with an increased tempo on offense. With a championship caliber defense is that the right move? I think that is one of the more fascinating discussion topics out there right now. All of the "fastest" teams are pretty weak on defense. Or are they? How much does the opposition having more TOP affect the statistical bottom line for those defenses? Notice who the "slowest" team in the country is? Alabama.

This is a pretty fantastic long read. I think it is actually my favorite one thus far.

Go ahead — click on the YouTube video. Check out that quarterback with the long strides and the dragster speed and the rocket-fueled passes. If not for the grainy production value and those crazy high white socks, you would swear you were watching Colin Kaepernick running wild. But that’s not the 49ers dual-threat wunderkind starring on your screen. Nor is it Robert Griffin III, Cam Newton, or Russell Wilson. It is the player who could have — should have — revolutionized the NFL three decades ago.

The verdict of this O'Bannon case really could change everything. What do our resident lawyers think? In the short term I would advise any fans of the EA Sports "NCAA Football" series to buy the updated version of the game that comes out this summer. It might be the last one with the player likenesses...

"There is a wealth of common evidence from Defendants’ own documents and testimony that will be used to show, on a common basis, that EA, CLC and the NCAA colluded to use former and current" athletes’ names, images and likenesses "in their videogames without compensation."

Oregon, where you bust out new uniforms for the spring game because why not?

D-II University of Findlay introduces a interesting, but not so practical, helmet design | Dr. Saturday

Uniform guys talk to me about adding player names to the back of the helmets like they are doing here at Findlay. It looks a little silly to me. And what happens when you get that kid with a crazy long or hyphenated last name?

Rutgers sends a recruit a picture of its DC as a bodybuilder and it’s as awkward as it sounds | Dr. Saturday

The latest in ridiculous recruiting letters. This one is pretty creepy though.

The NFL Draft is upon us and nfl.com has a solid draft tracker to follow it online. When I turn on the TV I also prefer the NFL Network over tWWL. I would much rather listen to Mike Mayock than Kiper and McShay any day. That said now that Eifert and Te'o are off the board I won't be watching it nearly as close.

Here are a handful of pieces on the selection of Tyler Eifert and Manti Te'o.

Tyler Eifert to the Cincinnati Bengals Round 1 Pick 21 - One Foot Down.

This is a nice article on Te'o from Dan Wetzel with some good quotes from CBK.

"I called to cheer him up, but he wound up cheering me up," Kelly said. "He was like, 'Coach, I'll be fine, I'll get through this.' It turns out the call was more for me than him."

Okay that's quite enough on the NFL Draft for now. If you are looking for info on the other draft eligible Notre Dame players und.com has a nice hub HERE.

Some of the kickoff times for the 2013 Notre Dame season were released this week.

USC will be back under the lights in South Bend on October 19th. After the way that last one went I would almost prefer this game be played in the middle of the afternoon.

Check it out, tWWL thinks that this just happened.

We did get a kickoff time for one of the road games this fall.

Keith Arnold has an interesting take on how the staff is putting the current recruiting class together.

There are some that look at the current Irish recruiting class and see a group that’s behind schedule. But that’s almost missing the point. Every group is built with a different footprint, necessitated by different circumstances. Coming off a national championship appearance and carrying more momentum into next season than any since Lou Holtz, the Irish coaching staff finds itself in a very envious position where patience is truly a virtue.

Here's a good piece on everybody's favorite backup QB Tommy Rees. We haven't seen the last of Tommy. The only real question is how much of him we will see this fall. I suppose that depends on Golson's ability to stay healthy. That said you would be hard pressed to find a more experienced backup QB than Rees.

Over at HLS Lisa Kelly has a pretty cool Blue-Gold Game Photo Journal up.

UHND takes a look back at the "luck" involved in the 2012 Notre Dame season.

As Brian Kelly continues to bring in a higher quality athlete, the Irish should see the trend of things going their way continue, but that’s not to imply that it will always do so. Before we finally put the 2012 season to rest, we wanted to take one last look at some of the games in which the "luck of the Irish" seemed to play a part in Notre Dame coming out victorious.

One last thing. For any of you that missed it self-appointed OFD GIFmaster, and esteemed member of the commentariat, First Down Moses dropped a Fan Post this week about how to comment around here. If you haven't already you should check it out. 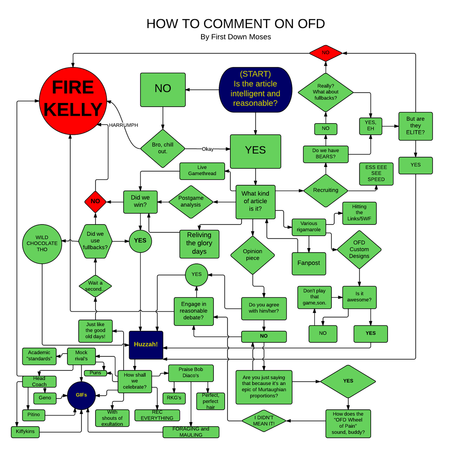