The story of one man versus Newtonian physics.

During the fourth quarter of the Blue-Gold Game on Saturday, Irish fans were treated to what is undoubtedly the future at quarterback for Notre Dame.

After freshman Malik Zaire hooked up with CJ Prosise for the game's only touchdown, Brian Kelly gave opposing coaches a taste of what to expect this coming fall.

While playing quarterbacks who can run is in vogue in college football, a few coaches have toyed with bigger QBs who are more rhino than cheetah. Urban Meyer rode Tim Tebow to two national championships at Florida, and Bob Stoop has had success with Blake Bell in short yardage situations at Oklahoma. But Brian Kelly took it one step further when he put his 350 pound nose tackle into the game at quarterback, and may have changed college football as we know it in the process.

That's right - Louis Nix III came onto the field at quarterback to attempt a two point conversion and barreled his way into the end zone. The skill and precision he showed made it clear that this was something the team has been practicing for quite some time. Let's break the conversion attempt down with our OFD Iso Cam and marvel at the beauty of Wild Chocolate. 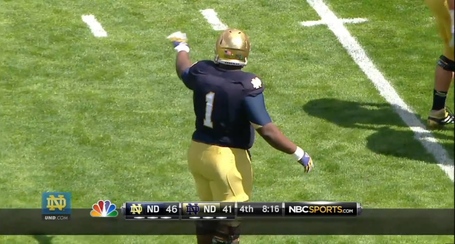 Nix breaks the huddle and starts directing his receivers. What do you call a 350 pound quarterback barking out instructions in the huddle? "Sir." 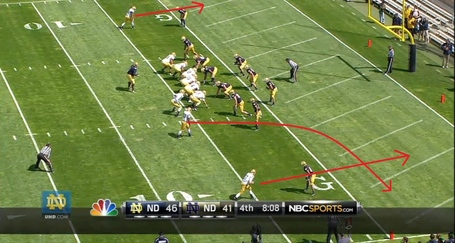 Nix lines up in the shotgun with an empty backfield. It's clear that you need to spread the field when you have a talent like Irish Chocolate playing quarterback. Packing the box only limits the room he has to work his magic.

The play call is deadly in its simplicity. The two outside receivers run fade routes, while the slot runs an out route to the sideline. Nix can throw a fade to the left, or use a high-low read to the right. The defense can either stack the box and gave Nix an easy throw somewhere, or spread out and ask some poor defender to tackle him one-on-one. That's what the Wild Chocolate package brings to the table. 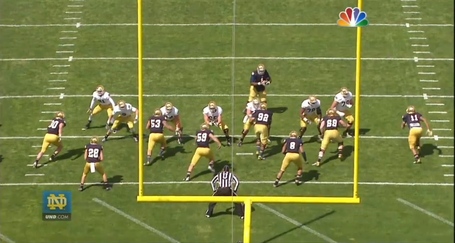 Nix takes the snap and immediately looks left for the fade. The coverage is good and Nix wisely moves on with his progression. This isn't his first rodeo. 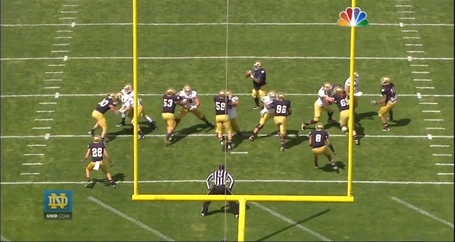 Big Lou turns towards the other two receivers to the right. Again, the coverage is good and Nix doesn't force a throw. 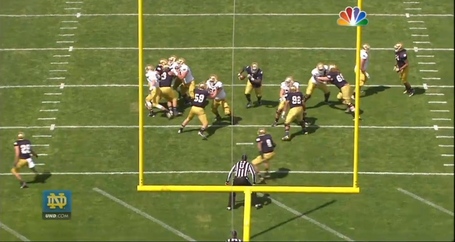 But in the defense's attempt to cover for Nix's probably awesome arm, they forgot that the big guy can move. Nix tucks the ball and runs through an alley up the middle. 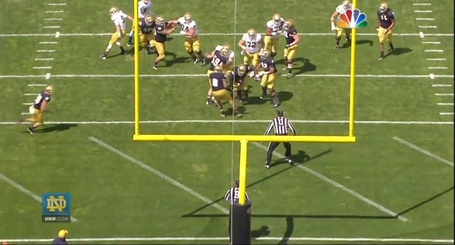 Only Kendall Moore stands between Irish Chocolate and the Promised Land. If Moore stands his ground and takes on Lou, a lot of things could happen, but it would probably end with Moore writing his memoirs under the title "A Million Little Pieces," except it would be true. Instead, Moore wisely gets out of the way of the barreling freight train that is Louis Nix.

Watch the play in its entirety here:

You never want to read too much into a spring game, but I think it's safe to say we'll see Louis Nix supplanting Everett Golson at quarterback and leading the Irish offense to new heights. It's also not unreasonable to think that Nix has to be the preseason Heisman favorite and almost a lock to be the number one pick in the NFL draft. In a few short years, 300 pound quarterbacks will be common, and everyone will remember Big Louis Nix as the trailblazer. That's just my prediction, though.

I do have to question Brian Kelly's decision to show his hand in the spring game and give opposing coaches film of his creation, but defensive coordinators around the country are probably too busy wetting themselves for it to matter.

And because great minds truly do think alike, NDTex at HLS also has you covered on LNIII's ascent into greatness.