Notre Dame came into this game against BYU ranked #9, following their narrow loss to #1 USC in the "Bush Push" game. With that loss against USC, the Irish were also fighting against a 4-game home losing streak. With new coach Charlie Weis and the 2005 Irish searching for their first home win, they decided to turn to an all-out passing attack to take advantage of a weak BYU secondary.

It was a great idea, as the Irish were featuring a scary receiving corps, anchored by two 6-foot-5 receivers in Samardzija and Stovall. While both were great all-around receivers, in this iteration of the Notre Dame offense, Stovall was the go-to possession and red-zone receiver, while Samardzija was a bit more of a deep threat. Pairing these two with a QB coming into his first truly great season in Brady Quinn resulted in some of the most high-flying offensive performances ever at Notre Dame.

Both Quinn & Stovall would set personal bests & school records in this game; Stovall becoming the first Notre Dame receiver to catch 4 touchdowns in one game, and Quinn recording his most efficient passing performance of his career. This game was one of many in 2005 that started to open NFL eyes to Quinn as a draft prospect in waiting. Maurice Stovall was lucky enough to have been on the end of 14 receptions from him in this game, including 4 touchdown grabs.

Stovall and Quinn got off to a quick start, connecting 4 times on a 7 play, 62 yard drive, which they capped off with a 10 yard pitch & catch. Quinn went 6-7 on the drive, and would continue at a similar clip the rest of the game.

Finally, with the game well in hand, Charlie decided to give us all who were going to read the play-by-play 8 years later in 2013 a little chuckle with this set of calls: 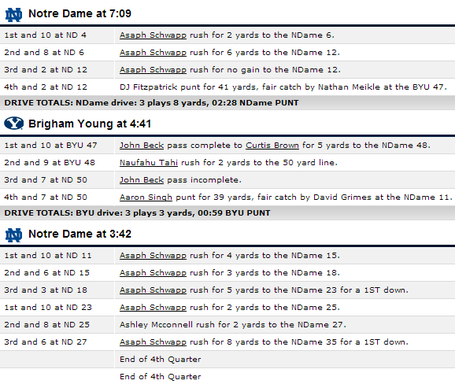