Brian Kelly will sign his 4th class at Notre Dame this Wednesday, and here's a bunch of random factoids about this class and more.

This Wednesday is National Signing Day for college football. We'll have an open thread all day as we sit and wait for the faxes to roll in. There will be some tension as we wait to see if we're Greenberry'd or if some recruit joins the Irish class out of the blue, but it's usually a lot more boring than it's hyped up to be.

FYI, Eddie Vanderdoes won't be committing until 5 PM Pacific time, so you don't have to be glued to your computer or phone on Wednesday morning anxiously awaiting his decision. That's coming after work for our west coast folks and after dinner for our east coasters.

If you want a little more in depth look at this 2013 class you can access our Recruiting Central Page with a bunch of pertinent links to past stories and what not. That page was created 11 months ago and will be seeing the last of its major page views over the next couple weeks.

Of course you can take a look at my baby the 2013 Big Board to see who's left of the uncommitted high school stars with offers from Notre Dame. We're only in on a couple uncommitted prospects but you can check out where everyone else is committed because there might be someone who defects over the next 48 hours---but it looks unlikely this time around.

Now, the Fighting Irish are known for their national recruiting.

Not bad states to focus on and sign some players, I think.

Also, shout out to Kerry Cooks and Tony Alford for working these areas of the country and coming up strong this cycle.

I see you, recruiters!

As this will be the 4th class of the Brian Kelly era (we're counting the 2010 transitional class because A) Kelly was on campus for 13 weeks prior to that group signing and B) 9 of the 23 gave their verbal to Notre Dame after Weis was fired) we've been able to get a good look at which areas of the country the staff has been targeting over the past 4 cycles.

Florida is a close second with 11 players signed.

The staff has shown no problems going back, back to Cali, Cali with 7 players signed.

They've held down the home turf with 7 players signed from Indiana.

An additional 6 players have been signed from the Tar Heel State.

6 players have also been signed from The Republic.

So...how many more players are going to be added between now and Wednesday?

Two, maybe only one though. The fine folks at Blue Gold Illustrated are saying there's room for 2 and even 3 more if the last player is truly elite---but the options are really running out.

Hey, don't forget that 5 players from this class already enrolled early and have basically signed their Letter of Intent.

Anyway, there's really only 3 players to focus on leading up to NSD this Wednesday. 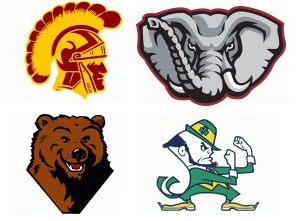 Vanderdoes is the nation's top defensive tackle. Over the past three weekends he's visited USC, Notre Dame, and Alabama. The safe bet, however, may be the UCLA Bruins. 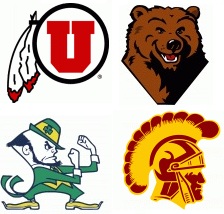 Fitts was all set to enroll early at USC but was told there wasn't room until June. That broke his trust and he's likely eliminated the Trojans. He has received visits from Oregon and Washington, and has officially visited UCLA, Notre Dame, and Utah over the past 3 weekends. Safe money once again is on the UCLA Bruins.

Folston has been committed to Notre Dame since January 2nd but did take an official visit to Auburn 3 weekends ago. Despite some rather strong words that he's sticking with the Irish this will be one verbal to keep an eye on.

If you haven't checked out Bud Elliot's National Signing Day 2013 Predictions for the Top 60 Recruits do so now. He's updating it literally every hour. Also, SB Nation's college football news main page is a good place to bookmark this time of year with all the recruiting craziness, last second flips, and more.

According to the 247 composite, the lowest rated recruit of this Irish class is middle linebacker Michael Deeb. With the way this kid works and how much he improved as a senior I wouldn't go sleeping on him though.

The top five players according to the composite are outside linebacker Jaylon Smith, safety Max Redfield, running back Greg Bryant, offensive lineman Hunter Bivin, and the aforementioned running back Tarean Folston.

Here's Jaylon Smith's commitment video from back in June, 2012:

This class has given themselves the name IrishMob13 and in a few days we'll turn our gaze at the next crop of recruits for 2014. Do they have a name yet? Some suggestions:

Don't forget, there are already 4 members in the 2014 Notre Dame Recruiting Class:

You'll notice there is a lot of red on the chart which isn't uncommon for this time of year. The injuries right now are, not including potential 6th-year candidate Jamoris Slaughter and his Achilles:

Who will be the NSD winners? How about Alabama, Florida State, Ole Miss, and UCLA?

The Bruins may be adding both Eddie Vanderdoes and Kylie Fitts mentioned above, plus Asiantii Woulard (No. 1 dt-QB) and Isaac Savaiinaea (No. 3 MLB).

How you should feel on Wednesday morning:

How you hopefully feel on Thursday morning:

Enjoy National Signing Day, everyone. And remember...Tyrone Willingham can no longer hurt us.