Hey Saban, you got a second? LOLOLOLOLOL

It's pretty well-known that for the better part of a century, various conferences have tried to claim the Notre Dame football team as a member, but have been unable to take our independence. I know that some folks will quickly counter this idea by pointing to the new 5-games-per-year agreement with the ACC that was brokered by Savvy Jack Swarbrick (probably while chuckling and emailing B1G Commissioner Delany with "Aw shucks Jimmy, I couldn't possibly accept such a generous offer!"). Fair point...but we don't have to worry one bit about winning or losing a silly conference championship game this week, so who's laughing now, chumps? (Hint: not Alabama.)

Past editions of TSW: The Red Army's Coup The Bard, the Duck, and the Tree Hey! Who turned out the lights? Moonwalking over cut-blocks Let's not point fingers Origin of Ridiculously Photogenic Cam McDaniel Punterrific job Shamrock Series shenanigans HORRIFIED CHEERLEADER Fun with Pez Reverend A. Carlisle

In any case, welcome to the last Trick Shot Wednesday of the regular season! We hope to keep this tradition rolling throughout the year in various forms (including an exciting one that's coming next week!), but aside from the week before and after the bowl game, this will most likely be the final ND football-themed TSW for 2013. But fret not--we haven't even started cracking open last week's sideline candid yet!

In honor of all our beloved seniors, we asked you all to explain what was transpiring on the sideline during the big Senior Day victory over BYU. Unsurprisingly, many people chose to analyze and offer suggestions for Coach Kelly's exquisite dance choreography, ranging from jazz hands and getting "jiggy" with "it" to variations of the Cha Cha Slide, including a custom version from our very own Tarean Folston. But then Fishoutofwater (winner of the legendary Cam McDaniel TSW) decided to take the road less-traveled by going inside the mind of junior QB (and General of the Red Army) Charlie Fiessinger, thus uncovering a potential coup at the QB position: 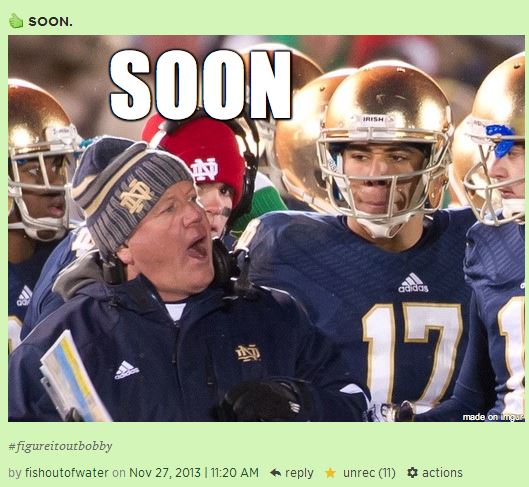 Looks like the Queen of the Commentariat has regained her crown--congrats, Fish! Since you now have DA POWAH once again, can you maybe tell Coach Kelly to wear a scarf or something? Sporting a precariously-perched tuque and an unzipped jacket is no way to go through cold football games. Also, ask young Mr. Fiessinger if he would be so kind as to not cause a ruckus by leading a Red Army takeover of the Gug or anything like that.

Since you guys know the drill by now, I'll keep this last regular-season entry short and sweet. This week, we have a snapshot at the top of the page that shows Bennett Jackson and Prince Shembo celebrating B-Jax's incredible 4th-quarter interception. An interception--especially such a crucial one--is always worth celebrating...so what was so amazing that it distracted their attention enough to point it out? Or was this some sort of elaborate celebration ritual that we've never seen before? We want to hear what YOU think is going on here!

As always, keep it classy in the comments and remember to vote with rec's. Go Irish!