Pinstripe Bowl Review: Make It There, Make It Anywhere

It wasn't pretty, but the 2013 Notre Dame season ended with a 29-16 win over Rutgers in Yankee Stadium.

Share All sharing options for: Pinstripe Bowl Review: Make It There, Make It Anywhere

A farewell to the 2013 football season, Tommy Rees and the rest of the Irish seniors.

The red zone struggles that plagued the Irish all year were in full effect Saturday afternoon. Despite having a size advantage in the trenches, a lot of pressure was put on Rees to find receivers. (He mostly did not, but there were a few drops sprinkled in as well.) With a 19-16 lead in the fourth quarter, Notre Dame went to the ground for the final thirty yards of the drive, culminating with the game-deciding Folston plunge.

Bowl games are always extremely weird due to the odd locales, weird start times, uncommon opponents, and long layoffs between games. If Notre Dame can get in the end zone on their first drive and T.J. Jones doesn't fumble the punt after Rutgers' first drive, it's possible there's an alternative Pinstripe where the Irish go up 10 or 14-0 and never look back. Instead there was a long pass, some missed opportunities in the red zone and a dogfight into the fourth quarter.

Two negatives that stood out: The Irish seemed surprised that Rutgers quarterback Chase Dodd could take off, as he ripped off a few first-down runs. To the defense's credit, Dodd was almost comically ineffective through the air, going 10-for-28, with many of those completions coming on a late garbage-time drive. The other issue was consistently putting the ball in Rees' hands in goal-to-go situations despite a massive size advantage in the trenches. There were some creative play calls to get the ball into the hands of wide receivers out of the backfield (the first Irish touchdown was a T.J. Jones rush), but it would have been nice to see a few more runs when Rees' red zone woes are very well documented after thirty or so starts.

With the score tied at 13 and just over three minutes remaining in the first half, Rutgers drove to the Notre Dame twenty and looked to take the lead. Kyle Flood reached into his bag of tricks and pulled out a halfback pass, which Russell picked off just outside the endzone. It was one of many great plays from the sophomore corner on the afternoon, who also had three pass breakups and two tackles.

The Irish came just shy of busting the 500-yard mark (494), and did so with a Notre Dame bowl record for number of plays. This kept the Rutgers defense on the field (time of possession for ND: 38:16) and when combined with the talent and size differential, allowed the Irish to put the game away in the fourth quarter.

The sophomore receiver tied T.J. Jones for the team lead in receptions with five, accruing 54 yards and serving as a steady safety option for Rees on a day where Jones was banged up with a sprained shoulder. If Brown becomes reliable on shorter routes to complement his ability to stretch the field (never forget Norman), he could ease the loss of Jones in 2014 and really become a go-to option for Golson among what should be a talented group of receivers.

A great play by Bennett Jackson (who had some struggles in his final game for the Irish) caused a deflection that Moore collected on a Te'o-esque snag at the Rutgers 22. The Irish only gained one yard before a field goal gave them a 13-10 lead. A touchdown there could have started burying the Scarlet Knights before the half.

Flag of the Game: The field at Yankee Stadium

The Irish should have felt right at home in the Bronx with the deplorable field conditions. Brindza going 5-for-6 (really 5-for-7, as one miss was absolved by a penalty that gave him another shot) is pretty impressive when you consider that he was essentially kicking on ice. 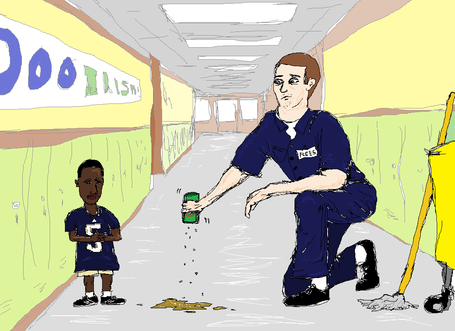 From our resident artist, Tommy managed to avoid turnovers and was the triggerman for an offense that nearly had 500 yards of offense. He even had a five-yard run! I will not miss watching him run our offense, but Rees stepped up when his school needed him many, many times over four years and ends his career with wins in Yankee Stadium (twice), the Coliseum, Cowboys Stadium, FedEx Field, and, of course, Notre Dame Stadium. It was a helluva career that took years off of our lives.

There isn't much left to say about the troubles here other than to say hopefully adding in the mobility of Golson (or Zaire, Kizer or Barnett) will open up the red zone playbook and increase efficiency. (And yes, I am aware the Irish weren't exactly aces near the goal line with Golson for most of last year, but that was freshman Golson.)

The Rutgers offense never really got going due to some nice work from the defensive line (4 sacks, 58 yards rushing allowed to the tailbacks), although there were a few brief spurts where tailback Paul James found some holes. As we discussed above, Dodd's continued ability to pick up yards on the ground was not super fun to watch, but it was more annoying than anything else.

On offense, Zack Martin won the MVP award for his contributions to the offense churning out 175 yards rushing while keeping Rees' jersey clean the entire game. It's likely the rushing yardage total would have been even higher if not for the terrible field conditions, as Folston's supernatural shiftiness was negated by his inability to not slip any time he attempted a stutter step or juke.

Max Redfield and Tarean Folston joined fellow freshmen Jaylon Smith and Steve Elmer in the starting lineup, which is hopefully the first of approximately 40 times they start together in an Irish victory. The other frosh to hit the field were Devin Butler, Will Fuller (one carry for three yards), Jesse Bongiovi (one tackle against his home state's university), Cole Luke, and Corey Robinson (one catch for ten yards).

This was an ugly game against a bad opponent on a Sherbert Land-style field, but despite some early troubles, Notre Dame won the second half 16-3 and notched their ninth win of a frustrating and confusing season. If things go like we think (hope?) they do in 2014 and 2015, it's possible we'll view this 9-4 record with Rees at the helm and a slew of injuries as one of the better coaching jobs of Brian Kelly's career.

With this win and Michigan's blowout loss to Kansas State Saturday night, Notre Dame reclaimed the all-time win percentage. Let's win on September 6, 2014 and stretch that lead out a little bit more.