Burgs, Pburns and Larz decide to let me take a spin in the film room to look at some offensive and defensive basics for the Notre Dame Fighting Irish men's basketball team. Let's take a look at ND's "one-big" and "two-big" offensive principles as well as two different zone looks the Irish demonstrated Sunday vs. the Big Red of Cornell.

Notre Dame handed Cornell their 15th consecutive defeat on Sunday. In a very complete and efficient performance, Mike Brey's team handled their business and managed to experiment with some newer looks. In this post, we'll take a look at how Brey coaches some basic fundamentals in his offense, and look at a little experiment he ran on the defensive end.

Demetrius Jackson made his first start for the Irish on Sunday. Mike Brey opened the game in a 1-big look with Garrick Sherman being surrounded by Jackson, Eric Atkins, Jerian Grant, and Pat Connaughton playing a "stretch 4" role. With the sheer talent ND has on the perimeter, I think you're going to see this type of lineup more often. While there will be times where some combination of Knight, Auguste and Sherman play together, the majority of the minutes at the 4 position will be logged by Connaughton and Austin Burgett.

This line-up put ND in a "4 out, 1 in" offensive set. Four perimeter players with a single post presence. While Garrick Sherman isn't a dominant force on the block, he does have an array of post moves and plays well with both hands. I know we'd all love to see him develop a bit more toughness and finish stronger, but he does make for an excellent passer out of the post, as indicated by his 4 assists on Sunday. 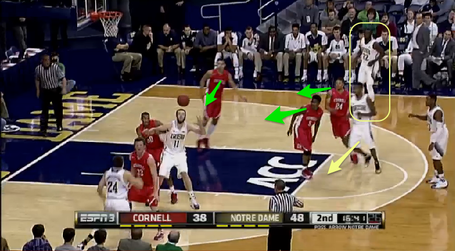 Early in the 2nd half, Jackson gets the ball to Connaughton on the wing, and Sherman has his man on his back. When the ball goes in to the post, you can see all 3 weak side defenders turn to face the ball. Grant (#22) is alone on the weak side as Atkins (#0) rubs his man across the elbow. After throwing the entry pass, Connaughton correctly cuts to the baseline to create space. 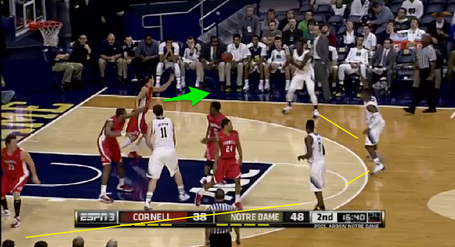 Sherman, turns to face, but not really looking to score. He's confident he's got a man on the back side, and Grant is there. Grant's defender hedged to the post and now has a long way to recover as Sherman hits the diagonal pass out of the post to a wide open shooter on the weak side. Grant has an easy look at a 3 that he knocks down to put the Irish up 13.

"Spacing" is a word you'll hear a lot of coaches talk about, and here's a great example of it with Pat Connaughton jumping in to the high post. This is an amazing look for the Irish. Connaughton's size and versatility make him a tremendous weapon at the high post position. He can look high-low to Sherman and has 3 shooters surrounding him. 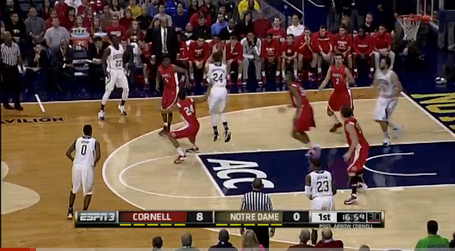 This is a great representation of the Brey "offense." I put it in quotes, because the Irish don't rely on an array of different sets or a specific motion pattern. Notre Dame's offense is founded on great spacing and maintaining consistent weak side options. Whether the Irish throw it in to the post or play screen & roll, there's always a strong-side corner option and a weak-side option to look for. Spreading teams out and putting them in to "scramble" situations is what drive's ND's offensive efficiency.

Game circumstances might dictate ND playing 2 big men at the same time. Here's a typical look when ND goes with three perimeter players and 2 bigs. Rather than focus on getting a touch in the paint with a post-up, the bigs here are looking to be screeners and create space. In the first shot, Tom Knight has offered Connaughton a rub screen on the wing to get him the ball while Sherman is coming up to offer a back screen to Atkins. 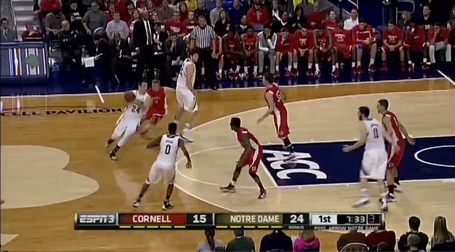 Grant is off camera, running the baseline from the near side to the far side of the shot. Knight turns his head and continues along the 3 point arc, ready to set a screen for the cutting Grant. 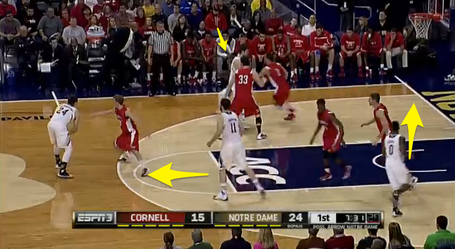 Grant is looking to be aggressive coming off the great screen from Knight while Sherman gives Connaughton a ball screen option if Grant doesn't come free. Atkins is headed for the corner to clear out the near side of the floor. 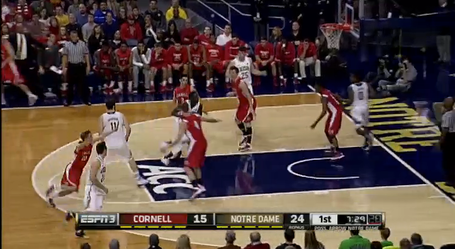 Here we can see, Grant recognizes that ND's spacing and screening action have left the lane entirely unguarded. Atkins' man is leaning the wrong way and Sherman's screen for Connaughton has occupied both their defenders. Grant is able to leverage his quickness and drives for the uncontested layup.

When you see Brey go to the "2 big" line-up with some combination of Knight, Sherman and Auguste, expect to see a lot of screening action from the bigs. In this case, the combination of Knight setting 2 down screens (the screener faces the basket) while Sherman sets a weak side back screen (screener faces away from the basket) creates a wide open lane for the dribbler. With Grant, Jackson, Atkins, and Beachem all showing tremendous ability to finish off the dribble, expect to see a lot of this look.

Mike Brey's "bread and butter" defensive scheme is man-to-man. The Irish play good help-side defense and with their versatile back-court players, tend to switch every perimeter screen very effectively. With the athleticism in the Irish back court, I hope we see even more ball pressure in that man-to-man defense, but you still need some other looks to keep the opposition off balance. Traditionally, for Mike Brey the "change-up" defense has been a 2-3 zone. While no one will confuse the Irish for Jim Boehiem's Syracuse 2-3 zone (great breakdown here), ND has effectively used this defense over the years. Here's a look at the Irish 2-3. 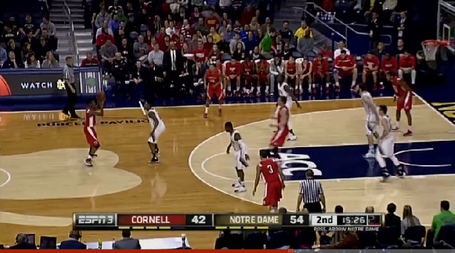 The Irish have the athletes to be very disruptive in this defense. Atkins and Jackson are up top to harass the ball with Grant and Connaughton as the baseline wings. With their athleticism and length, they'll be able to effectively recover to shooters when the Irish play this 2-3.

In this case, however, Cornell is showing the perfect look to beat the Irish 2-3. With great spacing in a very flat 1-3-1 set, Cornell is stressing the ND defense. Jackson has to respect #3 on the wing and Grant is pulled up by Cornell's wing man in front of their own bench. Sherman has to respect the man in the short post, so Connaughton should be coming up to handle the threat at the free throw line. However, if he does come up, Cornell sends #3 to the baseline for an easy skip pass. In this case, Pat is late to react and Cornell was able to get the ball into the "soft" spot in the zone behind the 2 guys on top. The Irish get in to trouble vs. disciplined offensive teams when they show the 2-3. In this case, either Atkins needs to supply stifling ball pressure to make that entry pass to the free throw line very difficult, or he needs to pack it back in and force the ball out to the wings.

Sunday marked the first time in recent memory the Irish also showed a 3-2 zone. Some people like to call this a 1-2-2 zone, but I save that term for half or full court pressure zones. The Irish were playing back in a more traditional 3-2 look as you see here. 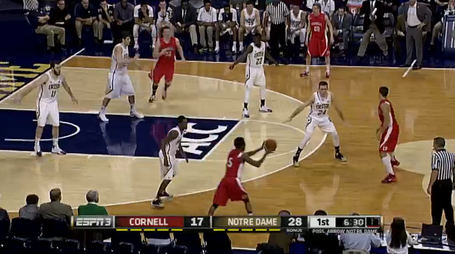 With their 2-big lineup, the idea of the 3-2 makes sense. Connaughton's length and ability to step back and deal with the high post also makes sense, but I find this to be a very difficult defense to use at the college level. In youth basketball, the 3-2 is very effective because you can pressure the ball and don't deal with many teams that can put 3 point shooters on both sides of the floor. You also don't deal with great passing from big men. On Sunday, Cornell was able to cut the Irish lead from 11 to 7 pretty quickly when the Irish showed 3-2. The announcers mentioned Brey was working on this in practice on Saturday, and from what I can see, it needs more work.

As you see in the screenshot, Cornell uses spacing to match the shape of the zone, but is bringing a man to the soft spot right in the middle on the ACC logo. In a 2-3, it is much easier to react to that pass, but in a 3-2, the tendency is to have everyone collapse to that spot. In this instance, Cornell brought the ball to the high post, then ran guys to the baseline for an open look. The Irish bigs don't have the athleticism to deal with the corner 3 in this defense and without well-defined block-out responsibilities, Knight and Sherman often struggle on the boards. I don't think we'll be seeing much more of the 3-2 this year.

ND put on a very complete performance on Sunday. Despite their struggles in the zone defense, they managed to hold Cornell to 67 points and only 44% shooting from the field. They also forced 10 turnovers. The Irish were most effective in their switching man-to-man looks. The help side defenders frequently got in to passing lanes, and many of those turnovers were converted into fast-break opportunities. It is great to see this team get out and run against a struggling opponent.

Offensively, despite a very slow start, the Irish heated up as the game went on. Ten ND players scored in the game, six of them in double figures. Led by "Good Jerian," the offense was incredibly efficient. Grant picked his spots, let the game come to him and ended on 8-10 shooting, including 2-3 from deep. He looked every bit the all-ACC performer against Cornell. It was an afternoon of solid offensive efficiency. Driven by great spacing and motion, the Irish offense mustered 54% shooting from the field, and 48% from behind the arc. With 28 assists on 38 made FG's and only 5 turnovers, the Irish are showing the offensive efficiency it is going to take to go in to the ACC/BigTen match-up with Iowa and the most daunting portion of their non-conference schedule. It was great to see it vs. Cornell, now we just need to see more vs. top flight competition.