The best Pinstripe Bowl preview you'll find on this website. 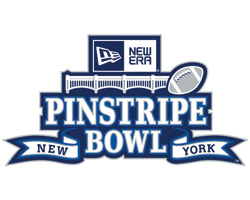 Here is the OFD preview of this weekend's final game of the 2013 season.

The Irish will be making their return to the new Yankee Stadium this weekend after playing Army there back towards the end of the 2010 regular season. Notre Dame also played in the old Yankee Stadium 24 times from 1925-69. While including other NYC venues this will be Notre Dame's 29th game played in the city of New York, although the 1921 game against Rutgers (the first between the schools) is the lone game in Irish history played on the island of Manhattan. If you remember from my series "1924" that game was played at the old Polo Grounds just across the East River from what would soon be Yankee Stadium.

As noted above this will only be the 5th meeting in series history between Notre Dame and Rutgers. This will be the first meeting since 2002 when the Scarlet Knights made a late November visit to South Bend. The cumulative score in the four meetings hasn't been kind to Rutgers; The Irish have shut them out in 3 of 4 games and have out-scored Rutgers overall 197-17.

Rutgers only gave up 94.58 rushing yards per game during the regular season, good for 4th nationally just behind Stanford. Obviously their schedule plays a factor in that number--as well as some pass-first teams who had no problem moving the ball through the air against the Scarlet Knights--but they are still ranked 18th overall in rush defense by Football Outsiders' S&P model. They kept a couple woeful rushing attacks under 1.0 YPC (Eastern Michigan & USF) and the rest of the schedule except Houston (211 yards, 5.55 YPC) was held under 4.19 YPC per game.

Former head coach Greg Schiano turned Rutgers around after a handful of rebuilding seasons. Following a 12-34 start Schiano was able to go 56-33 over his final 7 seasons, notching at least 8 wins in 4 of those seasons. Even with that turnaround Rutgers has still struggled mightily against ranked teams. In fact, the Scarlet Knights 20-3 victory over No. 25 Cincinnati during Schiano's last season in 2011 remains the program's lone win since 2007 over a team that finished the season ranked in the AP Poll. They are 1-12 over that time span and currently 0-3 versus ranked teams in 2013.

The senior from South Carolina has had a Tommy Rees-type of career. He became Rutgers' starting quarterback 4 games into his freshman season, lost his job in the middle of his sophomore year only to reclaim it towards the end of the year, only to lose the job again as a junior in 2012 when he threw just 1 pass.

Dodd came into 2013 as the backup once again to Gary Nova, only playing sparingly this fall, but stepped up and started the last two games of the season as Nova got benched. Nova completely collapsed in his last 5 starts (988 yards, 50.9%, 5 TD, 10 INT) and Dodd looked strong enough in Rutgers last game (19 for 24, 179 yards, 2 touchdowns) to earn the start in the bowl game.

The redshirt sophomore began the season on fire racking up 573 yards in Rutgers' first four games but he broke his fibula against Arkansas and missed the next 4 full games. When he came back he wasn't the same runner. He averaged 7.3 yards per carry in the first four games but only 3.8 yards per carry over the final 4 games. James, who barely played in 2012, also dealt with a sprained knee suffered in the Scarlet Knights' second to last game. He should be healthy and ready to go in the bowl game.

Longa is a redshirt freshman who made a huge impact in his first season in college leading Rutgers with 111 tackles. As part of an active group of linebackers he also chipped in 7.5 tackles for loss, 3 sacks, 3 passes broken up, and 2 forced fumbles. In Rutgers' 4-3 scheme Longa is their middle linebacker.

The junior from Mechanicsburg, PA is in his third year of playing and first as a full-time starter. He's second to the aforementioned Steve Longa in team tackles with 89 and has totaled 7.5 tackles for loss, 2 sacks, and 3 quarterback hurries. Snyder plays on the weak-side of the line of scrimmage.

I'm all for exploiting Rutgers' weaknesses and hoo boy does their pass defense stink. They've allowed at least 300 yards passing in 8 games, surrendered 31 touchdowns through the air, and California is the only other major conference team who gave up more passing yards during the regular season. According to the S&P rankings the Rutgers pass defense is 101st in the country.

So take advantage of their pass defense but let's keep things fairly balanced against a team playing without its defensive coordinator. No need to lengthen the game and make the offense easier to defend. Rely on the strength up front, get yourself a win, and get back to South Bend.

This isn't as big a worry as it appears with an 8-4 ranked team playing a mediocre .500 team in a middling bowl game. Brian Kelly has done a good job getting players prepared and motivated and TJ Jones, Zack Martin, and a handful of senior leaders add more trust that the team won't simply go through the motions.

Still, I'm curious to see how the team reacts if there's bad weather, a couple breaks go against them, or Rutgers jumps out to an early lead. They've typically fought back hard in situations like this during the regular season--will they in an exhibition game?

This is always a concern for every football team. Normally it would be less important against a team like Rutgers who is -9 on the season in turnover differential (tied-113th nationally). However, even though Notre Dame has coughed up the ball 10 less times on the season compared to Rutgers (the Irish are tied with Wisconsin for the least amount of fumbles lost, FYI) they are still -3 on the season due to an inability to cause turnovers on defense.

While Notre Dame has been great at not fumbling they've also been terrible (tied-120th) in forcing fumbles. This isn't the time to be losing 3 turnovers and hoping the Irish defense bucks a season-long trend of being unable to force their own turnovers.

Rutgers' offensive line is fairly experienced and remained quite healthy all season long. At left tackle is massive redshirt sophomore Keith Lumpkin (6-8, 315) in his first year of starting and has been on the edge all season. So too has been junior Kaleb Johnson (6-4, 305), a freshman All-American in 2011 and all-Big East performer in 2012.

At center senior Betim Bujari (6-4, 295) returns from 2012 but has missed 5 games this season with a couple different injuries. In his place fifth-year senior Dallas Hendrikson (6-2, 290) filled in and has played well. Hendrikson is expected to start against the Irish.

Right guard is manned by redshirt freshman Chris Muller (6-6, 300) who has started every game except for the opener. At right tackle is redshirt junior Taj Alexander (6-4, 290) who has missed only a few games this season. Fifth-year senior Andre Civil (6-3, 285) was a starter in 2011 but has been mostly a backup since filling in at tackle and guard this fall.

The Scarlet Knights rotate about 7 players in their 4-man front on defense. Senior Marcus Thompson (6-2, 260) is back as the defensive end starter from 2012 and had a really nice fall with 46 tackles, 7.5 tackles for loss, and 5.5 sacks. The other player up front who has played very well this season is sophomore Darius Hamilton (6-4, 260) at defensive tackle totaling 42 tackles, 10 tackles for loss, and 4.5 sacks.

The other starters are redshirt sophomore Djwany Mera (6-4, 260) at defensive end in his first year on the first team with 32 tackles, 5.5 tackles for loss, and 2.5 sacks plus fifth-year senior Isaac Holmes (6-3, 280) at tackle coming into the weekend with 22 tackles and 4 pass break ups.

With a few small changes to the roster (pretty much just slightly better play at quarterback, running back, & safety) with more health everywhere) I have no doubt this game would be a blowout win for Notre Dame. Then again, if there were those changes the Irish aren't sitting at 8-4 going into bowl season.

That's my roundabout way of saying this won't be a blowout victory!

As I said I like Kelly's ability to get teams prepared and mentally ready but I do worry about the players' focus after being wined and dined in the Big Apple for 5 days. I'm also a little concerned about losing both coordinators and I think this is going to hurt the Irish (more defensively) in this game. True, Rutgers' pass defense has been abysmal this year but I'm not banking on a 350-yard performance by Tommy Rees.

I'll be surprised if this is anything other than a painfully conservative game played by both teams. If the Scarlet Knights can protect the ball and get a solid game out of a healthy Paul James their offense could be as productive as it's been in many weeks. Dodd is also a little more athletic at quarterback which helps Rutgers and they might install some more spread-type elements to open up the offense a little more after things got real stale in the middle of the season.

As you can see in the above table Rutgers is pretty terrible across the board. Are there really only ~30 teams worse than the Scarlet Knights in the entire country? I don't think so but there the numbers stand.

I would count on Notre Dame throwing a lot in the first quarter, gaining a decent lead into the second quarter, and down-shifting into a run-heavy second half. Since the Irish have a unique way of eating clock while still throwing the ball regularly possessions should be limited and the overall score pretty low.

Let's say Notre Dame leads the game 27-10 late and Rutgers picks up a touchdown with a few minutes left to make the final score a little closer than it really played out.