Welcome to another weekly installment of Trick Shot Wednesday, everyone! As you've probably noticed, our site has been flooded in the last few days with news of DC Bob Diaco's departure to UConn, three solid recruiting commits, and ND Men's Soccer winning their first-ever national championship. In light of this inundation of jubilation, as well as the hectic finals week that our student-readers are slogging through, we'll try to keep this week's piece short and sweet.

In last week's contest, we trotted out a few photos that coincided with the deep freeze in South Bend. All of them featured NFL grounds crew members braving howling blizzards to clear off a few painted white lines so that a few 320-pound men could run around a bit. The top-voted comments for each photo were written (respectively) by Jim Miesle ("I swear my agent said 'practice squad', not 'grounds crew'..."), honorable mention to IrishColts17 for my personal favorite ("Man, these halftime fan contests are really getting out of hand..."), and Eric Murtaugh's impersonation of our resident Canadian, Larz ("Good curling form, eh!").

But here at One Foot Down, there are times when someone comes along and reminds us that yes, a few most of us have real lives outside of this site. In this case, our very own occtipus decided to bring back an old TSW favorite to help announce the newest addition to the Notre Dame fanbase (and the One Foot Down commentariat): 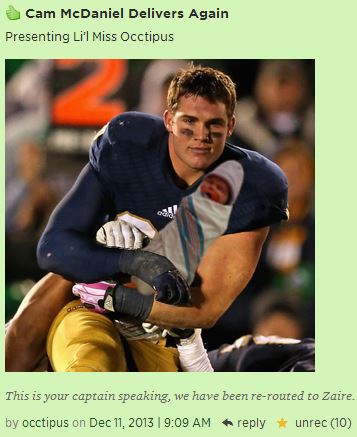 ...I'll give the ladies a few moments to recover from their Ridiculously-Photogenic-Cam-McDaniel-Carrying-A-Newborn-Baby-induced swoons.

I was like, "Okay, I guess that's kind of a clever photoshop and everything...but simply posting a cute baby photo isn't going to automatically win you any--" 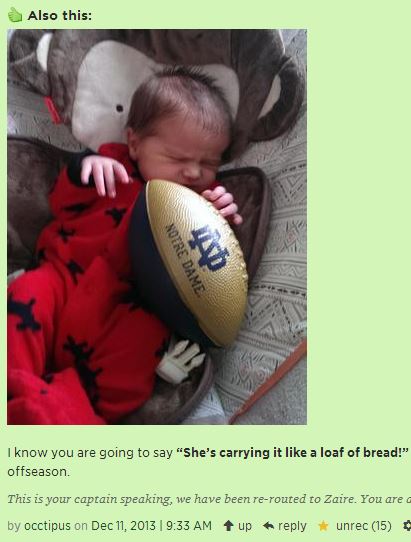 ...okay man, now you're just being totally unfair. I'd bet that Li'l Miss Occtipus' (Miss Occtipa's?) adorableness just elicited unmanly squeaks from at least 90% of a commentariat that prides itself on talking about FOOTBALL and BEARS and MAULING and TRADITION and oh who am I kidding, I totally did it too. Congrats on the TSW win for you and the little one, occtipus--let it never be said that football and cute babies don't go together here at OFD! Oh, and fishoutofwater? Due to her lack of combine results and scarce game film, L.M.O. will have to be content with sole ownership of the title Princess Of The Commentariat for now...but she'll be competing for your title soon enough!

For this week, some of you may be surprised that I didn't choose a photo from the soccer team beating Maryland for the national title. Rest assured that this is certainly not a statement against the #1 team in the land! Let me explain...Remember that GIF I posted to celebrate the end of the 2013 offseason? You know, the one of the Army officer whipping the crowd of West Point cadets into a frenzy?

Well, as I was perusing the photo options for this week's TSW, I happened to spot [what eventually became] this week's header photo (click here for full size) and instantly realized the officer as the same one in the GIF! For the heck of it, I asked a few West Point folks if they knew him...boy, did they.

According to my shadowy sources, this enthusiastic officer's name is Colonel Daniel Ragsdale (affectionately known as "The Crazy Colonel" by legions of West Point cadets), and for years he has been a fixture at all kinds of Army sporting events--sort of a "West Point Leprechaun", if you will (though way less...leprechaun-y). He is perhaps best-known for his nationally-televised antics in firing up the Army faithful (I'm told that the TV cameras now try to find him several times per game), and he usually does so without puny cold-weather accessories like "jackets" or "hats". And, like most great college legends (especially at ND), the cadets immortalized him on their version of "The Shirt" a few weeks ago. Though Colonel Ragsdale's Army team did not prevail against Navy this past Saturday, I felt that his passion and exuberance in this photo would be a fitting tribute to the end of the 2013 CFB regular season (as well as something that could teach stodgy and harrumph-y Notre Dame fans a thing or two!).

So once again, I pose a question to all you would-be caption artists: what exactly is the Colonel getting fired up about? For our purposes, let's assume that he's also a Notre Dame fan...so for all we know, he could be offering some boisterous insight on either our annual pasting defeat of Navy or our heinous lack of fullbacks. Or he could just be announcing that his hat is for sale. So that's where all of you come in--give us your own interpretations in the comments, and vote for your favorites! As always, enjoy yourselves, and Go Irish!

NB: Remember how I said last week that there would be a TSW announcement this Friday? Well, it's been pushed back to next Monday because of reasons. But don't worry, it will definitely be worth the wait!